Three decades ago, two stoner musicians designed an iconic product whose cheap imitations sold into the billions. But today, nobody knows their names

Thirty years ago, in a small Seattle apartment, two friends smoked some weed, knocked back a few beers and talked the night away. That was tradition for Richard Sclafani and Peter Cicero, two best friends working middling jobs to supplement their music careers. But on this particular Friday night in January 1990, Sclafani and Cicero’s doodling would change New Year’s Eve celebrations forever.

“We were always coming up with ideas — they’d just pop into our head and we’d scribble them down — but we’d never do anything about them,” Sclafani tells me. “We’d somehow gotten onto drawing novelty glasses and had ideas sketched out. Pete drew the number 2000 and put a couple of eyeballs inside the zeros. I took one look at it and had this vision of the year 2000 in Times Square, and all the people wearing these glasses. It was really a vision.”

“Those were literally the very first New Year’s glasses ever made.”

Sclafani and Cicero immediately knew they had something, but the year 2000 was still a decade away. “Then Pete draws the year 1991, and we realize, ‘Gee, you could use that too! There’s a circle for the eyes!’ That’s when we really got excited and started dancing around the room,” Sclafani laughs. “I don’t think either of us slept for at least a few days after that.”

Within days of their thunderbolt, Sclafani took “a big piece of green wire” and bent it into the shape of 1991 glasses. Next up? All the hard stuff. Not only did they need to learn how to navigate the U.S. patent system, but they also had to learn how to make, sell and ship the glasses at scale. “We had to learn everything as we went, which meant very long days,” Sclafani says.

For the two musicians living hand-to-mouth, this wasn’t an easy decision. Without any kind of disposable income, Sclafani racked up $30,000 in credit debt to make the first 1991 mold and get the operation off the ground.

“We did everything to make them as popular as they were.”

“People who knew the patenting system told us from the start that there would be no real way to protect them from rip-offs,” Sclafani explains, adding that, in hindsight, the entire U.S. patent system felt like a scam. “They make you jump through a lot of hoops and spend a lot of money to get the patent, and once you get it, they flood you with offers to buy ‘gold-plated plaques to frame your patent!’ but they never mention the fact that when it comes down to it, you’re not going to be protected at all.”

Nonetheless, Sclafani filed designs for glasses up to 2004 (design patents last 14 years) and got to work. “It was all held pretty close to vest, keeping it under the radar of the big corporations,” Sclafani tells me. “I found a guy in Seattle who could do the molds, and we shipped ’em out of my basement that year.” 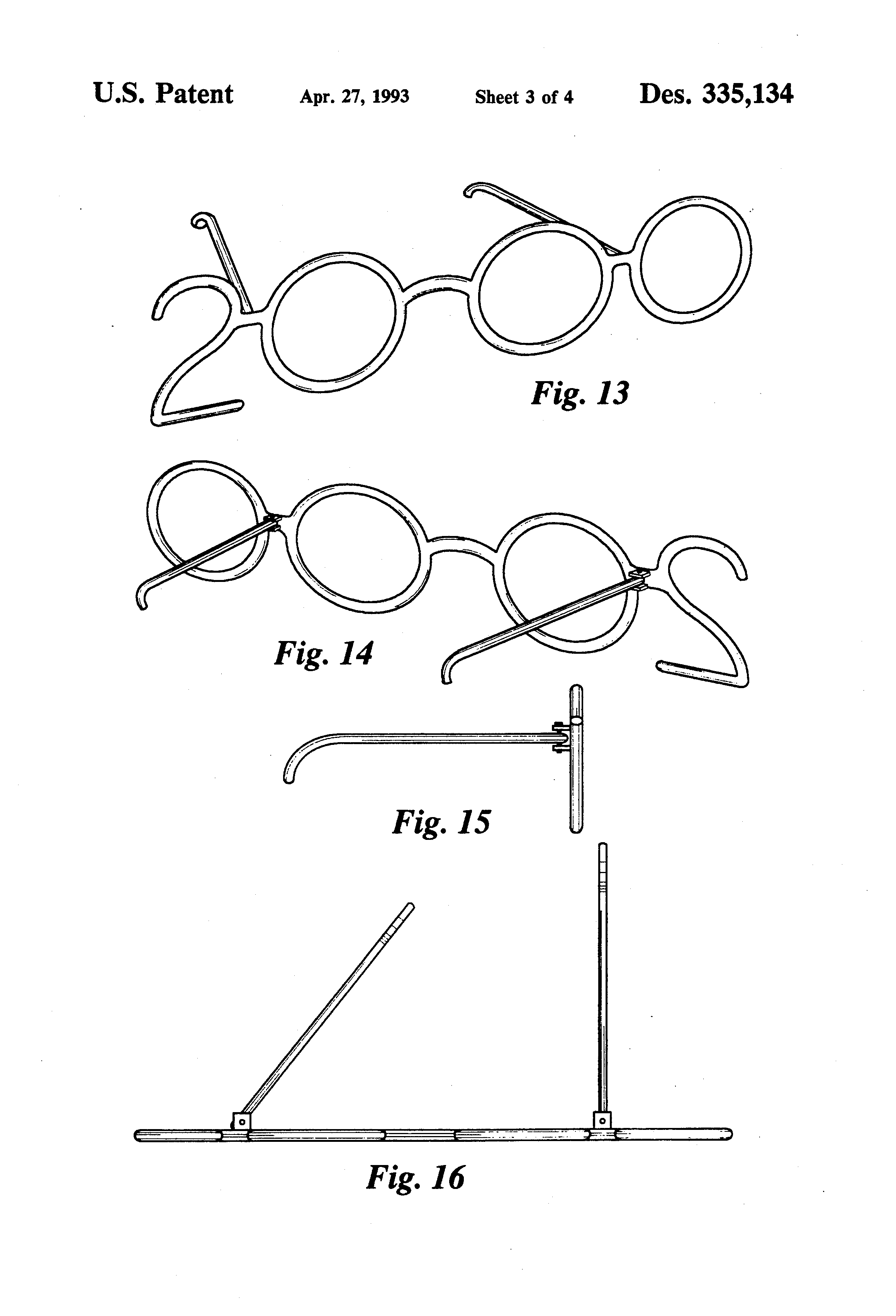 Armed with 10,000 1991 glasses, Sclafani and Cicero now needed to spread the word. “I bought a list of all the casinos in the country, and shipped free samples to thousands of them. It was kind of expensive, but it was a good way to go. Because the next thing you know, they called me and ordered 300 for their New Year’s party.”

Sclafani also went door-to-door, selling boxes of his glasses to local vendors as well as giving a few pairs to local news stations. And, of course, to follow through on his original vision, he enlisted his nephew to hawk a few pairs in Times Square. His friends also pitched in. “They wanted to help out, so I’d give them a box of 1,000 glasses, and they’d go home and pack them for me,” he says.

By 1998, however, that was no longer possible. “That’s when we got really busy, and I probably had 100 people packing the glasses. Because by then, we were shipping 30,000 of them.”

“I was selling them to just about every casino in Vegas, Tahoe and Atlantic City.”

Business boomed for nine solid years, each year bringing more and more visibility. “In 1992, the New York Daily News published a picture of all these people in Times Square wearing the glasses,” Sclafani says. “Then there were pictures of people wearing them all over — in the news, on Saturday Night Live, everywhere. It was an absolute thrill.”

“There were also a bunch of people who hated the glasses for some reason,” he laughs. “They thought the glasses were just some kind of capitalist, terrible thing. It was half tongue-in-cheek I guess, but they’d rant on some website about how they were the symbol of a corrupt society.”

Love ’em or hate ’em, Sclafani and Cicero’s design became synonymous with New Year’s. “We were the only ones selling them for about nine years. Then I started seeing signs that they were being made in China,” Sclafani says. “The first sign was when Newsweek did an article on China, and in that article was a picture of people in China wearing glasses that looked like ours, but I could see that they weren’t. That was the first sign of the end.”

With the year 2000 on the horizon, Sclafani found himself faced with a rising tide of knockoffs — and the most anticipated New Year’s Eve in memory. “It was a big, big deal. The new millennium, Y2K, everyone was excited for this New Year more than any other,” he explains. “And that’s when the thieves decided it was time to do their thing.”

“All of a sudden, the market was flooded with rip-offs. There were so many that every time I came across one in a store, I’d buy it and put it in a box — I called it my box of bad news,” Sclafani says. “But there was nothing I could do about it. China doesn’t respect our copyright laws, and the big toy and novelty corporations know they can get away with it.”

Even though Sclafani knew being ripped off was inevitable, he says he never imagined being ripped off on such a grand scale: “I figured, ‘I’ve got all these customers, and they’ll be loyal to me.’ But I was really wrong about that. They dropped me like a hot potato.”

Even the local Seattle shops that bought his glasses for years didn’t return his calls. When he went to see why, he found knockoffs on their shelves. “That was a gut punch,” he says. “But what are you going to do? The knockoffs were so cheap that they couldn’t resist.”

But Sclafani didn’t quit — not yet. Sales diminished over the decade, but he kept selling the glasses. Finally, he decided 2009 would be his last year. Besides, he knew the designs would suffer: “2010 didn’t work well at all.”

Kinda hilariously, the companies that ripped off Sclafani and Cicero are hurtling toward an interesting challenge: After 2020, there aren’t many opportunities for seamless glasses designs.

Sclafani’s confident, however, that the remaining manufacturers will find a way to manage. “The same thing happened after 2010, but that didn’t stop them. People came up with a lot of different ways to get around it — for example, they just made it a big fat 1 with a hole in the middle. But they were nowhere near as pretty as ours were. Ours were so nice and symmetrical. So they’ll probably just put a big 2 with a hole in it — something like that, but it won’t look good.”

“I can look back and say I made millions and millions of people smile.”

Millions of people still wear New Year’s Eve glasses, but few know the men behind them. Not that it bothers Sclafani: “There was nothing like them before, and when I see somebody put them on and start laughing, it’s all worth it. They just really made people laugh out loud because it was such a goofy, stupid idea. But it worked!”

Unfortunately, Cicero passed away four years ago, Sclafani tells me. “He was my best buddy for 35 years and I miss him every day.” But there’s no doubt that his (and Sclafani’s) place in history is sealed (true credit be damned). “We never thought it’d go far beyond Times Square, but I wouldn’t be surprised if billions of the knockoffs have been sold around the world,” Sclafani says. “And if each one of those made somebody smile, then I feel like Peter and I did good.”