When news broke that Jeffrey Epstein had hanged himself in a Manhattan jail cell, I braced myself for the memes, conspiracy theories and Twitter punchlines. And boy, America did not fail to disappoint.

There’s a reason why a wildfire is an apt metaphor for virality on the modern internet: This stuff ignites and spreads without much discrimination of where or how far. And the mysterious suicide of Epstein, a powerful Wall Street financier who lived a second life as a pedophile and sex trafficker (with a 2008 conviction and a fresh arrest for trafficking this year), proved too perfect a fuel for America to resist.

Epstein was always a juicy subject, with lots of speculation as to whether a “cabal” of rich, politically connected characters were involved in Epstein’s forays into some truly heinous alleged crimes, including sex slavery. His death, however, threw the whole plot into overdrive. For a split second, our divided nation came together in breathless support of a wild but kinda-sorta possible idea: The suicide was staged. Epstein was killed. 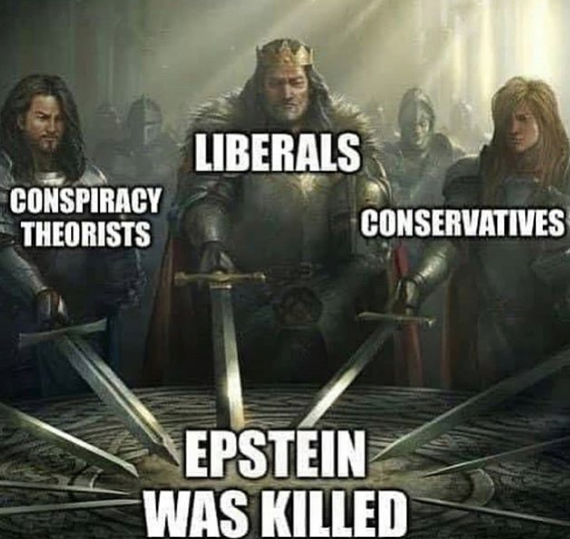 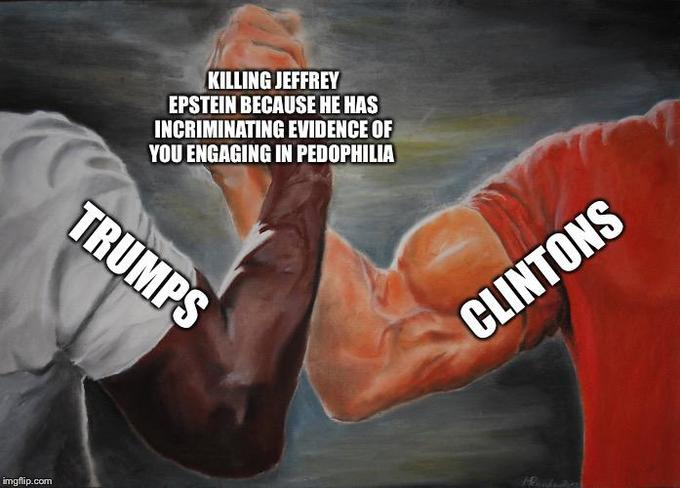 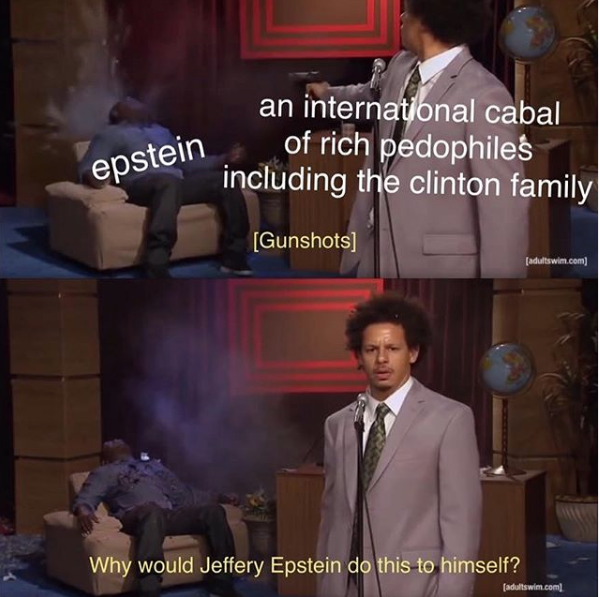 Because this is America in 2019, however, it didn’t take long for the political divide to shatter the Epstein gag into a million kaleidoscopic pieces, each reflecting its own batshit perspective. The hashtag #EpsteinMurder trended worldwide on Saturday, buoyed by public figures and private nobodies from all corners of the ideological spectrum.

A MAGA-chud comic notched 151,000 likes with a tweet-rant suggesting Bill Clinton, an acquaintance of Epstein who once flew in the latter’s private plane, had him killed because he had incriminating evidence. It apparently was convincing enough for President Donald Trump to retweet, but progressive voices clapped back, noting that Epstein had also, uh, hung out with Trump a bunch (and was maybe privy to an alleged rape by Trump). This escalated into a brain-melting, hyper-gamified battle in which dueling sides tweeted in order to get one theory trending over the other, birthing the hashtags #TrumpBodyCount and #ClintonBodyCount, blending irresistible ideas about the unchecked powers of political leaders and real-life political killings and disappearances.

Here’s the thing: There is cause for serious concern about how Epstein died and why no one was watching him. The 66-year-old was, after all, found “semi-conscious” in his cell in a fetal position with marks around his neck in late July, and put on suicide watch immediately afterward. Officials and prison experts remain “stunned” that Epstein would be taken off suicide watch, but that’s what happened in the lead-up to his death. An autopsy has been performed, and sources with knowledge of the procedure told NBC News that “no foul play has emerged.” “I was appalled, and indeed the whole department was, and frankly angry, to learn of the [Metropolitan Correctional Center]’s failure to adequately secure this prisoner,” U.S. Attorney General William Barr said on Monday.

But with every tweet, the web of facts, speculation and bad-faith lies got more and more tangled. It wasn’t good enough to believe that this was merely another case of an unprepared American prison facility with under-trained officers screwing things up — even though that happens all the time. The “body count” theory is this suspicion taken to its conclusion, in which someone like Bill or Hillary Clinton is willing and able to get their hands dirty on multiple hits. I have yet to see any real effort that explains how a Clinton could manipulate prison guards to look away from a suicide, let alone actually kill Epstein, as some people suggest. But the devil isn’t in the details here. The logic more or less concludes with the fact that some people are powerful and have money, giving them the power to kill and cover-up, apparently with impunity (the Clinton body count features dozens of people).

It’s the same exhausting cycle we went through with claims that Hillary had “sold uranium” to Russia and controlled all the levers to make the deal happen, despite reams of evidence that it was overseen by a bunch of people who were not Hillary. That’s why this conspiracy around Epstein feels, in many ways, like a cut-and-paste hackjob of so many conspiracies before it. Such reactions are rooted in our cultural imagination, too: I mean, there’s literally a hit TV show in which analogues for the Clinton family engineer killings and huge betrayals in order to steamroll their opponents.

Yet, back in reality, we see prison deaths go down in much more obvious ways. And Epstein certainly fit the model of someone at risk of committing suicide behind bars. A 2015 report from the Bureau of Justice Statistics found that detainees in county jails die of suicide at a rate triple of those who are serving sentences in state prisons; the report notes that the “shock of confinement” when individuals first realize they’ve destroyed their lives is a major factor in the difference. The report also found that suicide rates are even higher for detainees who have not yet been tried, like Epstein. (He died shortly after a trove of documents about his activities were released, but before trial.)

People do get killed in prison as retribution, but staging a suicide isn’t simple, especially given the fact that Epstein was left without a cellmate at the time of his death. Usually, it’s more like what happened to 89-year-old notorious crime boss Whitey Bulger, who was viciously beaten to death after being transferred from his longtime prison home to a new facility. Observers speculated that the incident could be mob revenge for his work as an FBI informant, noting that a rival mafia enforcer may have led the deadly blows.

The truth of the matter is, people die in horrible, inexplicable ways in prison all the time. This is a fundamental reality in our justice system, and there’s some seriously sad irony in the fact that we needed an old, obscenely rich white guy to hang in order to spark some semblance of national discussion on prison deaths.

But blowing our collective loads on the dark humor of Epstein’s death, while re-memeing the most meme’d political family in U.S. history, is effectively the extremely online version of jerking off while depressed. Isn’t the whole plot here a sort of depression meme unto itself? People don’t know how to process the implications of Epstein’s pedophile circle; I certainly feel resigned that by the time we discover the truth, it’ll be too late to do much other than quietly tut-tut at the TV (or laptop) screen before switching channels. We didn’t need Epstein to know that the rich and powerful in America are able to engineer and obscure heinous crimes, sexual or otherwise. We didn’t need him to realize the moral meritocracy of our nation’s leadership is a myth. We certainly didn’t need him to know that political dynasties seem ridden with murky people and activities, seemingly by nature.

Democrats and Republicans alike were waiting with bated breath for when and how Epstein would spill the truth, turning the prosecution into a game show. Stripped of that thrill, America used social media to gamify a conspiracy theory that everyone could get in on. Research suggests “smart” people are more likely to buy into refutable conspiracies, and the absence of all the facts on Epstein’s death led to a rush to fill that space with rhetorical mush. The same mechanisms that allows hate speech to flourish unchecked across social media also allowed us to Jeff-pill ourselves in rapid, fascinating fashion.

You could argue this has been catharsis for those simply frustrated that a piece of shit human never got his time on the stand. “We are frequently overwhelmed by too much stimulation, and too many choices instead of too few. As a result, we find ourselves looking for patterns, trying to simplify issues and giving precedence to opinions that reinforce what we already believe to be true,” Mary McNaughton-Cassill, a professor of clinical psychology, wrote about “fake news” in Vox.

But here are the facts: People kill themselves and each other in prison, often when they’re supposed to be supervised by guards. Our prison systems, whether federal, state or privately run, are a disaster. World leaders wreak death and havoc all across the world in the name of nation-states. Millions of minors around the world are subjected to sexual violence.

It’s a lot less funny than an Epstein meme, right?