The Subreddit Helping Pull People Out of Poverty, Justice for Tuna and How Donating Blood Gives the Gift of Boners

How much of my donated blood is in some guy’s boner?

The answer is out there, dear reader, and it’s looking for you, and it will find you if you want it to.

“How Reddit’s Low-Income Support Communities Are Helping Pull People Out of Poverty”
Reddit’s r/Povertyfinance isn’t just a message board for folks earning at-or-near the poverty line to rap about the pains of being poor. It’s a close-knit and uniquely supportive community, where people band together to lift each other out of poverty with a surprising amount of success. They share resources, offer ingenious advice and lend an empathetic digital ear to those struggling with the day-to-day grind of trying to make ends meet, a service that’s not only useful for its subscribers, but in some cases, vital to their survival. READ MORE

A Film Critic On… The Beach Bum

On what it is: “The Beach Bum is the new movie from Spring Breakers writer-director Harmony Korine, who casts Matthew McConaughey as Moondog, a writer, stoner and alcoholic who spends his day waltzing around the Florida Keys getting high and getting laid.”

On expectations, considering some of McConaughey’s recent acting breakthroughs: “[He has] seemingly put away childish things (or at least terrible rom-com roles) to focus on a series of serious performances that demonstrated his potential and his acting bona fides.”

On tempering those expectations: “The Beach Bum doesn’t definitively prove that the McConaissance is over, but it’s a reminder that we were probably fooling ourselves all along.”

On McConaughey’s return to a previous, less dramatic form: “[He] isn’t exploring something deep and dark about himself in The Beach Bum. Mostly, he’s coasting on persona.”

On zigging, instead of zagging: “If things had worked out a little differently in the actor’s life, he could have been this guy.”

On the film being good, relatively speaking: “As much as I dislike the film, it’s miles more fascinating than Failure to Launch.”

On silver linings: “Instead of lamenting the end of McConaughey’s golden age, maybe we should marvel at the fact that it happened at all.”

Read more of Tim Grierson’s review of The Beach Bum here — including McConaughey’s many weird commercials, ranked; Grierson’s hope for a yet-to-be-made Harmony Korine movie; and a brief scroll through Bum co-star Snoop Dogg’s IMDb page to admire the names of the characters he’s played on the big screen.

Newsflash, you fake-ice-cream-addicted Walter Cronkite: Halo Top, America’s favorite low-calorie ice cream, may not be bad for you, but it isn’t exactly good for you, either — no matter what The Bachelor says.

After all, Halo Top is basically just dairy and sugar, even if that sugar has been replaced by Erythritol — i.e., sugar alcohol, and Halo Top’s third ingredient:

Fake it all you want, but sugar alcohol is still sugar. And while it might “improve gut health,” it comes with a nasty side effect, too.

This Miles Klee piece on how we as humans have disrespected our tuna friends begins with a story about vanity license plates, and only gets stranger from there. But if you don’t finish it with a newfound reverence for the goodest fish in all the seas, I think you’re beyond our help.

No one with even half a brain would condone Cardi B’s behavior after it was revealed she used to drug and rob men with whom she’d had consensual sex. At the same time, however, calling it “rape,” or comparing her to Bill Cosby isn’t right, either. As Tracy Moore writes, what the story does reveal is the complex intersection of class, race, gender and deeply uncomfortable truths that lead some women to make choices that most people have never been confronted with. 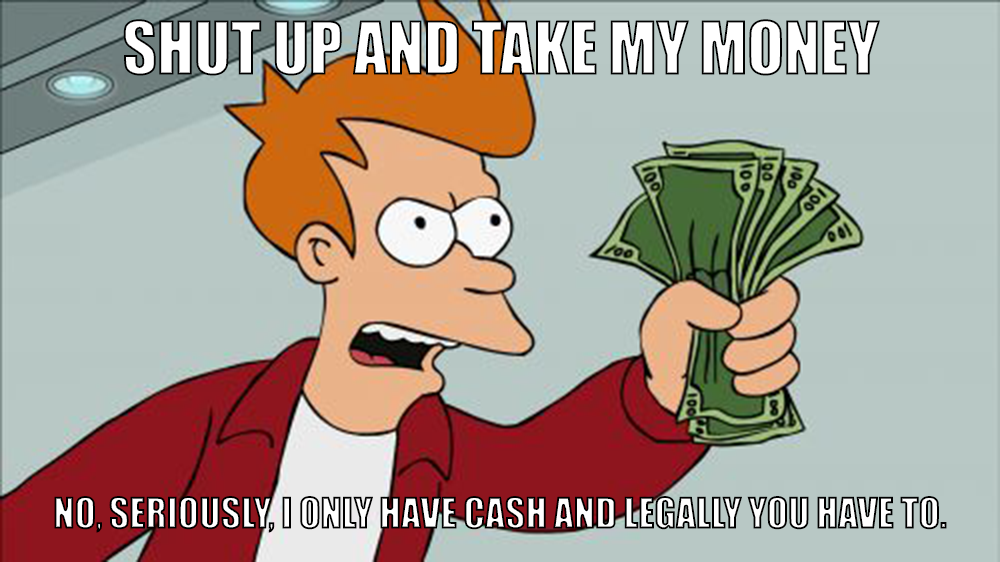 Reach for your wallet: Is there any cash in there? If you’re like me and millions of Americans, the answer is “nope.” This is our new normal, where people are far more likely to have apps and heavy-ass credit cards than paper money. And businesses are all about it, considering we tend to spend more money when we’re not dealing in green. The Federal government is behind going cashless, too. But considering that there are 8 million people in this country without a bank account, states are starting to wonder whether forgoing cash is discriminatory — and illegal, too.

Soon, however, he knows he will inevitably want to settle down, and while the challenge of finding a lifelong partner is frightening to anyone, Tim has no idea where to even start.

It’s officially blood-drive season, ya’ll. And if you’re on the fence about giving this year, please remember that every pint of blood you give goes to a boner — or, actually, boners — in need. Not only boners, but clitorises (cliterii?), too. Your blood would basically be helping the world get laid. That’s fucking dope, man. Go on, then. Donate your boner blood.