The Sisyphean Quest to Bring Back Discontinued Foods

When the long-lost Oreo Big Stuf reminds you of the rare affection of your withholding mother, you'll stop at nothing to bully corporations into putting them back on shelves again

In fall 2015, Jake, a 27-year-old in L.A., suffered a series of losses that made that year a real low point in his life. After burying and performing a eulogy for his best friend, he knew the only thing that would make him feel better was his favorite sandwich: Panera’s Chicken Chipotle Panini. According to Jake, “It was just an incredibly consistent sandwich: the perfect temperature, with a really special chipotle aioli.”

But when he entered Panera, his hopes were dashed. The sandwich had been kicked to the curb to make way for healthier fare, in particular, the Chipotle Chicken Avocado Melt, a whole 50 fewer calories than Jake’s beloved Chicken Chipotle Panini. A total bullshit move, in his opinion. “This never made much sense considering some of the options they held onto. It was also not their most unhealthy menu item,” he tells me. “I don’t know why they did this. It was their most popular sandwich. Toward the end of its life, it would often sell out by 7 p.m. There’s no discernible reason for the switch beyond intentionally antagonizing a large number of patrons. Honestly, it felt like some sort of sick game.”

Luckily, Jake’s misery had company: namely, the denizens of the Bring Back the Original Chipotle Chicken Panini at Panera website. “I have no idea who runs the site,” he says, “but I consider them a friend for having created it.” In the FAQ, they respond to the very reasonable query/reaction “This is a little crazy to make a website about a sandwich” with a very succinct bit of rationale: “Not just any sandwich, friend.” (They also share Jake’s great disdain for the Chicken Avocado Melt, considering it “disgusting” and a cheap imitator.)

Their ilk is actually all over the internet, where Facebook group upon Facebook group hold out hope for the return of humble foodstuffs such as Magic Middle cookies, Swiss Cheese crackers and Pizzaria chips. 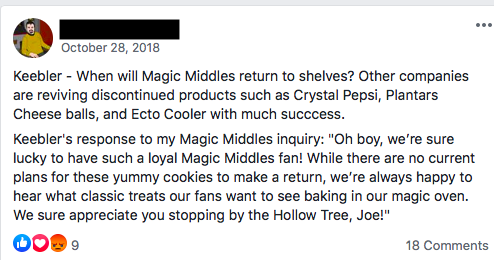 I’ll be honest: Initially, I thought these communities were ripe for mockery, but the humanity of it all quickly got to me. I mean, every emotion is on display: melancholy, fervent passion and righteous anger. There may be seven stages of grief, but in the world of discontinued food groups, acceptance isn’t among them. I also related to them, as I’m not above using whatever minuscule amount of social media clout I have to try to get a favorite food back in my grubby little hands:

Still, I hadn’t considered that there were formal groups for this sort of thing until my friend shared the glorious concerted effort on Facebook to bring back the Bell Beefer from Taco Bell:

Obviously, I was immediately on board:

After all, the group has it all, including Bell Beefer hacks: 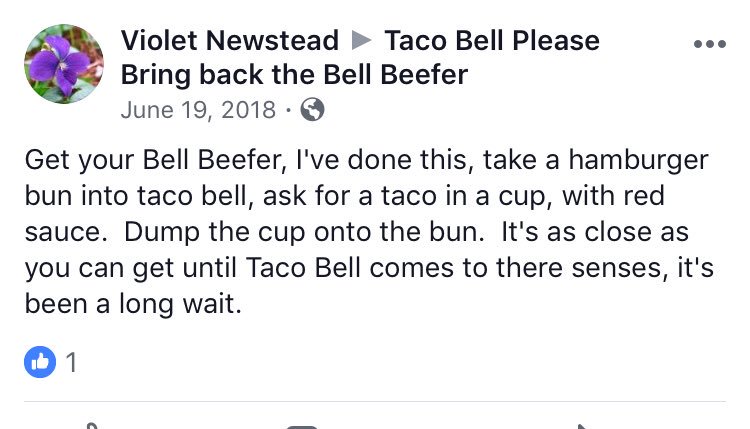 Better yet, the groups make you feel less alone and valid in your opinion that the shoddy replacement products corporate overlords push down our throats are absolute shit. I’m looking at you, McDonald’s Buttermilk Crispy Tenders! Speaking of which, I was thrilled to see others devoted to bringing back Chicken Selects, too.

There were even memes! 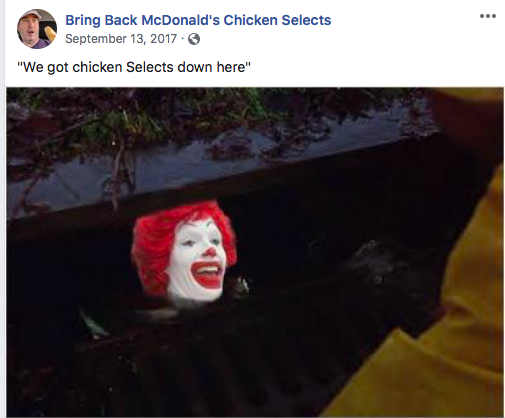 TV writer Bill Oakley, who along with Josh Weinstein was show-runner of The Simpsons as well as Futurama and Portlandia, says food has always been a big part of his life and work. To that end, he wrote the internet-famous “Steamed Hams” sketch on The Simpsons, and he now critiques food (fast and otherwise) on his Instagram account. And so, he completely gets the pain and frustration of having something you love disappear. “Having a favorite food item yanked is like having a favorite TV show canceled,” he tells me. “It’s gone, probably forever, and there is literally almost nothing you can do to bring it back. It’s sad!”

He thinks it’s the hopelessness of a David-and-Goliath-like battle that really leaves people feeling defeated. “Both TV and ‘Big Food’ are colossal industries that have little interest in catering to small niches,” he continues. “Starting a campaign, in both these cases, is a public attempt to show the company that — despite the bad ratings or low sales — there is indeed a significant fandom out there. It hardly ever works, but sometimes it’s worth a shot.”

Oakley has his own list of discontinued foods that he’d like to come back, starting with the Arch Deluxe and McDLT from McDonald’s, the Double Decker Taco from Taco Bell and the PB Max, his all-time favorite candy bar. His fantasy comeback item, however, was discontinued in 1971: “I’m dying to try Kellogg’s Presto Pizza, which was basically a Pop-Tart pizza you cook in the toaster.”

Meanwhile, for 37-year-old Chris, the love for a long-gone food product is because of how it symbolizes a tender memory. After years of nagging his mom to participate in his school’s annual bake sale, she finally agreed to go along with it. “I thought she was going to bake cookies or maybe a tray of brownies,” he tells me. “But nope. Not my mom. She went out and bought five boxes of Oreo Big Stuf, tossed them onto the table, and said, ‘Here. Happy?’ This made me cry, because all the other moms baked homemade stuff and laid it out on nice trays.”

In fairness, his mom felt bad about it, and the next morning Chris says, “I woke up and found every Big Stuf Oreo removed from its box and arranged artfully on a serving platter, which she’d wrapped in cellophane. She actually did care that this stupid bake sale thing meant something to me.” To him, it illustrated how much she really loved him. “Don’t get me wrong, my mom is a good mom,” he says. “But she’s not particularly warm in the way other kids’ moms were, so this was a little moment of kindness normally so far out of her wheelhouse, and it was the first one that really resonated with me. I cackle thinking about it now — her slumped over the kitchen table, unwrapping one ridiculously oversized Oreo at a time. The pettiness of it kills me.”

All of which is to say that Chris — as well as numerous Facebook groups — remain frustrated by Nabisco’s refusal to bring back this nostalgic fave. “Year after year, I hope that Oreo stops releasing garbage flavors and bring back those chunky Big Stuf,” he says. Making matters worse, Chris’s Big Stuf consumption was limited even back in the day. “After that bake sale, I asked for them all the time, but my mom’s usual response was, ‘What do I look like, the Queen of Nabisco?’ I probably only ate them once or twice before they were discontinued.”

He shouldn’t give up hope, though. Because his dream is not an impossible one. Case in point: A few years ago, Crystal Regehr Westergard found herself determined to bring back an old-school candy classic called the Cuban Lunch bar. Her journey started after her mother entered a nursing-care facility, and Crystal was looking for ways to connect with her and engage her memory. “I thought, ‘A woman never forgets her favorite chocolate, no matter what kind of dementia she has,’” Westergard tells me. “So I began a search for her lifelong love: the Cuban Lunch chocolate bar.”

Westergard found a Facebook page devoted to bringing it in back but not much action was being taken. She took it upon herself then to make its revival happen, which was aided by the fact that the patent for the candy had lapsed and was back in the hands of the trademark office. She applied to buy it for just $250, launching her company Canadian Candy Nostalgia in the process. “My mom taught me not to just talk the talk, but to also walk the walk,” she says. “I felt like pursuing that was another nice homage to the values she instilled in me.” (Needless to say, her mom was overjoyed to have her childhood favorite back.)

Since Westergard’s success with the Cuban Lunch bar, she’s been active in bringing back the Clark Bar, and is in the works to resuscitate one of her husband’s favorites: the Cadbury Rum & Butter bar. Along the way, she’s learned some Big Candy trade secrets that explain why a product can be beloved but also remain discontinued. “People in our culture believe in the democratic process, that if enough people ‘vote’ to bring something back, then logically, it should come back. But NOT SO! It’s in the large candy company’s best interest to keep selection narrow, so fewer machines have to be kept running, so then selection will just keep getting narrower,” she explains.

And some brands, like Trader Joe’s, get off on being withholding; they thrive on exclusivity. “Part of the Trader Joe’s experience — in addition to the tiki and the overly excited cashiers — is the constant fear that your favorite product could disappear overnight,” MEL‘s Joseph Longo wrote last year. “There are entire Instagram pages and Reddit threads keeping track of when products are scheduled to leave.”

But while corporations may be able to take the Oreo Big Stuf, the Bell Beefer and the Viennetta ice cream cake away from us, they can never take away our memories — or our ability to boycott them until they meet our demands. As Jake puts it, “I’ve accepted that my Panera visits are a thing of the past. I will never forgive them.”

Because in the online world of discontinued foods, forgive-and-forget is never an option.