When I got word that chef Adam Dodge, aka the Satanic Chef, needed a hand with the bar for the Devil’s Dinner Party at the Satanic Temple in Salem, Massachusetts — “an unforgettable night of delectable debauchery, fine dining, sacrifice and spirit cooking” — I agreed without thinking twice. Then I scrambled to figure out what, exactly, I’d gotten myself into.

“Guests will be part of a secret, surrealist, satanic soiree that will include a multicourse dinner, a burlesque performance by Szandora Lavey — the Devil’s Debutante — and a satanic ritual based off Chef Adam’s upcoming book,” read the ticket page. “This is an immersive event. Come hungry, leave (hopefully). All guests will be participants in the ritual and are asked to dress in their best formal surrealist attire.” 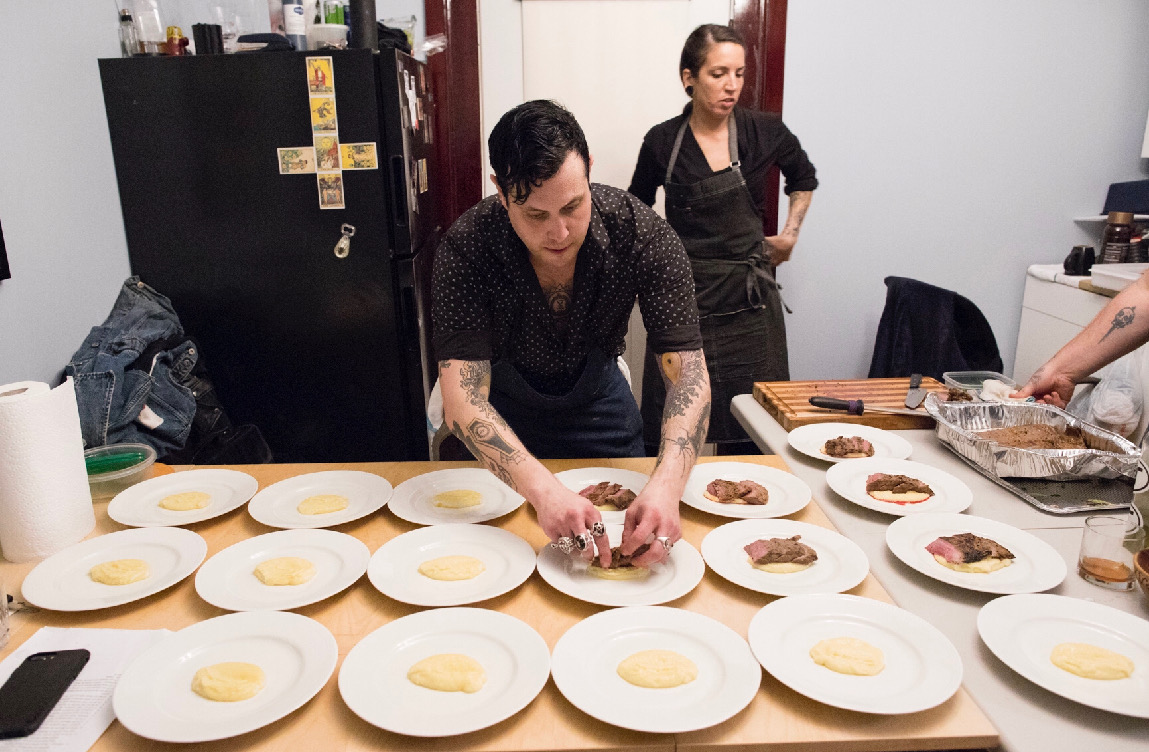 A few years ago, Dodge and I worked together at Tavern Road, the sadly now-closed venture of Michael and Louis DiBiccari. Now 38, he’s been cooking since he was in high school and practicing Satanism for nearly as long. He’s the official chef of the Satanic Temple, which was launched by Dodge’s longtime friend, Lucien Greaves.

The Temple resides in what was formerly a funeral home outside downtown Salem, and it looks exactly like you’d expect a 19th century New England funeral home to look: wooden porch, a tall, half-spiral staircase ascending to a kitchen. I arrived at 7:30 p.m. and set up the bar to the left of the second door, in front of a bramble-and-stone representation of Baphomet, the “Sabbatic goat” pagan idol. (As I fit speed pourers onto liquor bottles, I tried very hard not to break or be stabbed by Baphomet’s hooves.)

I admired the rest of the decor: a long, black-clothed table, red candles, the altar built in the back of the room in tribute to Anthony Bourdain (may he rest easy). 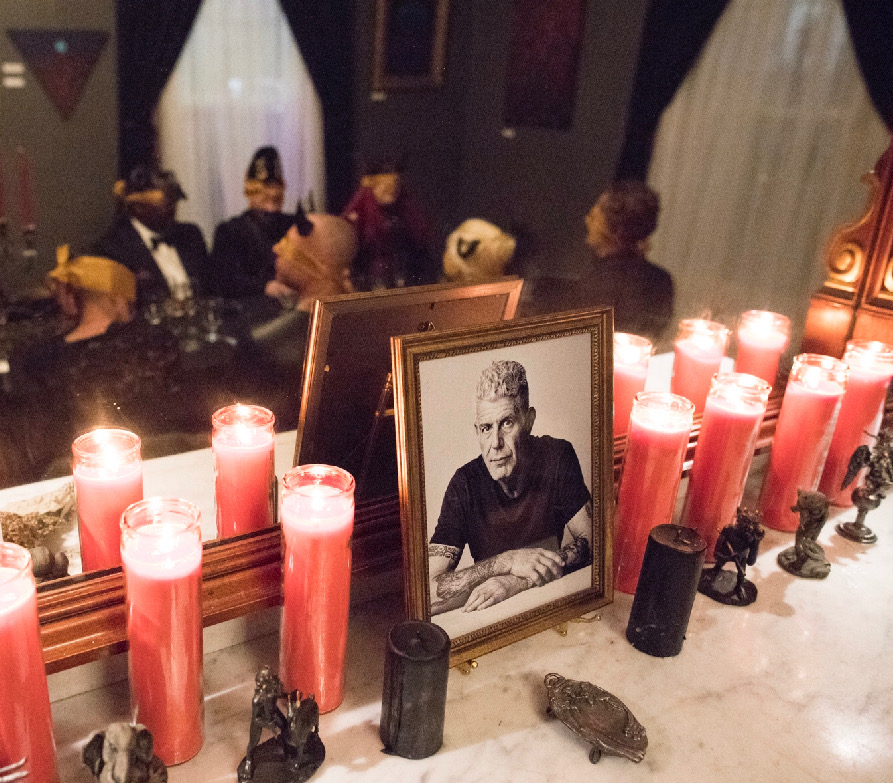 Now, what do you drink in a Satanic Temple? The easy answer is anything you want; one of the major points of the Satanic Statements is that there’s nothing sinful in indulging your desires — that sins, in fact, should be indulged, as they lead to physical, mental or emotional gratification and this gratification is a very good thing. And so, we had three sinful wines to be served with dinner: Prosecco to accompany the deviled-eggs amuse course; Ribolla Gialla grapes with the soup and salad; and a Barbera d’Asti with the meat entrée. To kick off the night, I served Blood on the Moors, a whiskey-based Manhattan variation, served with bitters and a lemon-twist garnish.

As for who I was dealing with, some of the Satanist stereotypes are true: black clothing, black hair, a penchant for the gothic and body art. Nick, an usher, had beautiful tattoos criss-crossing his shaved skull; Devin, who ran the food, had a tie pinned to his shirt by a bondage-esque set of suspenders. The gallery manager I’d simply describe as tall and in a dapper, plaid suit. The guests were no less festive. There were masks and horns, tuxedos and gowns, corsets galore and a man who could have walked straight off the set of A Clockwork Orange. One Temple member wore a buffalo head (no, not a real one), and Nick never entered the dining room without a tiger mask. 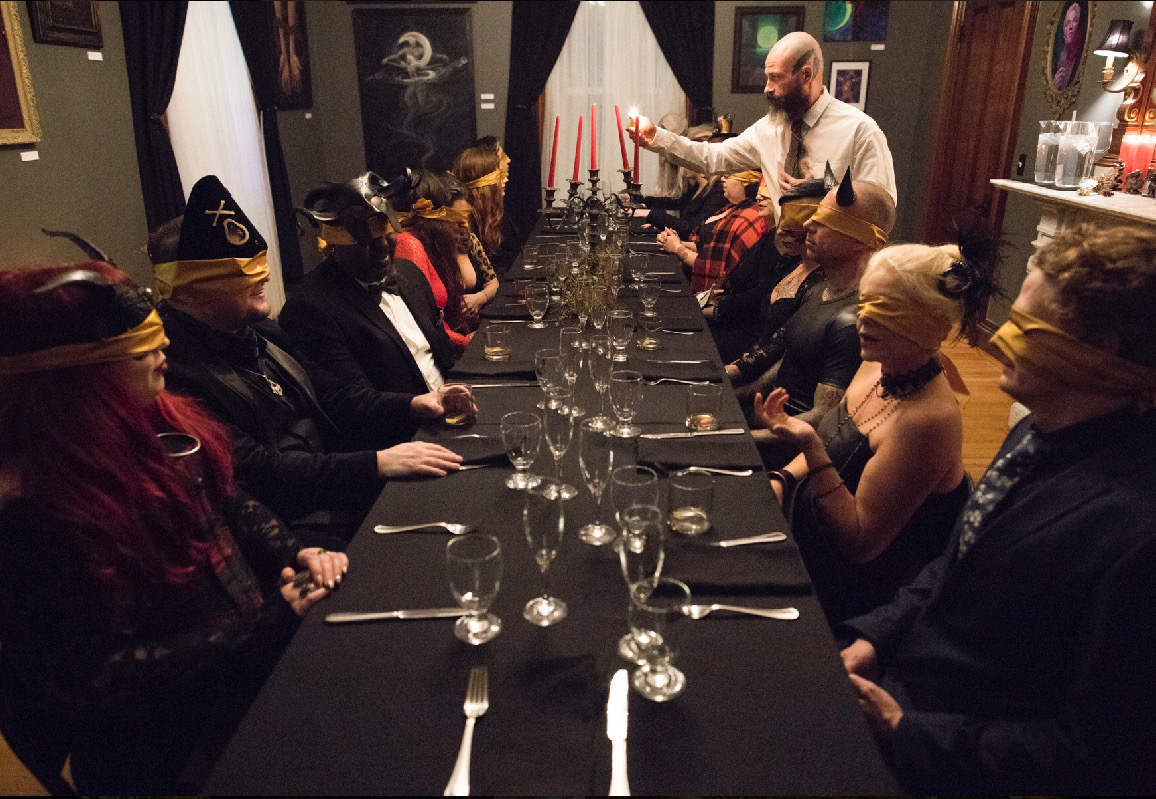 At some point, Shiva, the hostess, started blindfolding people. The purpose of the blindfold, I was told, was to engage and elevate your remaining senses and to foster a sense of intimacy. Think about it: When you can’t rely on sight, you not only pick up on more sounds and smells than usual, you also listen better.

Because I’d never poured wine for a group of blindfolded people before, it took a minute to figure things out. The main lesson was that when someone is sitting down blindfolded, and you’re standing behind them to reach out and fill their wine glass, anticipating their needs (the mark of a great bartender beyond making drinks) means trying not to scare them. (That, of course, is an ironic aim when at the Satanic Temple.) Essentially, you need, to lower the volume of your voice and tell them exactly where you are and what you’re doing.

“Hi, friend,” I said in a low voice (not a whisper — this wasn’t Eyes Wide Shut). “I’m going to be right next to you for a moment. I’m going to fill your wine glass. That all right? … I’m going to move this right toward your hand, okay?”

It may have been the most maternal I’ve ever been.

And it was magical.

Everyone took off their blindfolds after the first course, but when they did, they weren’t strangers anymore.

A phrase I come back to again and again in hospitality is that we turn strangers into friends. That’s what the Satanic ritual of the blindfold did. To that end, I talked with Dodge about what, really, Satanism is all about. “Satanism is simply a symbol of freedom and the right to rebel against anyone who forces their beliefs on you,” he explains. “It’s about being passionate in what it means to be a good human and rebelling against the forces that try to quash that humanity.”

Which, for me, sounds a lot like working in a restaurant. The whole ethos of hospitality is to welcome someone into your home, no judgment. Until you give me a reason to say I don’t want you here, you’re welcome. (Also, what could be more antithetical to the 9-to-5 suit-and-tie lifestyle?)

Dodge agrees. “Restaurants have always been a place for talented people, no matter what you look like, who you fuck or where you’re from,” he says. “And Satanism is just that, too — out in the world. For me, hospitality isn’t just a job, it’s a way of life. And that’s what Satanism is: a way of life.”

Haley Hamilton is a Boston-based bartender. She writes The Shakes, MEL's weekly column dedicated to drinks, booze, bar culture and sometimes other vices. She enjoys cocktails, mezcal, yoga and fucking with the patriarchy.