The word “troll” comes with a lot of baggage. Canonically, the Old Norse trolls were of a type with “fiends” or “demons,” otherworldly beings that lurked in the landscape, unhelpful or even hostile to humans who encountered them. “Trolling” as an online activity has collected still more negative associations — an internet troll is thought to be vexing, abusive and outright hateful, posting their bile from a lightless basement, always trying to drag others down into the murk.

But the ever-mounting concern with these trolls (and the extremism to which they’re prone) may blind us to a friendlier, funnier troll in our midst. This is the troll not as odious malcontent but a nimble, mischievous spirit who enlivens our surroundings with their magic. You’ve probably enjoyed the work of such a troll without realizing it, for they are secretive and sly. Did you happen to read the Reddit post about the woman who, for her Harry Potter-themed wedding, sorted the guests according to Hogwarts house, and was shocked when people complained?

Yes, this viral tale is much too good to be true. It’s the work of a 30-year-old woman who had no such wedding ceremony, and she goes by the alias CartoonsHateHer. A cartoonist and lifelong troll who has elevated the craft of shitposts that get people asking “what the fuck did I just read?,” CHH is now the author of a how-to manual on the topic, The Troll Handbook: 100s of Accounts, 100s of Bans, 100s of Posts, One Bored Girl. In the book’s opening chapter, she explains why she feels the need to dupe folks on the internet into believing her ridiculous anecdotes and personalities are real. “It makes me laugh and it makes my friends and family laugh,” she writes. “Trolling is an escape from whatever is bothering me that day, even if the only thing bothering me is simply boredom.” It’s not for clout, it’s not political and it’s not mean. It’s for the hell of it.

“If you want an example of the first time I ever trolled,” CHH tells me in a Twitter DM, “when I was three, I shouted the word ‘horse’ repeatedly during nap time at preschool, and when they put me in time out, I just shouted ‘horse’ from the time-out chair, and when my parents asked me why I did it, I said, ‘What else could they do to me after time out?’”

Later in life, she took an interest in her dad’s online antics. “My dad used to troll Saved by the Bell message boards in the 1990s, pretending to be some kind of corporate shill ‘Screech’ character reminding the kids to stay in school and not do drugs.” Over the years, she began to follow her old man’s lead, attempting “some pretty wack trolling on Degrassi message boards,” then bouncing around different sites and developing a range of voices. “I never wanted to do anything to antagonize — worst-case scenario I wanted to rile up people who took things too seriously.” Eventually, she realized which platform was best suited to her talent for pushing the limits of credible narrative: Reddit.

“Reddit was the perfect outlet just due to the huge amount of users and how easily those posts can spiral out of control,” explains CHH. The different subreddits there can be niche and popular at the same time, allowing for both specificity and exposure; some host content with crossover appeal on other social feeds, including Twitter. Before now, a post on r/relationships had maybe the best chance of going viral elsewhere, but lately, it’s r/AmItheAsshole, where users submit personal stories of strife and disagreement for a ruling on who involved is the bigger asshole. That’s where CHH’s Harry Potter wedding bit blew up, and it’s where she’d previously concocted the amazing character of a sex-positive dad who ruined Halloween by dressing up as a clitoris.

“But AITA is getting extremely heavily moderated,” she says. “I actually don’t troll there very much anymore. Everyone is looking out for fake posts.” She lists a few common tells for fabricated situations: “One is ‘My husband is obsessed with [insert niche thing here].’ These posts got really popular lately, so they’re pretty much always fake.” Ditto “surrogate/infertility drama,” where there’s “never a legitimate infertility diagnosis, it’s always just ‘They can’t have kids’ and the infertile couple is always asking some completely insane and medically naïve request.” Another giveaway, CHH says, is the “crazy religious Karen” persona. “if someone is posting about their wacky fundamentalist mom, it’s likely fake.” Anything “Karen-y” is suspect.

So how does something like the Harry Potter wedding gambit succeed while other shitposts are outed as bogus? It’s about the exact points of plausibility and discord. The Hogwarts house bride plays well “because, first of all, people like that actually do exist, and second of all, Harry Potter isn’t something Reddit hates, if anything it’s just highly polarizing,” CHH explains — therefore, commenters will engage with it. “Wedding drama is probably my favorite topic because it’s always slightly believable,” she adds. “Like I did one where the bride’s father wanted everyone to pre-pay for ‘wedding tokens’ that they would later use for drinks and food and it went viral across every wedding-shaming group.”

When I ask her how she came up with the detail, in the Harry Potter post, of Lenin being a Slytherin — which caused me to do a double-take when I first read it — she likens it to an artist’s signature: “I try to slip something weird like that into most of my posts,” she says. In this case, she knew she wanted to include “fake canon” within the fandom: “I wanted her to say something like, ‘Slytherins aren’t bad, XYZ universally loved person was a Slytherin. But then I thought it would be funnier if the universally loved person was some random, somewhat polarizing person. There’s also a lot of popular glorification of communist leaders, but in very specific subsets of people, and niche topics always tend to be really funny. So the idea of being like, ‘Everyone loves Lenin,’ and then on top of that, ‘It’s common knowledge that he was a Slytherin’ — I just knew it would be good.” 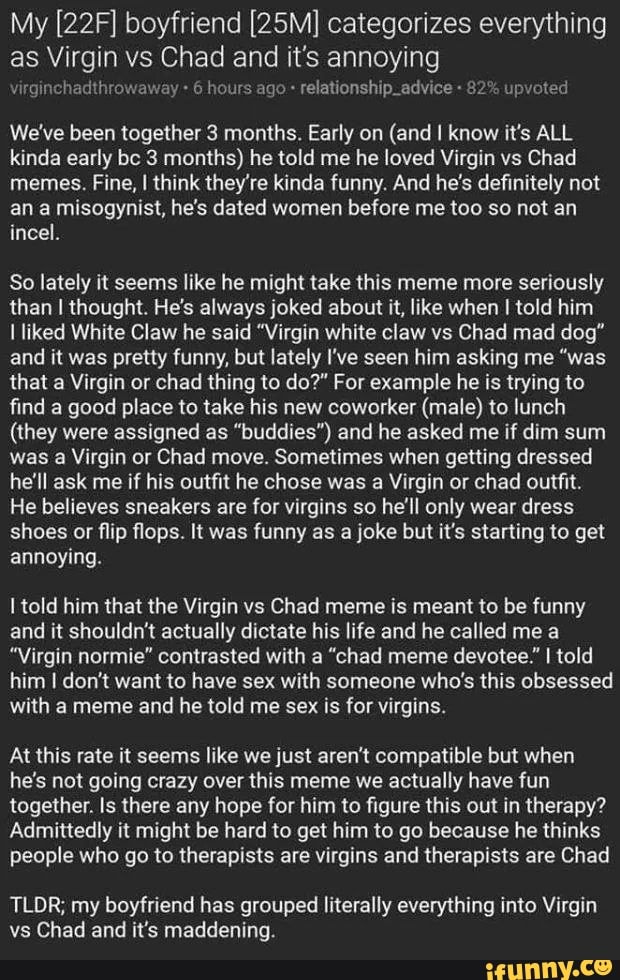 But you won’t always get away with posting stuff like “Am I the asshole for calling my girlfriend ‘big chungus’?” — at least not if you turn it into a habit. For CHH, the downfall came when she sought what any authors would crave: recognition. “I had been doing this for like 10 to 15 years,” she says. “I was tired of my only audience being my family and friends, who often got sick of the posts and didn’t read them.”

Meanwhile, her posts killed on Twitter, with thousands debating their veracity. “The narcissistic side of me was like, ‘Wouldn’t it be great if I told them it was me and then everyone loved me?’” she says. “I think the biggest moment for me was when my “My boyfriend refers to everything as Virgin or Chad” post wound up on Pardon My Take, the Barstool Sports podcast, and they didn’t know it was me, so probably hundreds of thousands of people were laughing at my post and I couldn’t get any credit. I think we all want credit.”

So she started taking it, publicly announcing which posts were her work after they’d made the rounds. It gained her a loyal following (and customers for the book), but it also backfired. “I partially regret it because now people just tag me whenever a possible shitpost comes up, and I kind of preferred people not knowing,” she says. “I can’t have it both ways, I guess.”

Worse, some have lashed out at her for this trolling hobby. “There’s this one woman who scolds me every time my name comes up because I ‘lie to people.’ Seems like a weird thing to get upset over, but it’s the internet,” she says. The biggest problem, though, is that Reddit banned her — a few of her accounts in 2019, then her actual IP or device (she’s not sure which) in 2020. She has a strategy to get around the block, which she declined to share for obvious reasons, but it’s a method that keeps her from practicing the skill of “Long Game Trolling,” where she creates deep posting histories for years under a given screenname to gain trust and legitimacy. “People will see something like that and think, ‘This is either the most dedicated troll ever, the craziest person ever, or both,’” she says. As of this moment, though, she has to stick with meticulous one-offs.

“I will probably eventually just move onto another site,” CHH says. “I do find it troubling that I’m some kind of FBI’s Most Wanted on Reddit. There are really toxic people on there who say we should lower the age of consent or post racial slurs, and everyone is like, ‘No, let’s get rid of the anime wedding girl.’”

It is odd, I reflect, that we tend to privilege online harassers who seem to be expressing their “sincere” views, however abhorrent and destructive, and instead rebuke the gentle trolls who want to prank us with harmless, highly amusing fiction. It’s not that some won’t overreact to CHH’s masterworks — one redditor threatened to call Child Protective Services on “Clit Costume Dad,” and another person wanted to call the feds when she “pretended to be a teenager who was afraid of going to jail for watching Mario and Luigi porn” — but almost everyone else can enjoy their surrealist charm, whether or not they accept them as factual. There is a part of us that wants to believe, as The X-Files’ Agent Mulder would say; sometimes we see a shitpost for what it is and don’t care, since it’s just that good. It suspends our doubt.

These days, CHH is back to luxuriating in her pseudonymity and — this article excepted — not claiming authorship of new material, so that readers can puzzle over it and argue what’s genuine and what is impressively, beautifully counterfeit. “Watching people deliberate is my favorite thing,” she says. “That’s how I get my sick kicks.”

Otherwise, she’d just write literature, of course. But a novel doesn’t create the same kind of living tension, with virtual communities passing it around in hopes of understanding its provenance. The way I see it, trickster trolls like CHH perform a valuable, often invisible service, rhetorically asking us how gullible we wish to be and why we are so eager to take the absurd at face value. And as you can’t say with certainty that you’ve never fallen for one of these posts, you have to accept that your experience of the web will always be partly illusory — the result of a stranger’s private joke.

It doesn’t have to be deceit, either. Some of CHH’s finest bits are not intended to mislead but simply entertain, confuse and surprise. For the terminally online, it’s easy to feel numb and “over it,” as though we’ve seen the full extent of human behavior. But the best trolls make everything new again.