I’m a bit of a self-declared Instagram thot. Posting hot pics and getting attention is fun and validating. Usually, I ask my boyfriend to take a few when we’re out at a place like the beach — i.e., primo thot real estate — or I’ll take my own photos at home. Sadly, none of my photos ever come out as good as they would if I opted to get real with it and pose for a legit boudoir shoot. Though it’s pretty acceptable these days to DIY your own hottie shots, there’s still a market for people who want it done professionally. And while the classic boudoir has changed in the age of Instagram, it’s remained popular because of millennials, not despite them. Finally, something they haven’t killed.

“Poly Parents Are Losing Custody of Their Kids in Brutal Divorce Battles”
Although the “persecuted polyamorist” is something of a cliché at this point, it isn’t unheard of for poly people in general to face institutional discrimination. Case in point: Custody battles. After a brutal divorce, some slighted partners try to point to the other parent’s polyamory as an example of them being unfit to care for the child. Poly people also often have a difficult time being approved for adoption or fostering. Some even spend tens of thousands of dollars in legal fees to support their right to be both polyamorous and a parent. READ MORE

In a cruel twist of irony, it’s almost more expensive to be dead than alive. That is, unless you’re happy being buried in the least dignified way possible, you (or your bereaved loved ones) are going to have shell out the big bucks, like $2,000 big ones for a hearse. And that’s just transportation! Factor in a casket, funeral plot, headstone and a grave liner, and you can quadruple that number before you even get to the memorial service. Ian Lecklitner breaks down the outrageous range of costs that go into burying a body the legal way.

Do you find the humiliation of having peed your pants hot, but can’t stand to actually sit around in wet pants? Well, there’s a solution for you. Wet Pants Denim was created for the fetishists who love the look of incontinence but need the practical dryness of non-peed-in pants. More simply put, the company makes jeans that only make the wearer look like they pissed themselves. We had a writer try them out in public. One major takeaway: It is very difficult to make eye contact with people when it looks like there’s urine pooling around your crotch.

You’re at a quick-lube chain getting your oil changed. The tech (who’s paid to upsell you) pulls out your air filter and asks you if you’d like to have it replaced. Should you:

A) Rely on their “expertise” and take them at their word?

B) Use the “see through” method to test whether the filter is still good or not?

C) Wait until your check-engine light comes on to replace?

The correct answer, according to our resident car guy Jeff Gross, is, obviously, “B.” Besides explaining what the “see through” method is, he also gets into how to tell whether your brake and transmission fluid has kicked the bucket, too. Because when it comes to getting your car looked at, trust — but verify.

When it comes to big dicks, often the talk seems to focus on length. But as many on the receiving end will tell you, it’s girth that matters. The thing is, we don’t exactly have a clear point of reference. Sure, we know what five inches looks like in length, but what does it look like if someone is five inches ’round? Tracy Moore says it’s time we talk about girth — but first, we need to figure out how.

Facing failure can be existentially devastating. For that reason, many people decide not to face it at all, and instead, quit whatever they’re good at while they’re still really good at it. Surprisingly, this can often be the right move. But the key to walking away is knowing when.

“Generation Lockdown” has grown up amid literally hundreds of major school shootings, and that grim reality has had devastating effects on students’ mental health. To deal, memes have become a popular way to make light of that constant threat, while also demonstrating the fear and paranoia that American students face in the classroom. Some of these memes perpetuate assumptions about shootings, or even glorify the shootings themselves. Regardless, they represent the terrifying trauma of being a kid in 2019. 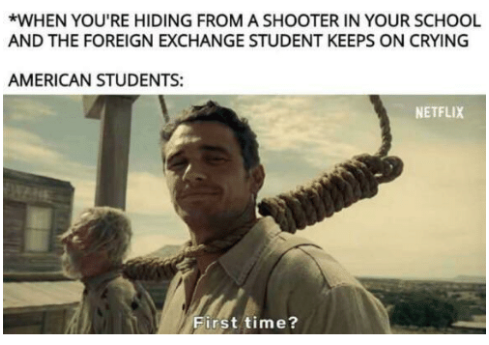