The Photo That Proves We Want to Smash the Surveillance State

Last year, as the coronavirus pandemic enveloped the world, journalists were alarmed by how closely some nations had begun to track the movement of their citizens through smartphones and other personal devices. Here in the U.S., we feared that the surveillance state, already quite intrusive, would seize the opportunity to expand and further entrench itself on the pretext of stemming a fatal disease.

Fast-forward to 2021, and several states have enabled notifications of possible exposure for iPhone and Android users, with tech giants Apple and Google assuring customers that their privacy is protected in the Bluetooth-based system. Whatever that’s worth.

But as we worried about the security of our health data, another nightmare was unfolding: In February, the Electronic Frontier Foundation reported that the Los Angeles Police Department “sent requests to Amazon Ring users specifically targeting footage of Black-led protests against police violence that occurred in cities across the country last summer” following the death of George Floyd, for which a Minneapolis cop is now being tried on a third-degree murder charge. The EFF called the emails they obtained “the first documented evidence that a police department specifically requested footage from networked home surveillance devices related to last summer’s political activity.”

Of course, Big Tech doesn’t always have to collaborate with law enforcement to put us in jeopardy. This week, Bloomberg reported that the security camera startup Verkada was breached, with hackers gaining access to 150,000 cameras that the company’s employees use to watch their customers. The intruders were “able to see inside Tesla Inc., as well as watch police interviews and witness hospital employees tackling a patient.”

All of which brings me to this image. 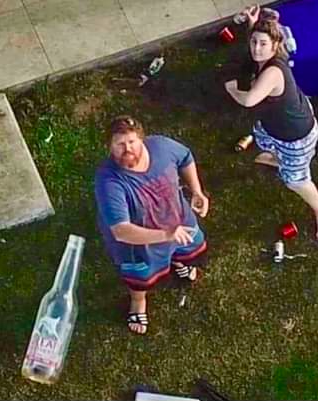 The photo above has made the rounds online for a few years. Based on the Great Northern beer label visible in the lower left corner, it was almost certainly taken in Australia — a 2018 post has the caption “Don’t fly a drone over a bogan yard.” (“Bogan” is an Australia/New Zealand term comparable to the U.S. “redneck,” suggestive of lower social class and uncouth attitude.) Since then, others have claimed this is a Florida couple attacking an Amazon drone, but also a pair in Kentucky, Kansas and Ohio. Although that last post came from a satirical Facebook page that begged residents to stop hurling projectiles at nonexistent “anti-drug activity drones,” it was picked up by other web communities that first mistook it for a real announcement from small-town police. Courtesy of Tumblr, it even got a nice “REVOLT AGAINST THE MODERN WORLD” filter. 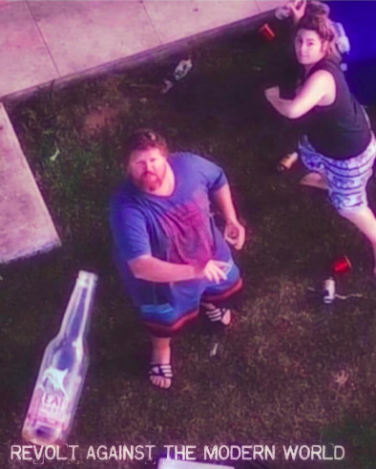 Why might this content recur across so many platforms for so long, and with such varied purported origins?

I suspect that as it becomes more and more difficult to ignore the ways we’re being spied upon, we are training ourselves — perhaps even subconsciously — in low-tech forms of direct resistance. (The Facebook meme group shared it again this week after initially posting it in 2019, this time drawing the ire of libertarians who vowed to take down any snooping gadget in similar fashion.) We’re amused by ordinary drone crashes and “fails,” yet we thrill to videos where someone nails one with a beer can, or knocks one out of commission with a well-aimed roll of toilet paper. We love to see people physically abusing mobile robots, smearing them with garbage and pushing them into fountains. We end up regarding the vandals who trash traffic cameras and spray-paint over Ring doorbells as the “righteous” kind of outlaws. And, in the back of our heads, we are imagining our chance to fight back against Big Brother.

So, even though the pic of a man and woman assaulting a drone with bottles is “fake” in most of the contexts where it appears — and the source remains murky — its continued popularity seems to be emblematic of our readiness to do battle with authoritarian machinery, using relatively simple weapons. As the state continues to find ways to automate and outsource the work of information-gathering to remotely controlled tools, we gain the freedom to exercise a violence we probably wouldn’t choose if confronted by an actual human being. If we’re going to be stalked, harassed and controlled by anonymous devices, however, then it’s no holds barred. And until someone builds the real-life RoboCop, it’s clear that we have a fighting chance.