This Netflix action film, starring Charlize Theron, is least interesting when it’s playing along with genre conventions. But when it focuses on its flawed, vibrantly alive characters, it’s electric.

It’s been almost exactly a year since we’ve had a Marvel movie, and it’s been about five months since we’ve had a DC Comics film. By this point, we were supposed to have seen Black Widow and Wonder Woman 1984. The march of superhero movies wasn’t expected to end anytime soon, but finally those costumed heroes met their match in the form of the COVID-19 pandemic. As a result, we’re now living in the longest period we’ve gone in quite a while without a comic-book film. It feels strange, but also kind of novel.

As The New York Times’ A.O. Scott put it recently, this unplanned pause has provided a moment to consider just how inundated we’ve been with mighty men and women. “[M]aybe … we can reflect on why we thought we needed all those heroes in the first place, or how they were foisted on us,” he wrote this week. “Eventually, we’ll go back to the movies, but maybe we’ll be less docile, less obedient, when we do.”

Little did he know that a different kind of superhero movie is about to fall into our laps. The Old Guard probably won’t make up for the absence of Natasha Romanova and Diana Prince, but this uneven, ultimately winning rethink of comic-book films at least suggests why we cared about them in the first place — and also what they should do differently when they eventually come back. As a piece of action cinema, this Netflix release is solid, if a bit familiar. (We’ve seen this sort of top-flight hand-to-hand combat and effects-driven spectacle many times before.) But when The Old Guard pushes against the conventions — when it tries to be emotional, character-driven, soulful, even philosophical — that’s when it becomes truly powerful.

Based on a series of graphic novels, the movie (which starts streaming July 10th) stars Charlize Theron in a role that may initially feel familiar. She’s Andy, the leader of an elite squad of globetrotting, do-gooding mercenaries that also includes Booker (Matthias Schoenaerts), Joe (Marwan Kenzari) and Nicky (Luca Marinelli). Hired by Copley (Chiwetel Ejiofor), a former CIA agent who enlists them for delicate black-ops missions, they journey to South Sudan to rescue some kidnapped young girls. But when they arrive at the stronghold where the girls are being held captive, Andy and her team realize the awful truth: It’s an ambush. Instantly, the mercenaries’ bodies are riddled with bullets as they fall to the ground, blood flying everywhere. We’re 12 minutes into The Old Guard, and all our heroes are dead.

Slowly, Andy and her crew get up, their wounds healing as if nothing had happened. Watching remotely, Copley confirms what he’s always suspected: They’re immortal. Making a run for it, their secret exposed, the mercenaries must go into hiding. Copley is working with Merrick (Harry Melling), a sniveling Big Pharma exec who sees the commercial potential for selling a drug that promises immortality, and so they plot to capture Andy’s crew in order to study their DNA.

In the meantime, the team realizes that there is a new immortal, a U.S. Marine named Nile (KiKi Layne) who just had her throat slit while stationed in Afghanistan. Nile wakes up the next morning to discover she doesn’t even have a scar, which freaks her out. Andy tracks Nile down and brings her into the group, explaining that she and her cohorts have been alive for centuries. (Andy is the eldest of the immortals, although she’s cagey about how old she actually is.) Nile can’t believe it, but there’s no time to argue: Merrick and Copley’s soldiers are after them.

Of all the superpowers, invulnerability always seemed among the least interesting. Sure, being able to heal instantaneously has obvious perks, and nobody wants to die. But as a viewer, it’s also a bit anticlimactic. What’s riveting about Batman is that he’s mortal — not just flawed but able to be killed — while dull ol’ Superman is impervious to just about everything, which means you basically need to find some random kryptonite to have a chance against the guy. What made Wolverine cool wasn’t his immunity — it was that, as he got older, that power slowly started to fade, forcing him to face the same fears the rest of us walk around with. We prefer our superheroes to be powerful but not almighty: Who wants to root for someone who can’t be hurt?

The Old Guard doesn’t entirely get around this problem, but it’s a credit to director Gina Prince-Bythewood and screenwriter Greg Rucka (who also wrote the graphic novels) that they find some new wrinkles in an old narrative dilemma. This might be the first superhero movie to evoke the existential melancholy of the super-cool indie vampire film Only Lovers Left Alive when it’s not delivering the sort of shoot-‘em-up thrills you’d expect from a movie like this.

Prince-Bythewood has made a career out of tweaking familiar genres, positioning complicated romantic dramas within the realms of the sports film (Love & Basketball) and a portrait of the modern music business (Beyond the Lights). So it’s no surprise that The Old Guard doesn’t always play by the rules, although to be honest I wish it was even nervier than it is. You almost sense the filmmakers fighting to serve two masters: their own idiosyncratic vision and a marketplace that demands a more traditional “badass” action movie. It makes for a film sometimes at war with itself, which ends up creating an interesting tension that helps animate the whole affair.

Whether in Aeon Flux, Mad Max: Fury Road or Atomic Blonde, Theron has carved out a niche as a steely action star. Her characters don’t say much but are lethally efficient and effortlessly commanding. Andy is no different, but once her secret is revealed, we recognize a bone-deep exhaustion within this ancient warrior. She’s equally adept with machine guns and battle axes, but she’s long gotten over the idea that being immortal is something to envy. As we’ll learn, never dying simply means saying goodbye to people over and over again. Andy and her crew work together, in part, because their fellow mercenaries are the only ones who can commiserate with their plight. (And sometimes those psychic wounds run deep: Andy is still scarred from the memory of a fallen comrade who, generations ago, was locked in a metal coffin and dumped into the bottom of the ocean, trapped for all eternity alive in her watery grave.)

In some ways, The Old Guard’s supernatural laments are hardly new. (Anybody who’s seen a single Dracula movie knows the downside of being undead. And the X-Men films got a lot of mileage out of treating superheroes as bonded outcasts.) But Theron and Prince-Bythewood thoughtfully dance around those familiar tenets, instead focusing on the perpetual loneliness that we all feel in the world — and how rare it is to find our tribe of like-minded individuals. 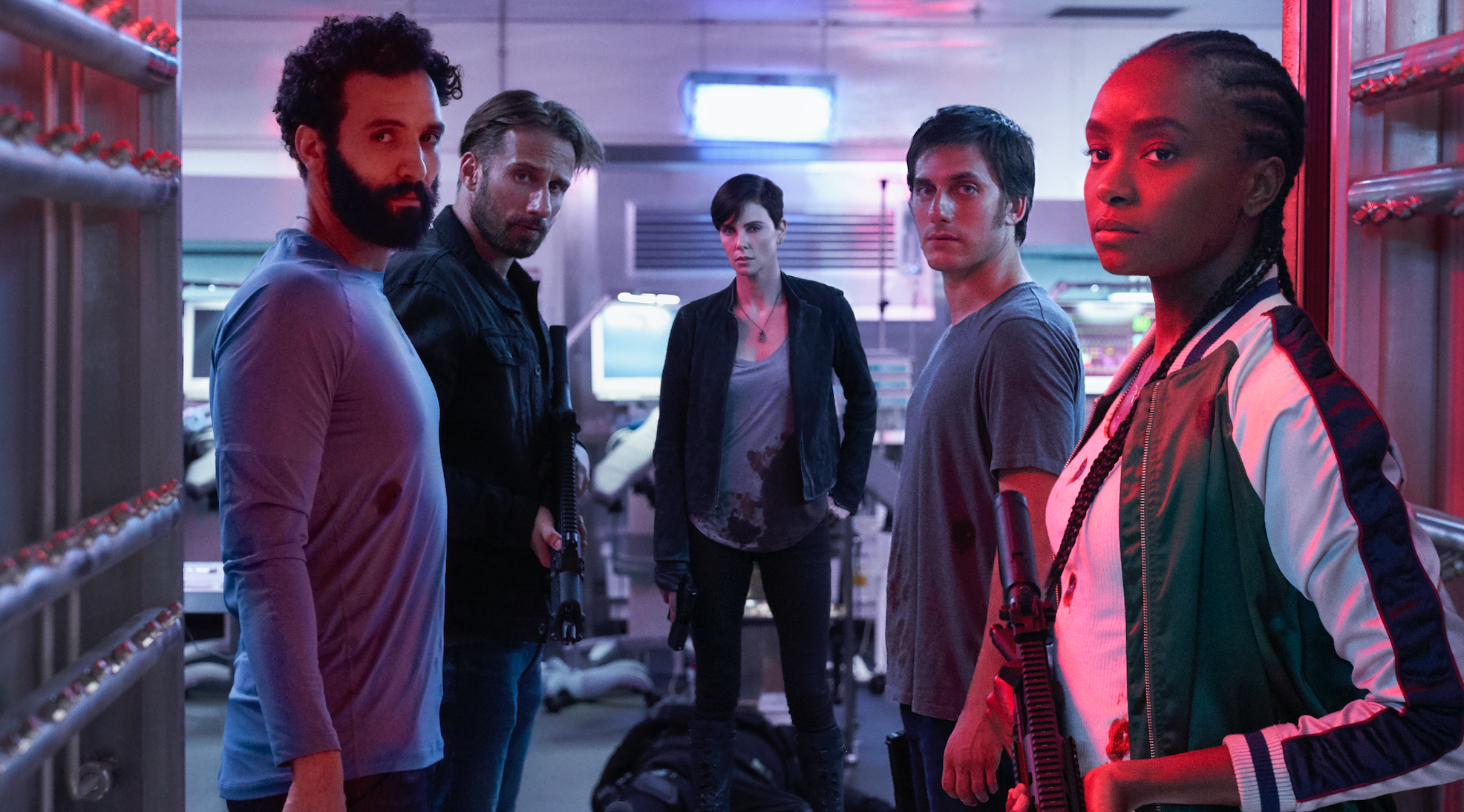 For these soldiers, that solace comes in one another, and Nile initially struggles to accept her fate as their new recruit. Making the world a better place is a noble goal, but it has its drawbacks. For one thing, these immortals can’t die, but that doesn’t mean they can fly or run fast or have super-strength. (Also, as Nile will come to find out, bullets still really hurt, even if they’re no longer fatal.) But those limitations humanize these heroes — as does the knowledge that, every once in a while, an immortal can lose his or her power without warning. Will their next firefight be their last?

In Only Lovers Left Alive, the ageless bloodsuckers played by Tilda Swinton and Tom Hiddleston were the ultimate comfy old married couple who realize that, as millennia come and go, all you can really rely on is your soulmate. The Old Guard makes a similar point, movingly, through the relationship between Joe and Nicky, who have been lovers for a very long time. While Marvel and DC have been slow to embrace gay superheroes, The Old Guard makes these characters’ romance a central plot point — while not congratulating itself for how “progressive” that fact is. There’s an incredibly touching scene in the film between the two men that’s unlike anything you’ve seen in a comic-book movie, and it comes directly from the graphic novels. I won’t spoil anything about the scene, but I will say that, although Joe and Nicky are immortal, they’re still not impervious to homophobia.

Those very relatable woes are at the center of what makes The Old Guard so intriguing. Andy seems an island to herself — the only woman in the group until Nile arrives. (That probably explains why she’s so drawn to this Marine — she’s been without a female friend for eons.) Likewise, Nile doesn’t necessarily consider her inexplicable newfound power to be a blessing. As the film eventually explains, her upbringing has been fraught, and becoming immortal won’t necessarily make that hardship better. Even Copley, one of the film’s principal villains, has an emotional reason for capturing the mercenaries, and The Old Guard gives him the space to explain himself. Again and again, Prince-Bythewood forces us to consider the messy humans at the center of this story, some of whom have powers but are all dealing with pain across the board. 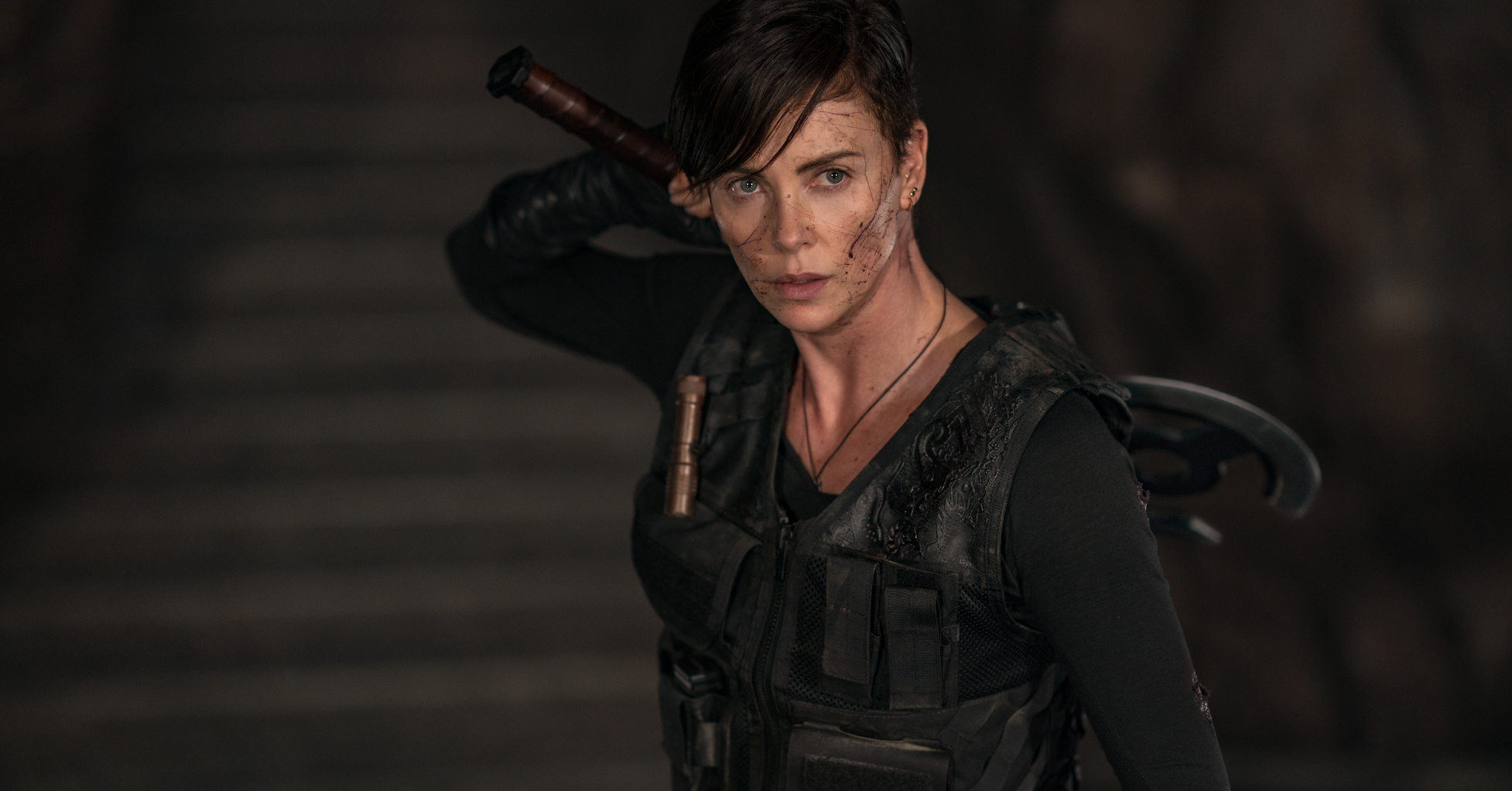 This is crucial because The Old Guard’s shootouts and showdowns — the typical superhero-movie stuff — aren’t especially inspired. Theron remains an arresting figure when she’s dispatching armies of bad guys — just her unblinking glare is imposing — but that element of the film you’ve seen before. (That said, The Old Guard is more down-and-dirty in its action scenes than the typical Marvel movie, where the derring-do is usually a little more clean-cut and comic-book-y.) Some of the plotting is mediocre, and a few of the supporting characters are cardboard boring. And the film is occasionally undermined by the same generic-Netflix-movie problems that undermine a lot of their original content.

But in terms of generating a sense of a world — and the complicated, extraordinary individuals who populate it — Prince-Bythewood brings real feeling to a genre that’s been dominated by ultra-famous, larger-than-life icons. By contrast, everybody in The Old Guard is appreciably human-scaled, and that humanness becomes more important as we reach a finale that’s among the more poignant in all of the superhero movie canon.

We’re used to these films being “cool” or “awesome” or whatever. This one has a sensitivity and vulnerability that might surprise you. Like its immortal characters, The Old Guard is imperfect but trying to be true to itself while doing things its own way. There’s something awfully heroic about that.