The Not-So-Secret Fandom of Gay Men Who Love ‘Playgirl’

Huddled near a chauffeur-driven Rolls Royce in a gothic portico at the Chateau Marmont in West Hollywood, I’m perusing pictures of 1980s Playgirl models with a middle-aged gay man. While Raymar Pineda has spent a lifetime collecting the magazine, amassing hundreds of issues dating back to its inception in 1973, he was decidedly not among Playgirl’s target audience. At least not initially.

In 1971, a nightclub owner in Garden Grove, California, named Douglas Lambert wanted to give Playboy a run for its money. Noting that the sexual revolution was well underway, he “sensed the woman of the 1970s was eager to become part” of it, per early promo copy for his new magazine. “We were put in the back rack in 7-Eleven,” explained Ira Ritter, Playgirl’s president and publisher from 1974 until 1986, in a 2017 oral history of the magazine published in Esquire. “We were a very threatening magazine for men, [and] the newsstands were controlled by men.”

Straight men, that is. “I always thought it was kind of funny that Playgirl, at least nominally, was a magazine for women,” says Matt Breen, my former editor at The Advocate. “It never really rang true for me because who buys nudie mags? Men. Who buys nudie mags with naked men? Gay men.”

Which included Pineda, a slight, 52-year-old bookkeeper with a wholesome grin that belies the fact that the first addition to his Playgirl collection wasn’t purchased. Rather, it was seized by his father, a customs officer in the Philippines, who confiscated the contraband from an American tourist and brought it home. The 10-year-old Pineda lifted it from the china cabinet later that night. “My heart was racing the first time I saw it,” he recalls, noting his devout Catholic household. “In American schools you see guys in the locker room all the time, but in Manila, we never did because it’s so conservative.”

And since pubescent gay boys can’t ogle just one Playgirl, as Pineda aged, he began accruing more and more back issues through various means — either while visiting family members abroad or by shoplifting them at a convenience store near his house that sold U.S. goods. “I didn’t even know erect penises existed,” he explains. “I only knew there was something in front of me that was changing my life.”

Word soon spread to other gay boys in the neighborhood that Pineda had a collection of Playgirls. (One of them, 53-year-old Roy Cruz, joins us at the Chateau; since it’s Easter Sunday brunch, we’ve relegated ourselves to a dimly-lit basement anteroom to thumb through photos of vintage penises.) When the band of queer Filipino preteen comrades would arrive at Pineda’s house, he’d tell them to wait in the hall while he carefully laid out all his Playgirls on the bedroom floor. “We’d then come in quietly to read them and exchange notes,” Cruz says. “Straight boys usually get porn from their fathers, but we had to be guerrilla about it, hiding and stealing issues wherever we could. While [those straight boys] played video games, we read Playgirl and fantasized about which hunk would become our future boyfriend.”

“Like him,” Pineda gasps, pointing to a photo of David White, whose mustached machismo is featured in Playgirl’s October 1976 issue. “This is one I never lent to anyone.” 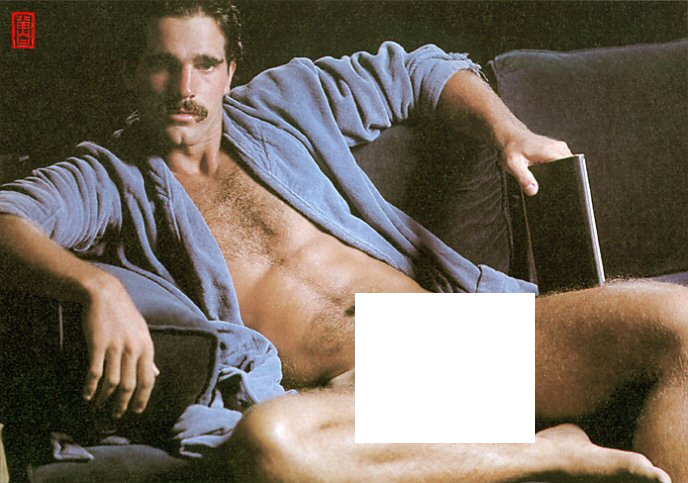 “But it’s the look once again,” Pineda interrupts, pointing to a pair of mustached, Christ-like millennial hipsters entering the Chateau. “It’s back!”

All and all, over the next 20 years Pineda accumulated more than 400 Playgirls, which he taxingly transferred from his bedroom floor to a hallway closet whenever his mother would visit him as an adult. “I tried to sell the collection, but nobody wanted them in the age of digital media,” he says, his voice growing soft as he recounts eventually tossing them into a blue recycling bin to free up space in his cramped WeHo apartment.

Despite its tagline — “Entertainment for Women” — depending on who you ask and when you ask them, Playgirl’s gay readership ranged anywhere from 30 to 100 percent. The most precise number I get is from Jessanne Collins, Playgirl’s managing editor from 2007 to 2008; she points me to an ebook she wrote about her time at the mag, How to Be a Playgirl, in which she cites marketing statistics from the 1990s that put the readership at 60 percent female, with gay men accounting for the balance.

The centerfold in that issue (November 1983 to be exact) was Kory Wolf, a blond prepster. “I guess by today’s standard he looks like a little wimp — no muscle tone with a little slab around his belly — but he was so hot to me.” John blew up my Facebook messenger when reporting that he’d “found a link!!!,” pointing me to Wolf’s archived spread on Blackdogue. “Wow, that brought back all sorts of memories,” he says wistfully. 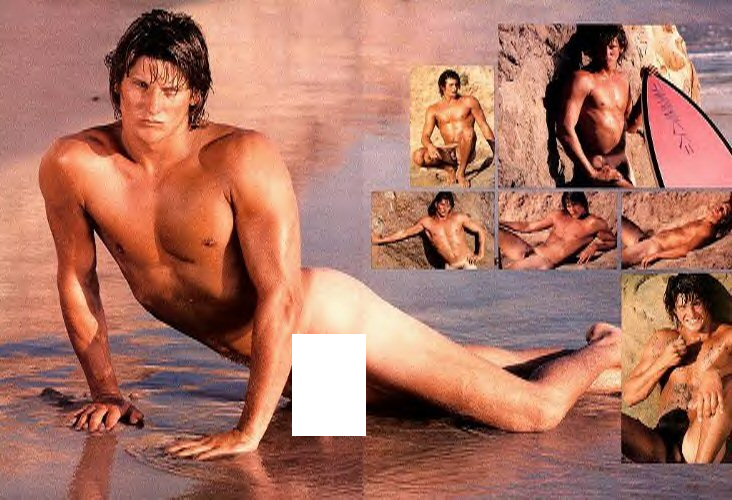 Despite having not visited his own website in years (Blackdogue married his husband in 2014 at which point his interest in gay porn waned), he’s continued to preserve and cultivate the collection as a public service, paying the monthly web-hosting fees out-of-pocket. “Playgirl was a special part of some gay men’s sexual development,” he explains. “They became attached to certain models and often write to me asking if I have any pictures of them.” If he doesn’t — and if the desired issue is before a certain year (due to copyright laws, Blackdogue is only allowed to post images prior to 1995) — he’ll hunt down the images on eBay, purchasing them for $12 to $15 each. He’s happy to do it, he says. After all: “My appreciation of the fandom of others is why the site’s up. I know how important it is to them, so it would be a terrible thing if it came down. Blackdogue is a connection to a magical time in these men’s lives and a memory they want to go back to.”

“[Blackdogue] is one of the most decent human beings on the internet,” says Jamie, a 58-year-old real estate agent and lifelong Playgirl collector in California who proudly introduces himself to me as “the Deputy Dogue,” as he occasionally publishes interviews on the site with beloved Playgirl hunks like Robert Monzi. Case in point: Jamie says Blackdogue is respectful of former models when they email him requesting that he take down their photos. “He knows everybody’s at a different stage in their lives, their thought process and where they land on the Kinsey Scale.” 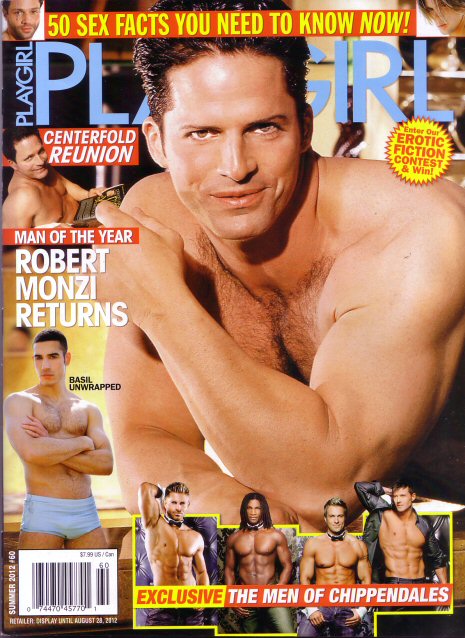 “Most of these guys were just kids at the time — 18 or 20 years old,” Blackdogue explains, noting that their photos were taken for a print publication. “They couldn’t even dream of something like the internet, where their images would be so widely distributed.” Several actually told him they weren’t embarrassed, but their kids were. “I really feel for those people,” he says earnestly. “I feel equally responsible to the former Playgirl models as I do to the gay men who fell in love with them.”

For the editors of Playgirl, their interaction with the latter was often less wholesome. As Collins, Playgirl’s managing editor, tells me, during her tenure in the mid-aughts, the magazine would still receive lots of snail mail in which gay men would go on at length about so-and-so model on page whatever. “The mail was alternately entertaining, totally creepy, a little bit heartwarming and super tragic,” she writes in How to Be a Playgirl. “Frequently, the handwriting on the envelopes was what one might characterize as ‘serial killer,’” she continues. “Just as frequently, it was heart-inflected in the manner of a giddy teenager. Sometimes the pages were tacky or crumby with substances better not wondered about.”

Until now, perhaps. Earlier this month, Nina Renata Aron tweeted that she was tapped as the editorial director of yet another Playgirl relaunch, this time as a biannual print publication. Aron promises her vision of the 50-year-old publication will mirror its “original highbrow feminist 70s spirit” but with “none of the beefcake imagery of yore.”

“Um, then what’s the point?” Cruz reacts skeptically when I tell him of the upcoming beefcake-less Playgirl redux. (Aron insists in an email that she recognizes Playgirl “was certainly beloved among some gay men,” before cancelling our interview minutes before our scheduled appointment.)

After finishing our eggs and Easter ham, Cruz, Pineda and I retreat again to the basement portico for a final viewing session. Pineda finds one of his favorites, a strong-jawed quintessential 1980s hunk in red topsiders named Rob Monroe. “Yes, the Knots Landing look,” Cruz admires.

After a brief pause, he adds, “Playgirl was our definition of beauty.”

“I think you stumble upon things in life that are meant to be,” Pineda says. “That item my father confiscated could have been anything — drugs, candy, whatever. But it wasn’t. It was Playgirl, which was meant for me at exactly the time I was meant to see it.”