The New World of the Post-Coital Vape

How Juul kicked the Marlboro Man out of bed

Beyond the usual grunting, moaning and squealing, there’s another sound emanating from sexual encounters all over the world these days: The sweet crackle of hitting a Juul. “I find Juuling extremely sexy. Someone once told me I made it look good, and I was very into this compliment,” my friend Britney, a woman in her 30s, tells me. “I love to lay around and talk and vape after sex. All that Juul smoke in the air just makes me feel like a technological starlet after I fuck.”

For her, sharing a Juul with lovers has replaced the more traditional postcoital cigarette, while still conjuring feelings of intimacy and glamour that began with the movies. “Hollywood plays an essential role in the way culture has correlated sex and tobacco,” explains Gary A. Giovino, an epidemiologist specializing in tobacco since the 1970s. “The movies weren’t allowed to show sex early on, so a cigarette was the prop that communicated sexual activity.”

Case in point: The final scene between Bette Davis and Paul Henreid in 1942’s Now Voyager. In it, Henreid’s character lights two cigarettes at once and takes a drag from both at the same time before passing one to Davis with deep longing in his eyes. The depth of their intimacy is palpable, even though there’s neither a hug nor a kiss. The only thing they both lay their hands on, in fact, is her cigarette.

Eventually, as smoking became more obviously about sex, these images generated the idea that smoking a cigarette together is a pleasurable part of a sexual encounter. Another indelible film example: Anne Bancroft’s scene in The Graduate, in which her tan shoulders peek out from her white sheets while she smokes in bed. It’s the melty tranquility of Mrs. Robinson’s sedated drags that communicates she’s post-orgasm, smoking her way through the refractory period. (James Bond and Carrie Bradshaw are two other major pop-culture titans who have sold us on the supposed romance of smoking together after we’ve fucked.)

“Some people who smoke consider a cigarette the exclamation point to their sexual encounter,” Giovino says. “Orgasms do stimulate dopamine and smoking a cigarette stimulates dopamine, too, so maybe for some folks it creates a bit more sensation. That’s what drugs of abuse do — hijack our basic biological functions such as sex and eating.”

As for the modern twist on this — the postcoital vape — my friend Pia says, “I juul before, during and after sex. In my experience, smoking after sex was never as fun as the movies made it out to be because often times, depending on who was hosting the encounter, I’d be in a situation where I had to wonder or ask: ‘Can I smoke in here? Do you wanna smoke? Do you even like smokers?’ Juuling after sex is fun because you can take that Juul hit right after a good shag — no questions asked.”

Even when her lover hates nicotine all together, Pia’s vaping is so discreet that she can indulge her habit without ruffling their feathers (or having to get out of their bed). “With smoking, there was more of a chance of awkwardness after sex if you weren’t sure what was desired or allowed in that moment,” she explains. “Then if you did end up smoking a cigarette after sex and they weren’t down for you to smoke in their space, you’d have to get dressed and go outside. And once you’re outside, in some cases, you might as well leave.”

The biggest reason why vaping seems so much different — despite packing a similar nicotine punch — is because of the prevailing theory that juuling is healthier than smoking cigarettes (or at the very least, not as smelly). Early data kinda confirms this, though there are tons of variables not accounted for (e.g., the prevalence of off-brand, lesser-tested “pods” that may not be as safe). Either way, Pia has even been known to include it as part of the act. “I’ve let guys hit my Juul during sex. I’ve also been known to take a break mid-blowjob to take a hit of my Juul,” she says. “I don’t think it necessarily improves the quality of the blowjob, but it looks cool.”

These redditors would seem to agree. In a thread on r/juul called “Mango Pods Got Me Moanin,” one advises, “Rip the juul while getting head. Absolutely game changing.” To which another responds, “Straight facts.” 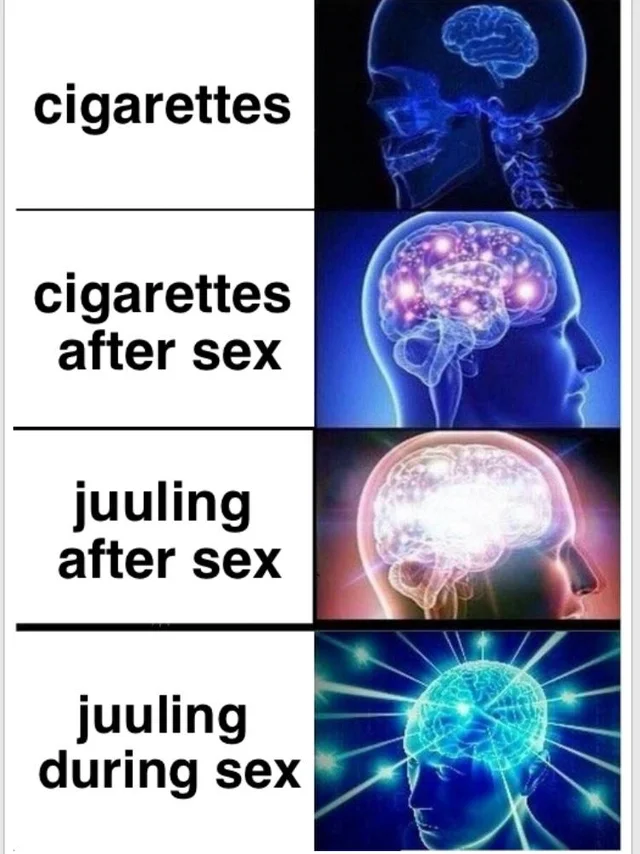 On a slightly different note, for Ashley Manta, a sex coach and self-proclaimed “cannasexual,” her sexual aperitifs and digestifs are always cannabis, not tobacco, based. In this regard, she says, “So much of smoking and vaping after sex is context dependent. If we’re going to bed and not having more sex, I’d choose something sleepy that will help me feel body heavy and sedate. If there’s more sex to come, it’s not really ‘after’ sex as much as it is ‘between’ sex. For that, it would depend if in our next ‘act’ we were going for more energetic sex or slow sensual sex to choose which product would be best. If your muscles are starting to fatigue, I imagine choosing a CBD-rich cultivar would help with some of the soreness of large muscle groups like thighs, glutes and arms.”

Personally speaking, taking a hit or two off a joint during some downtime during or after sex is as customary as taking a sip of water. My boyfriend, who gave up cannabis products a year into our relationship, encourages me to do whatever I want, which is great, but can also be annoying because his respective nicotine habit gives me too much space to flirt with my own love of juuling.

Still, old habits — even with new devices — die hard. “I always hit the Juul after banging,” redditor boovish writes in a different thread about Juul sex. “It’s like putting your penis to sleep in the softest bed you ever felt.”