TNT’s much-delayed adaptation of the Bong Joon Ho sci-fi film tells us everything about class divides, blind zealotry and human nature that we already know

When TNT announced recently that its much-hyped series Snowpiercer would be coming to TV a few weeks ahead of schedule — on May 17th instead of May 31st — the assumption was that the cable channel wanted to capitalize on audiences’ hunger for new shows in the midst of a pandemic. But after watching all 10 episodes of Season One, I imagine executives just figured that the program would play particularly well in lockdown. Here’s a show about a bunch of characters confined indoors amidst a global crisis, their future very much in doubt. Snowpiercer couldn’t have been more in tune with our current dilemma if it tried.

The problem is that the quarantine coincidence is the only way in which this series isn’t intentionally, blatantly on-the-nose. Science fiction has long allowed storytellers to weave futuristic tales that, wouldn’t you know it, actually speak to the way we live right now. But Snowpiercer’s metaphors are so obvious that it’s neither exhilarating nor insightful to see contemporary ills reflected in this so-so show. Mostly you feel trapped on the titular train, which is stuck going round and round.

How’s that for a metaphor?

The series is based on the 2013 film from Korean writer-director Bong Joon Ho, who recently won several Oscars for Parasite, which also studied the divide between haves and have-nots. But his Snowpiercer (itself based on a French graphic novel from the early 1980s) preferred to address income inequality through batshit-crazy genre filmmaking, imagining a dark scenario in which the surviving members of the human race reside in the same train hurtling across the globe after a new ice age, the rich hoarding the resources up front while the poor huddle in the back. A commentary on climate change and class division, Bong’s film was a stylish, hyper-violent odyssey — the kind of movie where Tilda Swinton shows up as a character with a funny accent and weird teeth because, hey, why not?

The Snowpiercer movie was hardly great — funky and nervy, but also kinda silly and derivative of other dystopian thrillers — but it’s far superior to the new series, which at least has the good sense to go its own way in terms of approaching the material. The idea of an underclass uprising is still part of this Snowpiercer, but the TV show has a much more ambitious scope, because how else are you gonna fill 10 hours of programming? What’s missing is Bong’s gonzo temperament, his belief that we should take this story seriously but still relish its B-movie ludicrousness. By comparison, TNT’s version is very earnest, awed by the gravity of the Very Important Messages it’s delivering about our troubled times. Tellingly, the show only gets good when the symbolism takes a backseat to pulpy plot twists and action scenes.

Bong’s characters were never that film’s strong suit, so it’s hardly a problem that the TNT show mostly jettisons them for new protagonists. The basics remain the same: The Snowpiercer is a 1,001-car-long train that contains about 3,000 souls. Its creator, the unseen but powerful Wilford, built the transport for a handful of humanity to ride out Earth’s transformation into a frozen tundra — the result of global warming, war and, y’know, post-apocalyptic stuff like that. In the back of the train, known as “The Tail,” are those who weren’t wealthy enough to afford the high-price tickets and fought their way on board — as such, they’re treated as shabbily as our society treats immigrants and the poor. Led by Andre Layton (Daveed Diggs), a detective before the world went to hell, the so-called “Tailies” live in squalor, hoping one day to overthrow the One-Percenters who live in luxury “uptrain.”

We never meet Wilford, whom the rich passengers adore like a benevolent god, but his liaison is Melanie Cavill (Jennifer Connelly), the diligent head of Hospitality, who cares for both the train and its inhabitants like they’re her children. With her slicked-back hair, crisp speaking voice and serene manner, Melanie projects an air of calm confidence — like the Snowpiercer, she’s a model of efficiency, mechanical but reliable. But what secrets is she hiding behind that professional demeanor?

Whereas the film was largely an extended fight sequence as Chris Evans and his fellow rebels battled their way to the front of the train, the TNT show starts out as a murder mystery. One of the well-heeled passengers is found dead and mutilated — his limbs and genitals cut off — and Andre is the only detective on board. When the victim’s killing closely resembles that of another passenger from a few years ago — and because the suspected assailant for that crime was already put in “the drawers,” a sort of cryogenic-freeze cabinet — Andre suspects that the real murderer has struck again and is somewhere on the train. But who could it be? And while Andre is interviewing the One-Percenters, can he figure out how to penetrate the train’s defenses to storm the engine?

If all that sounds complicated, that doesn’t hold a candle to the offscreen drama that’s ensnared this show since almost its inception. The pilot was shot in 2017, but then series showrunner Josh Friedman was dismissed, and the pilot’s director, Doctor Strange filmmaker Scott Derrickson, refused to do reshoots. (James Hawes is now credited as the first episode’s director, with almost the entire original pilot shelved and redone.) Little wonder that, for quite some time now, this Snowpiercer has been viewed as a troubled production — a train wreck, if you will. 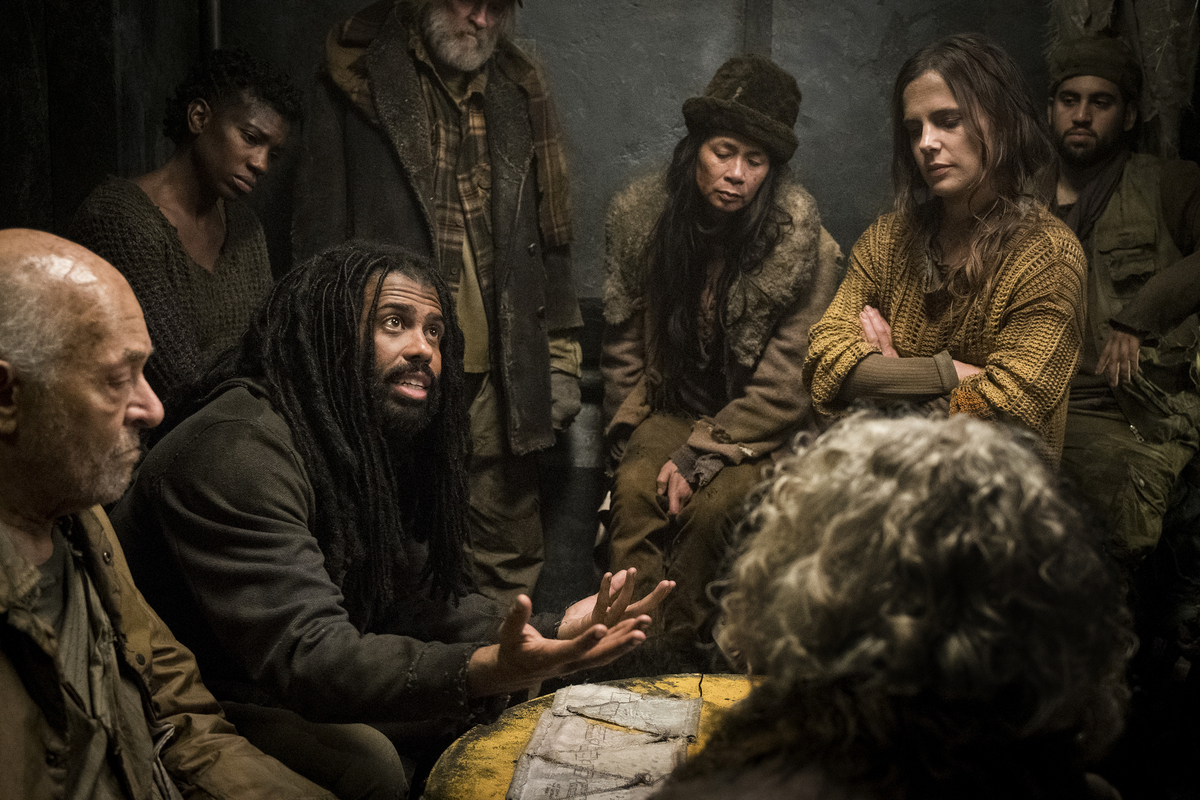 Those hoping for a hilariously embarrassing disaster, however, will be disappointed: Snowpiercer is mostly just tedious, a lumbering, overly busy whir of plot and palace intrigue. Allegiances shift and new characters become crucial contributors to the overall story, which becomes less of a whodunit and more of a grand buildup to the eventual battle royale for control of the train.

But throughout, the show (now guided by Orphan Black­ co-creator Graeme Manson) hits you over the head with its thematic import. The show has been advertised as an exploration of “[c]lass warfare, social injustice and the politics of survival,” and no doubt the grim setting will be manna for viewers looking for easy parallels to our reality. It’s not just that everybody on the Snowpiercer is cooped-up — the air outside the train is so cold they’d freeze to death instantly if they opened a window — but they’re also wrestling with the same intractable problems that plague us in real life. The rich exploit the impoverished. The powerful are above the law. The masses put their faith in a phantom figure, who may not have their best interests at heart. The train is a metaphor for late capitalism, don’t you get it?!?

Sure, the whole thing is very “timely,” but it’s not particularly interesting.

There are some rewards for sticking through the end of Season One. Connelly finds ways to make a seemingly one-dimensional character — steely and ruthless — into someone far more complicated and human. (Is Melanie the villain we think she is? Or is our growing sympathy part of her nefarious plan?) And when the revolution begins to stir, Snowpiercer gets more exciting, trading talk for action and suspense.

But for the most part, I couldn’t shake the fact that I was watching people in a worse situation than me that I couldn’t wait to escape. As much as Snowpiercer will draw comparisons to Bong’s film, it also bears striking similarities to the rebooted Battlestar Galactica, which (for a few seasons, anyway) was the best post-9/11 show. That SyFy series — also about the last vestiges of humanity stuck inside a big, moving hunk of metal — felt like it was dissecting the Dubya years in real time, discussing torture, grief and terrorism in terms that echoed what all of us were feeling.

This new Snowpiercer has that show’s grungy, realistic approach to sci-fi, but none of the imagination or inspiration — it doesn’t feel urgent, like it’s on a mission to tell us something meaningful about our times. It’s fortunate that Snowpiercer has now lucked into the good timing of coming out during a pandemic — it’s the only way in which this leaden series feels resonant. And that was entirely by accident.