The Men With Urinals in Their Homes

Having heard their stories, I’m now convinced that a urinal is the greatest possible fixture you could ever add to your home

If you look online, you can find countless articles about why you need a urinal in your home. From The Guardian to Men’s Health to Apartment Therapy to Marketplace, they all boast about how the urinal is great for saving water; how it’s more sanitary than a regular toilet; how it’s perfect for a man cave; how it will eliminate the need to lift the seat up; and most importantly, that you should get one simply because you can.

But who are the guys who actually have these urinals? As it turns out, there are a fair number of them, and while each has their own reason for wanting an at-home urinal, they all agreed on one simple truth: Having a urinal in your home is nothing short of amazing. 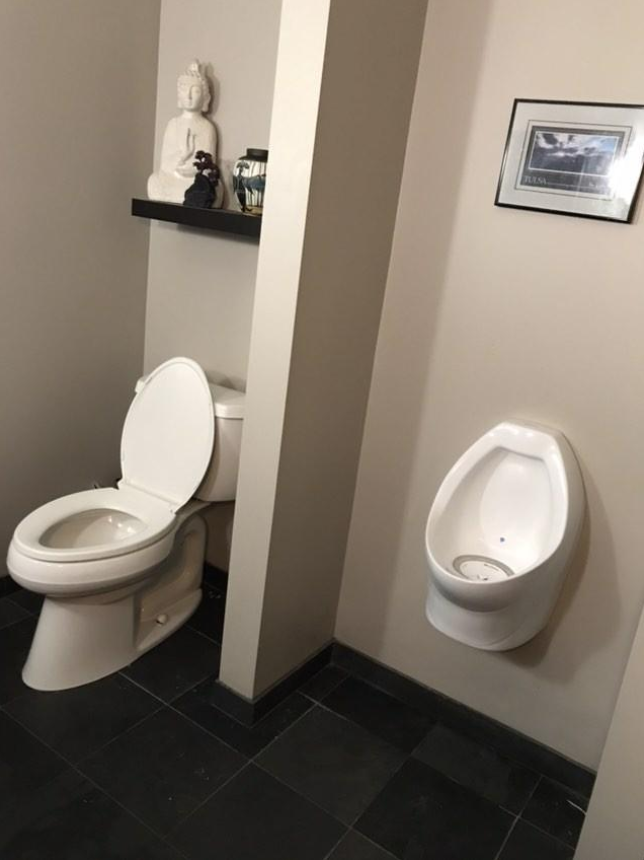 I found Kris by searching Instagram for #homeurinal, where he announced, “In my master bathroom, we’ve solved the problem of leaving the seat up.” When I speak to him, Kris explains that he’d bought his house with his partner in 2013, and the master bath needed expanding. “We punched out one wall and put in a big shower. We had this drain left over from where the old shower used to be, so I had the idea of putting a urinal in there because we had the space and we already had the plumbing for it.”

“For two men, it works nicely and it’s also waterless, so there’s an environmental advantage,” he continues. “The urinal is convenient for all the same reasons it’s convenient in public toilets. I can see why a woman may not see the advantage of it, but for guys, we’re used to using it, so it just seemed to make sense to have one in our home. Most of our friends are men and they always say that they want one in their house when they come over to visit, but you have to have the wall space and the plumbing for it, so it’s not an easy remodel. For us, it just made sense. It wasn’t like it was some statement or anything.” 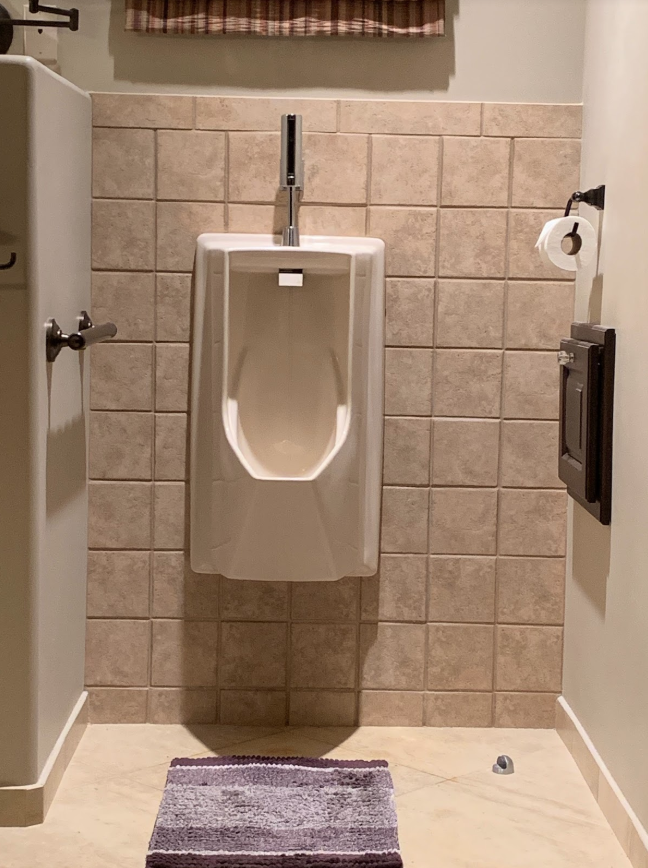 After telling my Facebook friends that I was searching for men with urinals, I was led to Jerry via a mutual friend. Jerry says that he had his urinal installed a few years ago and now he believes it’s the single-greatest feature in his home. “We were in the midst of redoing our bathroom, and one night my wife woke up at 3 a.m. with what she called an ‘epiphany.’ The next morning she told me, ‘We’re not going to have a bathtub, we’re going to have a urinal!’ I didn’t say anything — she’d already made up her mind.”

“Economically speaking, it was the right decision to make,” he adds. “It was a $500 urinal against a $10,000 bathtub. I’m 81 years old, so I’m of an age now where I get up a couple of times during the night to use that urinal and it’s really convenient. I must use it a half dozen times a day whereas I have no idea how often I would have used that big tub — we take showers anyway.

“Whenever I have a guy friend over, I have them go in the master bath and use the urinal. Everybody gets a real kick out of it. Even the women are impressed! I think it’s because it’s something out of the ordinary — people don’t expect it to be there, so when they see that I have a urinal, they love it. It’s also impressive because it’s got a motion sensor on it, so you don’t even need to flush it.

“Now, I’m fortunate enough that I live in a nice house. I’ve worked hard for it over my years and the house has a lot of nice features in it, but I tell you, the number one thing that people always talk about in my home is that urinal. People just love it.” 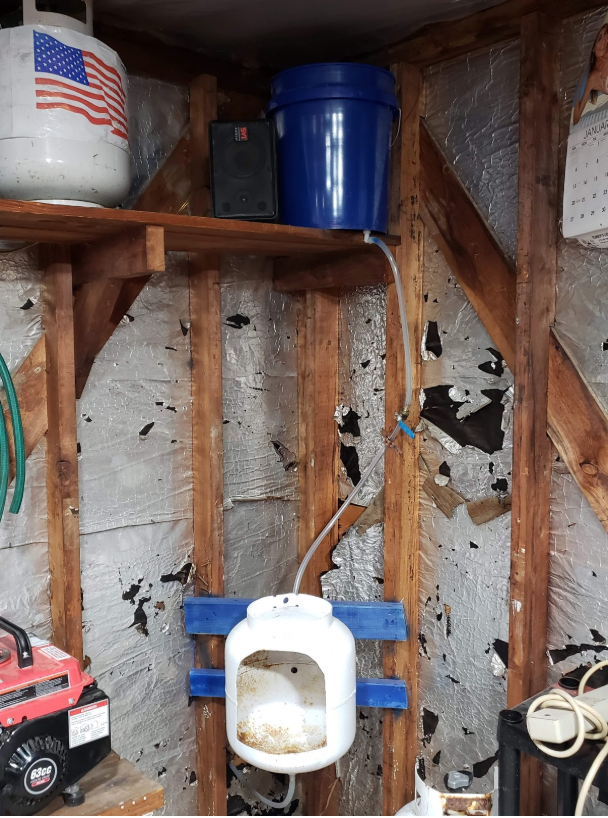 I found Tom after seeing his YouTube video about his “homemade garage urinal.” That’s right: Unlike other urinal owners who went and bought their urinals, Tom made his. “I live in Michigan, and the weather is pretty cold for half of the year,” Tom explains. “I’m pretty handy, so I decided to make a urinal to put in my garage since I spend a lot of time out there and it’s no fun peeing outside when it’s zero degrees out.”

“I kind of made it up as I went along. I started with a propane tank that I safely cut open, then I got about $20 worth of fitting to make a tube to go out to the alley. I also made it so that it can be flushed by putting a bucket above it with a tube with a valve on it. That way it doesn’t get nasty, especially when I have my friends over and we’re out there drinking. On nights like that, we may use the thing 10 to 20 times — the urinal is over in the corner so it has a decent amount of privacy to it.

“All told it took me about four hours to make it. I didn’t tell my wife what I was up to, I just presented it to her when it was all finished. At first she was really embarrassed about it, especially since I put it on Facebook and YouTube, but now she doesn’t care. That’s only because it’s out in the garage, though — if it was in the house, she’d probably kill me.” 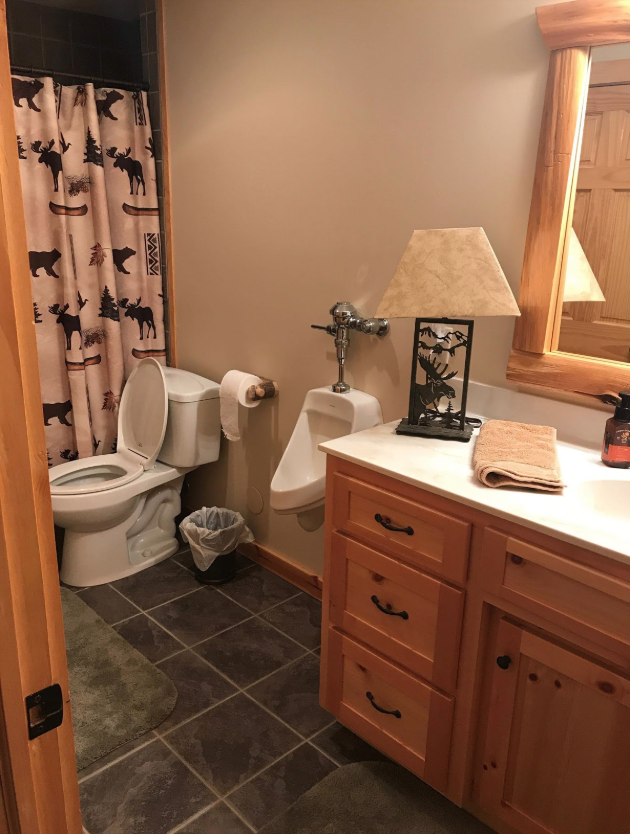 I found Curt Slater by searching #homeurinal on Twitter (a friend of Curt’s had marveled at his home urinal so much that he just had to tweet about it). When I reach out, he was happy to share that he’d been inspired by a urinal in a friend’s basement, so when it came time to redo his own basement, he knew he needed a urinal for himself.

“My philosophy with my basement was that I always wanted a cabin on the lake, but I knew I’d never be able to afford it, so I built my cabin in my basement,” says Curt. “When we were designing it, my wife and I each had our list of things we wanted, like she wanted the river rock by the fireplace and a double sectional couch; I said I wanted a urinal, so I got that and she got something that she wanted. Honestly, it’s the best move I ever made.

“See, before, whenever I had my buddies over, my wife would remark about how sloppy we all were, and now with the urinal, it cuts down on the splashing and it’s much easier to clean. It also just looks like a nicer bathroom with the urinal in there; it really adds to the decor. A lot of people are shocked by it, especially women, but I’ll tell you, I put it in there seven years ago, and since then I know nine other people who have put urinals in their homes after seeing mine.

“The only thing I’d watch out for is if you have really little kids. I’ve had a few friends over with kids that are like two or three years old and they love to play in it, but aside from that, it’s great.” 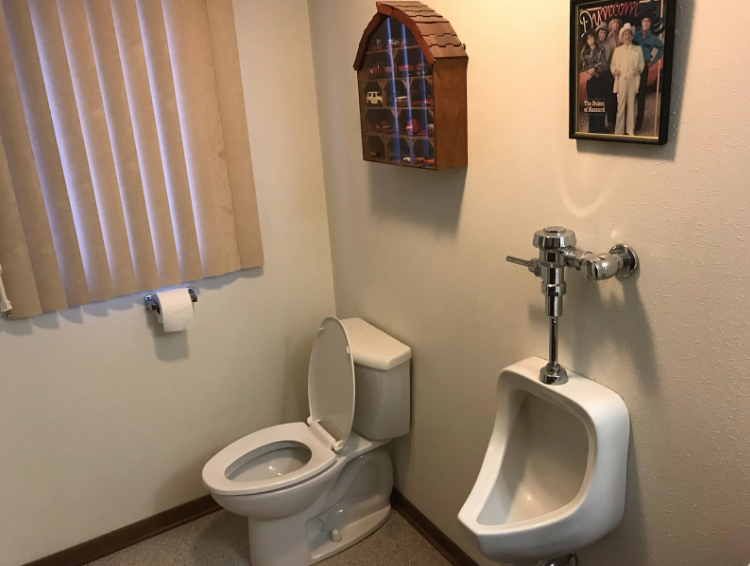 My conversation with Curt led me to Steven, who owns a farmhouse with a urinal in the basement. Curt explains to me that Steven’s late brother, David, had inspired him to put a urinal in his own home, so he tells me that I should call Steven and talk to him about his brother.

I actually caught Steven while he was en route to the farmhouse and he was happy to tell me the story of how a urinal ended up in his brother’s basement. “About 20 years ago, my brother David purchased a place called Becker’s Pool Hall in the town of Sanborn, Minnesota,” Steven begins. “The owner had died, and my brother bought the whole place lock, stock and barrel. Not the building, but he bought everything inside, from the floors to the ceiling tiles and the booths and the pool tables, as well as the bar and just about everything else. It had been around since the 1930s and had never been updated, so there was a lot of history in it.”

“A few years later, David bought this farmhouse and had all of that old furniture restored,” Steven continues. “He put it in the basement of the farmhouse and when it came to the bathroom, while he hadn’t bought the urinal from the bar, he figured that if the basement is going to look like a pool hall, it ought to have a urinal in it, so he had one installed two feet from the regular toilet. My mother, who’s still alive at age 85, had a problem with it at first, but eventually my brother assured her that two people weren’t going to be in the bathroom at the same time, so she need not worry.

“He loved that basement and so did the people from the town who had all gone to that pool hall growing up. It’s kind of like the history of the town of Sanborn is in his basement. Let me tell you, the place is like the ultimate man cave — it has a bar, a pool table, a jukebox and a pinball machine, and when you need to relieve yourself, you’ve got the urinal right there.”

Finally, I ask Steven if he personally finds the urinal to be more convenient. He defers to a friend of his late brother who was in the car with him. “John-Frank, how would you respond to that?” Steven asks. “It comes in handy for me!” John-Frank replies, explaining, “Any senior citizen will tell you that when you sit down, it can be tough getting back up, so if you can stay standing, more power to you.” 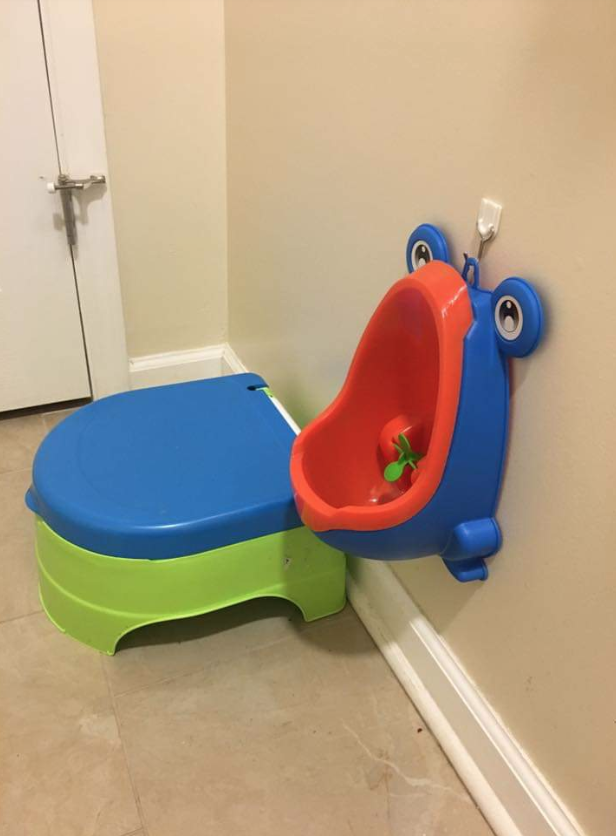 Then there’s Tioka, an old friend of mine from high school, who recently purchased a very different kind of urinal for his two-year-old. “We got it about a month ago, and it has yet to be used successfully,” Tioka says. “There’s been a lot of attempts, and he definitely is interested in it because it looks like a frog and has a little flippy thing to aim for like he’s playing mini-golf. I’ve tried to show him how to use it in like a side-by-side thing, like this is what daddy does, and this is was you do. So far it seems like he gets it, but that he’s just not ready to do it yet.”

Worry not my friend: He’ll get there soon enough. After all, he has the allure of a home urinal to show him the way.