The Men Who Try to Hack Tinder to Score Hotter Women

Aggrieved that their matches aren’t ‘quality’ enough, they share techniques to cheat the dating app’s algorithm and raise their status

I should probably start things off by admitting that I’ve never used a dating app, and probably never will. I’ve already swiped left on everyone in real life, and I don’t get a euphoric bump from some guy named Chris in Sherman Oaks wanting to (poorly) fuck me.

But I understand that I’m not the norm and that most people do use some form of them. Which brings me to the topic at hand: Recently, a friend said something about Tinder that piqued my interest — namely, he was being fucked over by its algorithm. In his words, it would only show potential matches who were on the same level as him. (I’m sure you can guess that this outraged dude was a five — at best.)

As I wept for every woman who’s ever had to settle, he went on to explain how, not to be denied, he’d figured out a way to get to the sweet land of sevens and above. Basically, he just had to swipe through all of the women who were at his level of desirability, at which point Tinder would have no choice but to give him the opportunity to ruin the lives of women too good for him (which is technically every woman, but you know what I mean).

A Tinder novice, I decided to fact-check his theory once he left. It turns out the Tinder algorithm was derived from, of all things, the Elo rating system, which is used to rank the skills of chess players. Essentially, the more right swipes you receive, the higher your “desirability score.” However, not all swipes are equal. If you get right-swiped by someone with a high Elo number, that’ll raise your score even more. And once those factors are calculated, you’re shown to other users with a similar score. (Tinder didn’t respond to my request for a comment.)

Needless to say, people find this incredibly unfair, especially — you guessed it — men. There are whole Reddit threads devoted to aggrieved males bemoaning how shallow swiping can be. To be fair, men do make up the majority of Tinder users, so it makes sense that a low score would hurt them more. But God forbid women have an advantage (and I use that word loosely) in anything. So how about upping your fucking game, Bryson?

Still, the complaining about Tinder’s desirability score became loud enough that in March, the company wrote a blog post outlining how the Elo number wasn’t the only factor the algorithm considered. Not everyone was buying it, however, and men online continued to obsess over ways to get shown hotter people and more matches. 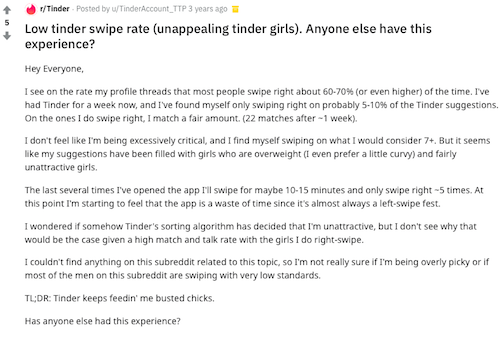 Like most apps that have a pay function, the easiest path to a better Tinder experience is with cash. Super Likes, according to the app, will triple your chances of getting a match as they’re a manual override of the algorithm, forcing you to the head of someone’s swipe queue. You still have to earn a right swipe, but the person is all but guaranteed to see your profile.

Then, of course, there’s the various DIY swipe combos and techniques, like my friend’s, that people are convinced will result in better matches. “I cracked Tinder,” redditor joikol exclaimed on the Tinder subreddit a year ago [sic throughout]. “I had cracked how to not only get the hottest girls to appear, but also how to make my profile appear on their Tinder. The trick: for every girl you like, reject 5 girls. Or, in simple terms, have very high standards for liking girls. The Tinder algorithm will see that you’re not satisfied with the lot you’ve gotten and improve its delivery. It will also think that you’re some hotshot and make you appear more on girls’ Tinder.”

But alas, he continued, “Then I realized that this strategy was a fail because when you do this, you need to be 11/10 as well. The hot girls won’t swipe right on you, and the average ones won’t be available as you swipe left on them.”

According to Tinder, however, the biggest booster is using the app the way Satan intended — lots of interaction, messaging and engagement, spread throughout the day, with no extended periods of inactivity. So, you know, the worst part about dating: Engaging with other humans.

Anecdotal evidence would seem to support this assertion. “I swipe right on everyone and leave a comment,” says Justin, a 46-year-old in Utah. “I get loads of matches and the quality of matches exponentially rises. Plus, it’s fun. Everyone has a story they want to tell.”

Yet, he admits, “I could be 100 percent wrong and wasting enormous amounts of time.”

“I think Tinder has tiers,” he continues. “New users start on the bottom tier, which is also the most populated one. As you gather matches, you go up in tiers depending on how many matches you get. I also think that replies and how active you are plays into the algorithm. And as you climb the tiers, you have opportunities for matches with others who have climbed the tiers.”

As for my friend, he eventually got banned from Tinder even though he claims that he hadn’t violated the terms of service. Luckily, I was there to convince him that suing Tinder for violating his civil rights would make it impossible for any woman to ever get wet for him again. And because I saved him from being labeled as unfuckable, he went on to meet someone in a way where the only algorithm he had to overcome was his entitled personality — through friends.