The Men Who Are Addicted to Chewing Ice

Javier, a 27-year-old in Florida, fondly recalls his mom yelling at him in restaurants for chewing the ice in everyone’s cup — just like his father. “My mom would chastise me,” Javier says. “Then she’d turn to my father, who’d also be chewing ice, to blame him for teaching me.”

Javier’s chewed ice every day for more than a decade, despite seeing his ice-chewing father lose multiple fillings from the habit. In fact, instead of quitting the habit, he bought a $500 ice machine that makes easier-to-chew “pellet” ice, similar to what you’d get at Sonic.

But even the special equipment doesn’t make what Javier considers to be primo ice — that like the bottle of ice he once left inside his car for 36 hours. “There must have been only one-third of ice in the bottle left when I went out to get it,” he explains. “I went to chew it, and as it hit the warmth of my tongue, it felt like glass cracking sounds. I’ve been chasing that dragon ever since.”

In hopes of catching said dragon, he’ll fill an insulated water bottle with a specific mix of ice and room temperature water, before letting it sit for 12 hours. “I’ve jokingly referred to this as ‘aged’ ice,” he says. “Slowly, the ice melts and becomes skeletal in a way, light and almost flakey. I see it in my head like those commercials when they pull a croissant apart, and the inside layers are thin and airy. It’s like that, but cold and contained in my mouth.”

While Javier has never tried to quit chewing ice, many like him have. Because ice-chewing falls in that weird grey area between harmless habit and something more serious. Like, on one hand, who doesn’t chew ice on occasion? But on the other, people like Javier will carry around a glass of chewing ice for so long that their hand goes numb.

This type of ice-chewing can be a sign of an underlying medical issue like an iron-deficiency or “pagophagia,” the ice-eating subset of an eating disorder called pica, in which people crave food that doesn’t contain any nutritional value (e.g., dirt, hair or ice). Meanwhile, some of those who have overcome their ice-chewing compare the craving to chew ice similar to the craving to smoke a cigarette.

Ice-chewers find community in places like icechewing.com, a forum dedicated to helping them discuss their habits, or the less-serious subreddit r/IceChewersAnonymous, where they rant, rave and post memes about chowing down on ice. 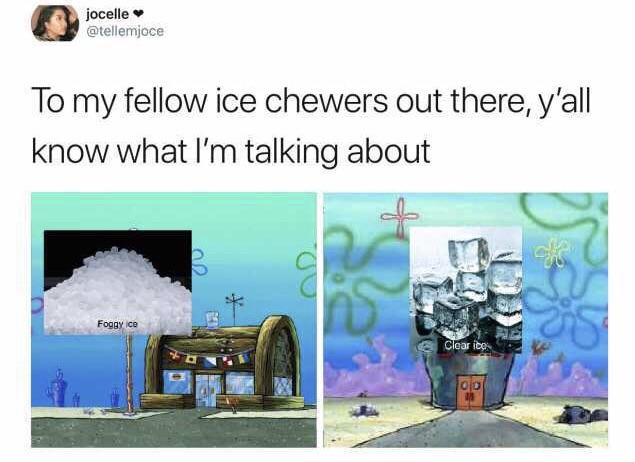 Notably, the ice industry has taken notice. There are several small ice machines like Javier’s that promise Sonic-style ice specific for chewing, and to the glee of r/IceChewersAnonymous, vending machines that offer “chewable ice” as well. The increased marketing and availability of “chewable ice,” of course, becomes a bit more sinister when you learn that pica is considered among the most common eating disorders, even though researchers believe it’s severely underreported.

Ask the ice-chewers, though, and they’ll tell you, “Chewing ice is normal, if not healthy.” And so, in addition to Javier, I spoke to three other men who love the cold stuff to better understand why crushing it with their teeth brings them so much pleasure.

“There’s no treat sweeter than a hospital cup with nugget ice.”

Javier, 27, Florida: It’s easy to find an ice fix where I live, because almost every non-alcoholic drink you buy comes with as much ice as you want. So if you go grab takeout, you can ask for a cup of ice and the person working the counter won’t even bat an eye. At this point, I chew with every meal except breakfast. If I’m out at a bar, I’ll order a beer and ask for a water chaser basically to chew the ice.

The ice maker I bought ran about $500, but I chalk it up as medicinal and preventative care, since the ice is better to chew than the hard ice from the freezer. The best nugget ice you can get, though, is at the hospital. I think it has to do with the comfort chewing brings and the anxiety and nervousness I experience when I find myself in a hospital. Honestly, there’s no treat sweeter than a hospital cup with nugget ice.

If I’m with a group of people and we can’t make up our minds where to eat, I’ll bring up the quality of the ice at a restaurant to help make the decision. On the negative side, my ice-chewing has changed the way I drink, which has affected my relationship. Basically, if my girlfriend and I are sharing a drink at a movie, I’ll mindlessly finish it just to chew the ice, screwing her out of the majority of the drink. This was a hang-up in our relationship for a while, and she still doesn’t trust me to hold the cup. Also, related: The first time I was invited to eat at her house, her father commented that I must be a slow drinker because I held onto my cup after I took my plate to the sink. That’s when it hit me that this wasn’t as universal as I thought.

I’ve never talked to my doctor about my chewing. My dentist has warned me about it, but that’s because I was chewing in the waiting room. I have anxiety issues and I’ve chewed my nails since I was in middle school, so I feel like ice-chewing is another outlet for my anxiety, especially now that I’m in a high-pressure, high-stress job. Honestly, it’s now just an integral part of my life.

“I get rather anxious if I can’t have some ice in a drink.”

Bruce, 35, Outback Australia: I’ve been chewing since I was a young lad. My dad was an ice-chewer. Mum, too. The rest of my so-called family think ice is just cold water. Such people don’t deserve the family’s good name.

The best way I can describe the pleasures of chewing ice is to imagine the sound of an iceberg breaking free and collapsing into the ocean. That’s the kind of experience one has when chewing ice.

I do get rather anxious if I can’t have some in a drink, but I wouldn’t consider myself addicted. My drink just has to be cold — really cold — otherwise it’s basically useless, because I’m generally super warm, and I have a hard time cooling down in any sort of weather. I also like the texture of ice more than the flavor. My wife was a chef, and she was surprised to discover that my favorite foods are those with the least flavor but crunchiest texture.

Quitting is hard because I’d stop hydrating myself, especially knowing I’d have to drink without ice. So when I have no way to get or make ice, I dry up and can only drink something if it’s still very, very cold. Once it’s no longer cold, I just can’t.

“I knew right out the womb that I needed to sink my gums into those cold, deliciously textured morsels.”

Ryan, 27, Florida: I wouldn’t be surprised if it started when I was teething as a baby, chewing it to alleviate pain and numb the gums. Otherwise, it’s like I knew right out of the womb that I needed to sink my gums into those cold, deliciously textured morsels.

Today, I’m typically a functioning member of society, save for my exceedingly loud crunching at the table where everyone else tells me, “Would you like some water with your ice?”

Unfortunately, however, I work on a cruise ship at the moment, and while the ice matches a texture I enjoy (like it’s made out of carbonated water), it just tastes stale. I know that sounds dumb — water is obviously tasteless — but cruise-ship water is especially tasteless. Maybe it’s because of how it’s filtered, I don’t know. That said, the bar has decent ice with a good taste, but it’s a different texture — more glassy, if that makes sense. I don’t care for it, but it’s the best option I have.

It’s good enough, too, that sometimes at work, other bartenders will be busy making drinks and I’ll get so pulled into cronching on some of it that I won’t notice to help out. For a split second, I think I should stop, but I just keep going, unable to stop even if I wanted to.

“I’ve chipped a tooth and tried quitting a few times over the years, but with little success.”

Zach, 21, Arkansas: I’ve been chewing ice for about 13 years, going through two or three pint glasses of it a day. It’s an intense enough habit that one time, back in seventh or eighth grade, I hiked a mile from the campsite I was at to get a bag of ice. Unlike the rest of the ice-chewers online, however, I don’t think Sonic ice is all that it’s cracked up to be. I enjoy it at first, but it’s way too soft for my taste. I much prefer ice that’s been sitting for a while, maybe 30 minutes or so, and has gotten almost soft but still has a nice crunch.

I’ve chipped a tooth and tried quitting a few times over the years, but with little success. I can go a few months or so without chewing, but then I forget that I’m trying to quit and the cycle starts all over again.