It took a professor nearly 20 years to grow the legendary bloom, but does it really smell like rotting flesh?

Along with hundreds of other people, I’m waiting in line at the Washington State University Vancouver (WSUV) campus to smell rotting flesh. Or more accurately, I’m here to  bear witness to Titan Vancoug, a specimen of Titan arum, known to most as The Corpse Flower. Titan is the world’s largest unbranched flower, but endangered in the wild and only cultivated by a hundred or so horticulturists in domestication. Oh, also, when it’s in bloom, it smells like rotting flesh.

While most flowers aid a plant’s reproduction by attracting insects with pretty, bright colors and the promise of pollen or nectar at their bases, the Corpse Flower takes a counterintuitive approach to attracting a pollinator. Namely, it simulates the sensory experience of a moldering corpse by producing a hideous scent with traces of sulfur and other terrible smelling organic compounds. This process tricks flies, maggots and other connoisseurs of dead flesh, who approach the flower, looking for delicious, nutritious rotting blood, and in the process, help the Titan make seeds (even if afterward they presumably leave in a state of frustration when pollen or nectar is nowhere to be found).

Steve Sylvester, a professor at WSUV who raised the Titan Vancoug from a seed 17 years ago, and Dawn Freeman, who will be taking over the reigns when Sylvester retires after next year, have both described the smell as being akin to rotting fish. Meanwhile, Jeannette Hurt, a WSUV police officer and the first person to figure out that Titan was in bloom, tells me that she occasionally deals with dead animals on campus and claims that the flower is an “exact match for a dead animal,” and that the smell “coats your mouth.”

When I reach the 4-foot flower, which sits behind a cage and a few potted maples, I’m a little disappointed at first. It had started blooming at 8 p.m. the previous night and is sort of fading out of the “smelling like rancid raccoon ass” portion of its reproductive cycle. But when I’m no longer absolutely wrecked by a powerful corpse scent, I’m taken with the flower’s beauty. Its outer pedals have a green gradient of colors you’d expect to see painted on canvas or a wall, but totally foreign to anything you’d expect from nature. At the same time, the inside is marked with a brilliant, deep purple, with little streaks of pink. 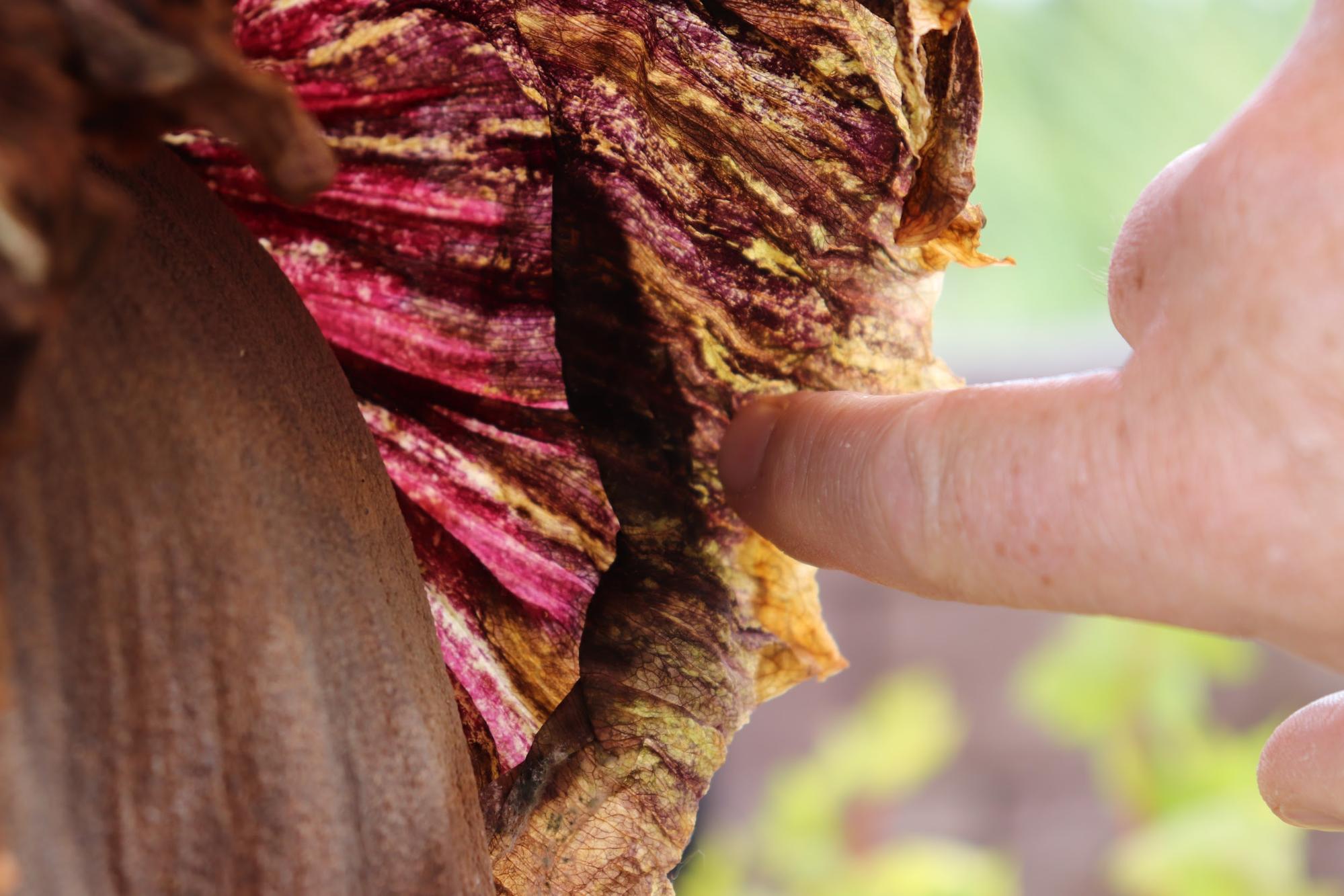 The Titan’s mighty, stinky bloom is the product of nearly two decades of nurturing from Sylvester, a long-time WSUV molecular biology professor whose work has nothing to do with botany or horticulture — he’s simply taken it on as a hobby. He got the seed from a greenhouse-bound plant at the University of Wisconsin that’s known to the world as “Big Bucky.” “The seed was about as big as my thumb,” he explains. “It was red, and maybe a little juicy inside, like a gigantic pomegranate seed. I put it in a little pot, added water, and sure enough, up came what looked like a little baby tree.”

Sylvester’s approach to raising the plant was improvisational curiosity. It grew on a little pot on his desk for a few months and then appeared to die. He chalked it up to the fact that the Corpse Flower is more acclimated to hot, humid climates — it’s native to Sumatra, an island in Indonesia — and the Puget Trough ecoregion is certainly neither. But it came back, lived for three more months, only to die again. Yet it also kept reemerging, bigger and bigger each time. Eventually, Sylvester had to move it from his desk to his lab, and later to a glass-encased stairwell, where air conditioning in the summer and students entering and exiting during the winter exposed the plant to chilly temperatures that its mother probably didn’t prepare it for. Similarly not good for its life expectancy: Sylvester wasn’t allowed to use the greenhouse, as his stink flower experiment had nothing to do with his ACTUAL research, which primarily concerns animals.

Still, the Titan ground on, year after year. There was a setback during year eight, when someone took it upon themselves to water the plant more during one of its death cycles, and its tuber-root structure split off into four smaller, more immature tubers and restarted the process all over again. (Was that frustrating? “Well, yeah,” says Sylvester. “But what are you gonna do?”)

When this June rolled around, Sylvester figured there were five or so days to go before the Titan let its stink loose. But one evening, after a particularly humid day in Vancouver, after 17 years of growing, dying and re-growing, the full bloom of the Titan Vancoug emerged. “We have multiple cameras on Titan Vancoug,” says Hurt. “I was working the night shift, and I have to keep my eye on Titan — for security and also out of personal interest. Titan has been a part of my rounds for all these years. I really like the plant, and I check on it every single night.”

As for that particular night, she adds, “I thought my mind was playing tricks on me, or the camera angle, who knows? Then, a little teeny girl walks into the picture, and she takes her shirt and puts it over her nose. I jumped in my patrol car, and I could literally smell Titan through the car. Even at about 20 feet away in my patrol car, he was absolutely horrible smelling.”

The early bloom, which Sylvester and others believe was brought on by an abnormally humid day, took everyone by surprise. “This plant has done whatever it wants,” explains Freeman. “We weren’t expecting it to bloom for another week or so, and then it just did.”  They’d been planning on selling T-shirts for the occasion, but it was too soon to get them from the printer — the bloom was on, and it was only going to last for a day or so. Instead, they got the word out and set up a fence around the plant to protect it from what was sure to be an onslaught of gawkers. 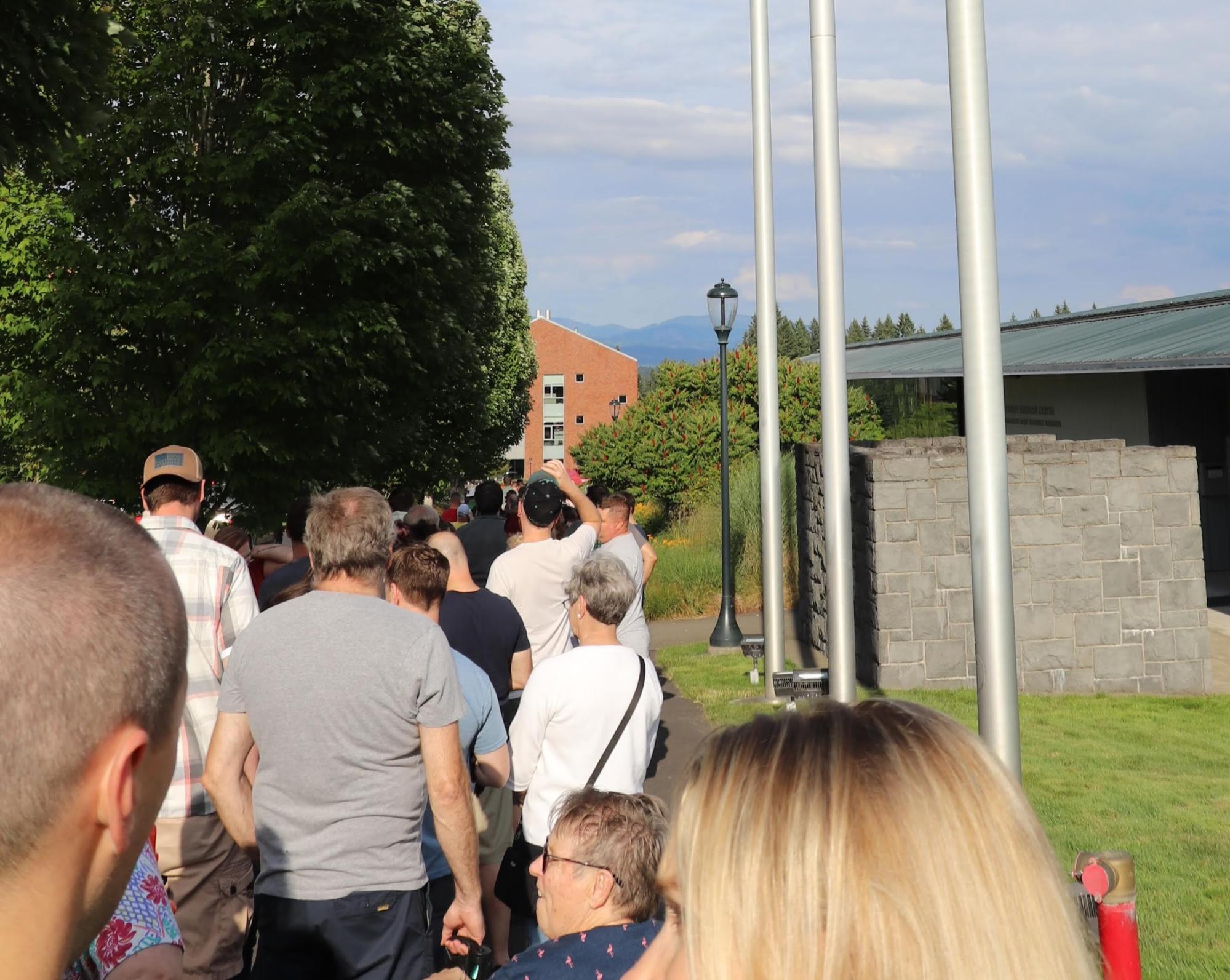 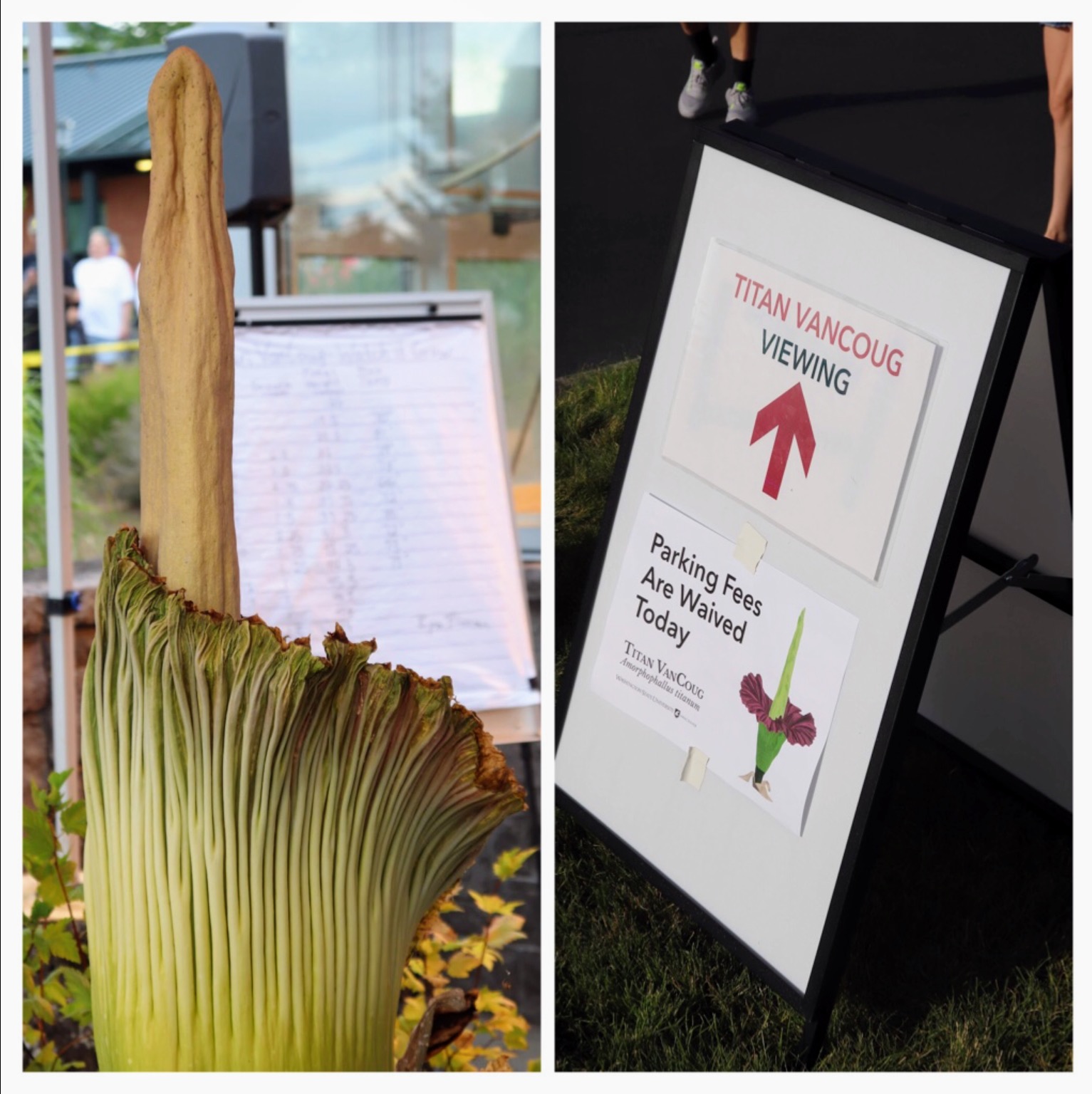 I ask Sylvester how he felt when he first smelled the plant he’d been growing for nearly two decades. It must be strange, I figured, to put so much effort into growing something that ultimately exists to produce a hideous smell — a mixture of disgust and pride. “It was mostly pride,” he responds. “And to me, it didn’t smell as bad as other people presented it. At one time, my eyes started watering, but most of the time, it was pretty tolerable. I work with some of the chemicals it produces in my laboratory.”

Still, I parry, “When you smelled it for the first time, it was disgusting, right?”

“Well, yeah,” he admits. “But you need to experience that at least once.”

Corbin Smith is a writer from Vancouver, Washington. He is one of The Evergreen State College’s most celebrated alumni.