The Catfish Soup That Bonded My Dad and Me

‘Food was his way to inspire admiration and pass on lessons to me — to be brave, to be open-minded, to appreciate life without fear of the uncertain (including jarred oysters, raw fish, mystery innard tacos and strange-smelling stews)’

Eddie Kim is a features writer at MEL, reporting primarily on stories about pop culture, food and social conflict. He edits the biweekly Eat Your Heart Out column and is the first in a special Father’s Day series of men talking about a dish that brings as many memories of Dad as it does flavor.

Delano is a dusty little town in the middle of California’s Central Valley, the agricultural heart of the state. I spent the first five years of my life there, and most of my memories of the time are hazy and fragmented. I couldn’t tell you what shitty one-bedroom apartment I grew up in, or what park my Korean immigrant parents took me to, or even the location of my preschool, where I quietly cried in the bathroom on the first day of school.

What I do remember, though, are the endless fields of table grapes, and the dust that colored the sky beige when the winds roared in from the east. I remember a mural of the civil rights activist Cesar Chavez, an icon in Delano for his role in rallying workers in the face of oppressive farming practices. I remember Mexican food: flashes of backyard carne asada, the surprising burn of jalapeño chiles and my cravings for silky refried beans. And throughout it all, I remember my father, standing nearby, urging me to touch, smell, and most of all, eat. He wanted me to try everything he loved. To refuse a new flavor or morsel would be a disappointment in his eyes. I was more than happy to receive.

One day, my dad took me to a Mexican restaurant I’d never seen before. I can’t tell you what it was called. My imagination suggests it had red ceramic shingles on the roof, and an old eucalyptus tree casting a shadow over the parking lot. I can envision the old formica tables in the dining room, and my dad carrying a red plastic tray with a giant bowl, filled to the brim, alongside a plate of warm corn tortillas, lime wedges and a dish of smoky red salsa. “It’s catfish soup. I just had it for the first time last week, and I wanted you to try,” he told me.

I looked into the bowl. The soup was the color of burnished brick, clear and brothy with some glossy droplets of fat floating on the surface. Pearly white hunks of fish bobbed next to carrots, squash and a few pink shrimp. I imitated my dad as he grabbed a spoon, scooped up some broth and slurped it. I burned my young tongue with that first spoonful, but the taste of it — sweet and light, with a roasted-chile richness and the refreshing flavor of the sea — made my eyes open wide. There’s a Korean saying that “age is measured in bowls of soup,” given our cultural affinity for the stuff. So, in a way, I guess I grew up a little in that moment of tasting something wholly new. I greedily slurped more soup, and again followed my dad’s lead as he placed a nugget of catfish into a warm tortilla, dipping it into the bowl and painting it with salsa roja before jamming the whole bundle into his mouth. The fish was flaky and soft, and I marveled at the richness of the gelatinous catfish skin and the DIY fun of stripping the meat off the bones.

My parents had moved to Delano at the behest of my grandfather, who left his son just enough money to buy a liquor store on a residential street corner in the middle of nowhere. The previous owner was an acquaintance of my grandpa, who passed away from pancreatic cancer when I was just 2. The move was a stroke of luck, in some ways — my parents were working in South L.A. before they decided to migrate north, which meant they dodged the infamous L.A. Riots by just a few months. They watched L.A. burn from 140 miles away, feeling helpless as they rang uncles, aunts and friends to ensure they hadn’t lost their businesses, or worse, gotten hurt.

Survivor’s guilt is a weird thing, and it’s only in adulthood that I see it in how my parents hustled hard to make their little shop, Amigo’s Market, some measure of success. They turned the parking lot of the liquor store into a kind of miniature trailer park, rented to two gregarious Latino men who also worked part-time at the store and became my de-facto babysitters. I can still hear the random crack of gunshots at night, and the panicked voice of my mom, receiving the synopsis of another robbery attempt against my dad, who seemed to thrive under pressure as long as he had his favorite revolver in his leather shoulder holster.

I learned later that my dad harbored bitter feelings about my grandpa’s early death, at the age of 62, and the fact that he never really got to show my grandpa the kind of financial success he aspired to. “I wanted to prove so much to him, and I didn’t have the chance to,” my dad tells me now, when I ask about Delano and his memories of raising me there. “It was humbling to be there. I was angry at the world, I think. But I had you and your mother. And oh, that catfish soup. Maybe you can make it for me soon.”

Food was his way to inspire admiration and pass on lessons to me — to be brave, to be open-minded, to appreciate life without fear of the uncertain (including jarred oysters, raw fish, mystery innard tacos and strange-smelling stews). I wonder how heartbroken he might have been if I turned out to be a picky eater. But I didn’t — and I think about his smiling encouragement, telling me to eat more and get strong, as I stuffed my face with catfish and soup. I hope that he felt like a success in that moment.

No matter what kind of brothy Mexican soup I eat — caldo de pollo, pozole, menudo or consommé from the drippings of roast lamb — I think of my dad. We butted heads a lot later in life, as I also inherited his temper and stubbornness, and we’re still prone to a verbal sparring match once in a while these days. But I also miss him all the time, too. And a bowl of soup is cheaper than a 2,500-mile flight to Hawaii, where my parents live today.

I’m glad that this soup, recreated from my memory, makes it feel like I’m sitting across from him at that old formica table again, under red tile shingles and the shade of a eucalyptus tree in the middle of nowhere. I dream of sharing a similar moment with a child of my own one day, and I hope it leaves them with a memory that refuses to fade even after nearly 25 years. 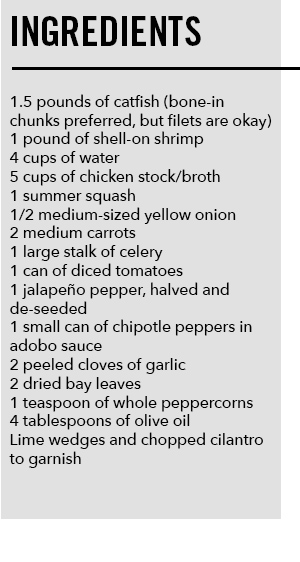 This caldo de pescado originally uses catfish, but you can substitute with another firm, flaky whitefish like snapper, rockfish or cod if it’s fresher at your particular market. Low-quality catfish can have an unappetizing stank, so go to a reputable fishmonger if possible.

The hard work is mostly just gathering and prepping all the ingredients, as the soup comes together pretty quick once you actually begin cooking.

Begin with the vegetables: Peel the carrots and cut them into roughly 1/2-inch chunks. Cut the celery stalk in similar fashion, and quarter the half-onion. Slice the squash into half-inch rounds. Set these ingredients aside. Next, grab a blender and toss in the garlic cloves, jalapeño, onion, canned tomatoes and 2 chipotle peppers from the can, adding some of the adobo “juice.” Puree until smooth, adding a little water if the mix is too thick.

Peel your shrimp, reserving the shells — an easy method is to use kitchen shears and cut along the “back” of the shrimp, which will also let you pick out any of its gray intestinal tract. Heat a large pot over medium heat with the olive oil. When the oil is shimmering, add the shrimp shells and gently sauté until the shells turn orange and fragrant. Then add the blended mixture, stirring to make sure the puree doesn’t burn.

Once the mixture begins to brown and thicken, add the chicken stock and water, plus the peppercorns, bay leaves and salt to taste (start with two heaping tablespoons). Simmer the shrimp shells for about half an hour at medium-low heat, and then strain them out of the broth, using a slotted spoon or mesh strainer.

Add the carrots and celery, and simmer until both vegetables start to get tender (about 15 minutes). Add the fish and squash, and simmer for 10 minutes or until the fish turns white and starts to flake. Add the peeled shrimp at the very end and cook gently for two minutes or until they’re firm and turn pink. Turn off the heat and serve the soup in large bowls alongside warm tortillas, lime wedges and chopped cilantro to garnish.