‘The Binge’ Is the Teen Comedy From Hell

Want a film about adolescent hijinks that rips off the ideas of better films? Think teenagers are basically absolute morons? This incredibly unfunny Hulu movie is for you.

Last summer, Hollywood gifted us with not one but two thoughtful, funny riffs on the Superbad teen-comedy trope. In May 2019, Booksmart gave rising stars Beanie Feldstein and Kaitlyn Dever an opportunity to play off each other as their best-friend characters went in search of a coveted high school party — and along the way, we got to see this familiar buddy-comedy narrative from the perspective of women for once. A couple months later, Good Boys was an utterly adorable look at three tween boys trying very hard to prove that they were cultured men of the world — the fact that they knew nothing about sex, drugs or anything else was endlessly endearing, a reminder that a lot of young guys labor to pretend they’re more mature than they actually are.

Both films demonstrated that a little insight, humor and empathy can go a long way when exploring the very real insecurities of modern young people. We’re no longer living in a world of Porky’s, or even Superbad, so it’s important for filmmakers to keep up with the times.

Apparently Hulu thinks there’s an audience for a teen comedy so mindlessly stupid — so generically “wild and crazy” — that it feels like it could have been made at any point in the past. There is no reason to see The Binge, which is like a cross between The Purge, Superbad and walking despondently into the ocean, realizing that life has no meaning and that every human endeavor is ultimately pointless. Sure, the movie isn’t funny, but it’s not even particularly vulgar or offensively un-P.C. The Binge leaves no impression. It’s what dumb adults think kids are like these days. Young people deserve better.

The first thing to know about The Binge is that it’s set in the future — 2032, to be exact. You see, a few years from now, the U.S. government decides to impose a prohibition on all alcohol and drugs, figuring that society will function better if Americans are only allowed one 24-hour period every year where they can consume such substances. So, if you’re 18 or older, Binge Day is your favorite day of the year. (Why has the drinking age gone down in the future? I dunno, who cares, let’s just keep going.)

The film focuses on three high school seniors: nerdy Griffin (Skyler Gisondo), cocksure Hags (Dexter Darden) and super-weird Andrew (Eduardo Franco). With Binge Day upon them, they’re seeking a golden-ticket-rare invitation for this very exclusive teen party, but that will be difficult to obtain because they’re losers. Adding to Griffin’s woes, he’s madly in love with Lena (Grace Van Dien), who’s just been asked to prom by a secret admirer — oh, and her dad is uptight Principal Carlsen (Vince Vaughn), who doesn’t like the idea of his students smoking that wacky tobacky. Nonetheless, these three young dudes will do whatever it takes to get to that party. After all, it’s their senior year — and this is one of the last times that Griffin and Hags will be together before they head off into their very separate adult lives. (Griffin will be going to Brown. Hags will skip college and enter the job market.)

In other words, The Binge isn’t just about crazy adolescent exploits — it’s got heart, too. Director Jeremy Garelick (The Wedding Ringer) and screenwriter Jordan VanDina (who worked on What Would Diplo Do?) straight-up plunder from Superbad’s playbook, hoping that the combo of raunch and sentiment will be just as successful for them. Unfortunately, as is often the case with streaming services’ original films, The Binge is a photocopy of a popular thing so that Hulu can have a “movie like Superbad” option when you’re browsing around its film offerings. The fact that it’s not at all original is part of the point — it’s Superbad-like or Superbad-adjacent. It’s easier to rip off something successful than trying to do your own thing. 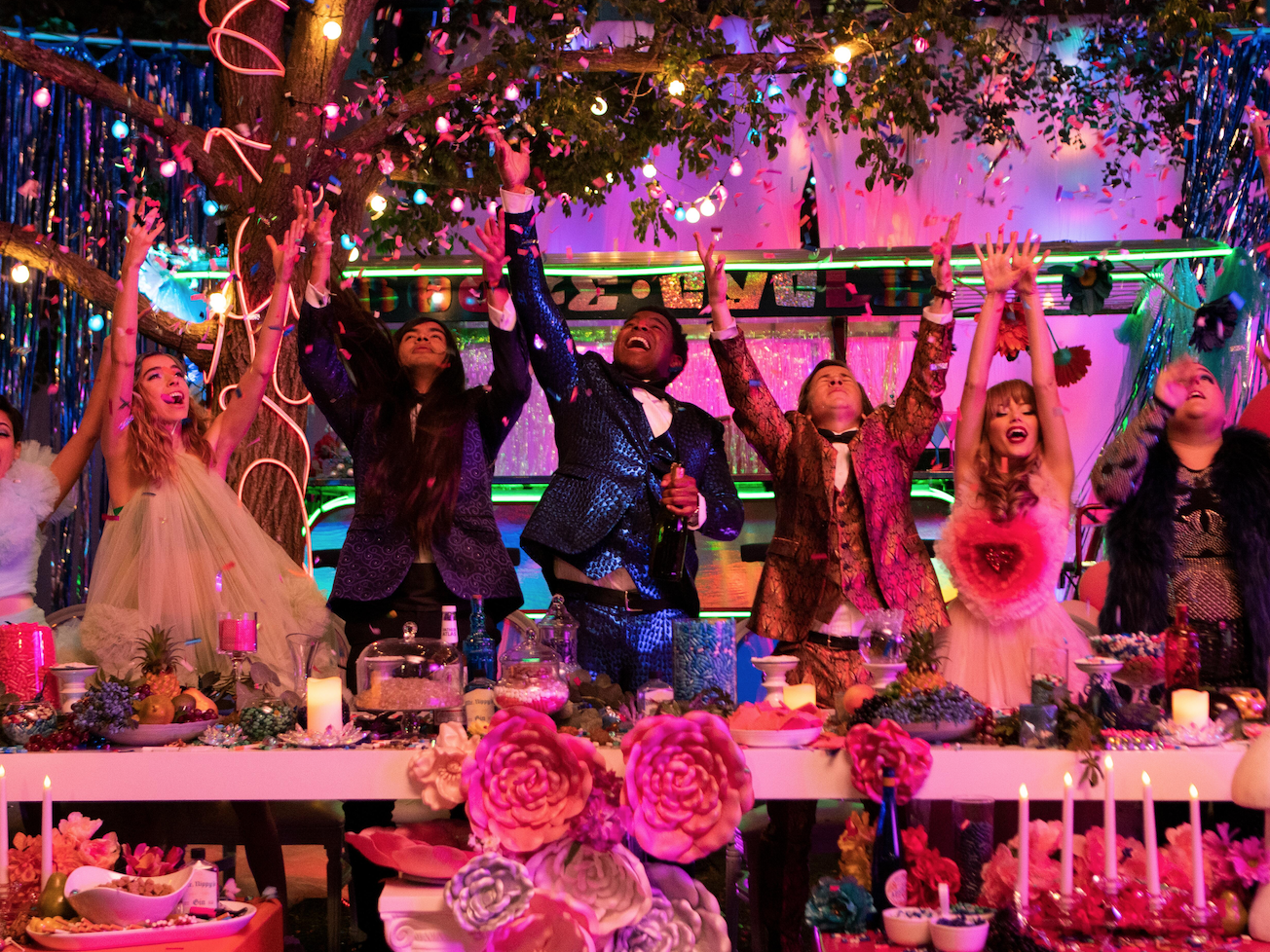 But the stunning lack of creativity isn’t The Binge’s only problem. If the whole concept of your movie is that 18-year-olds, who have grown up not knowing anything about beer bongs or cocaine because this prohibition has been around since they were babies, will finally get to partake in these powerful substances, then we ought to be treated to a lot of gonzo scenes of Griffin and his buddies getting absolutely blasted out of their gourds. But what’s shocking is how little binging actually goes on in The Binge. Other than one utterly uninspired musical sequence that’s the result of them doing drugs, the film isn’t even that fun while watching its characters get high and/or drunk. And all three lead actors are so charmless that, sober or not, they’re total drips, going through the motions of teenage angst in such broad, boring ways that the film never contains a whiff of real life.

Right now, I’d like you to take 30 seconds and think about what you’d do if alcohol and drugs were outlawed except for one day — and how you’d spend that day. Whatever you came up with is, guaranteed, more entertaining than what happens in The Binge.

For a comedy with few big names and little ambition — it doesn’t even have that animating weirdness that makes you wonder if at least the filmmakers were high — The Binge’s great mystery is why Vaughn is in it. With his Ned Flanders mustache and lame-dad energy, Vaughn’s Carlsen is set up as the movie’s stereotypical killjoy, but at least give the actor some credit for being the only remotely lively presence in this tedious affair. Whether the object of affection for a lot of horny, undersexed middle-aged moms or the unintentionally inappropriate dude who keeps accidentally saying cringe-y things — around all her friends, he tells his daughter that he wants her to come with him, har har har — Vaughn is never given top-shelf material, but he’s enough of a pro to maintain his dignity and even elicit a chuckle or two.

That look in his eyes, however, doesn’t fool me: He knows he’s in garbage. While watching The Binge, I wondered who he owed a favor to. I hope that debt’s now been paid in full.

This will be a very challenging new school year for students as they confront remote learning and navigate the usual adolescent anxieties in a way that their parents never experienced. It’s hard to know what kind of long-term repercussions the pandemic will have on young people’s emotional and intellectual development. With all that mind, an utterly feeble teen comedy like The Binge could almost be a balm, transporting viewers back to a simpler, happier time when attending a cool party was at the top of one’s priorities.

But the reason why teen comedies work so well — their ability to plug us right back into those teenage fears, when the world was stretching out in front of us and we were too inexperienced to understand anything — is wholly absent from The Binge. There’s a cynicism to its design, selling young viewers on recycled fantasies of dopey drug exploits and readily available pretty girls who will find you delightful no matter what. Last summer’s teen movies suggested that filmmakers were expanding their minds about what life looks like for modern high schoolers. The Binge couldn’t care less about that — or its target audience or anything else. It’s too busy getting drunk on its own algorithm.