The Best Foods to Eat While Driving, According to the Hard-Drivin’ Experts

Who better to ask than an assortment of truck drivers, blimp pilots, Zamboni operators and mailmen?

You can’t technically keep your hands on 10 and 2 if you’re going to town on some French fries while driving. Then again, drive-thrus and snack-centric gas stations wouldn’t exist if people weren’t so prone to eating while operating a vehicle. Some foods, obviously, are easier to consume under these circumstances than others: It’s not much of a challenge, for example, to occasionally dip your hands into a greasy paper bag and lead a chicken nugget to your mouth while heading down a highway.

But that’s amateur shit! Plus, that fatty nug is just going to make you want to take a nap. And so, driving pros use a bit more discretion when choosing their mid-ride meals: The perfect driving food is usually both nutritious and easy to consume; it provides you with adequate energy without weighing you down; and it’s unlikely to create a big mess.

Or, as some of the professional “vehicle” operators below prove, the best thing to eat while driving is whatever you goddamn feel like.

Mark, 36, from Winter Garden, Florida, operates a truck that transports equipment for the band Chicago, as well as traveling Broadway performances. Truck drivers aren’t allowed to drive for more than 11 hours in a day, and can’t drive for more than eight hours without taking a 30-minute break. While Mark often prefers not to wait this long, he doesn’t want to take his breaks too early, either — planning his meals and drinks, therefore, requires some strategy.

“In the morning, I make two sandwiches,” he says. “I eat one a few hours into my shift, and the other a few hours after that.” He prefers not to eat too many carbs in the morning, because he finds they make him feel tired. For his sandwiches, he often makes peanut butter and jelly on whole wheat bread. He pairs them with fruit, nuts, carrot sticks or jerky. He also enjoys dried seaweed snacks. “I drink a gallon of water a day, but I don’t start drinking it until later in the day,” he says. Otherwise, he’ll have to stop more often to pee, costing him time and money.

Tanner, a Zamboni driver for a YMCA in Connecticut, shared this photo of his mid-drive meal: 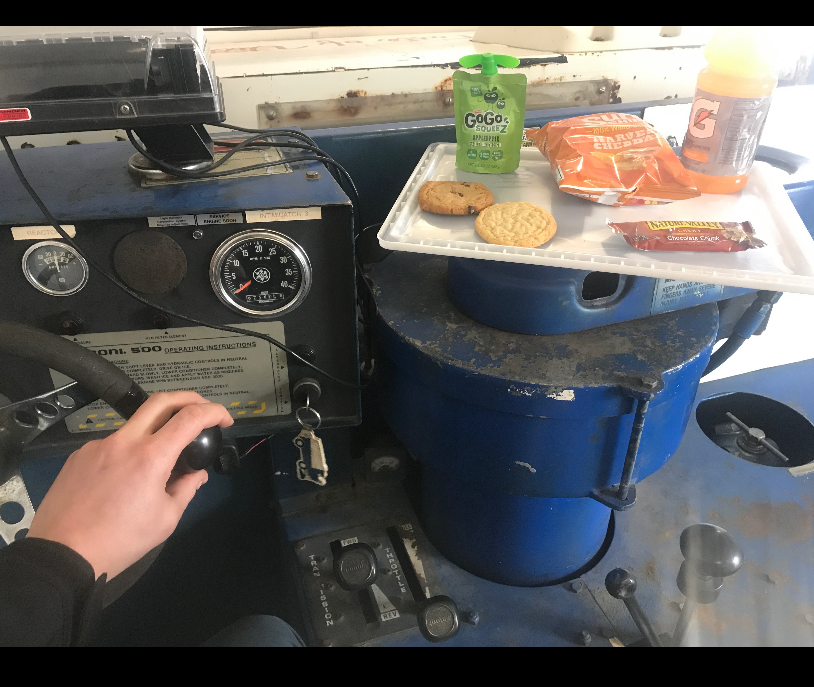 It’s of a squeezable apple-sauce pouch, two cookies, a granola bar, a bag of chips and a Gatorade — all handheld foods. “This is just what we had around,” he says. His favorite food to eat while driving, though, is pizza. “It’s warm when it’s cold,” he says. “Gloves can make it a little tough, though.”

Another Zamboni driver I contacted via Twitter, who goes by the name Coach Yac, tells me his favorite food to eat while smoothing the ice is a cheeseburger. Zamboni drivers know how to live, is what I’m saying here.

I spoke with a FedEx delivery driver in Massachusetts who asked to be kept anonymous, because he’s technically not allowed to eat while operating the truck. Which also means he has to be selective with what he decides to sneak onboard. “Nothing beats a fudge-dipped granola bar while in the truck,” he says. Like Mark, he’s big on PB&J’s as well. “They’re both convenient and don’t really make any serious mess. Like, I love trail mix, but I’m always dropping shit when I try to eat it on the go.”

An equally anonymous United States Postal Service worker — who now does desk work — recalls enjoying Thai food in his delivery days. Recently, too, he was pulled over for driving “erratically” while eating sushi with chopsticks. “I’m a man of culture, I wouldn’t just use my fingers,” he tells me. “The cop said just to pull over if I wanted to eat.”

Bret Viets was a blimp driver for more than a decade. Though he’s since retired from the craft, he often eats the same snacks on road trips today as he would when he flew. “For me, I usually brought a variety with me on every flight consisting of the same things: Peanut butter crackers, either peanuts or cashews and M&M’s, plain or peanut.”

What This Means To You, the Average Driver

Across the board, peanut-butter-related foods seem to be a common pick. Peanut butter won’t go bad sitting in a warm car for a few hours and tends to hold its shape pretty well. But why not just skip the accouterments, and eat it straight out of the jar?  A jar of peanut butter could be launched off a cliff and the peanut butter itself would probably still hold its structural integrity. It won’t keep you warm if you’re on a Zamboni, but despite our pleas to God, most of us will never get to drive a Zamboni anyway. So PB&J, it is.