Trying to get out of that super-spreader event at your in-laws without hurting anyones feelings? There’s an app for that

As an emergency physician, researcher and associate professor at Brown University, it’s fair to say that Elizabeth Goldberg is a busy person. But the one thing that consumed more of her time than anything else during the first few months of quarantine was fielding questions from family and friends about what social activities were safe to engage in. “I was personally receiving questions 20 times a day from various people,” Goldberg tells me.

At first, she found it mildly annoying, but then she thought about everyone who didn’t have a doctor friend or family member to text. “You shouldn’t have to have an emergency doctor friend to figure out the risk you have,” Goldberg says.

Her colleague Megan Ranney, the founding director of the Brown-Lifespan Center for Digital Health, agreed, and so, they decided to create an app together — MyCOVIDRisk, which can help settle arguments with anti-maskers in your family and give you a research-backed excuse to get out of social gatherings with them.

For instance, Goldberg recalls one couple who were debating whether or not to attend an indoor gathering with a loosely enforced mask policy. They settled it with the app, deciding it was too dangerous to go. Meanwhile, when invited to a co-worker’s baby shower, another woman politely declined with a screenshot from the app, showing that it was a high-risk event. “What we’ve heard from people who’ve used it is that it really helped with conflict in their homes,” Goldberg says.

While there are other similar calculators for measuring COVID risk, Goldberg crowdsourced feedback on Twitter and found that many of them require knowledge of math and statistics, not to mention a smartphone. As such, her and Ranney’s goal from the start was to create an app that was highly accessible via a web browser that didn’t need to be downloaded or even require an email address. In fact, it would ask for as little personal information as possible (many other COVID apps require you to enter things like your age and any pre-existing conditions). “I think that’s a turn off for a lot of people who really care about their privacy, and that’s one of the things we considered with this app,” Goldberg says. 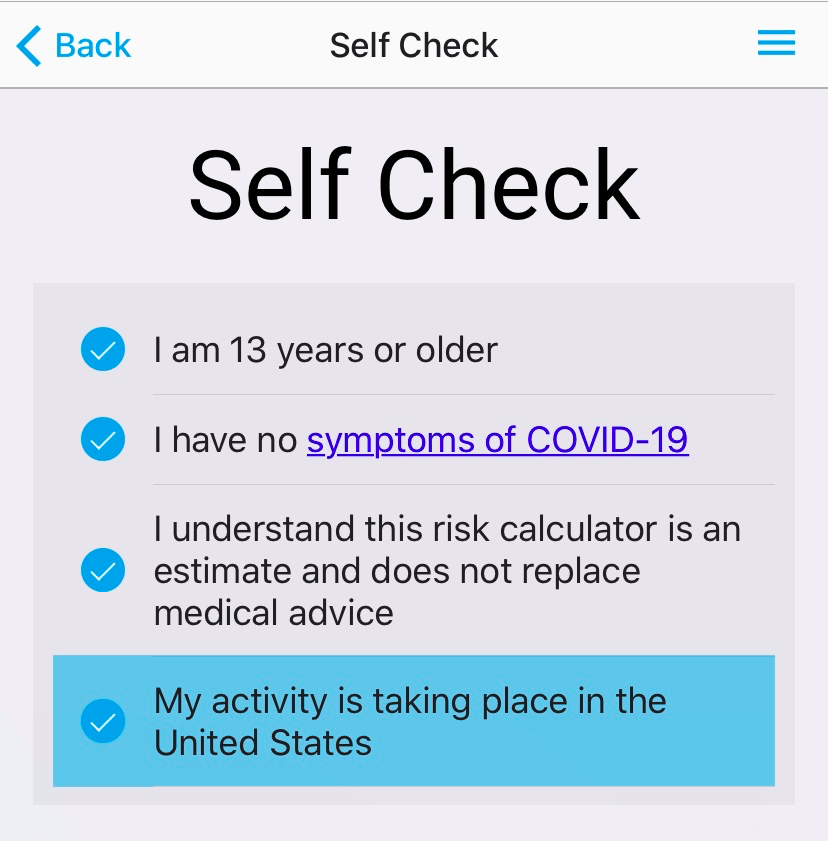 The only real identifying information that needs to be entered is your zip code, which allows the app to pull from local data and calculate risk accurately. Once that’s established, it asks if you’ll be attending an indoor or outdoor activity. Then you can select a few common scenarios — a la getting a haircut, visiting a friend’s house, going grocery shopping or “build your own activity.” 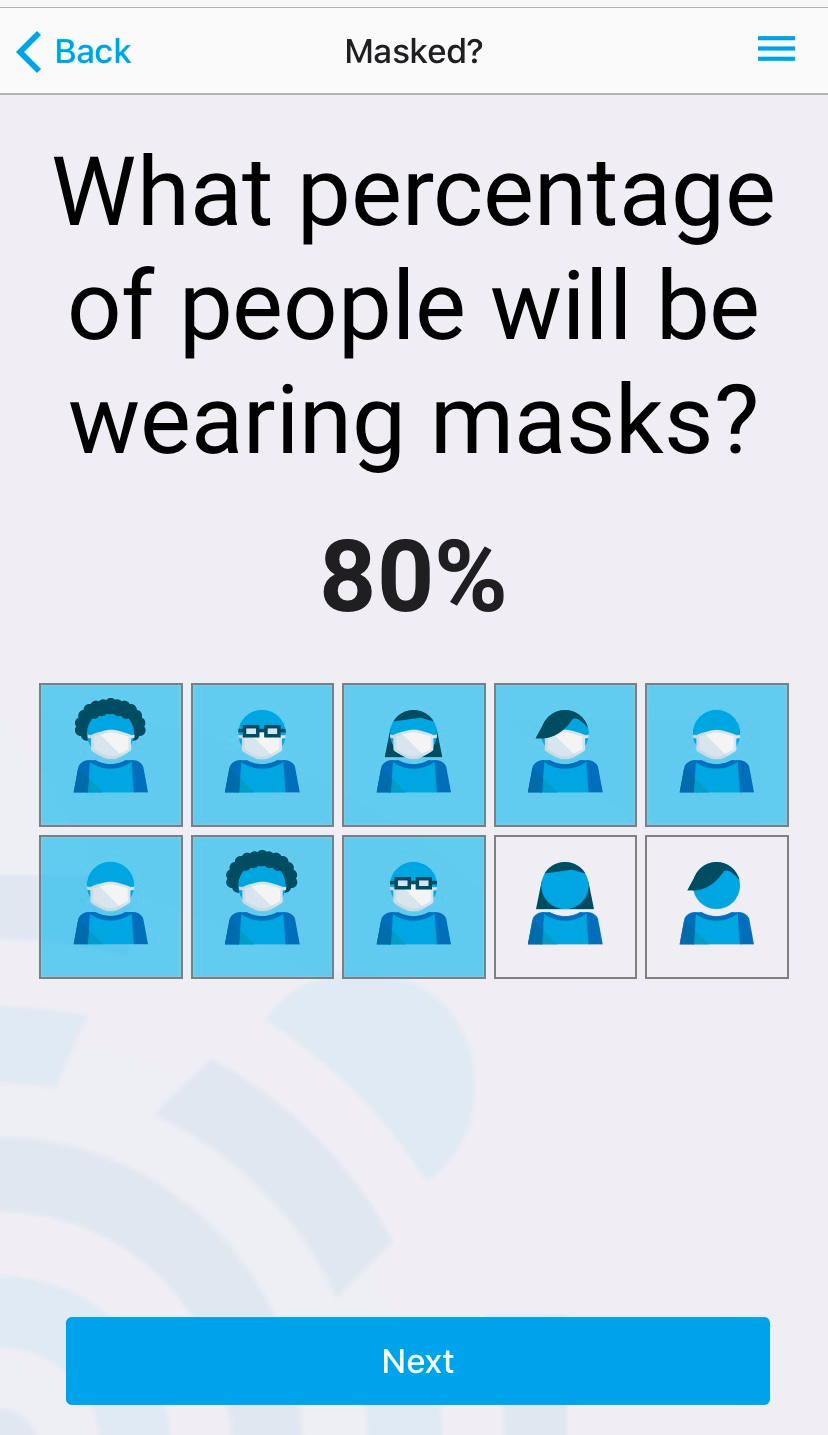 On my first attempt, I clicked visiting a friend’s house, estimating that it would be about a three-hour visit, with around 12 people and an 80-percent mask-usage rate. This indicated a high-risk scenario, coded in dark yellow. Things got even worse as I built my own activity with my family, an option that asked more specific questions about ventilation, activity level, breathing rate and room size. In a Chicago winter with no windows open — and a family that’s prone to both singing and yelling over each other in medium-sized living rooms — this raised the risk to very high, or a code red. 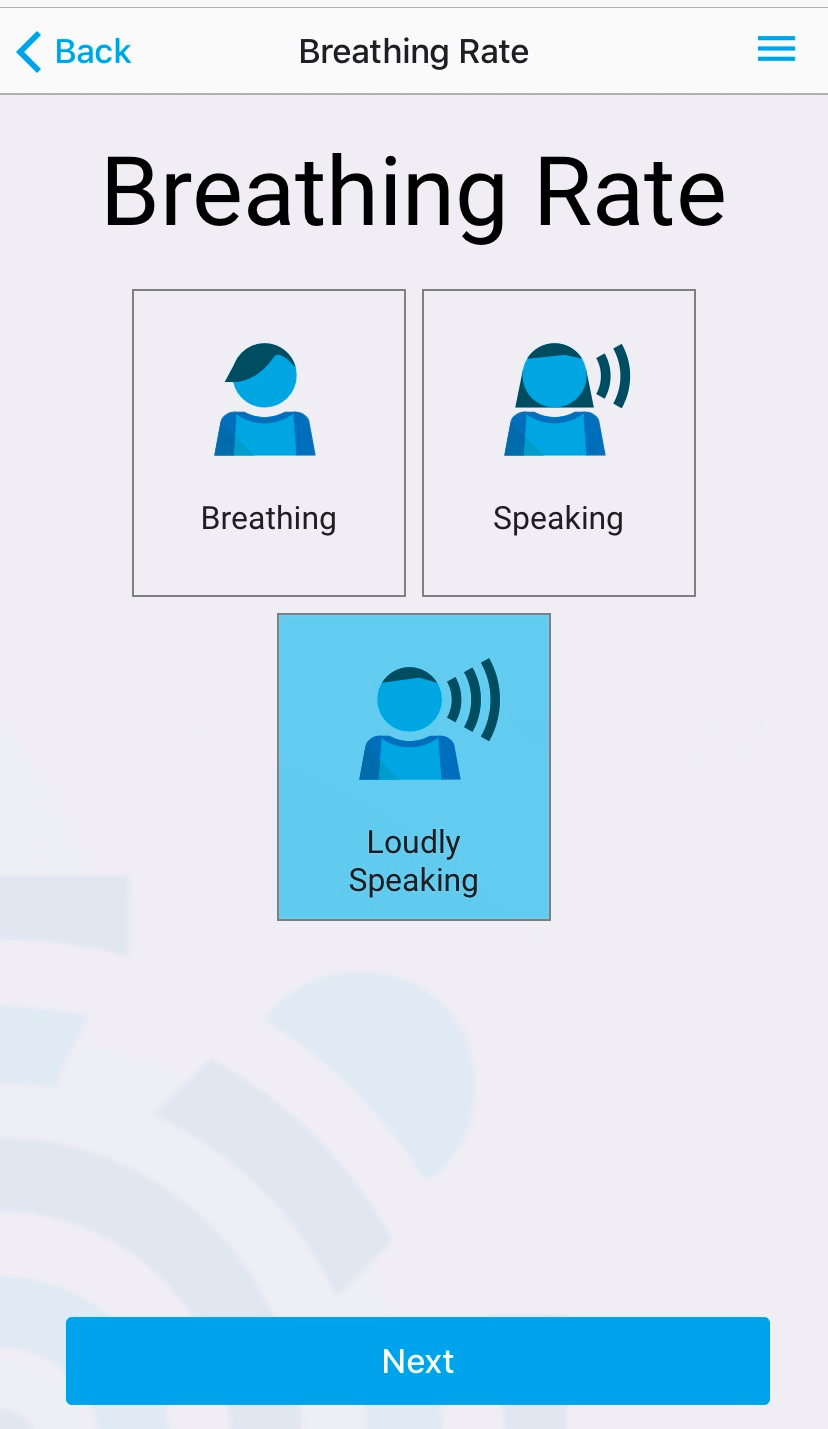 After calculating the risk, the “Learn More & Lower Risk” option takes you through a number of things you can do to reduce your risk, such as decreasing how long you’re there, doubling up on masks, staying at least 6-feet away from others (but ideally 9-feet away) and frequent hand-washing. “We wanted to reduce conflict but also anxiety,” Goldberg says.

Unfortunately, when it comes to very high-risk family gatherings indoors, the app strongly recommends avoiding the scenario altogether, or quarantining for 14 days afterwards at the very least. 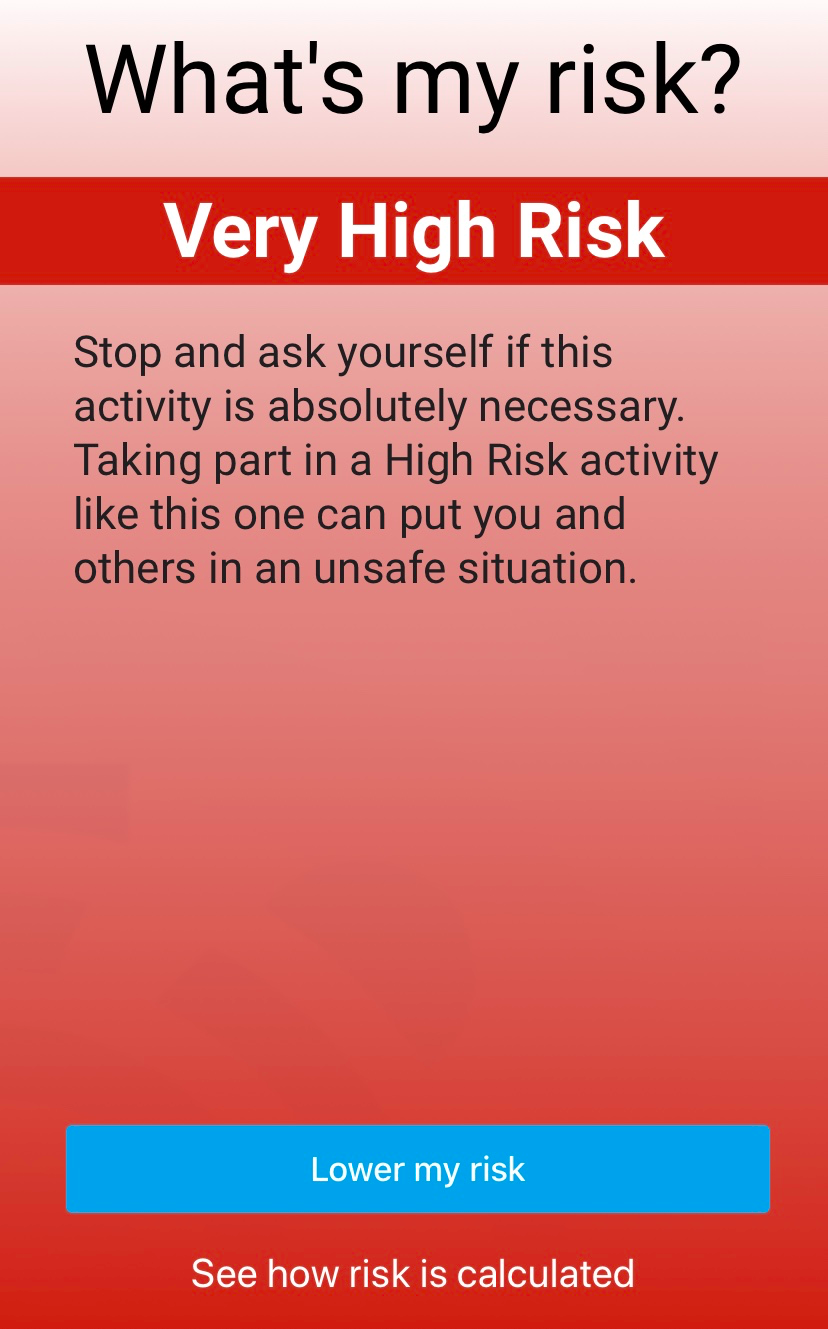 Goldberg is careful to note that the app has limitations as a result of gaps in research and cannot safely predict the dangers of transmission from air travel, going to the doctor or doing essential work. “The science isn’t there yet, and we didn’t think we could give people an accurate assessment of their risk and didn’t want to extrapolate,” she explains. “I expect the app to grow, and as we collect more data and more research is published on the topic, we’ll be more comfortable including a whole range of situations.”

That said, a large part of why the app can predict the risk for social gatherings is because so many people are getting sick that way — i.e., there’s overwhelming evidence that a dinner party with close friends is dangerous. To that end, Goldberg hopes she can help people say to their friends and family, “This in an app created by physician scientists, and the scenario of an indoor holiday celebration we’d be facing looks like it’s high-risk and I don’t want to get you sick.”

It’s certainly a line (and screenshot) I’ll be using a lot this holiday season.