Since we can’t shove popcorn in our own mouths at the theater these days, let’s watch some actors do it instead

I am deeply grateful, relieved and, to be honest, a little bit surprised that I have not yet caught the coronavirus. Believe me, I’m not chancing it — I’m washing my hands a lot and wearing a mask each time I go outside, and not whining about it. (I live in New York City; if you live in Montana or Greenland, okay, great, you win, you can go get your mail mask-free.) I miss a lot about “the way things used to be,” however, and high on the list is going to the goddamn movies.

My first job as a kid was working at a Loews Theater in New Jersey, and my core responsibility for a long time was the engine that still drives the profits: the concession counter. For many long, boring shifts I did nothing but make and sell popcorn.

The first step was the oil. Gross, orange coconut oil in huge gray drums. You’d pry the thing open (one time I cut myself, spraying blood all over the Goobers) and carve out chunks of the solid, slick glop, then plunk it in a tank at the base of the machine. This would eventually heat up and was connected to a big bin up top — that’s where you’d pour the kernels, add the salt and then pull a lever to get the oil squirted in there. Push a button and in a few minutes, voilá: the unmistakable smell of movie theater popcorn.

Unless you’ve got one of these beasts, you just can’t replicate it at home. Still, we try: Air poppers, microwave bags or the classic Jiffy Pop (which is fun, but a huge pain in the ass) always make sitting on the couch to watch something like a slug a little more fun.

Why do we associate movies and popcorn? Mental Floss points out that in the early days it was because popcorn was cheap. Go to a Loews now and you’ll choke when you see the price (don’t worry, they’ll be happy to sell you an equally expensive soda to help with that). Either way, it’s part of the experience, and I miss it. To that end, here are 11 of the best movie moments that celebrate this crunchy, noisy and sometimes-too-salty treat.

Let’s get this list started in a quick and direct fashion. The 1970s cavalcade of lowbrow sketch comedy Kentucky Fried Movie, directed by John Landis and written by future Airplane! creators Zucker-Abrahams-Zucker, has, as its very first gag, a four-second bit of foul-mouthed perfection. A very professional looking news anchor looks directly in the camera to pronounce, “The popcorn you’re eating has been pissed in. Film at 11.” Genuinely groundbreaking for its time.

Wes Craven’s meta-textual masterpiece Scream has one of the all-time great opening sequences. That this film, which sinks its teeth with self-awareness into screenwriting and genre clichés, commences with shots of Drew Barrymore cooking up some Jiffy Pop as if she herself were about to settle in and watch a movie is no coincidence. The telephone prologue (with its dated “900 number” joke) is a perfect time capsule of Gen X know-it-all-ism.

Barry Levinson’s autobiographical film Diner is among the best “hangin’ out” movies, and was instrumental in the development of so many careers: Kevin Bacon, Steve Guttenberg, Daniel Stern, Tim Daly, Paul Reiser and Ellen Barkin are all tremendous in the ensemble film. (One day we’ll do a list about scenes so real they’re painful to watch, and the argument about filing records, in which both are right and both are wrong, will certainly be on there.) One of the more memorable moments happens when Mickey Rourke, on a dare, inserts his “pecker” into the bottom of a popcorn box while taking Colette Blonigan to see A Summer Place. Representation does not equal endorsement! But the movie is still a classic.

Sacre bleu! So Levinson wasn’t first to stick, um, er, place the hole-in-the-popcorn-box idea in a movie. The break-out French coming-of-age comedy La Boum, starring a young Sophie Marceau, buttered the same popcorn two years earlier. Before you click the embedded video and scold me, yes, I am aware just how young the kid actors are. This is double representation does not equal endorsement! Don’t blame me, blame France.

Before Chris Evans was Captain America he was Johnny Storm, aka the Human Torch, in the not-particularly-good-but-ultimately-entertaining Fantastic Four films. (He was also the engineer in Danny Boyle’s outstanding sci-fi flick Sunshine, which you definitely should go watch if you missed it.) Anyway, Evans’ d-bag Human Torch is the primary source of humor in this pre-Marvel Cinematic Universe comic book movie. There’s the bit where he’s skiing and melts the ice, there’s a scene where he’s using his superhero powers zipping around on a motorcycle to win big at the X-Games and there’s a moment where he’s kickin’ back at home, watching TV and popping up popcorn with the heat from his hands. Pretty slick.

Let’s All Go to the Lobby is a wonderful piece of Americana kitsch created by Dave Fleischer in 1957, and the dancing box of popcorn (and other concessions) have been represented in a lot of movies. Nothing, however, topped the demonic #diss they got from the band Mastodon (as The Soda Dog Refreshment Band) in the opening scene of this Adult Swim series adaptation.

Okay, enough movies about movies! Martha Coolidge’s warm and wonderful Real Genius is one of the great 1980s college comedies, filled with rich characters, smart dialogue, memorable music and marvelous costumes. Then in the last third it gets really stupid with a far-fetched government conspiracy plot. It’s redeemed, though, when the good guys (led by Val Kilmer) best the baddies (led by William Atherton) by destroying his house with the world’s largest explosion of popcorn.

Troll 2 is widely considered to be cinema’s best-worst movie. It is, in fact, the subject of a documentary called Best Worst Movie. Among its cornier scenes (I’m sorry, I’m so sorry) is this lusty scene between the seductive goblin queen Creedence Leonore Gielgud and the poor klutz Brent. Points for creative use of a corn cob, but I’m pretty sure that this is not how you make popcorn, no matter how much steam you generate. The above clip ends before the saucy witch’s mark starts drowning in kernels. Not sure why it cuts off. Quite frankly, not sure about anything concerning Troll 2.

F/X was a terrific sleeper film from 1986 starring Bryan Brown as a low-budget special effects whiz who somehow ends up fighting crime with tough guy cop Brian Dennehy. It led to a sequel and a spin-off television series, but it’s that sequel where we get probably the smartest popcorn scene in movies. Our hero is on the run from a bad guy in a supermarket, so, with a quick-thinkin’ MacGyver-esque move, he sets up a flame among some kernels to make a popping sound as a diversion as he races to safety. The gunman will be annoyed when he realizes his quarry isn’t in that aisle, but at least he’ll have something to eat. 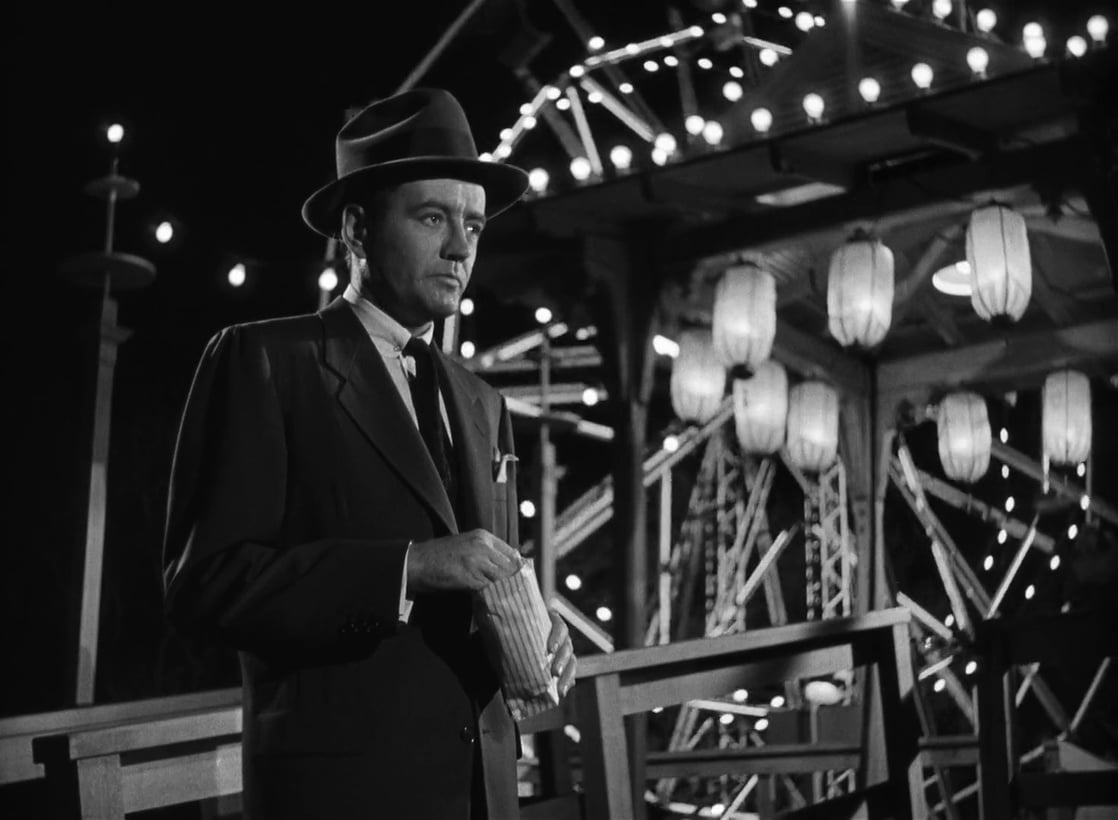 I really wanted to include a movie from before most of us were born, and I was hoping to find some old Western. Surely John Wayne or Gary Cooper sat with an Indian chief and ate popcorn, right? (One of the first things you learn as a little kid is that the Native Americans invented popcorn, or at least you did when I went to school.) Well, I couldn’t find any Westerns, but this is still a good one. In this Alfred Hitchcock classic based on Patricia Highsmith’s novel, Robert Walker chomps popcorn at the amusement park that is the central location of the “hey, I was just kinda shooting the shit, I didn’t really want her dead!” murder that drives the plot. You can even hear a guy call out “get your popcorn” at one point. Perhaps, like in Scream, this was Hitchcock’s devilish way of saying, “Okay, you brutal voyeurs, you want to see some violence, well, here it comes,” to the audience.

The titular gremlins absolutely go nuts watching Snow White and the Seven Dwarfs, flinging popcorn all over the place, making an absolute mess. Believe it or not, I actually saw Gremlins and Indiana Jones and the Temple of Doom as a little kid at a double feature the summer of 1984. Those hyperactive slugs spun-up on movie theater food were basically me and my older sister by the end of that awesome day.

Man, I miss the movies.

Jordan Hoffman is a writer and film critic whose work has appeared in The Guardian, Vanity Fair and the New York Daily News.