11 Guys on the Holiday Chores They Secretly Love

'I get to go to my corner of the kitchen, put football on my iPad, drink beer, and everyone leaves me alone.'

Every Thanksgiving, my family showers me in gratitude for doing the dishes, as if I’m some little hero for volunteering to scrub gravy off plates. Yeah, it’s a low bar to clear for men, who aren’t often expected to clean up after dinner, but I eat up the praise anyway. Little do they know, I freaking love doing the dishes.

Not only do I get to escape dreadful conversation about my life with the people who love me, but I get to use my soft typing hands to actually accomplish something tangible.

Last Thanksgiving, I realized my dad does the same thing, only with making drinks. A true mixologist dedicated to his craft, he’ll sacrifice the pre-dinner chitchat to “take drink orders” and wait for martini glasses to chill in the freezer. What a brilliant guy — he found an even more fun way to avoid talking to people.

So, besides dishes and bartending, I needed to know what else I was missing out on. What other holiday chores are out there that men secretly love?

Entertaining the nieces and nephew. Their mom will be cooking and helping around the kitchen. Their dad will be sitting on his ass watching football. I don’t know how to cook and my parents get mad if I start drinking too early, so that leaves me on child duty. Being a jungle gym for 2-year-old twins and a 5-year-old is exhausting, but I don’t give a shit about football, so it all works out. Plus, I can generally keep them entertained by letting them all brush my hair.

I consider myself a good cook, but I’m the worst cook in my family. So I stick to making the mashed potatoes and stuffing. Mashed potatoes are an extremely underestimated dish: They can be fucked so, so easily. Bad mashed potatoes are still pretty good, but it’s hard to make really good mashed potatoes, and the key to mashed potatoes is condensed milk: It’s like if cream punched you in the face. Also, if you put celery in your stuffing, you are an asshole; no one wants that shit. I know what you’re thinking: What about getting some crunch? Celery does not get you any crunch once it’s cooked, so throw some bacon in there or some other delicious substitute for celery.

I make a baked mac and cheese. My mom insists I make it every year because she’s convinced it’s this awesome recipe that I came up with on my own. And that’s fun for me, because in reality I just took an extremely basic recipe — there are literally like four ingredients — and tripled the amount of cheese that it originally called for. And then my mom will shower me with praise over my cooking prowess even though we’re all just essentially using a knife and fork to eat a block of cheddar cheese.

I am actually engaged in my activity right now! You see, being a physician and dealing with drug dosing and measurements, baking has always interested me, as one needs to be precise when baking something. So, a while back, I started baking challah, the braided loaves of bread that grace the Sabbath table in Jewish homes. From that I have branched out, now making a variation of the bread theme, with a chocolate babka.  Over the next two days, I will be baking several loaves of challah, and at least one babka, for our family Thanksgiving feast.

Attached is a photo of my last babka, and it tasted as good as it looks! And as far as challah goes, I am also attaching a photo of two loaves I baked recently, one with a sugary streusel topping that the grandchildren just about devoured! 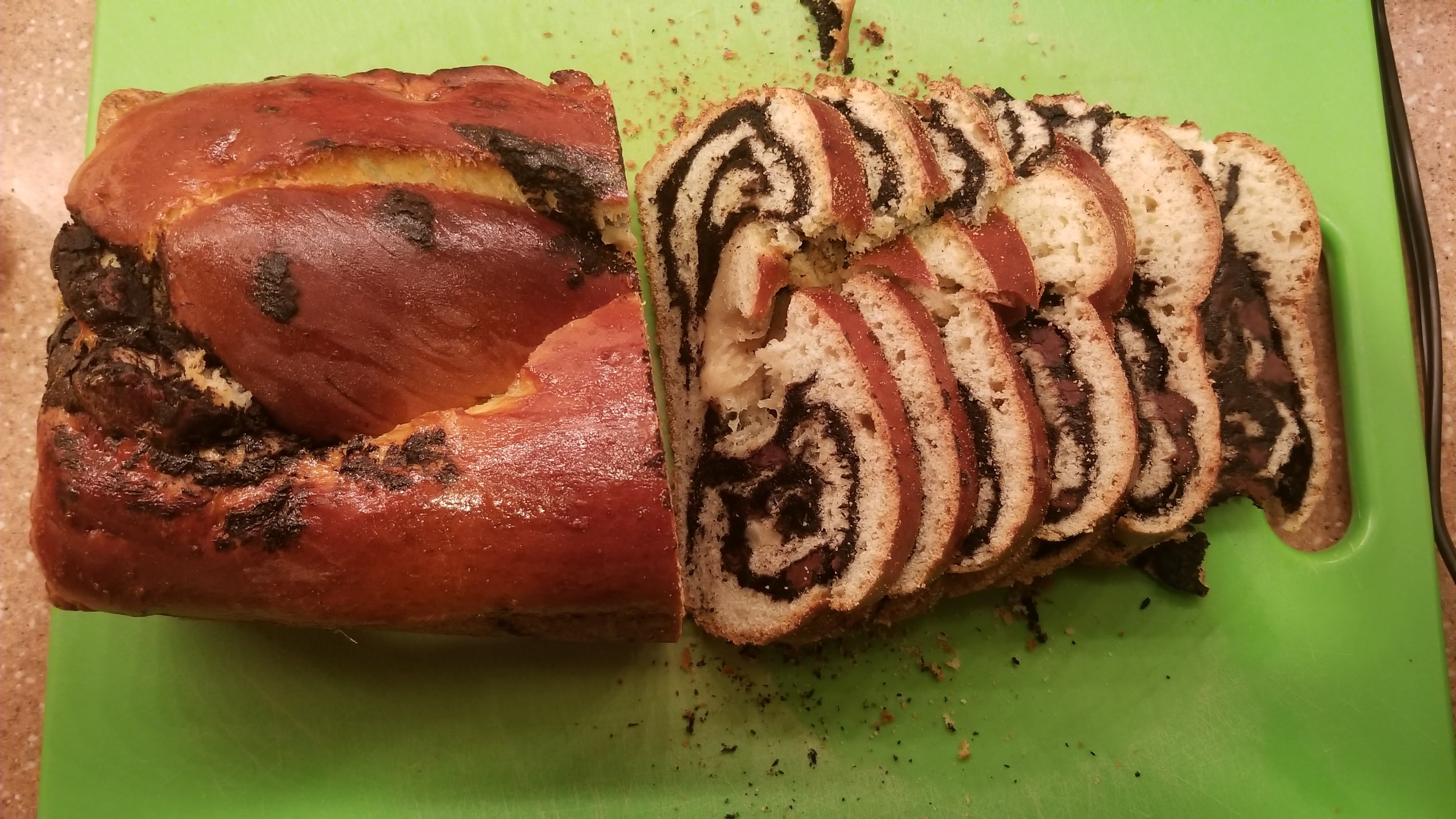 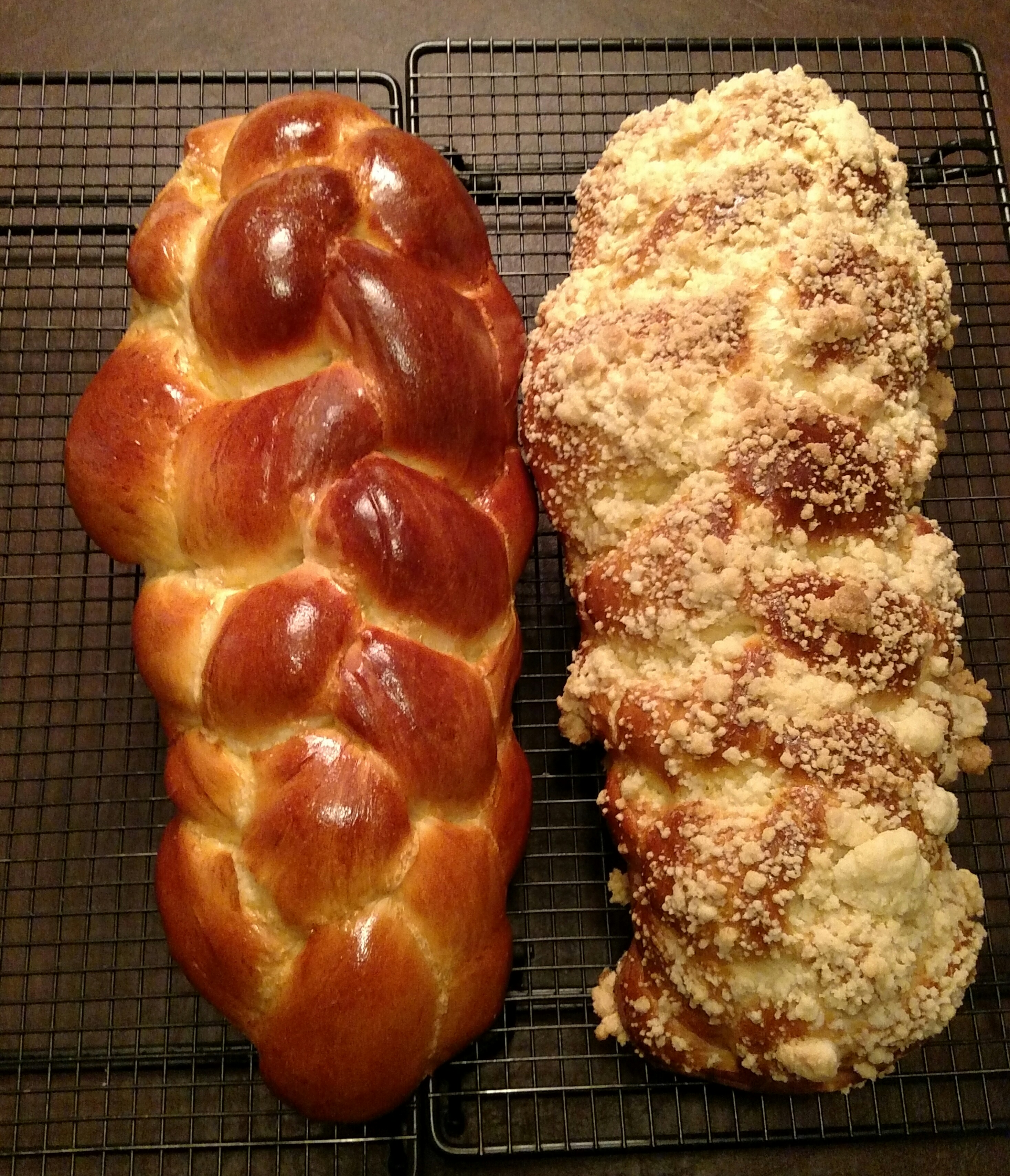 One chore I stick to is cleaning the pots and pans. I don’t know why, but I started doing it years ago with my in-laws. I guess it was because I didn’t really want to sit around and chitchat with everyone, so I got up and started doing the pots and pans, and now I actually enjoy it. You can have a sink full of dirty pans, then in a few minutes they’re clean. Like doing the laundry or cutting the grass, you can see your progress and what you accomplished. My wife will chip in to dry and put up everything, to escape her parents too. Plus, she knows where they all go in the cabinet. Just my way to pitch in.

My Thanksgiving would not be complete without making the gravy with my grandmother and mom. As a kid, turkey as a centerpiece dish didn’t make sense to me. It was dry, pretty much bland, and I couldn’t bring out a bottle of ketchup from the fridge without eliciting withering looks from my family — especially from my mom, my grandmother and my great-grandmother. Then, I discovered gravy: that silky brown sauce bubbling on the stove and later poured into a gravy boat. I generously poured gravy over my turkey slices, over my stuffing, and never looked back. The problem was that every Thanksgiving ended up with me pretty much finishing the entire pot. I was not the favorite son, grandson or great-grandson for the rest of the evening. An obvious solution was to make more gravy. How hard could that be?

So, I decided to learn from the gravy masters. I make it a point to get to my grandmother’s or my mom’s house early to help them make it. I did make it on my own a few years back and something went terribly wrong. Lumpy and tasteless. So, every November, I am their assistant. I bring them flour, wipe up the spills, add more stock and even get to stir the pot — tasting every so often.

I watch as they flawlessly scrape the drippings from the pan, boil the stock and whisk in flour. I am their faithful cleaner-upper and, most importantly, their chief gravy taster. So on each turkey day, I am thankful to spend quality time with these incredible women and to be included in a little Thanksgiving magic!

I love to set the table for Thanksgiving. Well, love is a strong word; maybe it’s more of a strategic move. The trick is that I get the chores out of the way. Setting the table takes a while and is pretty tedious, but it’s pre-dinner, you know? Now I can avoid post-dinner dishes and settle into a food coma to watch football. I’ve been doing this since high school, I think, so it’s definitely become my thing. I’m not a total stickler about it, but I swear to god, if I catch you using your dessert fork for your salad, you’re going to hear about it. And if someone tries to help pour the waters, they’d best make sure there’s a lemon in each cup, too.

With the rest of the chaos that happens on Thanksgiving, it’s nice to have a few hours of drinking and not talking to anyone, which is why I’ve come to love veggie prep. Anything that never had a face and is about to be consumed for Thanksgiving is my jurisdiction and mine only. I have to peel the pounds and pounds of potatoes for mashed potatoes. I have to shuck dozens of ears of corn for corn-on-the-cob. I have to cut and clean the green beans for green-bean casserole. I love it, and I’ve been doing it for years. I get to go to my corner of the kitchen, put football on my iPad, drink beer, and everyone leaves me alone.

I always end up doing two big chores on Thanksgiving: one I hate, and one I secretly love — and for the latter, the love may or may not stem from the fact that I’m typically nice and boozed up by the time I do it. The first is peeling a shit-ton of potatoes. My mom makes the same joke every year that she “had four kids so that she never has to peel another potato.” Don’t mind doing it, but it’s not as good as doing dishes while a little buzzed after dinner. It usually takes a while because I’m trying really hard not to break anything, but I get the thing done and usually someone I don’t get to see very often helps dry, like my cousin or sister.

I love to cook, so I do a lot of it for Thanksgiving. I make both a smoked turkey and an oven-roasted turkey. I especially love to carve the turkey to the guest’s preferences.

I do sweet young peas mixed with pan-sautéed mushrooms in butter, and then mix the butter and mushrooms with the peas. Then I’ll make a cheddar-onion bundt bread with extra-sharp cheddar in the middle, soaking the raw bread-dough balls in butter and Lipton’s onion soup mix. Finally, I make triple-chocolate cheesecake, which is certainly not a traditional Thanksgiving dessert — but no one complains; they just ask for seconds.

I don’t know if I’d consider it a chore, but I offer to get people drinks during the holidays. The benefits here are twofold. One, the house starts getting drunk, which is great because it makes me want to talk more and loosens up the mood a little bit. Two, it makes me feel better about how much I’m drinking. I mean, I’m probably going to be drunk anyways, might as well be drunk with other people, you know?