Ted Lasso’s Positivity Is Inspiring. But He Doesn’t Live in the Real World.

Jason Sudeikis’ Golden Globe-winning performance as a permanently sunny soccer coach is an antidote to all the dark antiheroes we see on television. But the show’s feel-good tone sometimes undersells the discipline it takes to be a positive person.

Who wants to watch shows about happiness?

If this century’s golden age of television has proven anything, it’s that we’re far more fascinated by characters who have demons. There was very little happiness in The Sopranos or Breaking Bad or The Wire or Deadwood or Ozark. Normally, we crave programs where people are terrible to one another — we like to watch the sparks fly — so why is it that, for the last several months, the show I keep hearing about is Ted Lasso, a comedy that features one of the sunniest human beings in recent fiction?

Sure, this Apple TV+ series is miles milder than those searing dramas I mentioned above, but even so, the saga of Ted Lasso — a successful small-town college football coach who’s inexplicably hired to run an English soccer club (even though he knows nothing about soccer) — exists in a universe far removed from the often cynical (or maybe just realistic) protagonists of other shows.

And maybe that’s why people have been gravitating to Ted Lasso. Although it’s only anecdotal, the show is the first Apple TV+ program people have recommended to me (or even knew existed) since that hot mess The Morning Show. (By comparison, the streamer released the terrific documentary Boys State last summer, but I know almost no one who bothered checking it out.) But viewers seem to love this show — and so does the Hollywood Foreign Press Association, which Sunday night awarded star Jason Sudeikis the prize for Best Actor in a comedy or musical, over such heavyweights as Schitt’s Creek’s Eugene Levy. It’s not simply that fans enjoy the fish-out-of-water premise and Sudeikis’ performance: They appreciate the tonic-like quality of the show — which debuted in August, ending its first season in early October — as it chronicles Ted’s unstoppable mission to change the hearts and minds of those around him through the power of his breezy outlook on everything. Ted Lasso speaks to people, who take its optimism to heart at a time when they really need it.

“[I]t takes wisdom and strength to get through a global pandemic that has kept us sheltered in our own homes while family, friends and loved ones have become infected. Or died,” L.A. Times soccer writer Kevin Baxter noted recently about why the show resonates. “And it takes optimism and indefatigability to stay hopeful through a summer of racial tension, an election that split the country in two and a mob attack that disfigured the center of our democracy. … It may not be a show for all times but it’s definitely a show for these times.”

Like many celebrated pieces of entertainment that have come out during the Trump/COVID era, Ted Lasso has been embraced as The Show/Movie/Album We Need Right Now. Ted’s refusal to give into bitterness — even though he’s going through a divorce and the local fan base mercilessly yells “Wanker!” whenever they see him — can be inspirational for all of us who feel overwhelmed by our anger, sadness and confusion. With his Ned Flanders mustache, lively eyes and big grin, Ted could be a rube, but as the show develops over its initial 10-episode run, we start to realize that he’s no idiot — and that the show doesn’t treat him like one. Rather, he’s one of those rare unicorns who has progressed deep into adulthood holding onto a cheerful spirit. For Ted, a stranger is just a friend you haven’t met yet. Winning isn’t as important as doing your best. He believes every cliché, except he doesn’t think of them as clichés: To him, they’re a guide for living. Is Ted actually more of a psychopath than Walter White?

The growing drumbeat of support for Ted Lasso, spiked by its Golden Globe win, prompted me to finally sit down and watch the first season. (It’s already been renewed for two more seasons.) And now that I have, I see why people have been evangelizing. I’ve always liked Sudeikis — his everyman quality on Saturday Night Live was enormously appealing, demonstrating his ability to do a subtler version of buttoned-down lunacy than, say, Will Ferrell — and Ted is an endearing variation on the gleeful normies he used to play on that NBC show. But there’s no anarchic twist to Ted — no dark, weird secret in his backstory (at least not yet) — and so his chipper worldview is fascinating because it just about never cracks. If memory serves, Ted gets mad a total of one time in Season One, and when he does, he apologizes immediately, although the other person is in the wrong. Guys like Ted we distrust — we think they’re insane, hiding something or being disingenuous — so what’s so engaging about Ted Lasso is that he’s none of those things. He may just be that happy.

Sudeikis has acknowledged that Ted was partly modeled after Fred Rogers, which isn’t surprising since both men value kindness above all else. Also, they’re both pretty nerdy, their benign, ingratiating manner not exactly manly. (Fred and Ted are goofy in a way that “real men” find unnerving and unmasculine.) This ought to be a downside to Ted’s demeanor — will the jocks he coaches respect him? — but it’s an indication of Ted Lasso’s worldview (and also one of its drawbacks) that it never becomes much of an issue on the show. Eventually, everyone becomes as emotionally unguarded as he is.

Ted Lasso was created by Sudeikis and (among others) Bill Lawrence, who masterminded Scrubs, another series that argued that, no matter how crusty some people are, we’re all basically decent folks with good hearts. Both shows populate their worlds with very likable characters. (Hannah Waddingham, who plays Rebecca, the no-nonsense owner of the soccer club, is especially terrific as her character starts to soften her opinion of this hokey American.) But the two programs also share an everything-is-going-to-work-out-fine reassuring attitude that doesn’t always serve Ted Lasso well.

It’s great that Ted is Mr. Positive, but Ted Lasso is as well, with even his divorce treated largely in wistful, smile-through-the-tears tones. But what’s potentially engaging about having Ted enter the cutthroat world of English soccer is that his outlook should be severely tested in an environment that demands results. (Yes, Rebecca hired him because she wanted him to fail, but neither he nor his players knows that.) Unfortunately, everything’s a little too neat and tidy on Ted Lasso, with Ted often holding the secret key to motivating uncooperative superstar athletes or outsmarting those who underestimate him. It’s not really a fair fight as we wait for the rest of the world to get on his wavelength.

Obviously, we’re far removed from the gonzo realm of Any Given Sunday, which was intended to be a gritty, realistic look at the hyper-competitive, big-bucks world of professional football, and it’s not like I want Ted to turn into Don Draper, where a smooth exterior hides plenty of inner trauma. But the few times that we see some complexity in Ted, the better Ted Lasso is. In an early episode, Ted makes a throwaway comment that one of the reasons he and his wife are splitting up is that his constant positivity came to be too much for her — an indication that, like rampant negativity, emphatic and unbending optimism can wear on those around you. A violent panic attack triggered by the end of his marriage suggests that Ted isn’t immune to darker emotions — just as a later admission that his dad died when he was a teenager hints at where this resolute sunniness may have first manifested. There are clearly layers to this man; I just wish the show would explore them more. 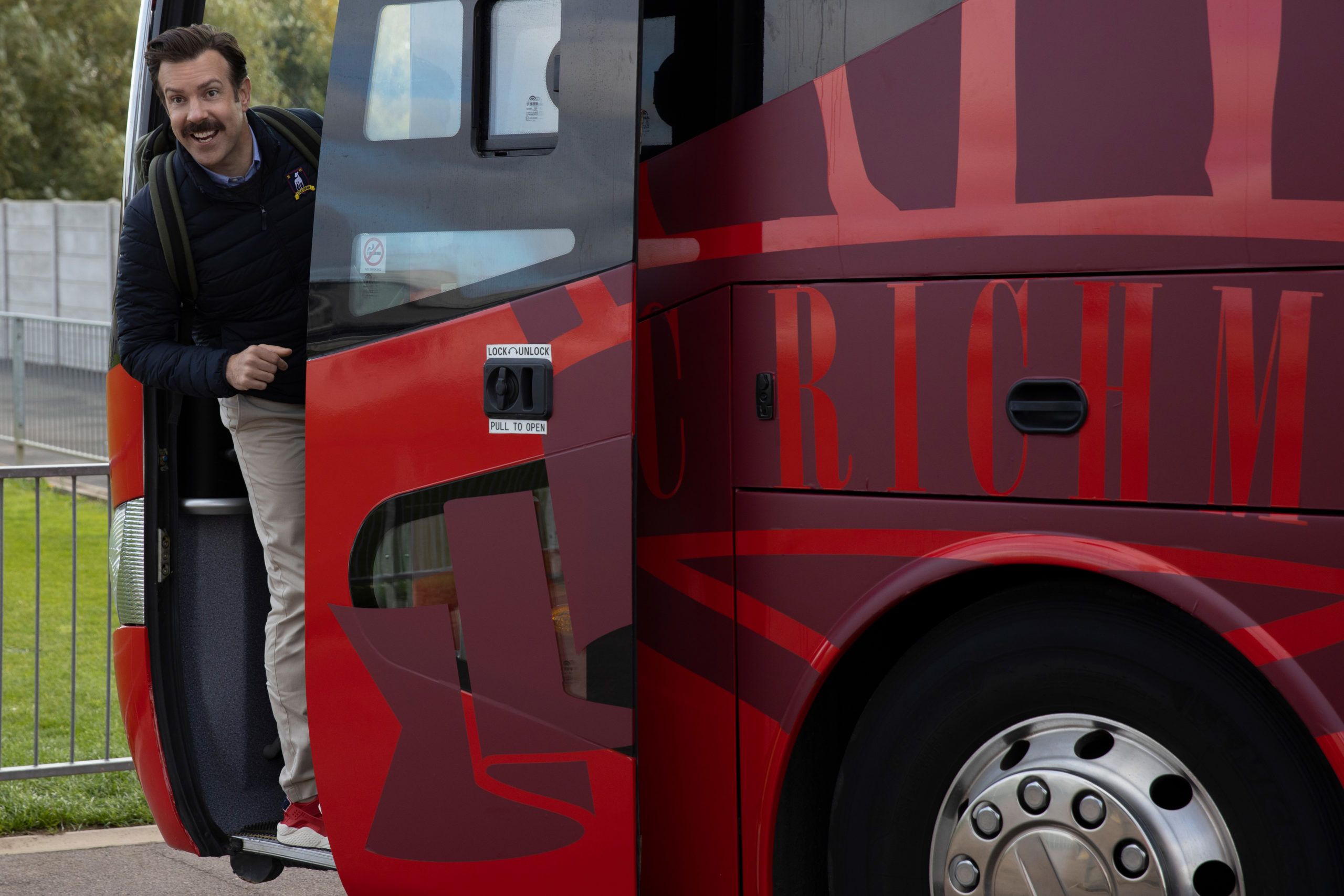 A couple years ago, A Beautiful Day in the Neighborhood craftily cast Tom Hanks as Fred Rogers, with the beloved Oscar-winning star perhaps communicating what it feels like to be a Rogers-esque saint in public — cluing us in on how such outward decency is both a choice and a mask. That nuanced portrait encouraged us to admire the work that Rogers put into being “Mr. Rogers” — which isn’t to say that it was a sham but, rather, that he was trying to emulate to the rest of us what goodness could look like. As touching and charming as Ted Lasso is — as winningly sweet as Sudeikis is in the role — the show almost too easily accepts its main character’s positivity, partly by not putting strong enough obstacles in his path that would profoundly challenge his philosophy. Instead, Ted Lasso assures us that he’s right and that everything will turn out peachy-keen — and if it doesn’t, there will be a heartwarming life lesson attached, so it’s a win-win.

Which easily explains people’s fondness for the show, discovering the series months after it premiered and then telling friends, who then pass it on to others, transformed by the experience. (As The Ringer’s Miles Surrey put it back in December, “I mean this sincerely: The show has struck an optimistic chord in my increasingly cynical heart and made me want to be a better person.”) We need a little bit of hope in the world — I get it.

But as much as I find Ted Lasso’s optimism and decency aspirational, he doesn’t live in the same universe as me or most human beings I know. And, of course, that’s the point: Ted Lasso embodies a fantasy that encourages us to locate our own inner Ted. But when Sudeikis won his Golden Globe Sunday night, his rambling, kindhearted acceptance speech, in which he talked about the example he tries to set for his son, felt very Ted-like — but also made people wonder if he was high. And, hey, maybe he was, but if he wasn’t, it was telling that Twitter couldn’t accept that degree of unvarnished sincerity — they assumed he had to be on something. Ted Lasso is a great place for us to all escape to for a little while. But I’m not sure how warmly the character would be received if he lived in our reality. Until the day he died, some people didn’t buy Fred Rogers, either.