Eleven years ago, Lauren Horobin bought what she thought was a “teacup pig.” It was 2008, she was 22, and these supposedly miniature sows were about to become all the rage. Before Paris Hilton carted around Princess Pigelette, and before teacup pigs were so in vogue that they were even “given out” as party favors during the 2010 Golden Globes, Horobin saw a teacup pig as a replacement for her childhood pug.

“I moved out on my own and wasn’t able to take the dog, and I missed her snorting and snores,” she says. After a quick search online, she came across a boutique breeder in Oregon who advertised “miniature teacup” and “extreme micro” pigs for sale. “I had my pick of the litter,” she says. “They basically send headshots of each piglet, and Bacon was shipped to me in August 2008.”

For the first year, Bacon was as advertised: cute as all get-out, just a smidge over 10 pounds and less than a foot long. Just look at this baby boy: 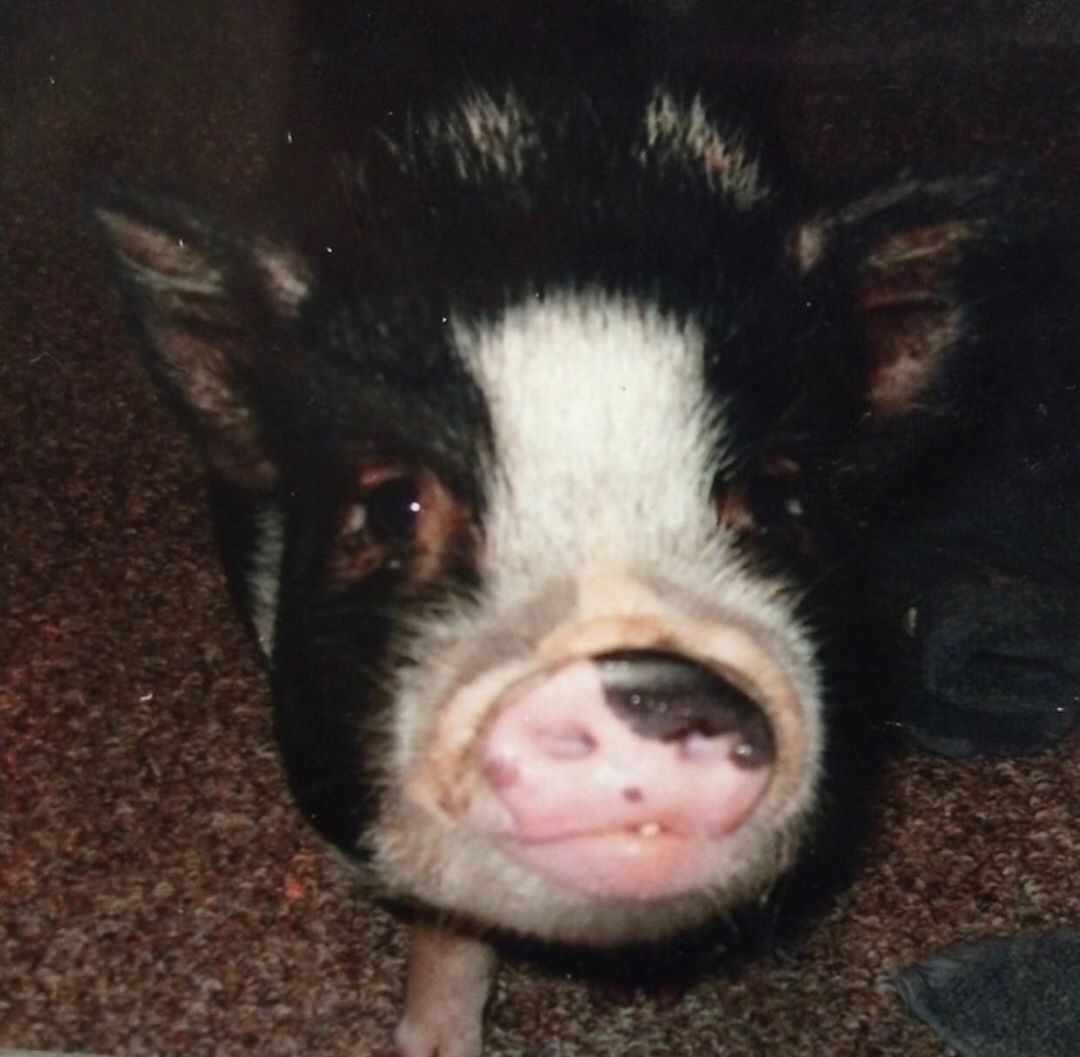 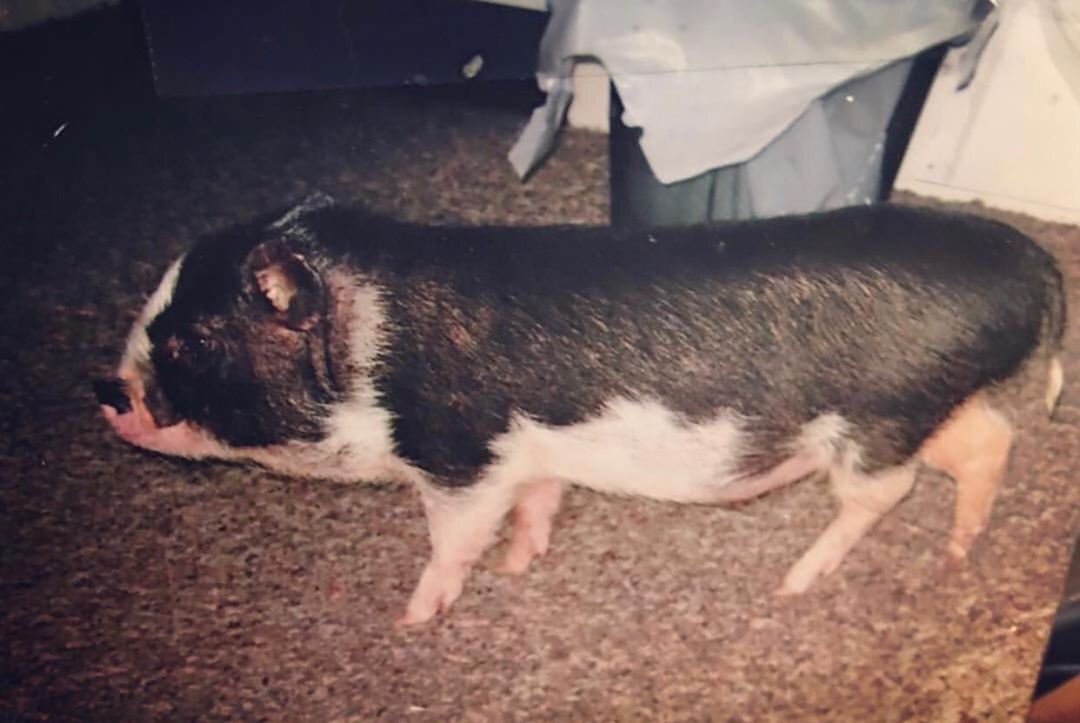 With her li’l Bacon to cuddle up with, Horobin was happy to see teacup pigs become a craze. More people were buying pigs as pets, and she was at the forefront of a trend.

Little did she know about the, uh, elephant in the room: There is no such thing as a teacup pig. “The 30-pound, foot-long ‘teacup’ I was promised grew like an absolute weed for the first year and then steadily continued growing for the following four years,” she tells MEL.

After five years, Bacon was finally done growing. He’s now 160 pounds, over three feet around, four feet long and nearly two feet tall. Bacon is simply “a normal-sized potbelly pig, which is what I have since found out he is,” Horobin says.

She now feels ashamed that she “fell into the minipig myth BS,” and does everything she can to educate people about the hoax. She even rescued an abandoned pet pig, Ahdoboop:

Horobin is not alone. Nicole, a 28-year-old in Massachusetts who requested to go by just her first name in fear of harassment from teacup pig breeders (who she says can be “crazy motherfuckers”), is in the same boat.

“When we got our first pig, my husband was desperate for one but I wasn’t so sure,” she tells MEL. “He did lots of research on how to care for pigs, and took me to backyard breeders (back when we were dumb) ‘just to look.’ Well, you know how that went! Bacon had my heart immediately.”

Unlike most teacup pig breeders, the man who sold Nicole and her husband their pig was “shockingly honest-ish” about how big he might grow. “I can’t stress how rare that is,” she tells MEL, “but this guy wasn’t so much a breeder as just some random guy on Craigslist with cheap pigs in a backyard shack. … Look up ‘teacup pig breeder’ on Facebook to see the more typical experience: piglets only, no mom in sight, posed on fluffy pink pillows.”

Despite his honesty, Bacon’s breeder still suggested Nicole feed him rabbit food “to keep him small.” But Bacon’s new owners didn’t buy it. “We feed him pig food because he is a pig.”

Now, Nicole’s Bacon is just 3 years old and around 90 pounds. “[He] could still double in size, or more!” Nicole says.

Unfortunately, people like Nicole and Horobin who keep their teacup pigs after they’ve grown full size are in the extreme minority. So many people were sold a “teacup pig” with the promise that it would stay the size of a small dog — only to end up with a giant hog on their hands — that teacup pig abandonment is an outright epidemic.

“Ninety percent of pigs are ‘re-homed,’ or given up to overflowing sanctuaries, by their first birthdays,” Horobin says. And that’s if they’re not outright left to die:

It’s for this reason that a small but tight-knit community of “Pig Parents” like Horobin and Nicole actually take more pigs into their homes — and work hard to dispel the teacup pig myth. The group works with pig sanctuaries on social media using hashtags like #minipigmyth and often advertise websites like Mini Pig Info and Pet Pig Education, hoping to educate people who what to make pigs their pets.

For what it’s worth, Paris Hilton, perhaps the Typhoid Mary of the teacup pig outbreak, didn’t abandon her giant hog. She proudly flaunts it:

After a year with Bacon, Nicole and her husband were acutely aware of the abandoned-pig problem and decided to adopt another. “I kept an eye out for Craigslist posts of people needing to rehome their now-massive ‘teacup pigs,’” she tells MEL.

It didn’t take long. A woman “who was a great dog mom but wasn’t exactly ready for pig parenting” posted about rehoming her giant pig, Mochi. “Her poor baby had barely ever gone outside, had never been to the vet, and had hooves so long that they curled under her feet and were cutting her with every step,” Nicole says.

‘Breeders Can Be Crazy Motherfuckers’

Nicole stresses that she doesn’t blame the woman who gave up Mochi: “She was lied to.”

Breeders, which are known in the pig community as “greeders,” Nicole says, “lie to unsuspecting buyers, telling them that their pigs are ‘special’ small pigs, selectively bred to be somehow worth $2,000 or more.”

But such pigs don’t exist. Yes, there are breeds of pigs — often referred to as “minipigs” — like potbelly, choctaw, and juliana, which stay relatively small. But “small” for pigs “technically means anything under 400 pounds,” Nicole says. Sometimes, “breeders just sell full-blown farm hogs!”

Breeders employ a number of tactics to fool people into thinking their “special” breed of pigs will stay small. “These pigs are often starved and sometimes die days after adoption,” Nicole says.

Sometimes they are fed well, but breeders will be selective about the information they disclose. “They’ll take advantage that people familiar with dogs will see a small, month-old pig and think that means the pig won’t grow much more, not knowing that they grow for five years,” Nicole explains. “Other times, greeders will say that a few-days-old pig is a year old.”

Ultimately, for those considering becoming a pig parent, Nicole simply recommends you do your research. “The American Minipig Association is a great place to start,” she says. For more down-and-dirty insight into pig parenthood, check out the “Pig Shaming” Facebook group.

“It’ll show you the hilariously honest highs and lows of pig parenting,” she says, “from getting nightly snuggles from a 200-pound pig — quite literally hogging the bed — to having your sweet baby ejaculate for 10 solid minutes on your motorcycle.”

But most importantly, Horobin says, adopt, don’t shop. “There are just so many great pigs looking for loving homes. Check out Pig Placement Network, [which] can assist with finding a perfect baby for you.”

Getting Bacon “was the greatest thing to ever happen to me,” Horobin says. One day, she hopes to purchase more land and rescue as many hogs as she can. “I will forever be the crazy pig lady screaming from the rooftops that minipigs don’t exist.”

Sure, most people may be intimidated by a giant hog, but Horobin says the love they give, their intelligence and emotion, makes it all worth it. Bacon isn’t even that big, she says. “He’s just a short stubby boy.”