How Taz from Looney Tunes Became the Ultimate ‘90s Tattoo

Before there were memes, there was Taz, the chaotic Tasmanian devil, and people really wanted him permanently emblazoned on their bodies

If you were to assemble and examine a random sample of people in the 1990s, you’d find several commonalities in their appearances. There’d be a myriad of frosted tips. You’d see quite a few chunky skate shoes. And if you looked closely enough, there’s a good chance that at least some would have a Taz the Tasmanian Devil tattoo.

Taz appeared in just five Looney Tunes and Merrie Melodies shorts before Warner Bros. shut down production in 1964. Despite this, his mannerisms are well-known: He’s notoriously short-tempered, could eat a horse (or nine) and speaks in a sequence of grunts, growls and screeches.

For some odd reason, that qualified him for a permanent space on the bodies of many individuals who lived in pre-iPod America. To find out why, I sat down with Benjamin Frisch, one of the world’s leading sources of Taz tattoo knowledge and producer of the Decoder Ring podcast, where he discusses the topic in an episode appropriately named “Tattoo Flash.”

In order to truly understand Taz’s appeal as a tattoo, we need to begin by investigating his path to stardom. After 1964, he appeared in a couple movies — Bugs Bunny’s Looney Christmas Tales in 1979 and Daffy Duck’s Movie: Fantastic Island in 1983. But it wasn’t until 1987, when Warner Bros. began releasing new shorts (and re-airing old ones more frequently) to introduce Looney Tunes to a wider audience, that Taz became a real fan favorite. “It made people think that Taz was much more of a main character in the pantheon than he was,” Frisch explains.

Taz had a few major moments on the big screen not long after that, including his own show, Taz-Mania, which ran for four seasons in the early 1990s and shows him sharing a home with his family, including a pet turtle aptly named “Dog.” Shortly thereafter, he appeared in both Animaniacs and Space Jam, a sizable box office success that propelled the Looney Tunes allure even further.

This was also when Warner Bros. decided to open a chain of retail stores selling Looney Tunes merchandise, among other things relevant to their productions. For some reason, Frisch says Taz T-shirts, mugs and other goodies related to the Tasmanian Devil started flying off the shelves. “Clearly, this character was connecting with people,” he says.

Why that was remains unclear. For one, Frisch says people who live on the “edge,” like bikers and soldiers, may identify with an impulsive character like Taz, “who leaves pure destruction in his wake.” (These were also the same crowds who were often seen frequenting tattoo parlors around that time — they still do, despite tattoos being much more mainstream nowadays.)

Economically (as well as just generally), the world also began feeling more competitive in the 1990s — we were going through a time of unprecedented growth — and Frisch hypothesizes that some audiences perceived Taz as a competitor, a whirling cyclone that can’t be stopped. That, combined with him appearing alongside basketball superstar Michael Jordan in Space Jam, contributed to sports fans and players falling for Taz, too. (Just last month, the Phoenix Sun’s Cam Payne got a tattoo of Taz on his thigh.)

Now, let’s rewind again. Because tattooing was largely underground for so long — tattooing was illegal in NYC up until 1997 and frowned upon in many other states — its history is mostly undocumented, so it’s not easy to track Taz’s inception as a tattoo. Frisch sent me a few examples of bygone Taz tattoo flash — images that were (and still are) displayed on the walls of tattoo parlors for customers to choose from. He also shared an old-looking tattoo stencil that features a funky-looking rendition of Taz. But they’re tough to date. 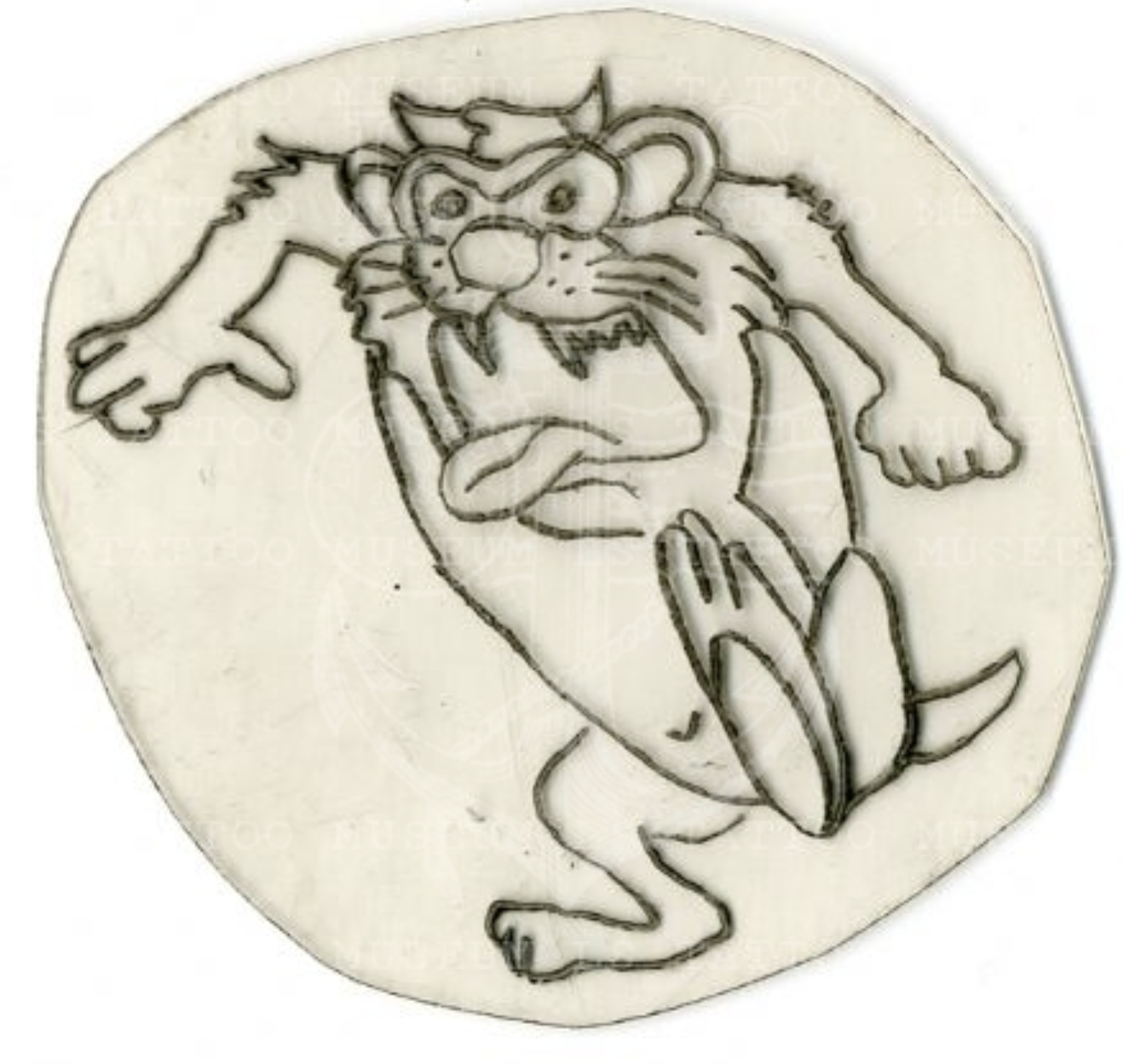 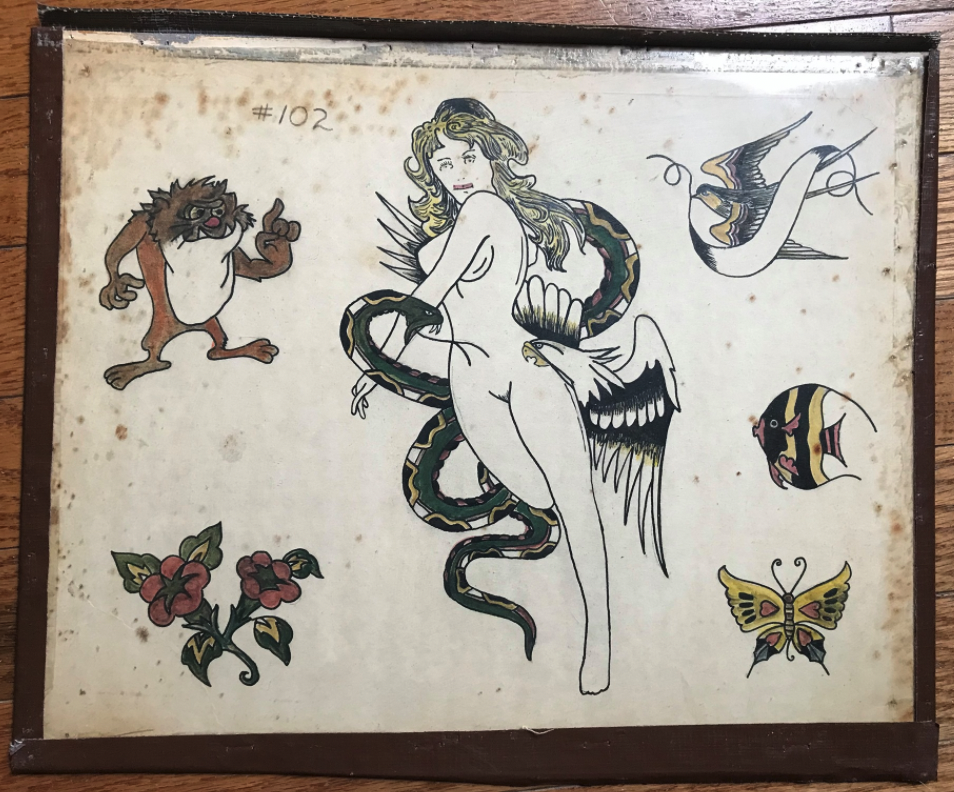 However, Danny G, tattooer and author of High as a Kite, a collection of contemporary and vintage tattoo flash, sent me an image of a sheet he owns that displays Taz in one corner, and it’s clearly dated from 1976. (Frisch found the same sheet online, but it hadn’t been colored in.) 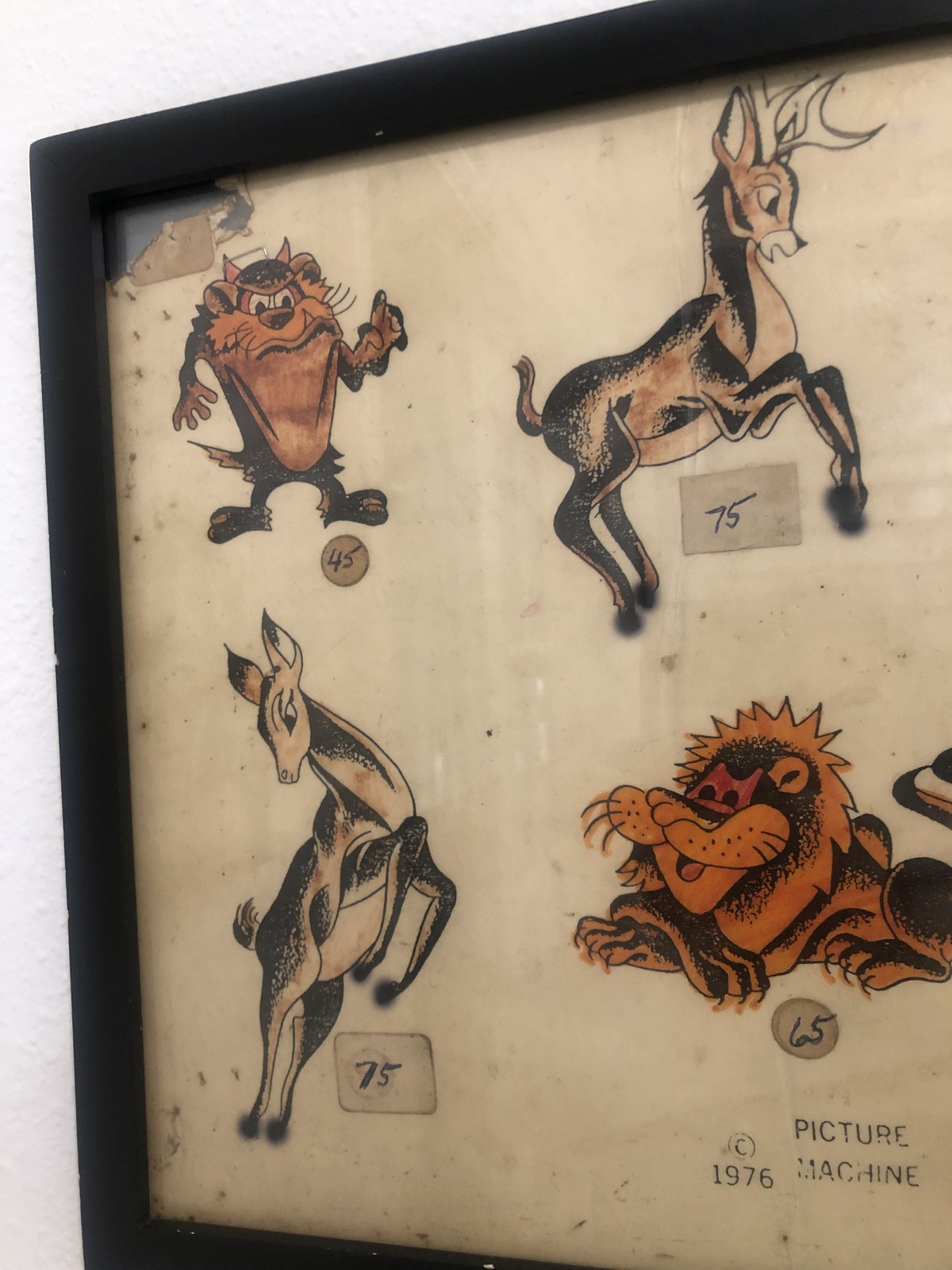 This is to say that Taz was likely being tattooed well before the 1990s, and that’s not surprising, actually. “Cartoon characters were always super present in the history of tattooing,” Frisch says. Woody Woodpecker, Betty Boop, the Pink Panther, Tweety, Casper, Mickey Mouse, Popeye and Yosemite Sam were (and still are) prominent images in the tattoo world.

Nicholas York, tattooer and author of Tattooing to Perfection, tells me that the popularity of cartoon characters as tattoos is fairly simple to understand. Before memes, characters like Taz acted as personifications of certain shared feelings and qualities, like wildness. And, much like memes, tattoos could be retrofitted based on the customer’s needs — here’s a boxer Taz, a drunk Taz and a firefighter Taz. As York says, “There’s a Mickey for every fucking holiday.” 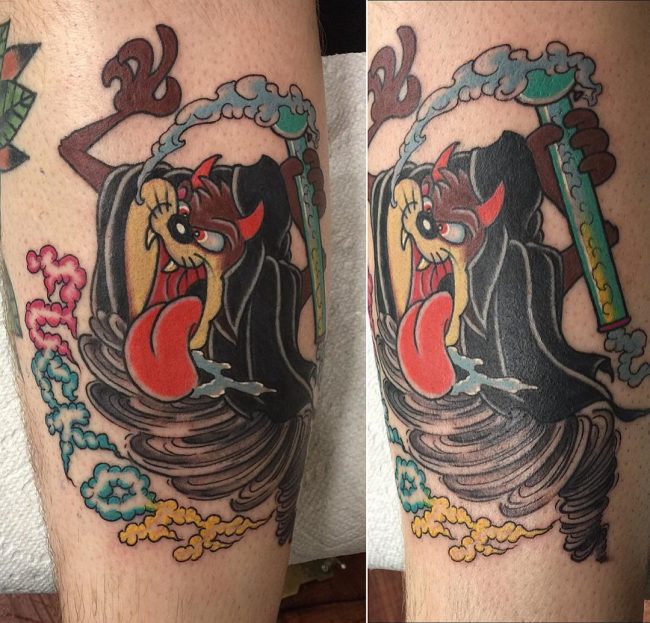 He also adds that cartoon characters are “a safe choice.” Taz isn’t a naked pinup doll that will make your mom even angrier when she sees your new ink; he’s a beloved character that everyone knows.

This made Taz (and other cartoon characters) an easy choice for people who walked into tattoo parlors not knowing what they wanted, so tattooers kept drawing them and posting them as flash on their walls. “They’re not going to waste their time drawing something that doesn’t sell,” York says.

It’s also relevant to suggest that someone who steps into a tattoo shop and makes an impromptu decision is Taz-like in their own right. “Taz is a purely spontaneous creature,” says Frisch. “If you’re spontaneously getting a tattoo, you’re already spiritually connected to Taz.” On Reddit, a 56-year-old with a Taz tattoo on his back says, “I got it when I was 18, and my thought was [that] it represented a wild, fun and unpredictable character.”

It’s this combination of the tattoo world’s love for cartoon characters and the Taz mania of the 1990s that resulted in the tanned, faded Tasmanian Devil tattoos peppered among our aunts, uncles, moms and dads. I guess that means they were real badasses back then, huh?