How can a single stick, basic as it is, contain so much meaning?

People like to say that America has never been more divided than it is right now, and though we haven’t suited up for Civil War 2.0 just yet, I can certainly see where they’re coming from. It’s hard to exist in 2019 (let alone on the internet) and not see an us-vs.-them mentality infecting every corner of culture. It’s not just in the United States, either — these schisms have global implications. And even an object as theoretically unassuming and useful as the plastic divider at the supermarket checkout is, well, divisive.

To begin, let’s get my own biases out of the way: The checkout divider appeals to me on the object level. Whether rectilinear or triangular, it’s a solid though lightweight bar that’s well-adapted to your grip. Moreover, its value is a wonderfully tangible function of its presence — the divider doesn’t have to do anything to serve a purpose, it just needs to be. There is much to recommend a tool with such an axiomatic and self-contained identity.

Then, too, I like pondering the circumstances of its invention: Where did this thing come from? It’s a surprisingly difficult question to answer. The patents you find on Google pertain to little tweaks and updates on the original design, which, again, is minimal: A bar of wood can and does get the job done. I can only guess that the divider followed soon after grocery stores adopted conveyor-belt systems, beginning with some overeager attempts at futuristic convenience in the late 1930s. For all I know, it was a fed-up cashier who whittled the first of these rods, thereby changing history.

Anyway, fast-forward to our messy, petty, late-capitalist dystopia. Automation and self-checkout may render the divider obsolete in time, but for now they remain a part of shopping, as well as a curious reminder of human pragmatism that now feels very distant.

And boy oh boy, do people have opinions on it.

Being a quotidian detail that one often takes for granted, and almost never a topic of discussion, the bar is something of a key to our internal state. Our relationship to it is personal and implicit, built wholly on unspoken etiquette we learn only from context. When we do start talking about the divider, its segregational property is top of mind. A long-running meme has it that white people are especially devoted to the checkout barrier as a matter of uptight bearing. The idiom “stick up their ass” would seem to correlate with deployment of this stick.

I’ll happily concede the stiffness of my fellow whites and the humor in this harmless stereotype. If the accusation rings true, however, I’d chalk that up not to white people’s use of the divider, but the aggression they vent in this moment. A Twitter acquaintance who lives in the Deep South, @pinkpushpop, explains it to me this way in a DM: “You know how some white women will clutch their purse when they see a black man? Some white people will recoil at you and slam that thing down before you decide to even be in that line. It means, Don’t talk to me or touch my shit (like that was the end goal anyway).”

Her observation comes in response to a tweet in which I called for a discussion of the politics and preferences around the divider. As she suggests, we are far more aware of what the divider can say to other shoppers, or about oneself, than we tend to let on. To my amazement, the post garnered spirited debate and hundreds of additional replies.

The first essential point to make here: Cashiers are strongly pro-stick, and if you want to be a friend to the lovely person scanning your milk and eggs, you’ll respect the advantage it gives them.

This makes complete sense if you reflect on it for two seconds — the register job is both highly repetitive and speed-oriented — but the fact is lost in the noise of customer-to-customer drama. That is, we see the divider as a way of separating our items from those of the next person in line, yet we forget who that separation is for. It’s not us! To the shopper, it’s obvious that this banana is ours, while that yogurt is theirs; to the cashier, it’s all just stuff, and those boundaries should be made as clear as possible to facilitate the process so that the line keeps moving.

This is of a piece with overall attentiveness or lack thereof in a retail setting. Gotta be glued to your phone while they’re ringing you up? Then the divider can save everyone some trouble. Seriously, you are driving the poor clerks crazy by neglecting your duties.

Seen this way, the divider shouldn’t be an issue: Once you’ve loaded your groceries onto the belt, you place it behind them, in preparation for the following customer, or even when no one else is waiting. The problems start because our inability to standardize this behavior means it’s unclear who’s responsible for that placement. Sometimes the cashier will do it, and sometimes, in the event it slips your mind, the shopper behind you will have to awkwardly reach to the rail to grab the stick themselves and drop it in front of their purchases.

Confusion appears to be worst in the U.S., while regions with a stronger sense of formality in this ritual — the Netherlands, Canada, the U.K., Denmark and Germany were mentioned, perhaps supporting the notion of the divider’s fundamental whiteness — don’t struggle as much with the basics. In these countries, I’m told, you may be tut-tutted for failure to comply with expected norms. Germans worship the divider to the extent that they have multiple words for it, including “Kassentoblerone” (for the ones that are Toblerone-shaped) and “Warentrennstab,” which translates literally as “the stick separating the wares.” I also found an amusing German comic of people lined up to buy the rods in a store that sells nothing else. Oh, and allegedly a dude in Dresden brings his own dividers when he’s out shopping. 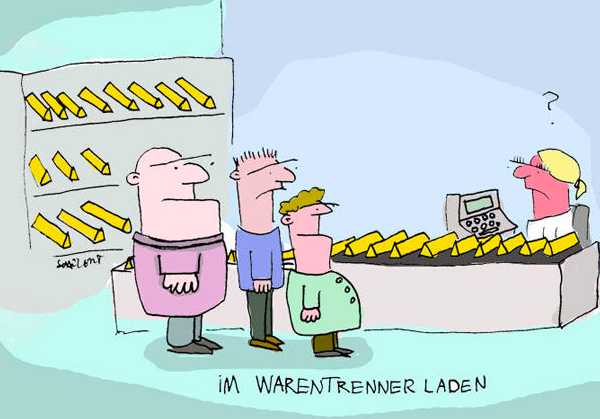 Could it be that the grocery stick has a critical valence in Europe because of how many countries are crammed together on the continent, and the legacy of wars fought over borders between them? Or are we universally territorial? Here on the other side of the Atlantic, where the custom is not as ingrained, we nonetheless view the divider as a source of order and balance. The mere satisfaction of parting your apples from someone’s oranges is a good in itself (although, again, this is not the divider’s actual purpose, and fodder for satire like this blog post about taller conveyor belt “privacy shields”).

Many commented that Costco’s dividers, flipped face down, have a spot where you can tuck your membership card. And for the socially anxious, the bar may additionally serve to preempt any unwanted intimacy with a stranger. Paradoxically, the comforts of this system breed their own kind of anarchy: People worry that the sticks are germ-y, freak out when the store doesn’t have enough, hate that some now feature advertisements, and run the risk of a barrier-related faux pas.

The prospect of cross-divider contamination sounds like a real mental burden for some, and these instances can escalate quickly. Top it off with the knowledge that if you botch your separation or don’t bother with it, you will face a seething, silent judgment… and suddenly a framework of mutual understanding and convenience becomes a minefield.

What’s really on the line, so to speak, is control.

We’re obligated to feed and clean and take care of ourselves, to visit retail businesses that sell the means of doing so. Our choice of products is restrained by a host of factors, including expense, health and access. To demarcate a purely temporary space on the belt at checkout is a choice we are afforded in the midst of this fatalist exercise; we decide not only the proper way of achieving this but why it matters to us. Depending on your reason, the gesture could be friendly and polite, or the microaggression of a racist asshole. That fluidity is what makes the practice dangerous. You’d have to be telepathic to know for sure.

How can this object, basic as it is, contain all that meaning? A deep mystery deepens further. Underneath the subtle fissions of protocol, we are still fascinated by the thing itself, a remarkably thing-y thing, so stupid it epitomizes a kind of genius, so simple that it’s strange to describe. People say their kids like to play with it, that their own affection for it is inexplicable, that stores have trouble with people shoplifting theirs.

“In fifth grade,” one dude relates, “this kid brought one that he stole to school, and everyone thought he was a badass. The next week, I nabbed one and brought it to school, but realized I’d be a total copycat and left it in my backpack all day feeling hot shame. Kept it under my bed for like a year.”

As for me, well, I might be interested because I hardly have the opportunity to sweat the checkout divider anymore. My local supermarket is a Gelson’s, one of a decent but notoriously overpriced chain in L.A., and there, at the cashier, you may set your basket on a shelf (or push your cart against the stall) to let them empty it for you. The conveyor belt is for transporting your scanned items to the bagger. One never shares the belt with the next customer, which eliminates the need for a grocery stick and, I suppose, cuts down on related confrontations. There’s nothing wrong with this approach, but I can’t stop the thought that something’s missing. I’ll admit, it’s a little lonelier this way.