“Flanders, that suit’s a little revealing, isn’t it?” Homer asks, upon seeing his neighbor in his skin-tight ski gear atop Mount Embolism. “Well, it allows for maximum mobility. Feels like I’m wearing nothing at all!” Flanders boasts, as he wiggles his tight ass in front of Homer.

Suddenly, Homer finds himself cascading down the ski slope after trying to back away from Ned’s perfectly-toned posterior. Panicking, he tries to remember the tips he’d gotten from his ski instructor, but the only image his brain can muster is Flanders saying, “Feels like I’m wearing nothing at all!” over and over again.

“Stupid, sexy Flanders!” Homer mutters before doing an involuntary split, having his groin repeatedly pummelled by mounds of snow and finally crashing off the side of a ski jump.

The scene is from The Simpsons episode “Little Big Mom,” from the show’s 11th season in the year 2000, which is typically considered to be toward the tail end of The Simpsons’ “Golden Age.” While the joke was enormously funny at the time, in the years since it’s enjoyed a healthy afterlife at comedy conventions as well as online, where it’s become one of the most enduring of Simpsons memes of all time. But to get to the bottom of Flanders’ sexy bottom, the story doesn’t start with “Little Big Mom.” Rather, the seeds for Flanders’ sexy ass were planted all the way back in the show’s fourth season.

Neil Arsenty, who runs On This Day in Simpsons History on Twitter: “Stupid Sexy Flanders” was an extension of the “Flanders is buff” running gag, where, when Flanders removes his sweater, he’s surprisingly muscular. The first time they revealed how good a shape he’s in was back in “A Streetcar Named Marge” from 1992.

In my first draft, Ned explained to Marge that he developed his biceps working the manual credit-card imprinter at the Leftorium, but that didn’t make it to air.

Carolyn Omine, writer and producer of The Simpsons, writer of “Little Big Mom”: Flanders and Groundskeeper Willie are similar in that way. With their shirts on, they look like they’ve got a little belly, but when they take off their shirts, it’s like, “Whoa!” So, underneath that sweater, Flanders has a really nice body.

Tyler Vendetti, writer of “Here’s Every Time Ned Flanders Was a Total Hunk”: When I was growing up, I watched The Simpsons so much that my dad used to tell time for me by saying things like, “It’s two more Simpsons episodes until we get to grandma’s house.” It was my favorite show growing up, and one of my favorite running jokes in the series is how secretly hot Ned Flanders is. “A Streetcar Named Marge” is a great example of this, as is the episode where Flanders casts himself as God in a short film where Rod and Todd play Cain and Abel.

They also make him hunky in other ways, like when he saves Homer from a fire and that episode where he saves Edna, the teacher, which is an iconic moment because it starts this relationship between them that lasted a couple of seasons.

Omine: There’s one where Homer is making a dating video for Flanders and Homer shows him in the shower and it’s sort of pixelated. From that one, we got this complaint from a viewer who said, “I don’t mind that you pixelated Flanders’ crotch. I just mind that it was so big.”

Vendetti: The very best occurrence of hot Flanders, though, is definitely “Stupid, sexy Flanders.” Nothing beats Flanders in that skiing outfit.

Omine: My first script for The Simpsons was “Little Big Mom,” which was an episode about Lisa taking over for Marge when Marge gets injured. When we first began plotting out the episode, we knew that we needed to find a way to injure Marge, so we built backwards from there. We often do episodes in that form, where the first act is a whole separate set piece that then launches the actual story. That format began before I joined The Simpsons, but I think we do that because animation tends to move a bit faster. Also, that allows the first act to just be this funny set piece that doesn’t have to accomplish too much. It can just be about having fun and then you find a way to get to the story.

For “Little Big Mom,” I think it was George Meyer who had the funny idea that they should go skiing and that Marge wouldn’t ski, but she would get injured at the ski lodge. So we had a clock fall off the wall and break her leg. For the rest of that set piece, we just had to think of funny things about skiing. I don’t ski that much, so much of that came from the other writers.

During this, one of them was talking about how there are those skiers who are really serious about skiing — the skiers who wear those skin-tight suits as if they’re on an Olympic team. We’d done the joke before about Flanders having this amazing body, so it became Flanders in a super sexy ski outfit. We knew we wanted Flanders to make Homer uncomfortable, so we had him shaking his butt and saying, “It feels like I’m wearing nothing at all!”

That was all from the initial meeting, where a bunch of writers would talk about the story. A week later, I turned in an outline that a few senior writers would give notes on. After that, I went off and did my draft.

I have a very concrete memory of coming up with the line “Stupid, sexy Flanders,” but one time someone said that someone else may have come up with it. It’s really hard to keep it all straight sometimes, not only because there are so many jokes in a show, but there are also so many rejected jokes as well. As a writer, you tend to get them all mixed up. But, yeah, I don’t know. I thought I came up with it. Who knows.

“Nothing at all!” and “Stupid, sexy Flanders” were in my initial draft, and, after that draft has been handed in, the group of writers goes over it. Then we do a table read, then we go over it again. After that, it’s recorded. Three months later we get an animatic, which is sort of a rough animation. Then we do another rewrite and oftentimes quite a bit changes there. Six months later, we get the color animation. At that point, we can’t really change too much because of time constraints and money, but we can change a little — we can put lines in when someone’s head is turned away and things like that. Then you add the music and sound effects and it’s done. Altogether, the animation takes nine months, and the whole process takes about 11 months. Fortunately, “Stupid, sexy Flanders” made it through all that and made it to air.

Arsenty: “Stupid, sexy Flanders” is such a great moment. It’s really impressive how good a shape Flanders is in, especially at 60 years old!

Omine: Starting around the year 2000, The Simpsons started doing a panel at the Aspen Comedy Festival, where there were clips from the show and live readings and things like that. For years, “Stupid, sexy Flanders” began that clip reel, and it always got a huge response, so I knew it was a crowd pleaser.

Vendetti: The image of Flanders’ ass, as well as him saying, “It feels like I’m wearing nothing at all,” gets stuck in Homer’s head in that episode, but it also gets stuck in your head as a viewer, which is why I think that joke has become so popular online.

Don Caldwell, internet historian and editor-in-chief of Know Your Meme: “Stupid Sexy Flanders” is a pretty big meme. It’s not in the top five Simpsons memes, like “Steamed Hams” and a few others, but it’s a pretty big meme as far as Simpsons memes go. There’s a community called “Simpsons Shitposting,” and whenever there’s a butt that resembles Flanders’ butt, people will reference it and say “Stupid, sexy X,” depending upon who it is. The earliest example of this seems to be “Stupid Sexy Snake” from 2007. In the clip, the character Samus from the video game Metroid and Snake from Metal Gear take the place of Homer and Flanders.

Simpsons memes are pretty unique in that they tend to live for a long time. The Simpsons is such a cultural institution in the West that these memes persist for years. This scene in particular is very memorable and it’s really simple and versatile, which is why it has such power as a meme. 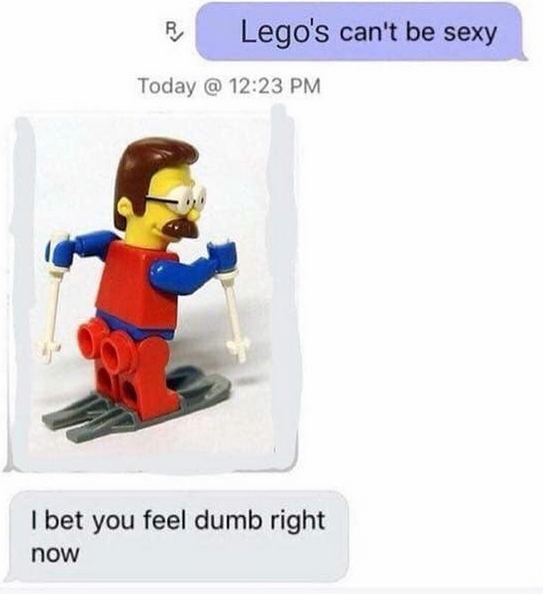 Omine: Oh, one more thing. I remember when we first came up with the joke, we said that his ass should be really shapely — we made that clear. But when we got the animation back we wondered, “Is it too much?” After a while we decided to just go for it and that was definitely the right call. Flanders is very hot — he should show it off.