Money-management stripper influencers often encourage fellow dancers to invest in real estate and become landlords, transforming themselves from the working class into the class that exploits it

Many dancers may not have a retirement account, an asset manager or a robust stock portfolio. What they do have, though, is a down payment on a house. Facing the hurdles of transitioning into vanilla lines of work and wealth, strippers with a stockpile of cash saved up may turn to real estate. For many, real estate represents an investment with a material reality, a physical form of financial legitimacy. While the real estate market can be just as volatile and complicated as stocks and independent retirement accounts, it at least feels tangible.

As such, there are former dancers who have emerged from the club to become sort of real estate investing gurus. On Instagram, dancers like @InvestorStripper share memes and stripper-centric advice on purchasing properties for the sake of renting them out, or encouraging dancers to live “rent free” by buying a home and getting roommates who pay rent to cover the mortgage. In one post, for example, she made a cutesy diagram explaining how one can take out an owner-occupied home loan in order to purchase a building with up to four units. At the end of her caption, she mentions how she’ll be releasing an ebook at the end of December on the topic of real estate investing. 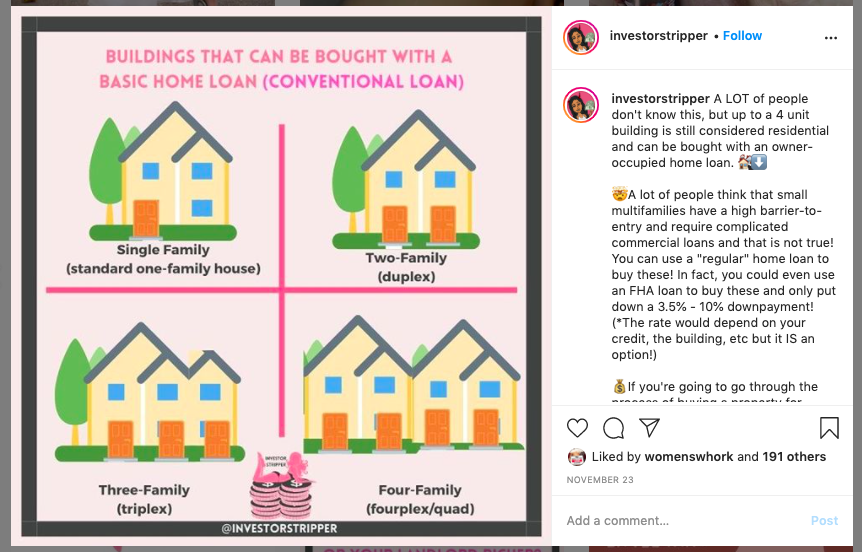 The politics of it all, though, are complicated. On the one hand, flipping houses or leasing apartments seems like one of the few narrow paths toward financial independence otherwise afforded only to those born into wealth. On the other, doing so might contribute to the gentrification and landlordism that furthers the rift of wealth inequality in the first place.

Of course, this is a fraught topic for many outside of the adult industry, as well. But dancers often face particular difficulty in simply obtaining housing for themselves. Marla, 25, a currently-unemployed dancer in Texas, knows this well. Despite having a perfect rental history, good credit and plenty of savings, her status as an “independent contractor” made landlords hesitant to rent to her. With one apartment Marla applied for, a landlord decided to turn her down despite the fact that the unit had been sitting vacant for three months.

As a socialist, Marla has been vocal about the labor issues she and other dancers have faced; the label of independent contractor and the lack of protections it provides to workers in and out of the workplace is only one example. She’s critical of the money-management advice some dancers online give, particularly those who have turned to real estate. Yet, she understands the tendency.

“The aspirational success of stripping is, beyond the short-term gain of quick cash, class ascendency,” she says. “A lot of dancers first enter the industry due to an emergency that could be solved with a quick $1,000. That emergency could be as mundane as rent due in three days or as horrific as escaping an abusive partner. When people in precarious situations begin to make enough money to be safe and comfortable, there’s a shift from survival mode to hustler mode.” 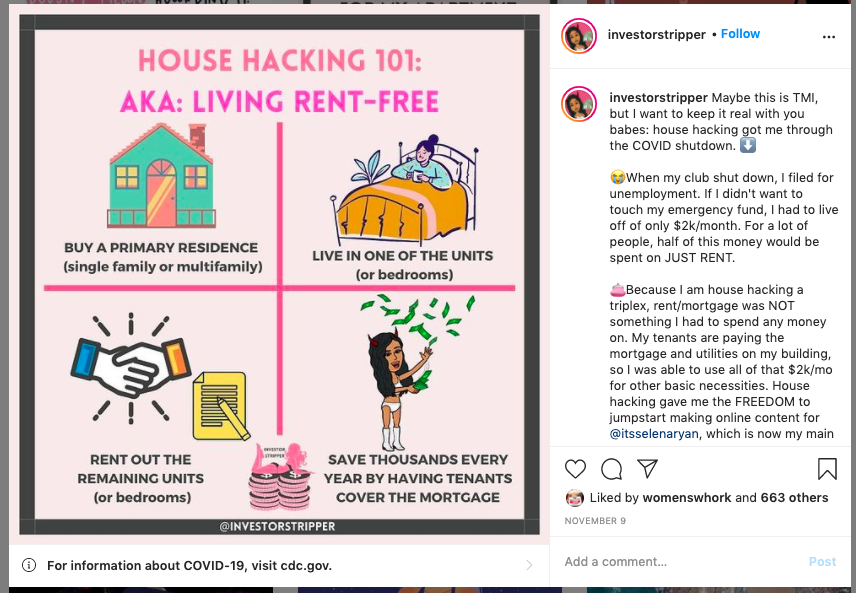 This is where the problem begins: Once some dancers no longer identify with their previous class struggles, they no longer identify with the class struggles of those who continue to experience them. “The further you get from struggling alongside the working poor, the more appealing it is to integrate yourself into the class that exploits the working poor,” says Marla.

Of course, it’s not an ideology that strippers are themselves responsible for creating — instead, Marla sees it as a continuation of liberal feminist narratives of individual empowerment.

“There’s a kind of capitalist realism underpinning the landlordism of girlboss strippers,” she says. “‘Somebody’ is going to be buying these properties, ‘somebody’ has got to be the landlord and it’s best if that somebody were ‘me.’”

Becoming a landlord may be perceived as one of the only ways for a current or former dancer to continue class ascendancy, even if it means ultimately exploiting others. Others, more specifically, who represent the class status that possibly pushed one to become a dancer in the first place. “Capitalism has such a stranglehold on our imagination, we cannot fathom a society without a rentier class,” says Marla. “We can only imagine becoming them.”