In Africa, men have jokingly vowed not to pay on dates — and the manosphere is watching

A recent rumor had it that after their breakup, Quavo took back a Bentley he’d given to fellow rapper Saweetie for Christmas. Followup reports cast doubt on the repossession story, but the internet will always prefer juicy celeb gossip to official denials, and one group was especially amused by the idea of un-gifting a luxury car after a romantic relationship had come to an end. They are the Stingy Men Association, and they live to deny women any material generosity.

In truth, the Stingy Men Association isn’t a single body, but a loose confederation of social accounts connected by memes and the cultures of several African nations. Since January, they’ve gained massive exposure thanks to Nigerian celebrities with massive platforms. The singer Don Jazzy, who has nearly 6 million Twitter followers, posted an image of his SMA card, and has appeared in Stingy Men sketches opposite the comedian Mr. Macaroni, whose Instagram videos reach an audience of nearly 2 million. As Mr. Macaroni typically plays the character of a sugar daddy — a horny guy who can’t help spending lavishly on the ladies — he is the perfect foil for the stern and tightfisted Don Jazzy, who tries in vain to keep him from emptying his bank account in pursuit of sex. This, naturally, is everything SMA stands against.

It would be a mistake to think of the Stingy Men Association as a legitimate movement instead of an elaborate gag, but the idea is not without disturbing ramifications. The SAM of Zambia, one of the first regional chapters, launched a Facebook page in October, and a month later, the Zambian Observer published an account of domestic violence connected to the organization: After repeatedly denying her the money to get her hair done, saying it was against his principles as a SAMZ member, a businessman allegedly assaulted his wife and broke her arm, for which he was arrested. According to the victim’s account, his refusals had begun as a “joke” and escalated.

Whatever the facts of the incident, and despite an official condemnation from the SAMZ page, the article would seem to have taken the Stingy Men concept viral throughout the continent — in addition to the popular Nigerian promoters, you can now find accounts representing the club for Ghana, Cameroon, Uganda, Zimbabwe, South Africa and Botswana. 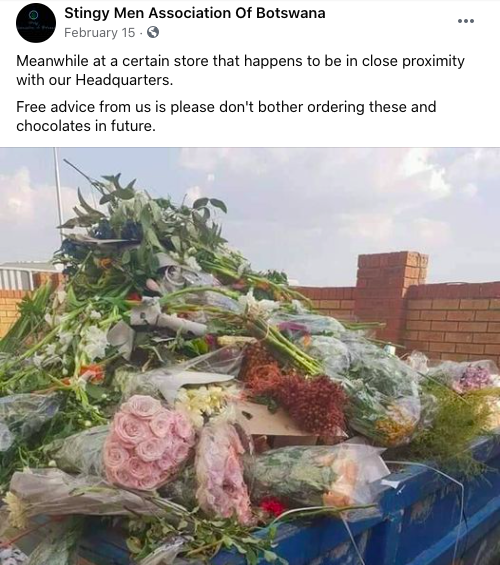 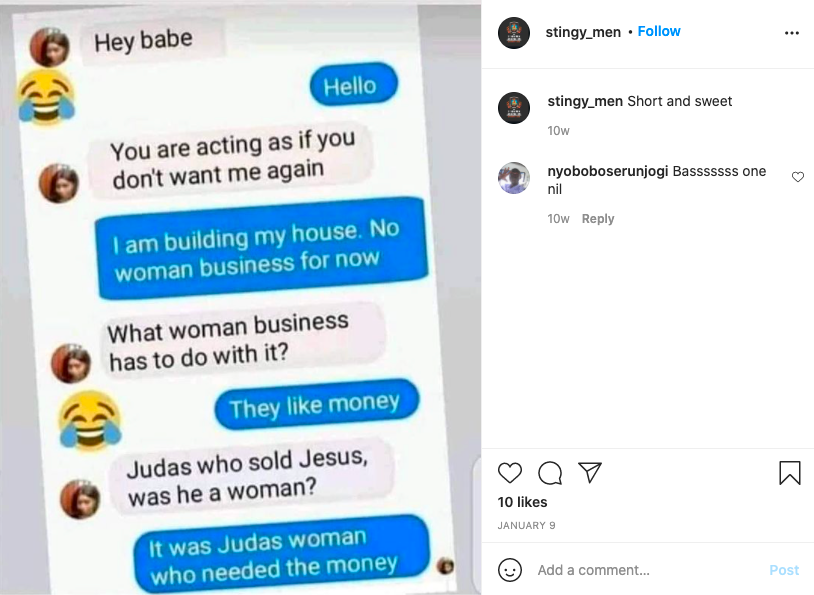 On the one hand, there should be space for humor around the performance of outdated gender roles. We will never move past the stagnant philosophy that only men can provide and women must rely upon their wealth, trading sex for financial support, if we cannot grasp the absurdity of it. But the danger, as in the Zambian case, is that the bit may turn deadly serious. The Stingy Men revel in text exchanges and staged videos where women are told they will have to get a job or pay for their own meal if they want to eat — their motto, “let me see what I can do,” is the ultimate brush-off for when a girlfriend is in need of a cash infusion, the clear subtext being: “No, and don’t ask me again.”

None of it acknowledges the societal structures that may prevent a woman from earning as much as her male peers, and while a lot of the memes present as good-natured ribbing, some give off the misogynist air of men asserting their dominance, or buying into the same patriarchal norms they mock with that self-applied pejorative.

As the content begins to spread globally, red-pilled Western men have been drawn to the withholding and punitive aspects as glimpses of “true gender equality” under feminism. On the subreddits for Men’s Rights and Men Going Their Own Way (MGTOW), users take the often satirical SMA at face value, commending it as an extension or parallel of their own ideology, which vilifies women as gold-digging sociopaths who have no interest in personal connection.

Unable to recognize that some Stingy Men are less than sincere in mocking up membership credentials — a kind of shitposting about their own admitted cheapness — some redditors and other outside observers even fail to notice that “Stingy” is a word chosen by the men, not their “woke” critics. And while Mr. Macaroni’s comedy, for example, derives from his constant failure to live up to the masculine ideal of stinginess, these committed sexists identify true potential in such a fraternal oath. When it comes to enacting their beliefs, the actual Stingy Men are more likely to attend a Valentine’s Day investment seminar on Zoom than spurn a woman who shows interest in them. 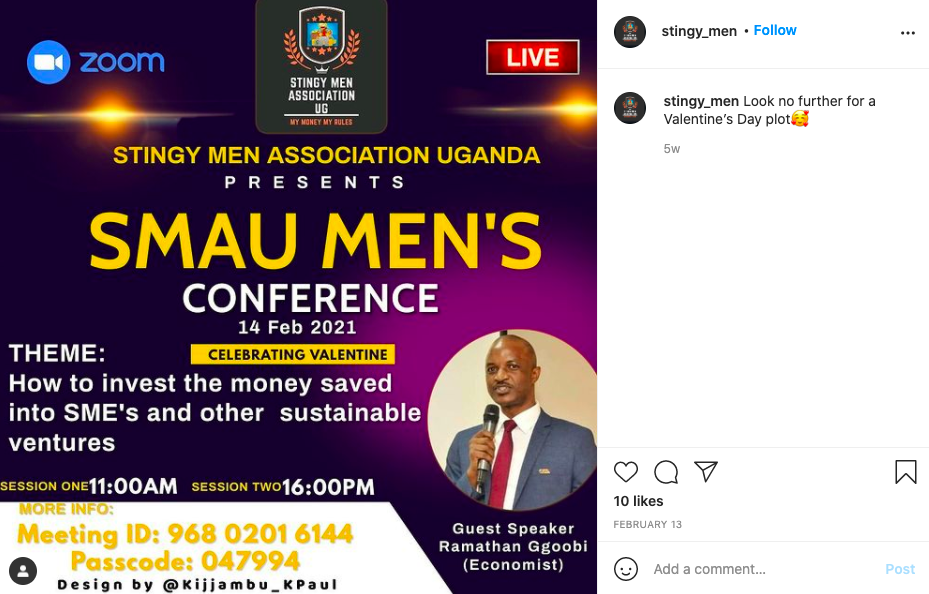 That SMA is a broad patchwork, though, means its subscribers and admirers can interpret and apply it however they choose. Where some find it tongue-in-cheek, some want to mainstream it as a significant evolution within the earnest, toxic manosphere. After the comedians have had their fun with the T-shirts and YouTube collabs, the framework will be left to the radical anti-feminists in need of more ways to denounce women seeking money or attention — the men already railing against “simps” and the rise of OnlyFans. This coalition is too hateful to let any gloss on gender remain a harmless joke for long. In time, it all becomes more furious dogma.