Inside the Cult of Starbucks Egg Bites

The $4.45 egg bites are Starbucks’ first signature breakfast food with a viral following. Are they worthy of the acclaim?

In 2017, Starbucks debuted sous vide egg bites: a protein-packed, low-carb breakfast item. In just over two years, these gelatinous dollops have become a status symbol for today’s stressed-out and pseudo-healthy workforce, alongside AirPods and the blue gingham dress shirt. The $4.45 egg bites are Starbucks’ first signature breakfast food with a viral following. Are they worthy of the acclaim?

Having seen one too many people tweet about their egg bites obsession, I finally asked my Twitter timeline (mostly journalists, writers and extremely online media professionals) what the stock image of Starbucks’ egg white and roasted red pepper egg bites means to them. I quickly learned that the little round cardboard tray is one of the few constants in an increasingly chaotic world.

Let’s start with the name: egg bites. Starbucks should have opted for one of egg bites’ more interesting nicknames: like “shark eggs,” “vomit muffins,” “pepper biscuits” or (my personal favorite) “bougie bullshit.” Joel Luther, an associate in research at Duke University, says he looks at a pair of egg bites and just thinks “balls.”

Next: What are they, really? These mini egg-white frittatas look like Funfetti muffin tops, but they’re spongy, bulbous egg pearls cooked in a low-temperature, vacuum-sealed boil and reheated at your local Starbucks in countertop oven.

That description is enough to turn some customers away. For film critic Katie Walsh, egg bites mean a burned mouth. Researcher Caroline Sinders says they taste like rubber. The most searing review comes from writer Gwen Kansen, who says, “There’s always something stale about Starbucks’ food offerings, even if they aren’t actually stale.”

Eater’s Meghan McCarron investigated the true origin of the egg bites, which she calls “unicorns of non-food diet food.” She concludes in her piece that egg bites are “hefty and cheesy, and not direct substitutes for some other, better treat.”

But when you’re far from home and yearning for something familiar, egg bites can be the most trustworthy food option. “They’ve gotten me through too many airport layovers with my new job,” says Charlotte Carroll, a college friend who’s now a staff writer for the Athletic. Adds writer Tiffany Wong, egg bites are “a sad Starbucks breakfast before getting on an early morning flight.” For Max Levy, they’re the “on-the-go” meal for when you “need calories and have money but no time.”

If, like many, you consider egg bites a cultural icon, their stan leader is New York Times technology reporter Mike Isaac. In a recent Grub Street entry outlining what he ate during a trip to New York, the author of the bestseller Super Pumped: The Battle for Uber says he consumed over four orders of egg bites in five days. When I solicited odes to the breakfast staple, fans readily awaited the word of Egg Bite Isaac. What are egg bites to him? A “comforting, proteiny sustenance” that “feels like home,” he writes.

I tried egg bites for the first time (!) while writing this piece. Would I become a convert, even though I live in a Brooklyn neighborhood teeming with breakfast-food options? I was, at first, a bit put off by the appearance: a middle-school science display of some cellular process. 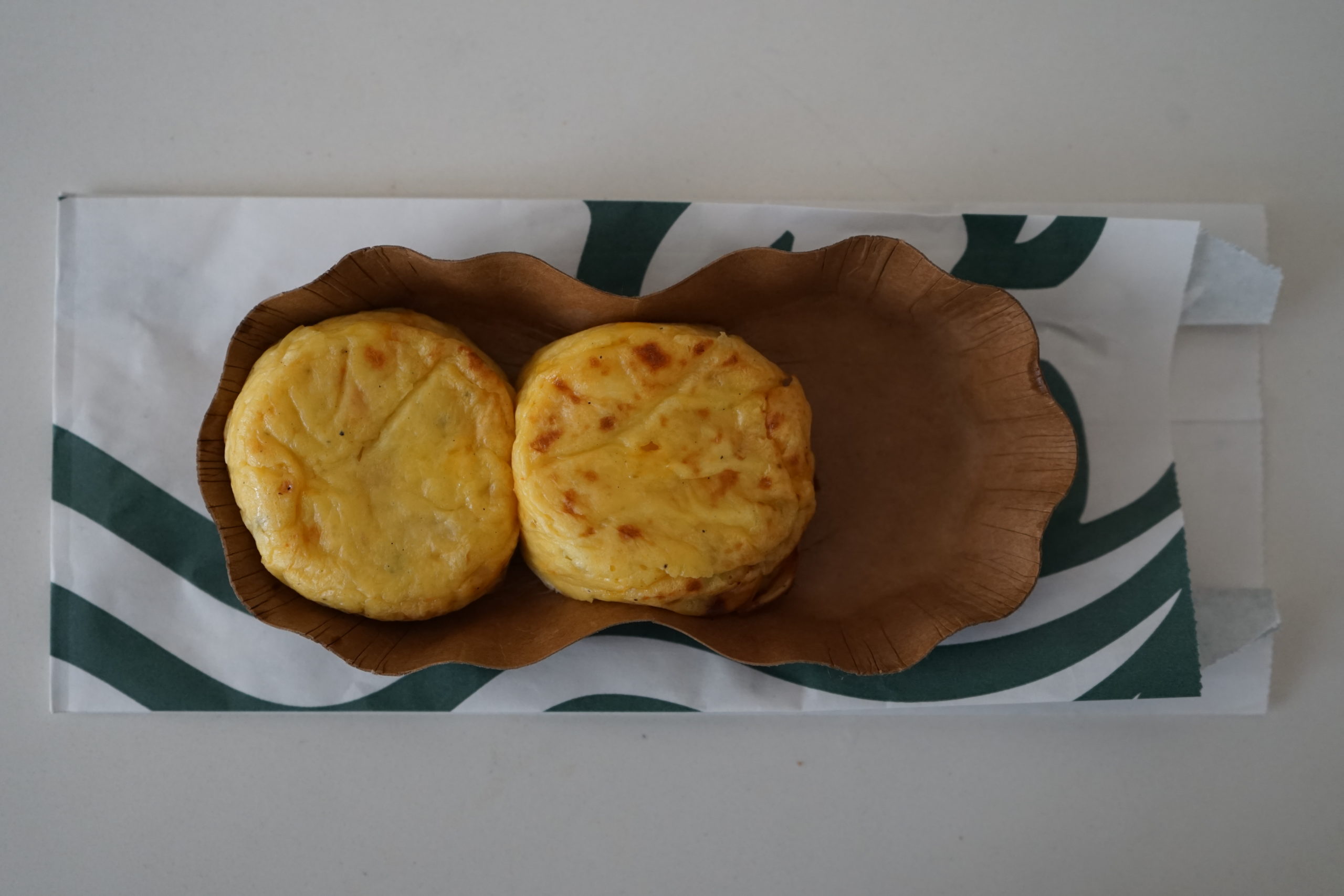 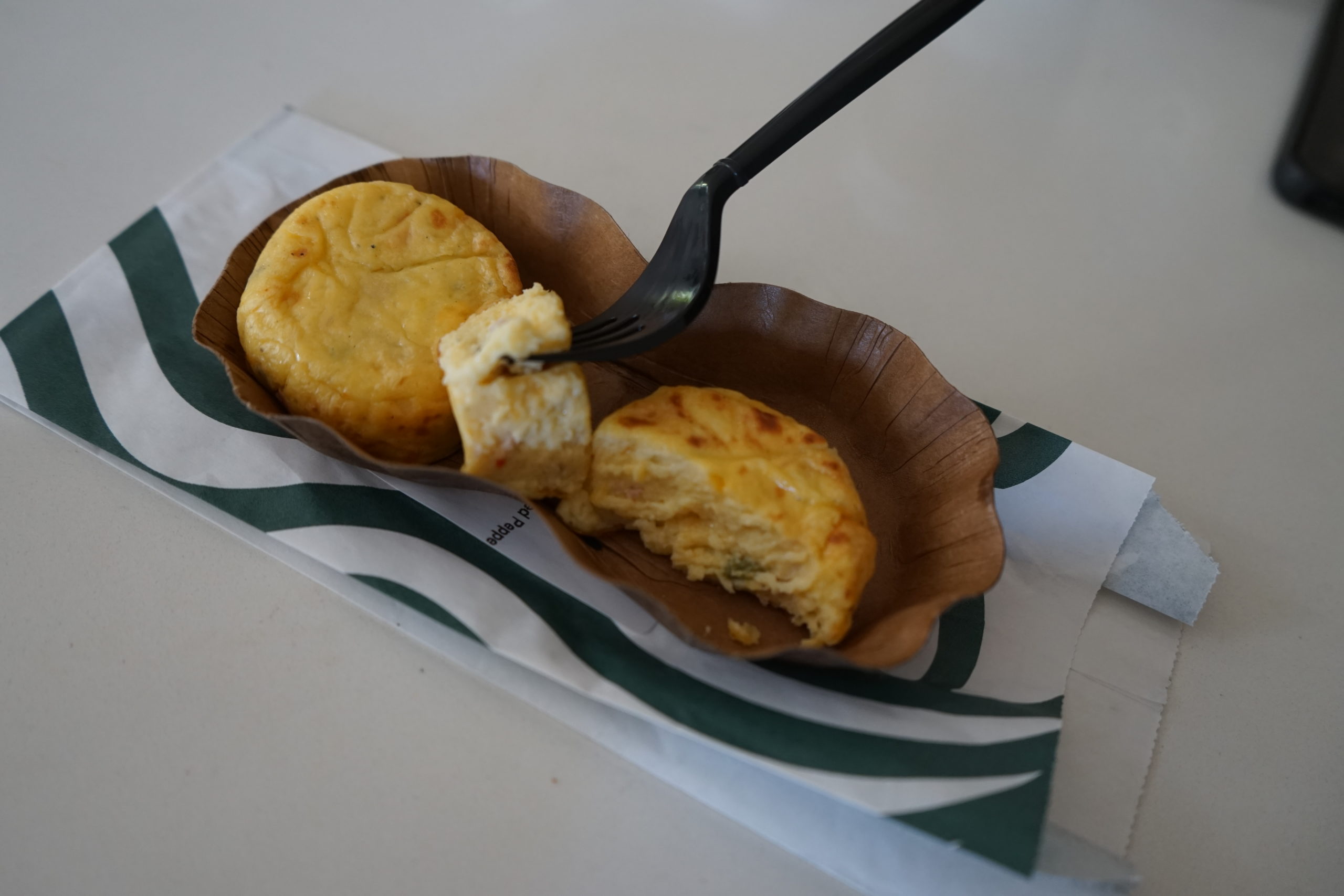 But I have to admit that for what they are, the bites are impressive. It seems Starbucks has created the low-calorie answer to a high-carb fast-food market. Strategic advisor Michael J. Miraflor calls them “the Starbucks equivalent to McDonald’s chicken nuggets.” They satisfy without weighing you down, and most importantly, they’re everywhere you look. Starbucks has over 15,120 locations in the U.S.

The egg bites’ sole competition is probably Dunkin’s Wake-Up Wrap, previously one of the few “healthy” egg-based fast-food breakfast options. The Wake-Up Wrap is cheaper than egg bites by about a dollar, depending on your city, which is why Dunkin’ loyalists like my colleague Magdalene Taylor are weary of the egg bites army.

We may be fooling ourselves if we think egg bites are actually part of a nourishing diet. The item is not healthy, it’s healthy-ish. You’re scarfing down 470 milligrams of sodium in a pair of egg bites, which is equivalent to a Gatorade, RXBar or four Reese’s Peanut Butter Cups.

Of course, ease and comfort matter too. I just have a suspicion that the reason we don’t feel nasty after eating them is due to their size, not their nutrition. They’re hardly half a meal.

Maybe the idea of the on-the-go healthy breakfast is just another modern Trojan horse. If anyone’s wallet and belly are feeling full after all these egg bites orders, it’s Starbucks’ CEO.