Speed Racer Is a Toxic Piece of Shit

Our fast protagonist is a handsome, ambitious narcissist whose abuse knows no ends — like Patrick Bateman in a supercar. He’s the model of a man we must all try not to be

What does it take to make an anime from the late 1960s go viral on the internet half a century later?

Nobody seems to know how or why Speed Racer started trending on Twitter in August, but it did. I got hit with a wave of nostalgia while stumbling across vintage clips on the timeline; there’s something about that jaunty opening tune (“Here he comes, here comes Speed Race-er…”) and the beautiful colors in the cel animation that transport me to Saturday afternoons in front of the TV. Speed Racer is one of the earliest Japanese animes to make it across the Pacific with dubbed dialogue, and was key in acclimating Americans to the style.

As it turns out, however, Speed and the show have been harboring some dark secrets. We should have taken the warning signs more seriously, especially 12 years ago, when a low-res parody video propped up depicting Speed as a crazed maniac. But now, with the scrutiny of going viral in 2020, it’s become clear that Speed (originally named Gō Mifune) is no mere wunderkind racing champion. His theme proclaims that he is “a demon on wheels” — and based on his sociopathic tendencies and appetite for lashing out, that sounds about right.

Much of the credit for these revelations belongs to YouTubers BattleJesus and TheKasl, who have meticulously documented Speed’s transgressions over the course of years. Spurred on by the Twitter-trending traffic, hundreds of thousands of Extremely Online™ weirdos turned to their videos to discover that the evidence of Speed’s toxic behavior is damning.

In one scene, we see Speed in the middle of race, when his partner Trixie radios in from the helicopter with important news: One of Speed’s competitors has an ill sister who will die unless they secure the first-place winnings and pay for the treatment. Without hardly a moment of consideration, Speed begins to berate her. “Why should I let him win? I’m out to win myself! Now sign off and don’t bother me!” he spits.

Trixie tries to reason with him, but it’s no use. “Doesn’t matter to me what his reasons are. It wouldn’t be playing fair if I let him win on purpose,” Speed retorts, rambling with a cokehead’s cadence.

With a click of the radio, she’s put on mute. He floors the gas pedal and surges to a win, then feigns ignorance of the consequences of his actions afterward, smiling dumbly under the glow of flashing cameras and falling confetti.

Frankly, I see reflections of another handsome, ambitious narcissist in Speed’s dead eyes: Patrick Bateman from American Psycho. In multiple videos, we see Speed taking satisfaction in the gruesome, fiery deaths of others. He is constantly inserting himself into potentially fatal situations, and he makes the decision to end life with frighteningly little moral consideration. (Fun fact: Speed is responsible for the deaths of two nation-state leaders. In both cases, he couldn’t help but stare at the ruins of human lives, soaking in every second with a barely disguised grin.)

Not even his loved ones are safe from his egomaniacal rage. Speed constantly tells Trixie to, basically, shut the hell up because she’s a woman. (A typical line: “This is no time to act like a girl, Trixie!”) His insecurity and need to win at all costs bubbles over in abusive acts constantly, including in one moment when Trixie’s younger brother Sparky confesses that he’s scared for Speed’s safety.

“Do you think I’m afraid? Is that what you think about me? If you do, cut it out, I’m not scared!” Speed yells, yanking the 10-year-old up by the collar and throwing him down to the ground.

It’s unclear what Speed’s childhood was like, but I can’t help but wonder if his estrangement from his brother, Rex, is a factor in his maladapted fits of rage. But even these bursts of emotion are rare events in comparison to his quiet, calm bloodlust. Nothing can excuse his body count, which are mostly second-degree murders disguised as collateral damage of racing. His sociopathy has no clear boundaries. He will run you off the track in a race, sure, but he will also grab the last parachute from a falling plane — then stare you dead in the eyes as he jumps.

Thankfully, the truth is now out, and an endless string of comments left on these videos within the last month reaffirm that Speed is a model for the kind of man we should all strive to not be — selfish, narrow-minded, violent on a dime and endlessly condescending. I never wanted Speed to be Milkshake Ducked, but this is the cost of rising to internet fame in old age, half a century after his prime. These revelations ought to teach us something — about the failures of masculinity, the harms of endless competition or perhaps the way we lash out at the people we love.

Sometimes, winning the race needs to matter least. It’s too late for Speed, but not for us. 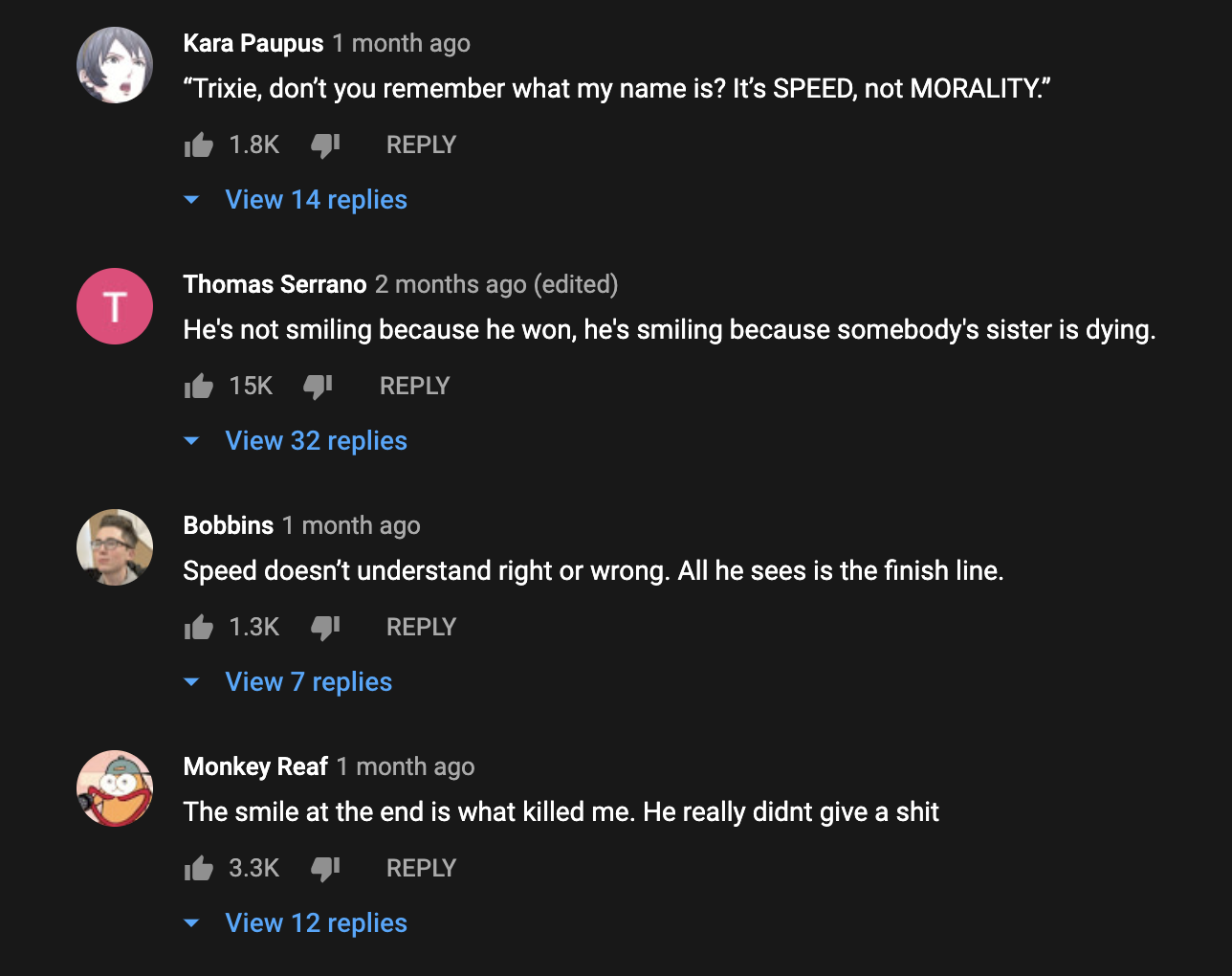