The central story of the 1996 film Space Jam is well-known: Michael Jordan links up with the Looney Tunes for a high-stakes game of basketball against a team of alien slavers armed with the stolen talent of five NBA stars.

I recently rewatched Space Jam and was struck by a series of labor-related jokes I understandably failed to notice as a kid. Children’s movies are notorious for including adult humor as a way to keep parents entertained, but most examples tend toward the ribald: Buzz Lightyear’s winged erection in Toy Story 2; an Oedipus joke in Hercules; or the more recent “foot size doesn’t matter” quip in Frozen.

But as someone who has worked both union and non-union jobs, I sympathize deeply with the more consequential struggle in Space Jam. In the film, Daffy Duck acts as a would-be organizer advocating for the rights of Looney Tunes and decrying the inequities in the entertainment business. The movie’s first union joke appears after the aliens arrive in Looney Tune Land, when a worried Porky Pig convenes an “emergency cartoon character union meeting.” The next shot depicts a building named “Union Hall 839” — a nod to the real-life Animation Guild, I.A.T.S.E. Local 839. 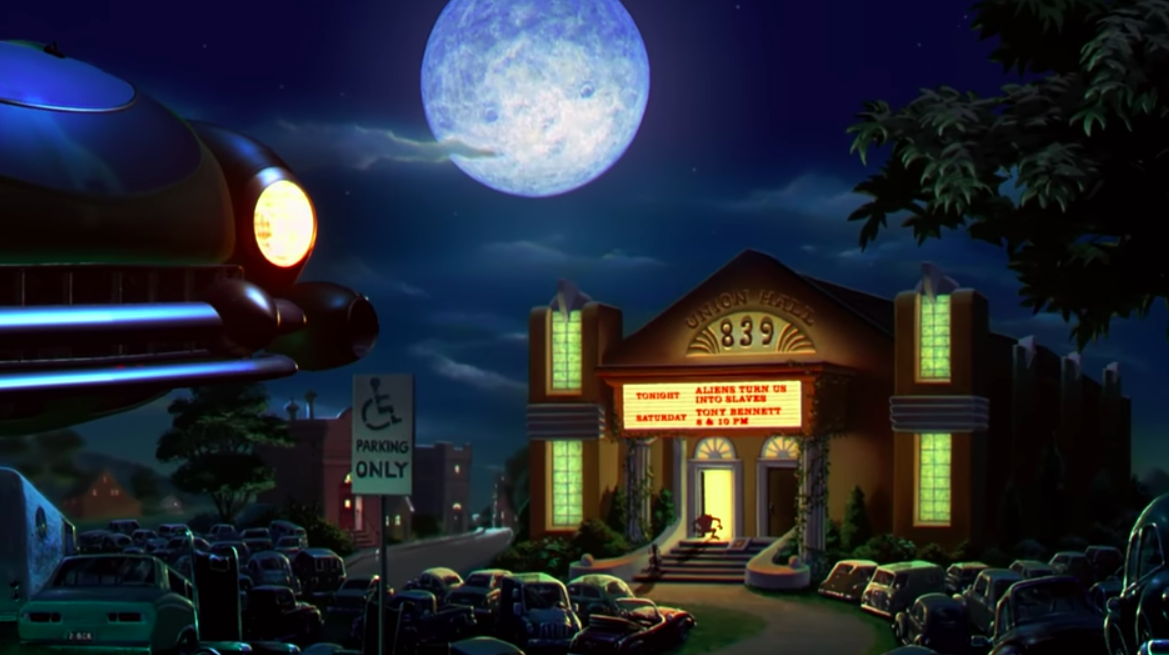 “The gag was actually written in the script, but us placing the whole thing at the union was us. That was the artists,” explains Bruce W. Smith, Space Jam’s animation director. Smith says that the animators felt it was crucial to honor the historical identities of the Looney Tunes characters, hearkening back to the golden era of animation in the 1940s. It was a time defined by great labor strife across the industry. In 1941, for example, Disney animators went on strike for five weeks over disparate pay and profit-sharing. Four years later, in October 1945, 3,000 film workers, including picketing animators, clashed with Burbank police in front of Warner Bros., the studio behind Looney Tunes.

Precursors to Space Jam reflect the labor tensions of that era, like the 1940 short You Ought to Be in Pictures, another live-action/animation combination. In the film, Daffy convinces Porky to quit his TV job to chase a more lucrative career in feature films. Porky tenders his resignation to Warner Bros. producer Leon Schlesinger, only to find little success on the silver screen. Returning to discover Daffy plotting for his old gig, Porky successfully petitions Schlesinger to reinstate his Warner Bros. contract. “Cartoon characters often appear to be voicing the perspectives of animation artists in relation to their bosses. Sometimes this is quite explicit,” says Matt Stahl, a professor at Western Ontario University who has written about the history of animation and labor.

Though enslavement on a faraway planet represents the most immediate threat in Space Jam, the Looney Tunes are also concerned with the biggest source of Hollywood labor-versus-management hostilities over the past half-century: royalties. When they’re sent by Jordan to receive his prized basketball shorts, Bugs Bunny asks Daffy whether he “sees any money” from “all these mugs and T-shirts and lunchboxes.” “Not a cent,” Daffy gripes. “It’s a crying shame. We gotta get new agents. We’re getting screwed.” As Bugs orders him to continue searching, Daffy mutters under his breath, “If this were a union job…”

Who actually wrote Daffy’s lines has been lost in the fuzziness of time and the collaborative nature of a live-action/animation project. “I’ve been asked lots of questions about Space Jam over the years,” Herschel Weingrod, one of the film’s writers, tells me. “But these are the first about labor organizing subversively making their way into the film.”

Weingrod and his writing partner Timothy Harris, the duo behind the 1983 Eddie Murphy classic Trading Places, joined the project to rewrite the original script. The first draft was written by Steve Rudnick, who didn’t return requests for comment, and the late Leo Benvenuti. Weingrod has no recollection of who wrote the union jokes, while Harris, through a spokesperson, says he believes they were written by the animators. But Smith, the animation director, says the dialogue was scripted.

Everyone, at least, agrees about the provenance of the movie’s final union joke, when Bill Murray, playing himself, answers a question from Daffy about how he was able to get to the game in Looney Tune Land. “Producer’s a friend of mine. Just had a Teamster come and drop me off,” Murray says, referencing the most well-known union in the country.

“He was telling the truth. That’s the funny part of that joke,” Smith says of Murray, a famous ad-libber. “Somebody dropped him off, and he was doing a favor for Ivan [Reitman],” the Space Jam producer who directed Murray in Meatballs, Stripes and Ghostbusters.

A perpetually self-interested duck, Daffy’s investigation into important Hollywood-business issues like residuals and casting is prescient. Space Jam was in production during an era that we now know as the 1990s animation renaissance. The late-1980s success of The Little Mermaid and Who Framed Roger Rabbit sparked a wave of Disney blockbuster animation features, most notably The Lion King in 1994, which at nearly $1 billion in box office sales was the highest-grossing movie of the year. As such, newcomer studios like Dreamworks (The Prince of Egypt, Antz) threatened Disney’s animation hegemony, and Warner Bros. made its move with Space Jam (and the box-office bomb Quest for Camelot). Meanwhile, shows like The Simpsons and Ren & Stimpy redefined TV animation.

The resurgence brought a much-needed spark for working animators, who were coming off a rough few years. In 1979, Local 839 struck over “offshoring” to foreign subcontractors. The union won some concessions, but in 1982, they went on strike again and were defeated. “Almost 40 years later, the shadow of that strike still echoes,” says Charles Zembillas, an animator and character designer. In 1999, Zembillas used his website Animation Nation to launch a series of jeremiads about the state of the animation industry, decrying callous boom-time layoffs and mismanagement from production executives. “What Daffy Duck was talking about was very real, and it’s still happening today,” Zembillas tells me.

Indeed, while animator salaries skyrocketed during the runaway success of the 1990s, “the highest-paid animator in the world doesn’t make one-tenth of what a Hollywood celebrity makes,” Tom Sito, who headed the animation union at the time, told the L.A. Times in 1999. In an email to me, Sito describes his tenure at the union as an era of “wheeling and dealing for our members.” The Writers Guild of America (WGA) and Screen Actors Guild (SAG) “were also pushing for better salaries for animated work,” he says.

That jockeying resulted in a fracturing of sorts within the animation world. The writers of The Simpsons, for instance, organized in the late 1990s with the WGA, a trend that continues in TV animation today. WGA is an “above-the-line” union whose members are recognized as creatives who, like actors and producers, generate lucrative personal residuals, too. Animation workers like storyboard artists, on the other hand, are still typically unionized by the “below-the-line” Local 839. As a result, residuals feed into a broader union-benefit pool. Though they perform clearly creative work central to a project’s story, “artists from an animation standpoint aren’t treated the same way as live-action creators, and we’ve never had the power to retain rights to projects,” Smith says.

That split has been a renewed source of consternation for some in the animation industry as Hollywood churns out 1990s remakes like The Lion King and Aladdin, according to the Hollywood Reporter. Despite the fact that some of the best, most profitable films of the 1990s were animated features, animators themselves don’t receive the kind of credits (and royalties) commonplace in the industry when projects are rebooted.

And what’s the next beloved 1990s film to receive the nostalgia treatment? Space Jam, of course. Daffy, it turns out, was on to something. Starring LeBron James and produced by Ryan Coogler, Space Jam 2 is due out summer 2021. The script remains under wraps, so it’s impossible to know if Daffy has solidified the support of key stakeholders for the union drive. Maybe he’ll find fresh complaints about the modern media ecosystem (like how he’ll have to perform on demand on HBO Max).

Either way, experts in Looney Tunes mythos like Stahl posit that collective bargaining might find more success if Bugs Bunny, the real kingpin cartoon, were to take up the cause. Or as Stahl puts it, “There would be more moral authority coming from him.” Steven Perlberg is a reporter in Berlin.