We Asked the ‘Sopranos’ Cast to Settle the Sauce vs. Gravy Debate

‘My political stance is to not say ‘sauce’ or ‘gravy’ — just eat the food and shut the fuck up.’

Is it sauce or is it gravy?

It may seem like an innocent enough question, but the online discourse over the proper name for tomato sauce has raged on for years, even being dubbed “the never-ending Italian-American debate.” At the center of this conflict is The Sopranos, not only because the show is synonymous with Italian food, but because it’s fueled those on “Team Gravy” with its repeated use of the word.

But the Sopranos guys wouldn’t want warring between the families, so I reached out to some of them to put an end to all of this infighting — to hold something of a virtual sit-down, if you will. But I didn’t want to talk to just any cast members of The Sopranos. First of all, I’m legitimately afraid of Tony Sirico, so I wouldn’t want to ask him. And while you might think it’d make sense to ask John Ventimiglia — who played chef Artie Bucco — the man isn’t really a chef. Realistically, it made sense for me to reach out specifically to the Sopranos cast members who have sold their own celebrity sauces — of which there are four! — so that’s exactly what I did.

First up is Vincent Pastore, who played Big Pussy. Last year, Pastore launched Vinny Pastore’s Italian Sauce at SopranosCon, and since then, the sauce has been all over Instagram with a passionate push for Team Sauce. The sauce account’s description even says “#SAUCE. NOT GRAVY, PERIOD.” When I ask him why he’s so passionate about being on the sauce side of the argument, Pastore tells me, “The manufacturers call it sauce, a lot of people in America call it sauce, so I’m calling it sauce.” Despite this, Pastore admits, “When I was growing up, my mother called it gravy, but when you go to the grocery store, there are no jars of red sauce that say ‘gravy’ on it, so I’m not calling it gravy, I’m calling it sauce.” 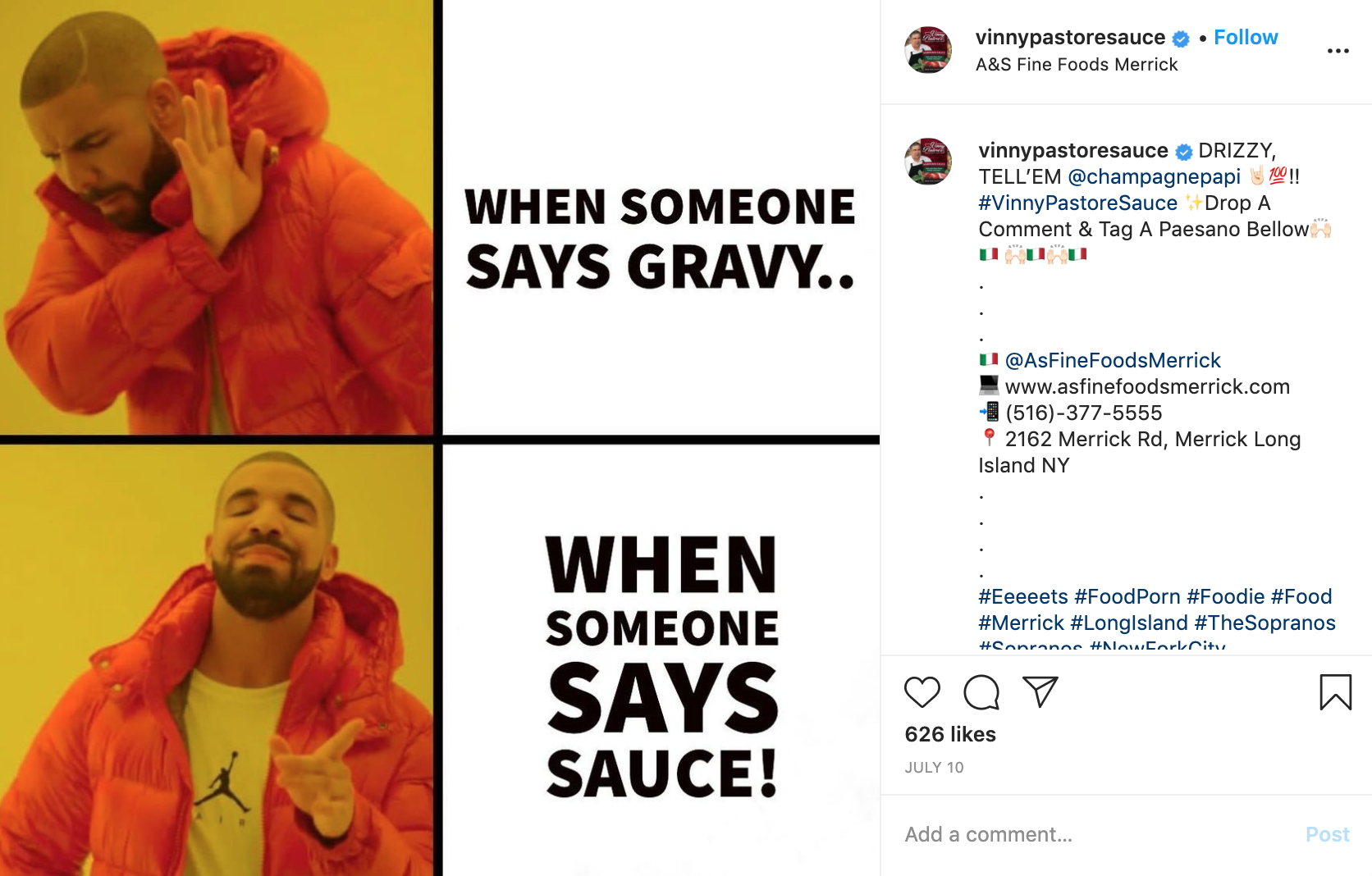 So, simple marketing is the reason for Pastore’s conversion from Team Gravy to Team Sauce. But when I speak to Joe Gannascoli — who played Vito Spatafore — he’s much more passionate on the subject. Gannascoli, who grew up in Brooklyn, tells me, “In New York, it’s always sauce; in Philly, it’s gravy. They call it gravy because there’s meat in it, but if there’s no meat in it, is it still gravy? I don’t even know. I don’t get that whole thing.” Gannascoli used to be in the sauce business, but he got out of it a few years ago. Now, in addition to his acting, he’s a private chef throwing Sopranos-themed parties all over the world. Wherever he goes, though, even in Philadelphia, he’s calling it sauce. “You don’t call fucking crab sauce, crab gravy, you call it crab sauce!” he says. “Linguini and clam sauce isn’t linguini and clam gravy! Fucking idiots.”

The next person in the lineup of Sopranos sauce experts is Steve Schirripa, aka Bobby Baccalieri, who used to sell a line of “Uncle Steve’s Sauces.” Unfortunately, Schirripa declined to be interviewed for this, but that’s okay, he’s busy with his podcast — and maybe, hopefully, his model trains — so I can’t hold a grudge (especially since Bobby is one of my favorite Sopranos characters). Without his direct input though, I’m forced to infer his part in this debate: His jars were labeled “sauce,” just like Pastore’s and Gannascoli’s, but Schirripa’s company had also used the term “gravy” on occasion. That might imply indifference on the subject, but it may have more to do with how the sauce is used.

To explain a bit further, I’d like to turn to Louis Lombardi, who played Agent Skip Lipari on The Sopranos (yeah, a fed, but don’t hold that against him). He explains, “The true tradition was that ‘Sunday Gravy’ had all the meats in it: Your ribs, your sausages, your meatballs, your braciole, all of that simmers in there for five hours and that becomes the gravy. Sunday gravy is with the meats in it, but if you open a can of tomatoes, crush them with your hands, add two cloves of garlic, some basil, olive oil and simmer it with a little parmesan, that’s sauce.”

But Lombardi admits that even that isn’t so strict. Like Pastore, Lombardi grew up in the Bronx hearing “gravy” from his family and he says that “sometimes, even without the meat, people said gravy.” Still, when it came time for him to sell his own celebrity sauce as part of his Lombardi’s Foods line, he put “tomato sauce” on the label, just like the others. 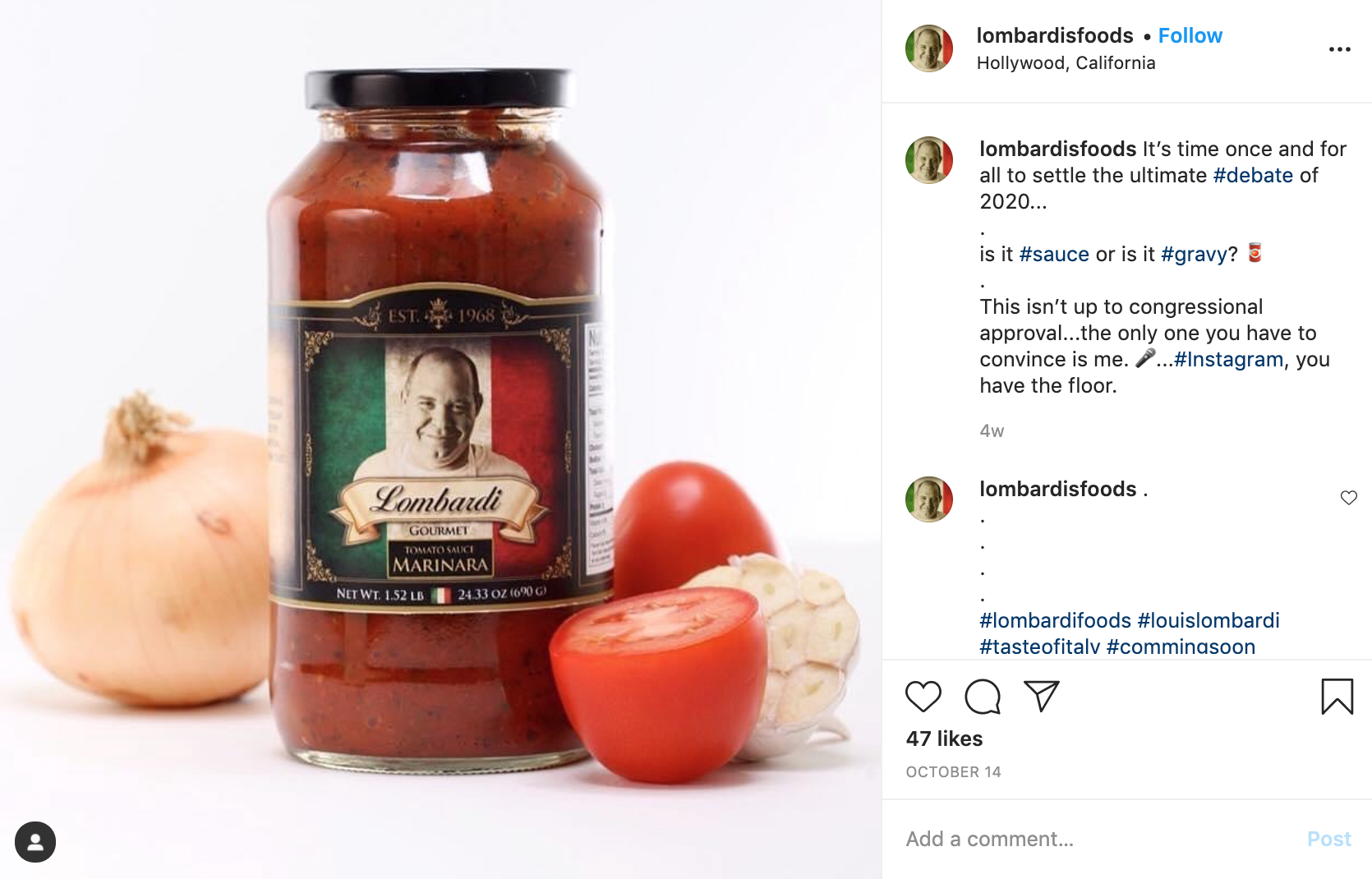 While it’s true that, as Lombardi and Gannascoli say, there is a regional element to this debate, when I did some of my own research, I found that there’s also a generational component. According to Matador Network, generations ago, some Italian immigrants adopted the word “gravy” as a means to assimilate to the American vocabulary. Over the years, “sauce” has become more common, so people have gradually switched, but some “gravy” die-hards are still trying to keep the tradition alive.

As for which one is “correct,” it seems that there may not be a solid answer. Though all of the Sopranos actors put “sauce” on their jars, none of them — not even Gannascoli — felt like the sauce vs. gravy debate was worth going to war over. Lombardi especially promotes a message of peace among Team Sauce and Team Gravy, insisting that there is room for both. “I’m politically correct,” Lombardi says. “I’m not fucking around in these times, bro. I don’t want to get hit in the head with a jar of sauce. My political stance is to not say ‘sauce’ or ‘gravy’ —  just eat the food and shut the fuck up.”