‘The saddest memes I’ve ever posted were after a bad breakup,’ Instagram’s @Sonny5ideUp tells us. ‘My dad even texted me to see if I was okay.’

In 2012, mononymous musician/meme-maker Sonny created an Instagram account, @Sonny5ideUp, with the sole intention of promoting his music. Within a few months, however, static-image memes were becoming more and more popular on the platform. So instead of writing lyrics about his anxiety and depression, he pivoted to making memes about them. “I like to think of making memes the same as when I write lyrics, but without a tune — they’re just a vehicle to work through anxiety, depression and that kind of stuff,” he tells me.

Today, he’s accumulated more than 1.2 million followers and runs @Sonny5ideUp (in addition to a few other accounts) as a full-time job. And while Sonny5ideUp isn’t the biggest meme account on Instagram, Sonny is definitely at the top of an emerging genre that focuses almost exclusively on anxiety and depression.

Needless to say, after seven years of translating his anxiety into memes and watching that translation resonate with millions of strangers, Sonny has learned a lot — from reconciling the need to keep posting despite the fact that nothing matters, to the paradox that is being a meme-account celebrity, to how to truly disconnect from the very engine that fuels his life (and bank account).

The saddest memes I’ve ever posted were after a bad breakup. My dad even texted me to see if I was okay. It was super nice, but I was like, “Dad, this is my job.” It is just work; I don’t take it that seriously. To my dad’s credit, I was writing the craziest shit during that period. Some of the memes didn’t resonate that much either. They were super dark and not even funny. It was just like, “Fuck!”

A successful post will elicit a feeling. It gets people to respond in some way. Like, “Yeah, this is how I feel. It sucks, but at least I’m not alone and it’s possible to laugh at.”

I can’t really speak for millennials as a whole, but I think we approach anxiety and depression with a sort of detached, ironic humor, which older generations don’t really get. We separate ourselves from it, and that freaks them out. 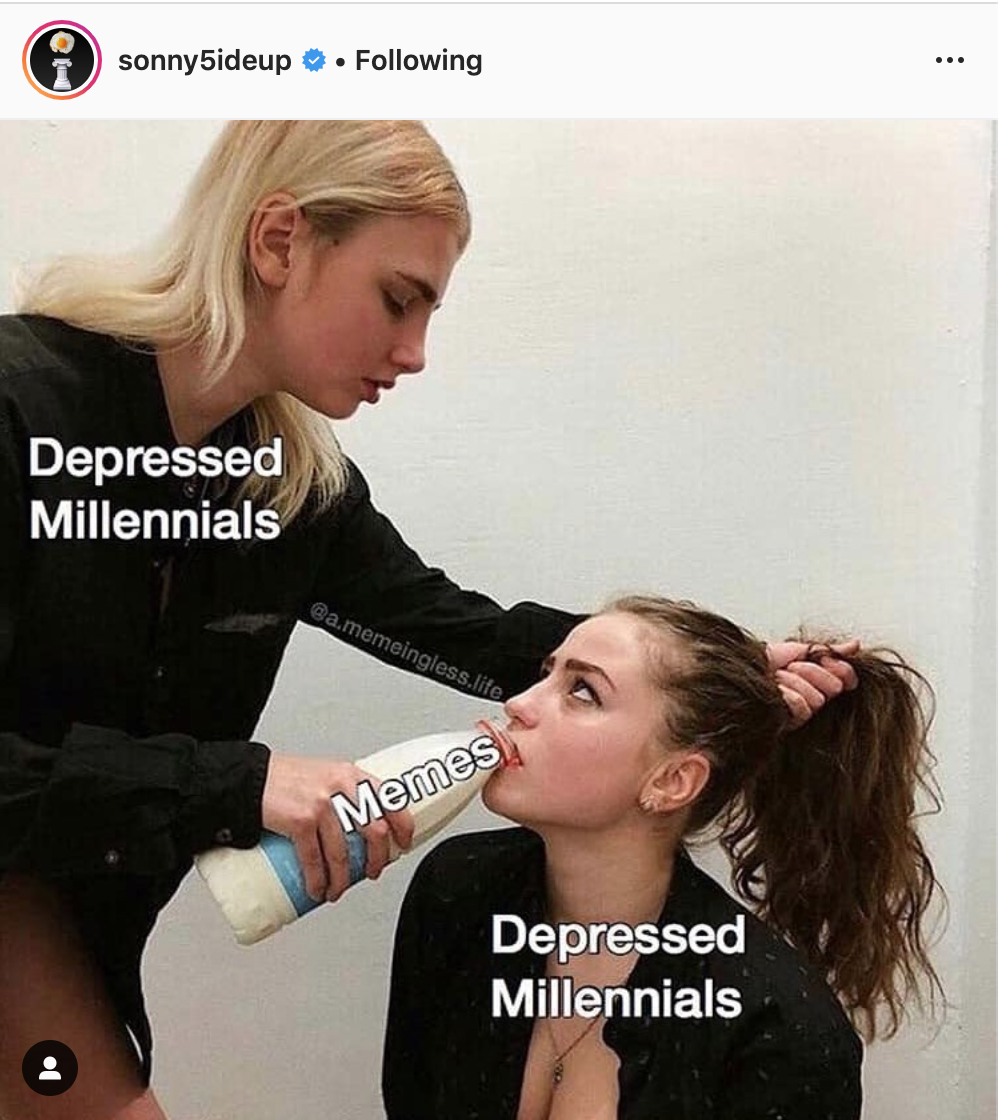 Sorry, I’m just taking a hit right now. I deal with anxiety by smoking weed 24/7. Actually, that’s how I deal with everything. It keeps me pretty chill, so it’s all good.

The first 20,000 followers wasn’t enough, I wanted a million. You’re always trying to get more. The bigger you get, the less satisfaction there is, but you still keep going.

It’s not about one post, it’s about fucking posting every day. If someone steals a post, fine. No one cares if you made it originally or if you didn’t. Nothing matters — except for the fact that you can’t dwell on the past. 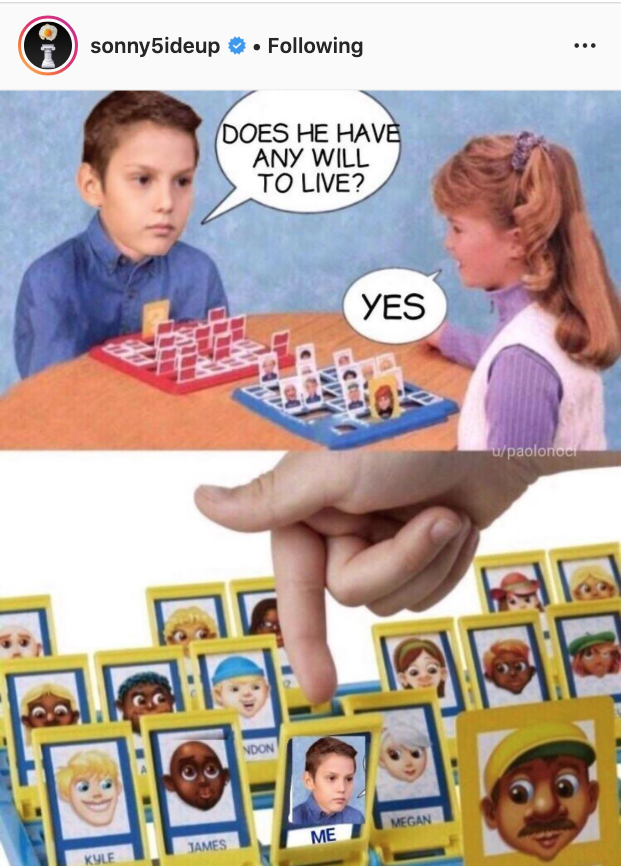 There’s no one for me to measure myself against. A musician can look at another artist and be like, “This guy did this, this and that.” But there aren’t that many people who do specifically what I do, so I’m on my own.

I don’t have the luxury of thinking about the future either. So I’m not thinking about where I’ll be in five years. Because who knows? Instagram could shut down tomorrow or delete my account. I can only think in terms of the day-by-day: get more ads, post more memes, get more money.

I stopped drinking coffee, and it changed my life. Now I buy a big iced coffee in the beginning of the week and put it in the fridge. I just like having it there. I’ll peek in to see if it’s still there and maybe have a sip, but any more than that, and I’ll be jittery and pissed off all day. 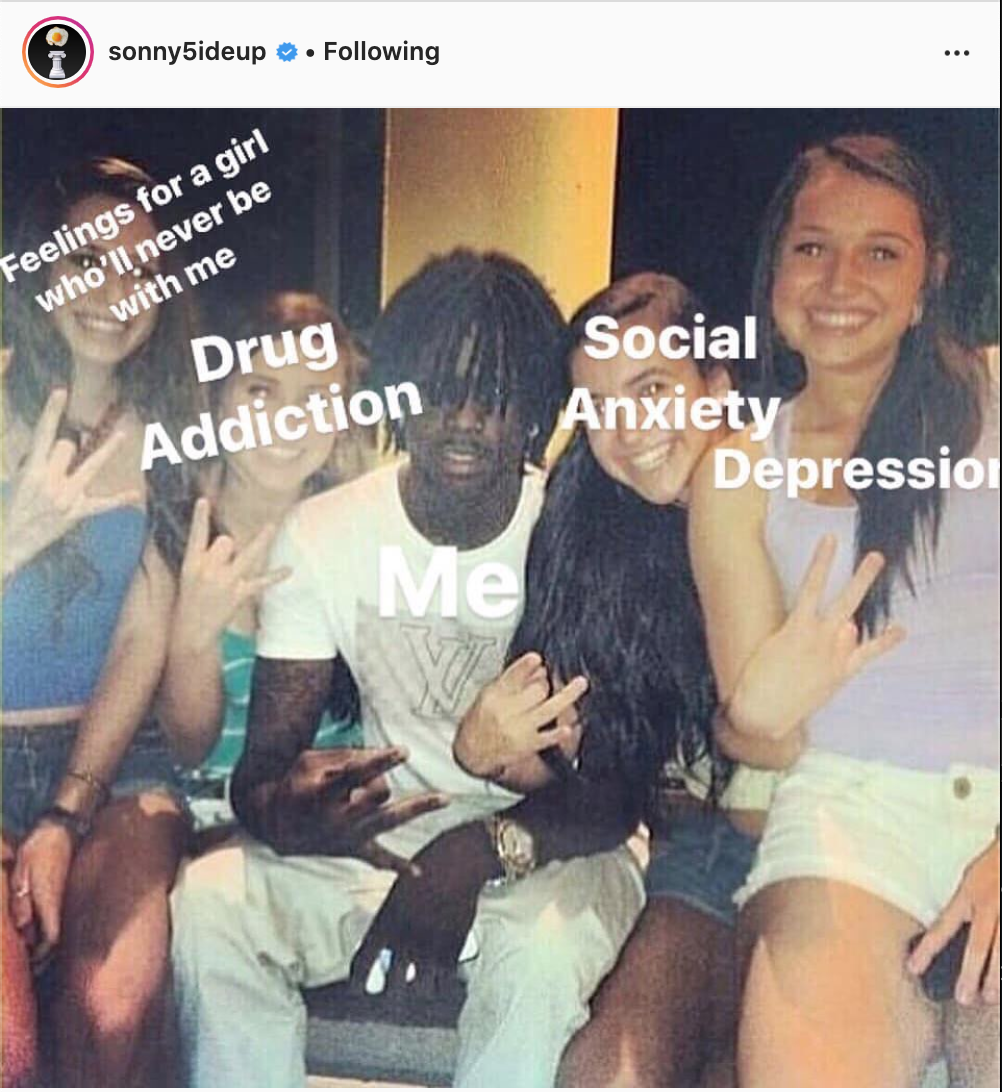 I also understand how girls feel now. The amount of unsolicited, “pay attention to me, goddamnit” DMs I get from men every day is insane. They think they deserve or expect me to post shit that they’re sending me.

Also, I’m not even cool. Why do you need recognition from me? It’s such a weird energy some dudes have.

I don’t want people to know anything about me. I had Famous Birthdays take down mine. Similarly, few people know what I look like. That said, whenever I’m in L.A., people will introduce me as “Sonny5ideUp, he’s got like a million followers.” People in L.A. really care about that shit. In New York, people are like, “Who gives a fuck?” I like that much better. 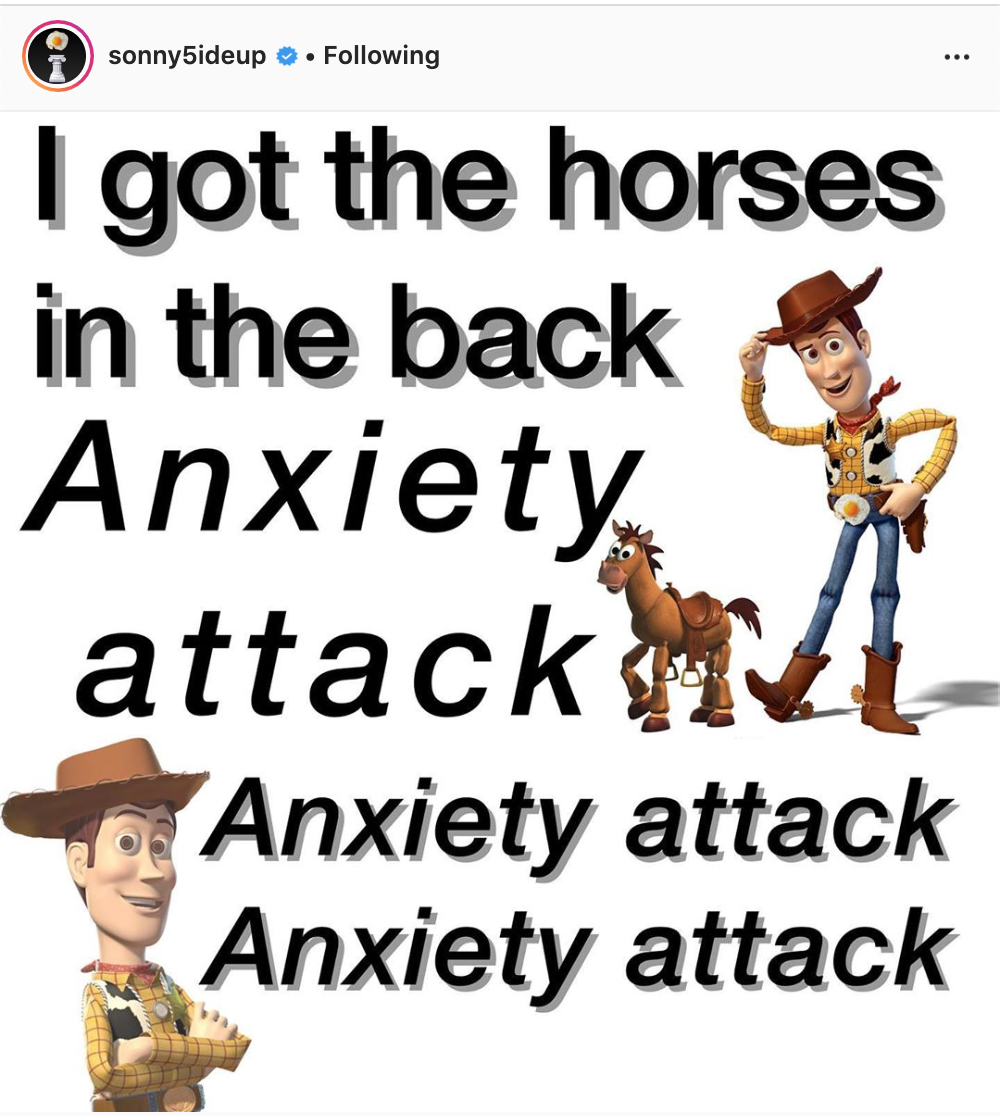 The only way to truly disconnect is to go for a trip. Specifically, a mushroom trip. That’s the only time I’m able to stop looking at my phone. When I’m on mushrooms, if I try to look at my phone or post on Instagram, it’s just like, “No!”

Is that weird? That’s really the only way I cannot be constantly thinking of ways to turn my thoughts or what I’m watching into posts. I only take like one gram — just enough for a little downtime to disconnect. I can tell you that it’s absolutely necessary.