And my skin is the shiniest it’s ever been

I don’t know what constitutes a skin-care regimen success story — I’m the sort of average guy who has fine enough skin, so it’s never occurred to me to use goop to improve it (save for that one time I went to a skin clinic to get a baby foreskin facial). But after a week of rubbing an ancient, grainy white paste onto my skin every night before bed, I’m inclined to believe that the Taoists may have been onto something.

In 2017, scholars led by Yimin Yang of Beijing’s Chinese Academy of Sciences were examining a 2,700-year-old nobleman’s tomb at the Liujiawa archaeological site in northern China, when they discovered a small bronze pot filled with yellow-white lumps. Using chemical analyses to examine the material inside the jar, the researchers identified the lumps as a type of face cream used by Chinese noblemen.

The findings provided one of the earliest examples of cosmetics production in China. The use of “Moonmilk” — a powdered form of the white stalactites found in limestone caves — mixed with animal fat suggests that the nearly $150 billion skin-care industry can, according to the study’s authors, track its origins back to the doctrines of “longevity, immortality and salvation,” as prescribed by the Taoists.

Followers of Taoism believed that stalactites found in limestone caves were “formed by the holy liquid from the souls of hills,” as noted by the study’s authors. “The Taoists were in favor of cave dwellings and would choose prestigious caves as a preferential place for Taoist rituals, since caves were considered metaphorically as the ‘womb’ that could give birth to neogenesis [regeneration of tissue] and palingenesis [rebirth],” write the study’s authors. All of which led these spiritual men to discover cave minerals, particularly white stalactites.

Now, I live in L.A. and I’m no spelunker, so stalactites in limestone caves weren’t in the cards. But I do have Google and a quick search told me that “Moon milk” can be purchased online for $14.69. The mostly Ayurvedic concoction consists of turmeric, cinnamon, Ashwagandha, ginger, cardamom and black pepper. It’s sold as part of an “ancient holistic practice of Ayurveda — an Eastern medical practice with roots in India — as a remedy for sleep deprivation and is usually consumed before bed,” per The Independent.

So I did just that. I bought myself some golden powder and mixed it with beef tallow that I purchased from the local Whole Foods as I fell into a fugue state. Why? Because the smell of my concoction smelled like the cream part of a Dunkaroos — my favorite childhood snack. 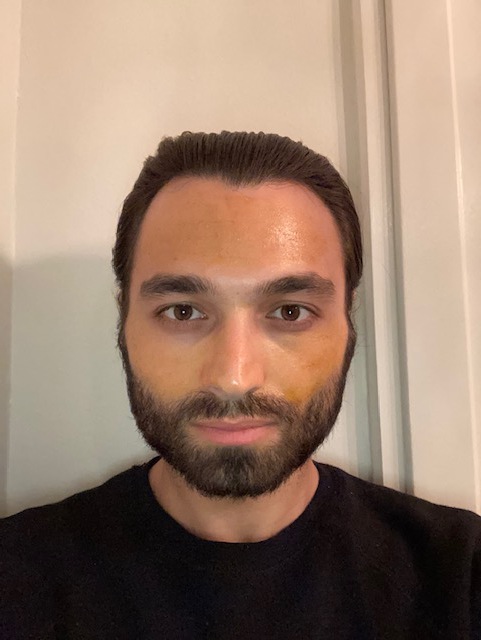 For five days I smeared this golden paste onto my skin and let it rest for a few hours before washing it off prior to falling asleep. I’d have let the viscous, oily paste stay on my face through the night, but if you know anything about turmeric, then you know that no amount of detergent can rid pillowcases of its yellow stain.

Things were going well. Really well. My skin felt plump and shiny. I could smell sweet Dunkaroo delight up until the moment I fell asleep. But even amidst the ecstasy, I couldn’t help wonder why the Moon milk I was working with was yellow, when the version the Taoists were using was described as white. Not to mention, one was from India and the other from China. Nonetheless, I assuaged my concern by telling myself that the yellow tint was merely a consequence of using the fugazi stalactite.

It was only when I sat down to write this story that I dug deeper into the potential moisture-infusing properties of stalactites, and it was then I became aware of the fact that there are, in fact, two different types of Moon milk — and I was using the wrong one. The Moonmilk found in the caves, drawn from limestone, is actually made of mostly calcium carbonate; the Moon milk I was using is essentially a delicious smoothie.

Still, I’m here to report that the Ayurvedic Moon milk (again, mainly used to help people sleep), when mixed with the beef tallow, did help my skin look shinier and feel plumper. This, I posited, was thanks to the beef fat.

Embarrassed, but determined to try out the right skin concoction, I purchased some calcium carbonate pills, crushed them up and mixed them with the beef tallow. To my disappointment, this time, the scent was more beef than Dunkaroo. The thick grainy texture however, was the same.

The pills I used are basically a calcium supplement — though most people get plenty in their normal diet, calcium is needed by the body for maintaining healthy bones and muscles. From a dermatological standpoint, calcium carbonate, according to the skin-care blog Humblebee and Me, also helps absorb “oil extremely well, so it can be found in cosmetics and skin-care products as an oil control/mattifying ingredient.”

To that end, Gregory Dylan, a facial and beauty expert, tells me that in the skin-care world, calcium carbonate is primarily used as an exfoliant and “has deep cleansing properties.” “It could have been used as a healing mask,” Dylan theorizes about the ancient concoction. “The beef fat makes sense because fat is full of lipids and would have functioned as an emollient.” All of which, he says, “would be a component of the earliest, most basic moisturizer and something to condition the surface of the skin and help prevent moisture from being lost.”

Which is exactly how my skin felt after a week of 2,700-year-old paste: conditioned. “Your skin looks good,” my girlfriend offered one morning after a week. And she was right — my skin, which is mostly clear but usually dry and full of nascent wrinkles was, well, less wrinkly and not dry. Sure, I would wake up in the mornings smelling like McDonald’s French fries. But as beauty regimens go, that seems like a small enough price to pay for eternal youth.