‘I don’t have money that I can put into savings; there isn’t enough left over. Any small emergency can bankrupt me. But I just have to keep trying my best.’

Thirty-two-year-old Nathaniel has been a single dad for six years. His 6-year-old son isn’t quite old enough to know why he can’t have new school supplies or clothes, which is probably a good thing, he says. If Nathaniel’s son knew what it meant to have only $25 to your name after bills and household expenses every week, he might be as nervous as his father.

“Forget actual taxes. The biggest tax is on my mental health,” Nathaniel tells me. “I don’t ever have money that I can put into savings; there isn’t enough left over. Any small emergency can bankrupt me, but I just have to keep trying my best for my child.”

Ever since becoming a father, Nathaniel has bounced around various minimum-wage jobs. He started as a security guard making under $10 an hour, before getting a job depositing money into ATMs for a dollar-per-hour more. Now he does maintenance work for a small business. “It’s a lot of basic manual labor: moving tables and chairs, setting up tents and such. But because I’ve been there for three years and I put in a lot of effort, my boss has been generous with giving me a dollar raise each year. And so, now I make $15 an hour.”

Needless to say, his weekly and monthly budget is tight: 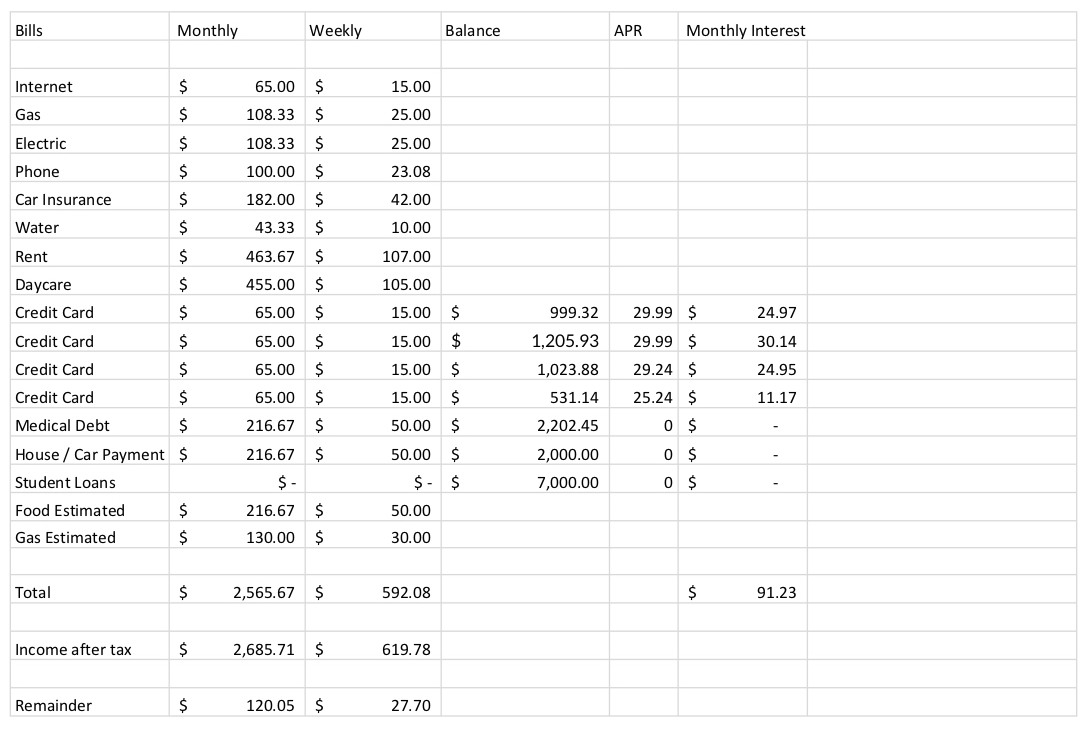 How, then, does he make ends meet with such a razor-thin margin for financial ruin? And more largely, what is life like when you’re a single dad and every last penny of your minimum-wage salary pretty much goes to the essentials (if you’re lucky enough for it to even stretch that far)? I talked to Nathaniel and two other dads like him to find out.

Because Kyle works in sales, sometimes he makes above minimum wage, sometimes he doesn’t. But he at least found a job that allows him to work from home, which he believes is crucial to raising his kids right. “I have two sons and a daughter, and I didn’t want them to be latchkey kids,” he explains. “Plus, I felt guilty having my older son babysit and not able to be a kid, so I made a point to find a job where I can work at home.”

“There’s nothing left over,” Kyle says, adding that on top of his day job, he does maintenance work for his elderly landlord in exchange for a break in rent, and mines cryptocurrency on two computers.

Still, he’s never sure how much money he’ll take in. “Since my budget fluctuates, we do a lot of overbuying during sales to prepare for leaner times,” he says. “In fact, if it’s not on sale, we don’t buy it. Food-wise, if it’s under a dollar a pound, we buy 10 pounds and divide it up in one-pound freezer portions like doomsday preppers. Sometimes those portions go in bags, but other times they go in aluminum foil or are frozen in water until we can afford bags.”

Kyle also started a small garden to supplement the vegetables he buys, but he admits, “I suck at it. That said, I’ll be Googling my ass off this winter to do better next year.”

Eating out is only reserved for birthdays — though “report cards are automatic ice cream” — and fast-food joints. “I have to plan this out,” he says, “but we’ll go and get fast food with coupons a month before birthdays, and fill out the surveys to get a free something next time we visit.”

“With ice cream,” he continues, “I try to enlighten the kids that they’re getting a two-scooper and not the car-sized banana split before we even go, to avoid coming off as Uncle Scrooge. Couple that with with only getting soda on the weekends, and it saves a ton on the kids’ dental bills.”

Otherwise, all meals are eaten at home, and carefully curated. “We went through a ‘wok everything except the dog’ stage,” he says. “Rice is key. When we get bored of that, it’s pasta everything. I try and stay away from Cup Noodles, but the kids love them. Whatever we’re cooking, it’s two vegetables and one meat. The rest of the bowl is rice, pasta or bread. Sometimes, I’ll just eat rice or bread so the kids can eat healthy.”

Grocery coupons are lifesavers, too. “Sometimes smaller grocery stores will blow out chicken for 50 cents a pound and beef for under $2 a pound,” he says. “If the local stores have a butcher, you can buy the ends of the deli meat cheap and put it on grilled cheese with tomato soup.”

When things have been particularly lean, Kyle has ended up at the food bank. “It was so embarrassing,” he says. “When I went with my middle son the first time, he was too young to remember, but I’ve told them all that we do it. Sometimes people need to get back on their feet.” To return the favor, Kyle adds that he likes to give back unused clothes and food when he’s able to.

“I try not to lie or sugarcoat anything about our financial situation to my kids,” he says. “I figure if I bust my ass for another 12 years, they can at least have a high school education. I think if they see me working hard and know it’s possible for them to work their way into a better life, it’ll turn into a learning experience.”

Upon the birth of his son, Nathaniel was buried in credit-card debt and behind on the payments of his car loan. He and his partner at the time had wanted the best for their son, so they splurged. “We thought we needed an expensive car for the kid because that’s what you do when you’re about to have a newborn — you want the best for them,” he explains. “But we were completely in the dark as to what we were doing and ended up overspending.”

One example was when his son needed a CT scan for stomach pains. At the time, they didn’t have insurance (today, they’re covered by Nathaniel’s employer), and the hospital visit cost them $3,500 — a bill they’re still paying off today. His son’s pains turned out to be just gas.

Soon Nathaniel and his ex broke up, and things “began to look really dire.” Nathaniel couldn’t afford rent on his own, nor could he afford the car loan on which he was rapidly falling even more behind. Then he caught a “lucky” break: His car was totaled after being rear-ended on his way to work. “My credit score was getting terrible fast, but after the car was totaled, insurance paid for it,” he says.

Financially, it was a win, but not having a car in rural Michigan wasn’t easy — especially when it was looking more and more like he was going to have nowhere to live. “I managed to get a small loan from a family member and bought a much cheaper ‘beater’ to get back and forth to work. Then I bought a ‘fixer-upper’ two-bedroom trailer,” Nathaniel says.

Through it all, though, Nathaniel, who in addition to his 48-hour work week and child-rearing responsibilities is seeking his associate degree in computer science, remains optimistic. “I’m in a better state than I’ve been over the past four or five years,” he tells me. “After some careful budgeting, I’m paying off all of my debts at the same time, which feels good. Well, except for my student loan debt, but that’s not due until I graduate.”

Jeff, a single father of three in Denver, spends his days driving Uber and nights working at a local nightclub. “I’m just paying the bills, not getting ahead,” he says. “But I know I’m securing a better future for my family.”

After dropping off his kids at school, he drives Uber until he hits his daily quota. “I originally set a goal of $300 a week, which was easy to obtain,” he explains. As such, he started driving more, in hopes of taking a chunk out of his mounting debt. “I bumped my quota up to $500 a week,” he says.

With full custody of his kids, this took some crafty scheduling. “Most of my driving is done while the kids are in school or on weekends when they’re at sleepovers,” he says. “But if they’re not at friends’ houses, which is often, I’ll get up at 4 a.m. to get my quota in before they wake up. My son, who’s 17, watches the girls when I do.”

“I was raising my children completely alone without child support and any other source of income, so the fear of not providing for them drives me,” he continues. “My weekly bills come to $700 per week and $200 per week for groceries. Everything else goes to retirement, the mortgage and fun money,” he says, crediting his budgetary foundations to the relatively controversial but very popular Dave Ramsey.

“My kids listen to Ramsey with me, so they know why I’m driving so much and working so hard,” he tells me. Still, he adds, “I’m not entirely sure they know I’m doing it all for them. But they will.”