We Tracked Our Sex Lives for a Year, and Now We’re Fucking Great

It’s not the sample size that matters, it’s how you use it

Three and a half years into their relationship, two college students felt the need to inject some better communication into their sex lives. It’s not that their sex was ever bad, per se, nor was their communication really lacking. There’s just always room for improvement. If anything, the couple — who we’ll call Josh and Sara — wanted to make sure that their sexual routine and intimacy “wouldn’t become something routine or boring.”

So, in January 2019, the couple began logging their sex life in a Google spreadsheet to get a close look at their spread sheets. A year later, they posted about it under the joint handle _ILoveThat_. Here’s how it went.

We both have the same attitude when it comes to sex and exploration. We’re open to trying almost anything at least once to see what we think about it. And since we’ve been together for a fair amount of time now, we’ve already tried a lot before this year. It wasn’t an effort to find deficiencies or make a statistical representation of someone’s dissatisfaction, although it could be used that way to great effect. We just felt that by logging everything — and including a comment section — it might open up our communication within the bedroom. 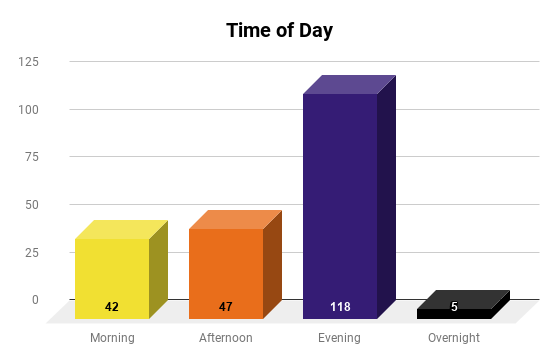 Everything we logged could be recounted hours and even days later, but we felt like tracking the time would take us out of the moment, considering we’d have to check the clock before and immediately after. Instead, a data point was anything sexual in nature.

On the spreadsheet itself, we set up our columns from left to right:

We included a comment section so we could expand on what we enjoyed during each session, things we found sexy or made us nervous, and what we enjoyed about the other person’s reactions. We found that seeing the experience through each other’s eyes, and reading things about what they liked, makes you look forward to being able to do it again, even if it’s physically strenuous or takes some prep or equipment for it.

Beyond what the numbers showed us from a larger trend perspective, the comments really allowed us to see each other’s perspective in the short term. Like, “This probably isn’t going to work for me, let’s try switching to doing something else,” or “I got a bit sore in this position but it’s kind of worth it if I’m in the right mood.” But the comments contain a lot of private information, so we left those out of the charts.

The data helped us keep intimacy from becoming something routine or boring, and encourage open communication around things we liked or didn’t like, or things we wanted to include more or try out. 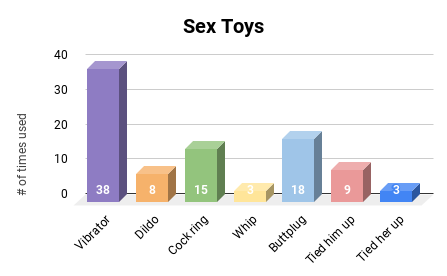 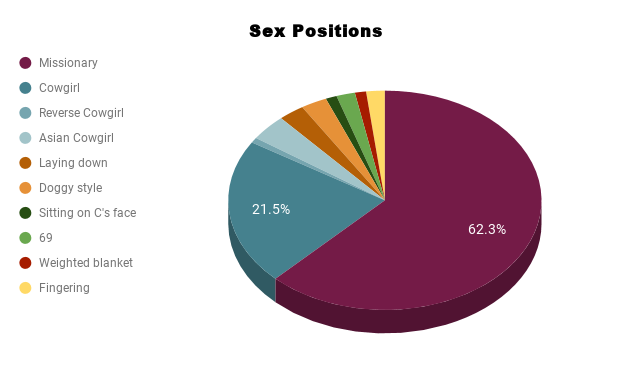 For example, we sort of stumbled into a position that we both liked. We called it the “weighted blanket” because we couldn’t find a name for it on Google. In this position, I’m the weighted blanket. So the guy lies down, and the girl starts by getting into the reverse cowgirl position, but then leans back until she’s almost stacked on top of him. It’s pretty comfortable and he has access to a lot of her in this position.

Overall, we had 220 sexual encounters logged with 200 of those being PIV [penis in vagina]. Sometimes we’d fill out the data a few minutes after while we were cuddling, since it’s much easier to log when it’s fresh in your mind. But most of the time we’d do log the following day, or sometimes up to a week later. 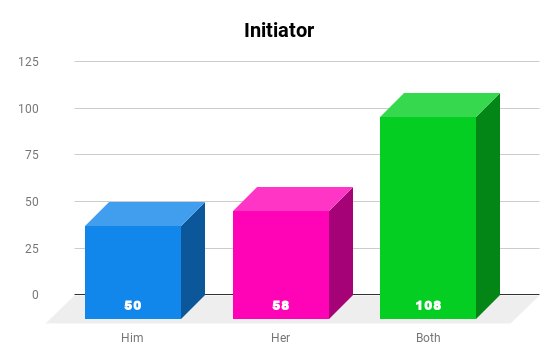 Logging who initiated sex was a great piece of data. Who initiates sex in a relationship can get real touchy and lead to resentment — but having hard data to reflect that would at least open communication for anyone struggling with that. However, upon looking at our data, we noticed that we really do initiate equally, and having compatible libidos is something that makes us feel lucky. Sometimes we’d even argue about who initiated, like “I gave you the look, I get the credit!” but ultimately decided it was a mutual initiation and logged it for each. 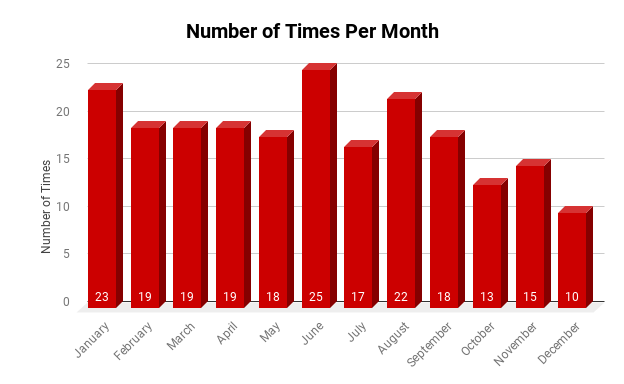 We also noticed that we have pretty consistent sex despite not living together, but it was affected by our school schedules. We typically see each other 4-5 days a week and often spend the night at each other’s place. But when we were really busy with school, or visiting our family for the holidays, those months dipped down. Of course, those numbers spiked quickly over the summer when we had time to see each other.

We noticed an “oral” discrepancy that we do want to work towards leveling, and in the new year we’re off to a good start. But it wasn’t as big a deal as people [on Reddit] seemed to be getting upset about. 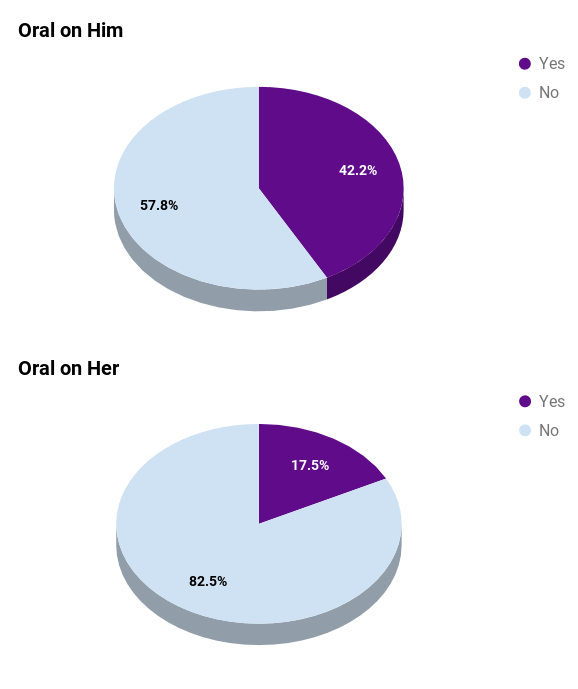 My ratio is bound to be lower because I don’t like to receive oral during my period, and I turn down oral when I’m not in the mood for it. Plus, I come the hardest from G-spot stimulation. I like harder pressure on my clit that oral isn’t typically able to give me. I know a lot of women need oral to come, so people found it shocking, but that doesn’t mean it’s every woman’s preference.

It was silly and fun and nerdy, but for us, looking at the data, it was evident what sex means in our relationship. It’s not a competition and it’s not just about coming. To us, sex is a way to feel intimate, to express our love, to reconnect after a fight, to explore new things, to enjoy each other’s bodies and to make each other feel good. So we’re excited to continue logging into 2020.