In ‘Ozark’ Season Three, Marital Issues Are Scarier Than the Cartel

This Netflix crime drama has always been about murderous drug lords and violent power plays. But this season, the real anxiety is whether Jason Bateman and Laura Linney’s feuding characters can keep their relationship afloat.

Marriage counselors will tell you that fights about taking out the trash or doing the dishes aren’t really about those menial chores. Rather, they speak to more ingrained conflicts between spouses — they touch on unresolved issues that usually have to do with feeling unappreciated or disrespected or not having your emotional needs met in the relationship. And if you don’t talk about those deeper issues, they’ll just get worse — especially if you’re both working for a violent Mexican drug cartel.

Season Three of Ozark continues the saga of Marty and Wendy Byrde (Jason Bateman and Laura Linney), a married couple from Chicago who had to move to the Ozarks with their teen children, Charlotte (Sofia Hublitz) and Jonah (Skylar Gaertner), after Marty’s business arrangement with the Navarro Cartel went sideways. Now operating a casino to help launder the cartel’s drug money, Marty and Wendy discover that their problems are far from over. Her ne’er-do-well brother Ben (Tom Pelphrey) comes to town, looking for a place to lay low, while FBI agent Maya Miller (Jessica Frances Dukes) is appointed to oversee the casino in the hopes of catching the Byrdes in the midst of their illegal activities. And the brilliant cartel lawyer Helen (Janet McTeer, excellent as always) has moved to the Ozarks to keep a closer eye on her boss’ investment.

Of course, that all means that we’ll be treated to the usual amount of life-or-death stakes and endless slow-burn tension. But in some ways, this season’s greatest source of anxiety comes from the fact that Marty and Wendy’s marriage simply doesn’t work anymore. On a micro level, that’s bad because of how it affects their home life and their kids. But over the course of these very enjoyable 10 new episodes, Ozark becomes an unexpectedly vivid illustration of how small marital disagreements speak to bigger relationship issues — and can have major consequences. The Byrdes have to stay a step ahead of the Feds, the Kansas City mob and Mexican crime lords, but so many of their woes are self-inflicted because they’ve lost the ability to communicate with one another.

Ozark is hardly the first peak-TV drama to pair domestic discord with high crimes. The Sopranos and Breaking Bad were both pretty eloquent on the topic, and certainly this Netflix series resides in those landmarks’ shadow. But despite some questionable plot points and a couple character arcs that I didn’t entirely buy, Season Three feels like a rebound after a so-so second season, mostly because the characters have largely given up the delusion that they’re the good guys. Instead, Marty and Wendy are just trying to plow forward, which proves increasingly difficult because they hate each other’s guts.

Early in the new season, the Byrdes begin seeing a relationship counselor, Sue (Marylouise Burke), to try repairing their bond. But therapy is tricky — partly because Marty and Wendy aren’t in a great place, and partly because (like Tony Soprano) they have to be careful what they say in session. Even as they talk around their problems, though — she wants to open another casino, he thinks they should keep a low profile — what’s clear is that their differences of opinion are built on older issues. In fact, those issues have always been at the heart of Ozark — but now that Wendy has grown more assertive and become more comfortable with their criminal lifestyle, her ambitions are butting up against her husband’s. And in Season Three, that’s going to be a problem.

When Ozark premiered in 2017, its big hook was that nice-guy Jason Bateman was showing off his Walter White side, playing a buttoned-down financial planner who, by the way, was working with a cartel, discovering his capacity for deception and immorality in the process. Yet what got overlooked at the time was just how good Bateman was at playing a smug know-it-all — essentially an evil version of Arrested Development’s long-suffering Michael Bluth — as he outsmarted all those around him, including his wife. If Walter White got off on the power that his Heisenberg persona bestowed upon him, Marty savors his shrewd, unflappable logic — it’s his superpower, allowing him to best his opponents. You can’t beat Marty — he prides himself on always being five moves ahead of you on the chessboard.

That arrogance has also been a shield, a way to keep him from getting hurt. (The first episode of the first season contained the revelation that Wendy had been cheating on him.) And as Wendy gains confidence in the family business — she’s as cutthroat a negotiator as he is — Marty’s position as breadwinner and protector will be threatened. He’s mad at her because she doesn’t listen to him about being prudent and cautious — he feels she doesn’t appreciate how much he cares about keeping them safe. And she’s mad at him because he doesn’t take her ideas seriously — she gets tired of his stubborn insistence that he knows what’s best.

These squabbles are the stuff of most couple’s fights — hurt feelings and simmering resentments — but in Ozark, they’re weaponized because of the danger waiting around every corner. Initially, it’s funny that Marty, perpetually obsessed with having control, is secretly bribing Sue so that she takes his side in their sessions. It’s less amusing, however, when Wendy independently hatches the same plan. It’s not simply that they both want to come out on top in therapy — they want their own vision for what to do with the business to reign supreme. So much of Ozark concerns the Byrdes figuring out how to navigate the mess they’re in, but it’s also about both of them needing to be heard in their contentious relationship. 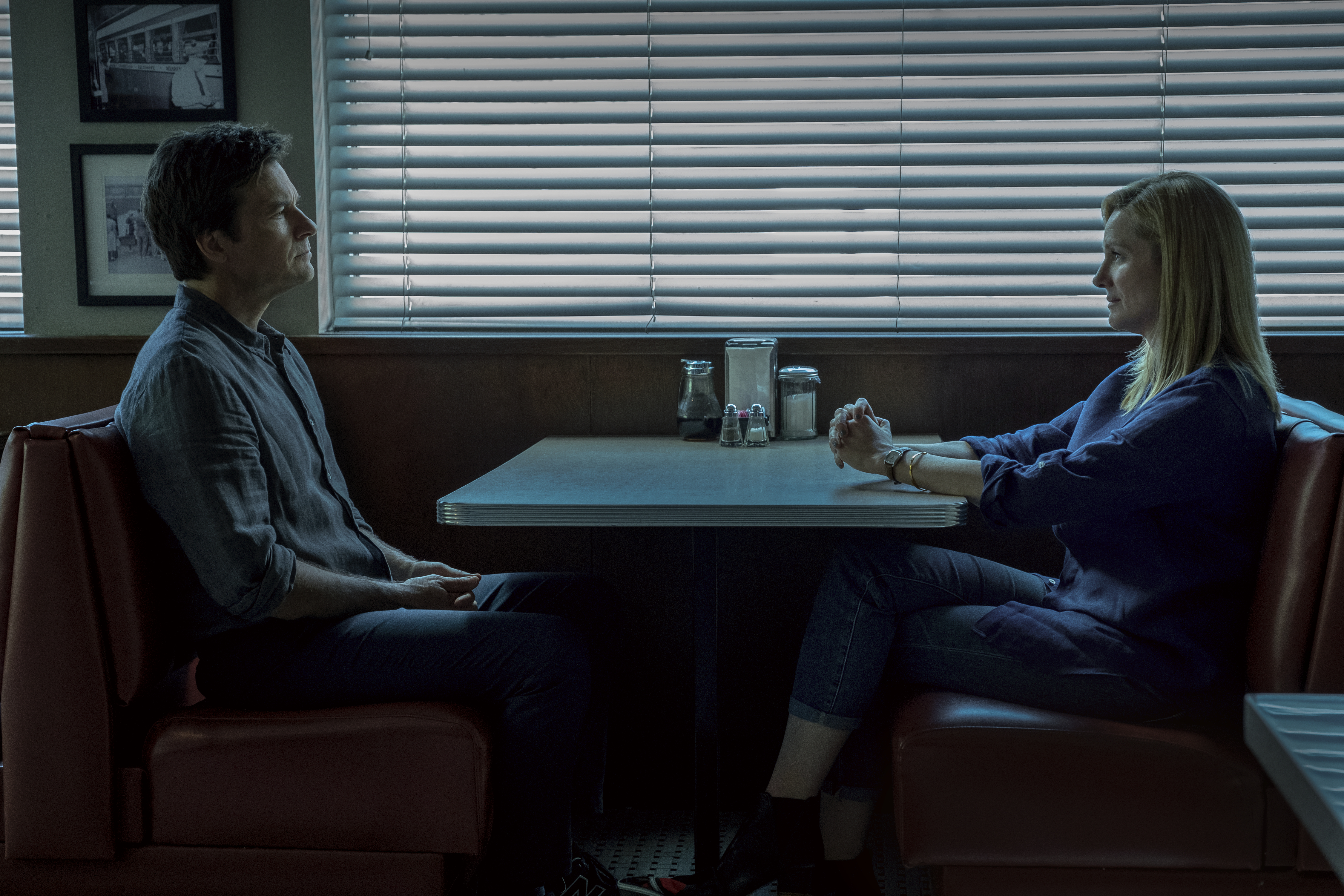 If Marty or Wendy pick the wrong course of action, their whole family could be killed. (As in the first two seasons, the body count is high in Season Three.) And there are no easy choices. Maya offers Marty a deal if he turns state’s evidence. Marty is convinced he can corrupt this federal agent, putting her on their side. Wendy thinks she has Navarro’s (Felix Solis) ear. Ben proves to be a handful. And all the while, Charlotte and Jonah are experiencing the typical adolescent anxieties that, on their own, are enough to keep parents up at night. It sure would be nice if Marty and Wendy were on the same page. But as Season Three moves along, they’re not even sleeping in the same bed.

Not that Ozark has suddenly morphed into a domestic melodrama. The show has lost none of its enthusiasm for juicy double-crosses, shocking violence or shifting loyalties — each episode feels like it could end in bloodshed. And the supporting cast is still a rich array of thorny individuals. Julia Garner remains excellent as Ruth, the tough-talking local who remains Marty’s ally — at least for now — and Lisa Emery continues to be utterly terrifying as Missouri drug kingpin Darlene.

Sometimes the show still pretends it’s about the horror of the Byrde family’s moral rot, as if it’s not already clear to them (and the audience) that there’s very little goodness left in them. But if the plot machinations and brooding, mournful tone can occasionally be overdone, what keeps Ozark compelling is watching Marty and Wendy go to war with each other without ever shooting a gun. They want to stay alive, but they’re each just as invested in obtaining the upper hand in their marriage. Despite it all, deep down I think these two still really love one another. But there’s no longer any trust — and without it, they may not live long enough to find out who ended up being right.