This Is Not the Fight You’re Looking For

The rising tension between Bernie and Warren camps is wildly premature

I am not an “objective” journalist. I say that not only because I am vehemently opinionated in everything I write, but to acknowledge an unattainable ideal; good reporters strive toward it knowing they will fall short. And just as I accept that reality, I know there is no perfect candidate for elected office. In the 2020 primary cycle I have given equally to Sen. Bernie Sanders and Sen. Elizabeth Warren — the viable presidential contenders I see as willing and able to enact progressive change. I would like them both in the race as long as possible, at least until there can be no doubt that they, not Joe Biden or Pete Buttigieg or some billionaire, represent the American future. I’m heartened by the grassroots group Democracy for America saying much the same: that “defeating the corporate wing of the Democratic Party” is the essential goal.

“We see two extremely powerful and talented candidates that are both running excellent campaigns,” DFA Executive Director Charles Chamberlain told The Intercept, noting their considerable alignment on issues of health care, climate and wealth inequality. This has been reflected in the debates, where Sanders and Warren operate as a tag team to blunt the effect of sleazy centrist rhetoric from other corners. You may prefer one of them, but even then, the other is probably your second choice.

We can speculate about how their administrations would fare, and what they’d accomplish, but speculation is what it is — as dependent on your intuitive sense of each person as it is on close scrutiny of their records. There is cause to be skeptical of either’s effectiveness in the White House because, again, there is no such thing as a flawless candidate, and certainty of success is never justified. But loyalists have worked overtime to privilege the “gut” faith in their favorite, without which you might reasonably conclude that the potential differences between a Bernie or Liz presidency are pretty minor, or virtually moot.

Unfortunately, a lot of that esoteric debate is filtered through the dirty lens of 2016, a year that shattered trust on all sides. That’s how we wound up analyzing a video of Warren awkwardly dancing as if it held any clue whatsoever to her abilities as a leader. The “inauthentic” charge is, in truth, borrowed from the more relevant suspicion among some Bernie-or-bust folks that Warren is misrepresenting her politics and won’t fight according to the populist principles that make up her platform.

This argument, too, requires an amount of weird psychic energy — one must decide that Warren is fundamentally ironic in whatever promise she makes — but at least it gestures at policy. Attacking her on the basis of physical presence is a direct return to the mockery of Hillary Clinton’s admittedly stilted performance of spontaneity and fun in the last election. It’s a not-so-subtle way of calling Warren a barely improved update of the woman who blew it four years ago. Shoehorning Warren into 2016-vintage meme formats is a similar move. 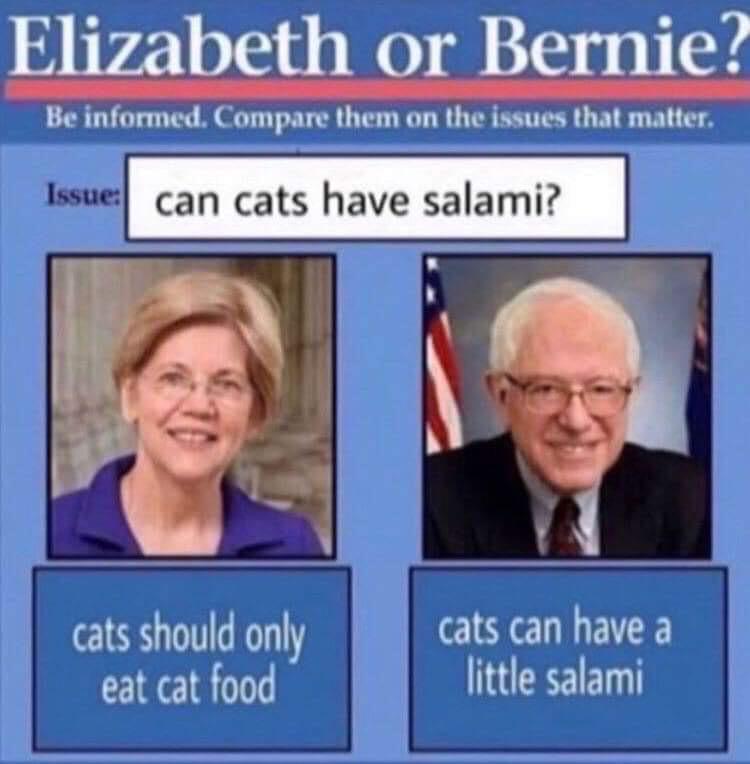 If it seems redundant to point out that Warren is not Clinton, then it would also seem silly to fret that Warren figures as Hillary 2.0 in a handful of shitposts. After all, it’s hard to envision a voter swayed to Bernie’s side by a joke about cats and salami, and the Iowa caucuses will be decided by people not totally immersed in the day-to-day skirmishes of the online left — the constant punching over purity, that is. People who are likelier to have watched Warren on The View than read the socialist critiques of her comments on Twitter. Only a quarter of Americans can identify Iran on a map; will Bernie supporters condemning the thrust of Warren’s statement on the U.S. airstrike that killed Gen. Qassim Soleimani have any impact on an electorate that doesn’t care to understand the region?

Yet this broader indifference is what makes the ambient, casual and disingenuous identification of Warren as another Hillary so noxious — for if it becomes the reflexive line, then it gets into the groundwater of the 2020 narrative right before most of the country starts paying attention. Meanwhile, Biden and Buttigieg continue to poll well despite their own miserable responses to the latest crisis. It’s almost as though a contingent of progressives are so incensed by the former Hillary boosters who went with Warren this time around that they’ve focused their fire in that direction as Uncle Joe bumbles his way to victory. On the flip side, certain Warren voters harbor a deep, long-standing grudge against the Bernie camp that blinds them to legitimate spotlighting of their candidate’s weaknesses.

The primary process delivers just one winner, of course, and the fair assumption that Warren and Sanders compete in overlapping areas of the Democratic base means the instinct to pit them against each other is basically irresistible. We do ourselves a terrible disservice, though, if we give this healthy dynamic over to old and consuming resentments. For one, that erases the real, illuminating benefit of teasing out the finer variance between the senators. Worse, it obscures true enemies, who are then free to consolidate the power and reach gifted to them as establishment sellouts. Maybe a Sanders-Warren or Warren-Sanders ticket is already off the table. Still, there’s hope in remembering their overwhelming commonality, which may allow one to help the other defeat Trump in November.

Cynicism is natural — but it’s not what makes a movement.