How to Fuck Safely When You Have a Latex Allergy

Wearing a condom is one of the simplest ways to prevent pregnancy and sexually transmitted diseases — unless you have a latex allergy, in which case it’s the simplest way to make your dick feel like it’s been dipped in hot wax.

But even you — with your pesky latex allergy —  can engage in safe sex by simply using non-latex condoms. In fact, there are three major condom materials that several (s)experts recommend…

While natural latex is made from the rubber tree — and many people with so-called latex allergies are actually allergic to the plant proteins found in that tree — polyisoprene is a latex alternative made in a laboratory, minus those troublesome proteins. Because polyisoprene stretches and feels almost exactly like natural latex, several condom manufacturers have started marketing polyisoprene condoms to those who wilt at the mere sight of the real thing.

“My favorite is a product called Skyn by LifeStyles,” says Ela Darling, adult film performer and chief marketing officer of the pornographic website PVR.fun. (Darling is latex intolerant, which is less extreme than a full-blown latex allergy, but still makes using latex condoms extremely painful.) “They’re the best in terms of sensation.” Darling also warns that polyisoprene condoms should only be used with water- and silicone-based lubricants, since oil-based lubricants can break down the polyisoprene and increase the risk of breakage.

There is one downside to polyisoprene, though: “Because polyisoprene is new and scarce, polyisoprene condoms are often a costly condom alternative,” says clinical sexologist and certified sex coach Sunny Rodgers. That said, Skyn by LifeStyles seems to be pretty cheap at Target (only $6.19 for 12 condoms).

Polyurethane — a type of thin, clear plastic — is another popular latex alternative. Darling specifically mentions that Trojan sells a brand of Supra condoms, which are made from medical-grade polyurethane, adding that unlike polyisoprene condoms, polyurethane condoms can be used with oil-based lubricants. 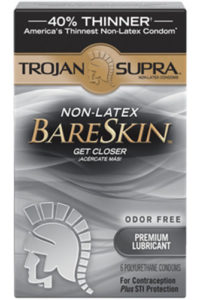 On another positive note, Rodgers says that even people without latex allergies might prefer polyurethane condoms. “Many people find polyurethane condoms preferable to latex, since they’re thinner, which allows stimulating sensations and body heat to be better felt,” she says.

Despite their name, lambskin condoms aren’t made from lambskin — they’re made from a thin layer of lamb intestine, and as we previously wrote, they tend to have a more natural feel than polyisoprene and polyurethane condoms.

Lambskin condoms, however, have one major downside: “I don’t recommend these for sex play with new partners, because the intestine material used to make these condoms is permeable and could allow sexually transmitted viruses to be shared,” Rodgers explains. Darling seconds this notion: “Honestly, with the advent of the aforementioned synthetic condom options, these are pretty low on the list of things I’d recommend, and I only mention them in case none of the other options are viable.” 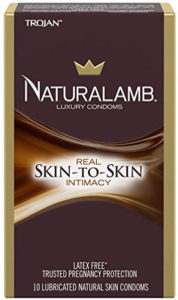 Another drawback to using lambskin condoms is that they tend to be pretty expensive: Ten lambskin condoms by Trojan cost about $25 on Amazon, whereas 36 latex condoms from the same company cost only $14.

Now that you have some non-latex condom options, let’s take this one step further. “Condoms aren’t the only thing to consider when having latex-free safe sex,” Darling says. “It’s common for couples, especially queer couples, to incorporate gloves into their lovemaking, and for this, I recommend nitrile gloves [as opposed to latex]. You can get a box of 100 for about $10, and they come in different colors — the black ones are sleek and sexy. These are also safe to use with water, silicone and oil-based lubes.” 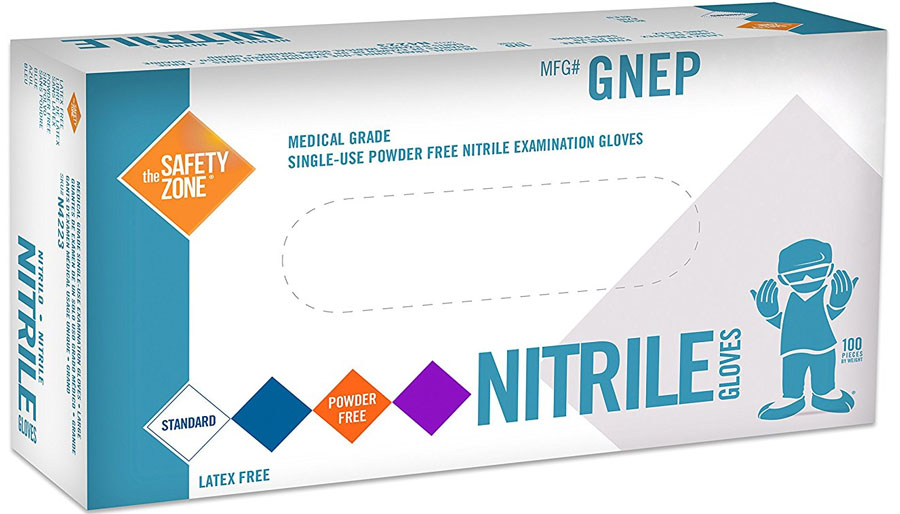 And if you’re into fetish clothing — like latex bodysuits — Darling recommends clothes made of polyvinyl chloride (also known as vinyl). “You can get a high glossy shine with this material, and the inside tends to be fabric, so you don’t have to cover your body in silicone lube to get dressed,” she says.