Husky Guys Spill Their Guts About the Stigma of Running Shirtless

‘You are exposing yourself to the world as way of saying, I am not where I want to be, but I am working extremely hard to get there’

No matter how many Reddit threads, blog posts and articles about “not caring what other people think,” Alec couldn’t get himself to try running shirtless in real life.

The 21-year-old’s weight left him too self-conscious to doff the top when he jogged, even when it was hot as hell in his home state of Pennsylvania. “I jiggle when I run,” he confesses. “I already get nervous about taking my shirt off when I’m not running.”

But then, during a run on a particularly hot summer day, he hit a wall.

It was a terrible run. He was making good time, but it started pouring, and he quickly got drenched. “I was miserable, slow and about to stop, but I was still three miles away from my car, and my phone was getting wet,” he says.

So, he thought, Fuck it. He ripped off his shirt and wrapped his phone in it. It felt goddamn liberating: “The rain felt so refreshing, I felt so much less sludgy and it pumped me up to keep trying.”

Alec’s got a rule now. He takes his shirt off exactly halfway through his runs as a motivation technique and midway refresher. It doesn’t just help him run faster, though: “It helps to think, like, ‘This is what a runner looks like, folks. Take it in.’”

Like Alec, male runners all over are torn when it comes to running shirtless — especially when they don’t look like a model on the cover of Men’s Health. It’s a popular opinion that guys who aren’t rail-thin need to cover it up or else passersby will recoil in disgust. CNN’s politics-for-idiots correspondent Chris Cillizza is a known antagonist of shirtless runners, tweeting multiple times about how only “ripped” guys have earned the right to stay cool.

The subreddit r/running is littered with posts such as “I’m a chubby guy who runs shirtless. Is that okay or does it gross people out?” and “How fat is too fat to run a road race shirtless?” Even though most of the comments are supportive, the stigma persists. It’s the fear of even a single comment in that thread looking down on him for showing skin that causes Alec to keep his shirt on… or not run at all.

To see what helped Alec overcome his fear of running shirtless, I talked to him and a few other shirtless-and-proud runners about what it’s like to run shirtless when the weight they’re shredding is on full display. 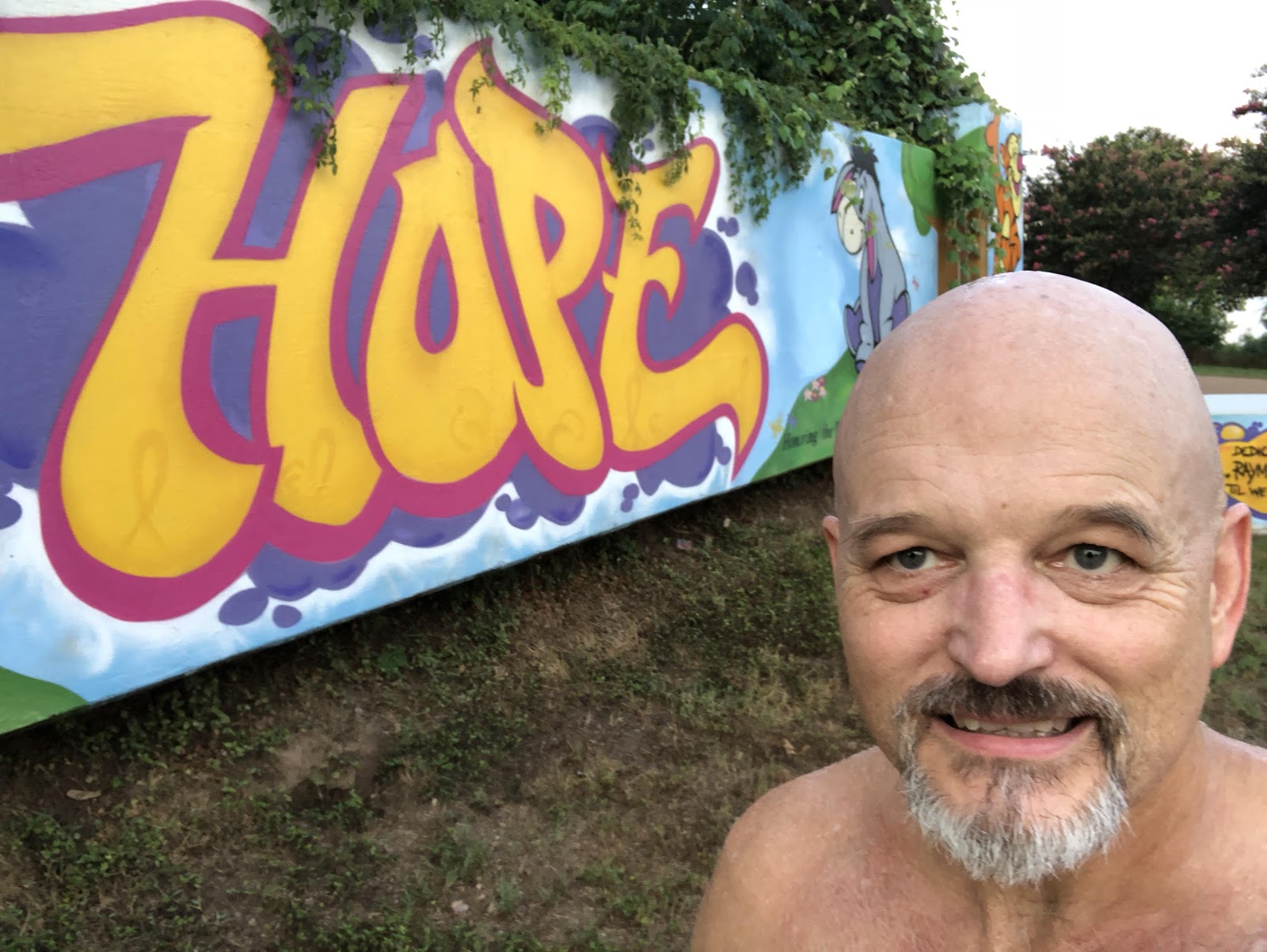 I’m 6-foot-0 and 205. Avid [runner] since about 19. I’ve never quite achieved the “ripped” body you’d expect from a guy who runs shirtless. And living in Texas this entire time, I’ve run shirtless pretty much anytime the temperature is above 55 degrees. Honestly, 99.9 percent of the time when I run, people pay me no attention or, at most, give a friendly wave regardless of what I’m wearing.

I grew up in the country in Texas, so I spent most of my childhood summers shirtless, so it honestly never occurred to me to be self-conscious about being shirtless. I also had no problem being naked on the clothing optional beach when we lived in Germany, even though I discovered that I was pretty much the only circumcised guy there. We all have the same body parts, even if they look a little different on each of us. It just seems silly to me to worry about my particular differences.

I used to work in a multi-company office building that had a small gym. I would run on the treadmill shirtless. At the time, I had literally never worked out in a gym before, so I didn’t know that it was not kosher to run shirtless. One day, while I was on the treadmill, the security guard walked through the gym. I waved to her and didn’t think anything of it. The next day I got an awkward email from my company’s facilities manager asking me to review the dress code for the shared gym. I replied to his email explaining what had happened and that I was sorry he had to deal with the ramifications of my “flapping man boobs.” From that point on, my co-workers jokingly referred to my flapping man boobs at every opportunity.

So I say to anyone else with flappy man boobs like me: Just go for it! People care about your looks much less than you imagine they do. Running shirtless is worth it for the cooling and sense of freedom.

When I was overweight, I would typically take my shirt off mid-run after working up a good sweat. I saw it as a way to motivate me to continue trying to get in better shape because I knew that my physique was nowhere close to where I wanted it.

Running without a shirt on can be quite motivating. Obviously, in order to get in great shape, you have to stay consistent with your workouts and keep your nutrition on point.

I doubt many people cared. It’s fairly common to see overweight men running shirtless. But in my mind, I used it as extra motivation in order to push myself toward the physique that I desired.

Looking in the mirror and not liking what you see — to me, that’s enough motivation to keep working harder. You are exposing yourself to the world as a way of saying, “I am not where I want to be, but I am working extremely hard to get there.”

I know most people aren’t giving me a second glance, and the ones who are are likely never gonna see me again. But if someone looks at me and I can tell it makes them uncomfortable, so be it. It gives me more motivation to run.

I think other people should be more comfortable running shirtless because I feel like there’s a stereotype of social/hobby runners being these super-fit, handsome guys who jog to pass the time between business deals.

The guys who don’t fit this stereotype wear loose shirts and long shorts and we don’t really notice them. The more we notice average-Joes running, the more people might feel comfortable running. Also, you go faster and it feels better.

I used to weigh over 300 pounds. After I got into running, I dropped 80 pounds.

I stick to running shirtless because it gets hot and my nipples chafe. A lot of overweight people are already conscious about looks, especially when you get jackasses humble-bragging and putting us down. That attitude is what keeps some people on the couch and is just shitty in general. I’m not running to win a beauty contest. I run for the exercise and the way it makes me feel when I’m done. And I could care less if you aren’t impressed by my body. As a hairy fat guy, [I say] anyone who judges runners can go fuck themselves.

I’ve been running for the past few years and lost 11 pounds doing so. I live in the Midwest, so during the summer I run shirtless whenever I can. I am a little self conscious when running shirtless in public, but ultimately I’ve come to the realization that nobody cares enough to say anything to me about it to my face.

I have had people hollering at me. It’s always guys from cars. Some honk, some will yell expletives… but I like the attention, honestly. It’s never really bothered me. If anything, running without a shirt just gets me running faster.

I was self-conscious about running shirtless until I saw a post from an overweight girl who talked about being really self-conscious about how she looked running. In my head, my counter to that was, “Don’t underestimate what you are doing. I can smash out 10 km anytime I want — it’s not an achievement, no one cares. You have to drag your ass out to get 3 km and it near kills you. And you STILL GET OUT THERE AND DO IT!” After that, I realized the same could be said for me, so I stopped caring. And that takes an insane amount of strength and heart, which is hard. Don’t ever forget how tough you have to be to do that.