They either ran it by mistake or thought they could do it with ease. Spoiler: They couldn’t.

On November 17, 2013, Annaliese Place found herself on the Las Vegas Strip, waiting for the All-American Rejects to take the stage. She had flown in from Massachusetts with her daughter and sister, both marathon runners who’d spent the previous few months training to run the Las Vegas Rock ‘n’ Roll Marathon later that night. Place, however, only tagged along to see her favorite band, and potentially, make her way through the race’s 5K for a chance at a $5,000 raffle.

“Before the concert started, they called for the 5K runners to start lining up, but I refused. I love the All-American Rejects, and I wasn’t going to give up being front row for the show,” Place tells me. “It was amazing. I felt like I’d been personally serenaded to ‘Dirty Little Secret’ and that my night was complete!”

“Except it was far from over,” she continues, “because I ended up running the marathon by mistake.”

With zero training, Place made her way through all 26.2 miles. After crossing the finish line, she not only entered into the elite company of people who have run a marathon in the first place, but the even smaller group of those who have done so without any prior training — a seemingly impossible and very painful feat.

As such, I asked Place and a few others who have raw-dogged a marathon why, exactly, they would subject themselves to such torture.

‘For weeks afterward, I had bruised toes’

Annaliese Place, Fitchburg, Massachusetts: When the concert wrapped up, I was happy to call it a night, but my daughter and sister insisted I should jump into the 5k late, so I did. As I started running the path, though, I quickly realized that I was ALONE… RUNNING DOWN THE LAS VEGAS STRIP!

It was like some kind of movie scene, but also, it was bad. My fitness level is average at best — I’m not a runner and definitely more guilty of going to get a drink after work over the gym. I wasn’t prepared, even for the 5K, but at this point, people were lining up along the marathon route and started cheering me on. I couldn’t stop.

Eventually, the streets were lined with screaming people showing support with signs to keep going, so I just kept running. By the time I got to the 5K line, I was exhausted, but my daughter and sister, who were running the marathon, caught up to me. I figured I’d continue on with them for a little bit. In my mind, I was already thinking that I needed to find a way out of this, but there were so many people lining the streets that there was no chance of quitting.

I had no real concept of how far I was going. I honestly didn’t think I was going to finish, but my sister and daughter assured me there were rock bands every few miles, which kept me going. But then there was a dark part of the race, away from all the lights on the Strip. I recall just wanting, needing to get back to the lights.

Ultimately, I somehow ran, walked and almost crawled to the finish line. When we finished, we were wrapped in silver foil and went into the Cosmopolitan Hotel bar and got a bottle to celebrate the victory. We were the only women dressed in silver foil that night, but we were welcomed in the very best way.

That night and into the next day, I sat in the jacuzzi tub in our suite for hours. We had to get late checkout because I had some real issues with cramping in my calves and could hardly walk. The plane ride home was unbearable, and for weeks afterward, I had bruised toes. Needless to say, it wasn’t the smartest idea I’ve ever had… but I’ve also done worse things in Vegas.

‘There was vomiting — lots and lots of vomiting’

Philip Ash, Falls Church, Virginia: It was 1996. I was young and, evidently, foolish. My friends and I had a running joke — pun wasn’t intended but I’m keeping it! — that went something like, “Yeah, run the marathon, why don’t you?!?!” I can’t remember where it started, but it became as blasé and frequent as the “That’s what she said” retort.

Anyway, that turned into a prank of my friends signing me up for the Washington’s Birthday Marathon, otherwise known as the D.C. Marathon, without my knowledge. My form of exercise throughout college was running because it was free, filled with fresh air and a great way to meditate. I didn’t run everyday though, and I wouldn’t have considered myself a proper runner.

Still, the day came that my friends alerted me of their hilarious prank, and for the sheer bravado of following through, I figured, why not? I had energy to burn and thought it would be a cinch.

Here’s what I remember most from that day, though — vomiting, lots and lots of vomiting. But it also ignited in me a fervent desire to complete another marathon — this time with the requisite amount of training — and now I regard myself as a triathlete and marathoner.

Ash Depass, Vancouver Island, Canada: I’m an eternal optimist and tend to think I can do anything and everything. So when someone mentioned the Vancouver Marathon to me, I was like, “Where do I sign up?”

Luckily, I didn’t have to qualify to run this marathon, but I did sign up a few weeks beforehand, excited to prove that you didn’t have to train to run a marathon. In fact, it didn’t really matter to me how far out the race was, I just needed to know when and where — and how much pasta I could eat the night before.

The problem was, I actually had Thai food instead, which was a bad idea. It gave me an immediate stomach ache, and I had trouble sleeping. I felt bloated and heavy when I woke up and crampy when I started running. So it wasn’t the best way to start a race, but it faded into the background after a while.

The cool thing about races is that the energy of the people around you keeps you going, and there are people all over the city cheering you along. It’s super motivating and empowering. I also had an amazing playlist, so after a while, my body sort of moved on its own.

The other bonus is that this run is incredibly beautiful, most of it is through Stanley Park and along the seawall, so you have a view of the ocean, mountains and trees for a huge part of the race. On the other hand, it was POURING rain the whole time.

I felt great immediately afterward, but my first mistake was celebrating with several beers. I ended up sleeping until 5 p.m. the next day, and my body felt like one giant bruise for at least another three or four days. Luckily, I didn’t pull anything or do any serious damage. I think I ran slow enough to avoid any injury — my time was five hours or something ridiculous like that.

Pat Lynch, New York City: Like many of us, life as I knew it came to a full stop in spring 2020. I felt like I was losing grip of who I was and what I wanted to be. Most of my personal and professional goals became obsolete overnight, and I began leaning into the feeling of helplessness. In my eyes, time was running out. That’s when it hit me — if time’s going to run out, I might as well go with it. To that end, I revisited a bucket list item of mine to run the New York City Marathon.

I knew the location wouldn’t be possible this year, but I figured I could still run the distance around my neighborhood. I made the decision on a Thursday, bought some Gatorade on Friday and ran 26.2 miles on Saturday. Without cheering crowds to motivate me to keep going, I stayed motivated by the sunrise. By starting around 5:15 a.m., it felt like I was running toward the light with each mile, and knowing that there would be a nice sunrise waiting for me when I finished. 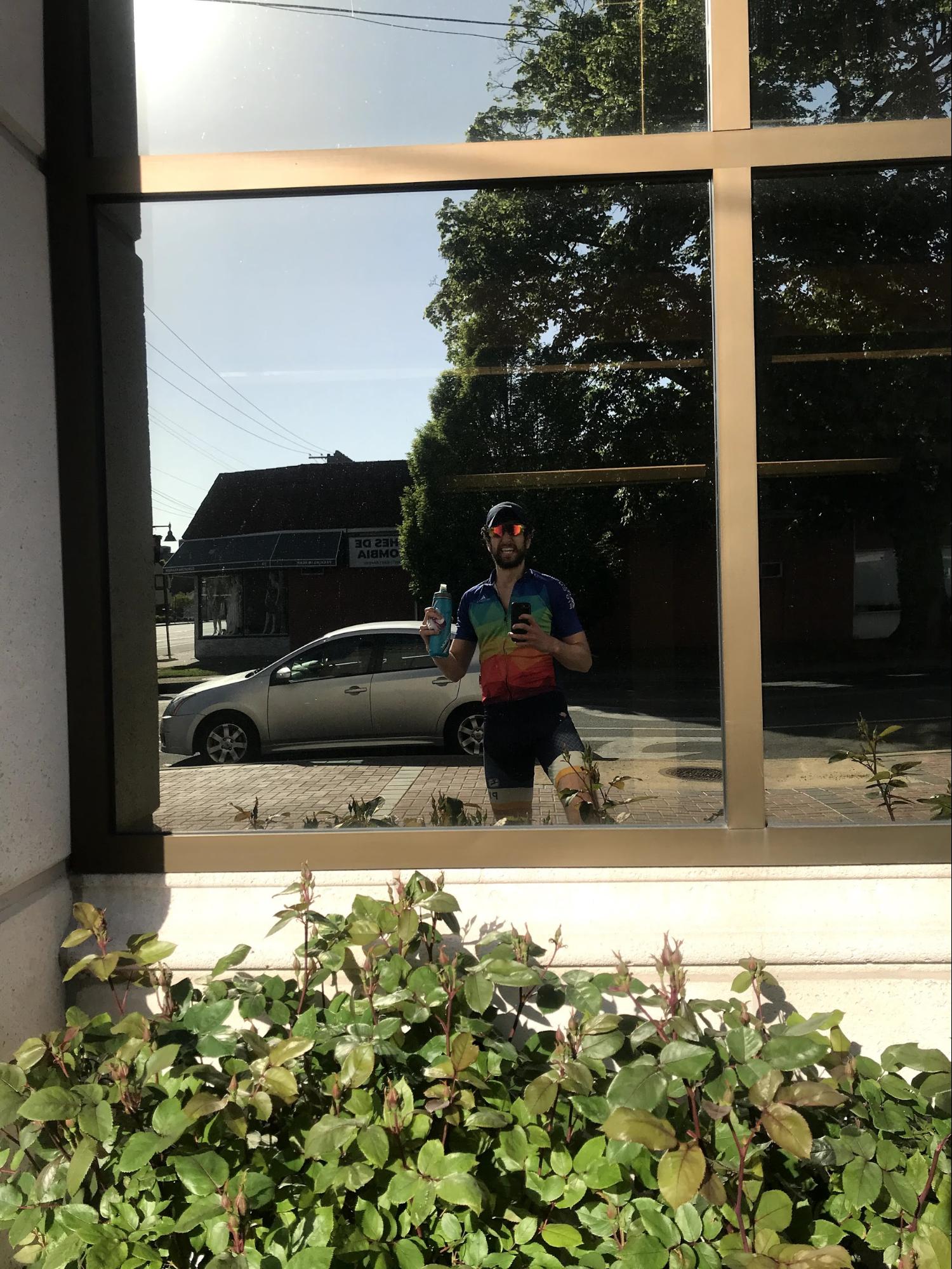 It was an out-of-body experience that impacted me in such a way that I decided to run a 30-mile ultra-marathon in October. Both were two of the best experiences of my life. While there is some physical soreness, the long-lasting effects are magical.

Completing these runs reminded me that there is a finish line. Sometimes that finish line can be reached with your two feet in four hours, but other times, it takes everything you got to get there. But you will make it there.