How ‘Respecting the Troops’ Became America’s Most Deranged Meme

Troop-respecting as we know it today owes much to Bush, Cheney and the War on Terror that followed 9/11

This month marked the 75th anniversary of D-Day, when Allied forces stormed the beach at Normandy to gain a foothold in Nazi-occupied territory, pushing toward an end for World War II. The sacrifice was enormous — perhaps 12,000 dead — and so each year’s memorial is meant to honor their bravery. But for decades now in America, we have not agreed on what kind of dignity our service members are due.

Many left-leaning people want them shielded from unnecessary combat and trauma, and appropriately cared for as veterans. Many on the right, meanwhile, have happily turned militaristic zeal into a meme with their cheerleading. In his D-Day speech Thursday, Trump struck that tone by praising the toughness of American soldiers and saying little on the legacy of U.S.-European partnership.

It’s a deranged form of patriotism you may know as “respecting the troops”: lionizing the selfless warriors on our side, but erasing or downplaying the wider context of their objective.

Trump gets to speak of “the ferocious, eternal struggle between good and evil” in 1944 without mentioning what that evil was: the fascist, racist hatred he courts and pardons today. Likewise, the president finds here a convenient way to bypass one of the more alarming trends in the U.S. security-industrial complex: the militarization of police amid the recognition of white nationalist networks in both the armed services and law enforcement.

None of that is relevant, though, or an allowable topic of discussion, because the troops must be respected, and real Americans give that respect. Help them battle a scourge within their ranks? Not likely! Give them additional training and resources, and hold them to a higher standard? Well, no. That’s not the proper, formulaic respect. 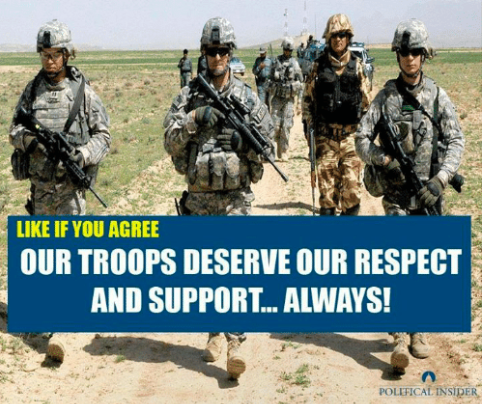 Troop-respecting as we know it today owes much to the War on Terror that followed 9/11. In the aughts, anyone who questioned our geopolitics under the Bush cabinet, or military interventions in Afghanistan and then Iraq — anyone who spoke against the human rights abuses committed by U.S. operatives — wound up accused of betraying the armed services as a whole. “Support our troops” was the catchphrase back then, at once a societal imperative (you could wear a special yellow ribbon to indicate your support) and a reflexive answer to any skepticism of what we were doing in the Middle East. The great linguist and political theorist Noam Chomsky called it a “public relations slogan” and meaningless by design, noting that “its crucial value is it diverts your attention from a question that does mean something: Do you support our policy?”

And, he added, “that’s the one you’re not allowed to talk about.”

Even during the first Gulf War, due to largely apocryphal stories of protesters spitting on or otherwise abusing Vietnam veterans, Americans were careful to separate antiwar sentiment from enmity for the troops. Shortly after this piece was first published, Minnesota author Naomi Kritzer shared her memory of such activism in 1991 and how a sense of swift finality in the conflict led to a symbolic celebration of the troops, decoupled from their actions in the field. It helped that George H.W. Bush’s administration placed great restrictions on the media’s frontline coverage, no doubt remembering how TV imagery of Vietnam had opened civilians’ eyes to the ghastly facts of war.

The result? We didn’t see much of what the troops did, but we knew to call them heroes nonetheless.

Yet the forever war that followed the overconfident adventurism of Cheney, Rumsfeld, Bolton, et al., required an odd adjustment of troop support. With strategic objectives increasingly murky, long-term or unattainable — and rising casualties — focus turned to specific people and episodes in theaters of combat. The 2003 rescue of Army Pvt. Jessica Lynch in Iraq by Navy SEALs, for example, turned into a controversy about government mythmaking in pursuit of positive coverage for the conflict; perversely, she still receives hate mail from ostensible troop-respecters who believe she was responsible for these exaggerations. This prefigured a pair of entangled trends: the rise of self-styled internet Rambos who claim a preposterous level of military skill or service, and the escalating conservative obsession with “stolen valor,” or non-troops gaining respect by pretending to be troops.

Above you see what’s known as the “Navy SEAL Copypasta,” a text meme that originated mysteriously in 2010 and has been reposted, parodied and modified ever since. Regardless of the true author’s intent, it now epitomizes a distinctly male desire to be viewed as badass and intimidating within the non-physical space of the web. Underneath the violent, laughable bluster, it also clearly assumes a baseline respect for the troops, one born out of fear rather than nationalist pride: You should respect the troops since they could annihilate you if they wanted. (This is of a piece with Second Amendment fetishists who daydream of opening fire on whoever may try to confiscate their guns — the “come and get me” mindset.) The threat culminated in the Christchurch mosque shooter’s manifesto, which included the Navy SEAL Copypasta alongside similar trollish allusions.

Just as these aggro characters started popping up online to seize the mantle of war-guy machismo, Washington was taking measures to curtail the unauthorized manufacture and use of phony military decorations or medals. The Stolen Valor Act of 2005 made this a federal misdemeanor, and, after the Supreme Court struck it down as a violation of free speech, Obama signed a 2013 update that outlawed such misrepresentation “with intent to obtain money, property or other tangible benefit.” In other words, you had to obtain something more than respect for the fraud to matter. This left conservative vigilante weirdos to do the pointless work of confronting and shaming lesser valor thieves. 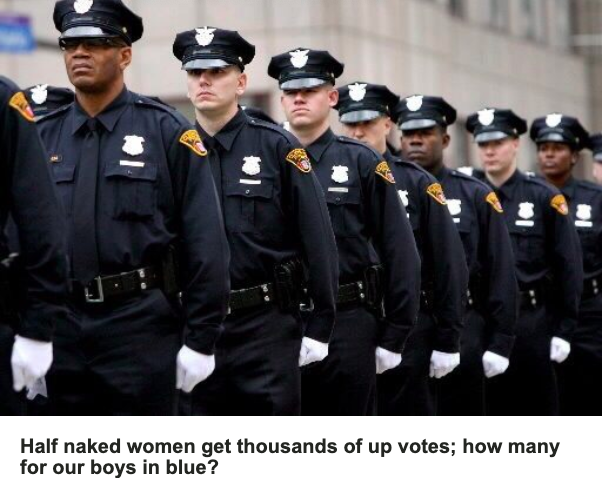 The flip side of this guardianship over troop glory is an annoyance that people talk about anything else. It’s not uncommon, with any content invoking ideas of heroism or noble suffering, to see a comment arguing that veterans are more heroic, and have suffered more. By 2016, earnest Facebook posts to the effect that the troops or law enforcement (“our boys in blue”) deserve the amount of social media likes/engagement we grant celebrities and “half-naked women” had tripped a satirical response: Memes borrowed this language to jokingly demand upvotes for, say, the Blue Man Group.

But the wild election year, with its Republican narrative of a “War on Cops” and empowerment of a Blue Lives Matter lobby, best embodied the fusion of troop-respect and police-respect as a single fixation in the activism of one man: San Francisco 49ers quarterback Colin Kaepernick, who set the NFL afire by kneeling in protest during the National Anthem.

That batshit tweet is courtesy of an editor on far-right blog the Drudge Report, and it neatly summarizes a pathological take that many had on the demonstration. Kaepernick repeatedly cited deadly police violence against African-Americans as the reason for kneeling, becoming an important voice in the Black Lives Matter movement, but his critics honed in on his “disrespect” for the anthem, and then the American flag, and finally the troops. It didn’t matter that many U.S. troops applauded Kaepernick’s protest, affirming that this was just the sort of freedom they fought to preserve; suddenly, closet racists had a way to attack a famous black man while loudly signaling that their support for the armed services had not wavered since the start of the 21st century.

To everyone else, however, these displays were increasingly absurd and unhinged, to the point where troop-respecting could be equated with hysteria — see the anti-Kaepernick set destroying their Nike gear after he starred in a campaign for the brand, or country singer Neal McCoy trying to cash in on white resentment with a song titled “Take a Knee, My Ass (I Won’t Take a Knee),” or the vast universe of guys delivering angry rants in their cars.

Kaepernick’s haters faced mockery in memes that depicted them exploding with rage because “football man don’t stand up,” while their blend of troop-worship and emotional instability found a synthesis in reaction images like Ozon’s Salute, a template created with screengrabs of a Russian streamer who recorded himself saluting, crying and screaming at the music video for Polina Gagarina’s “The Cuckoo,” a song from the war film Battle for Sevastopol. 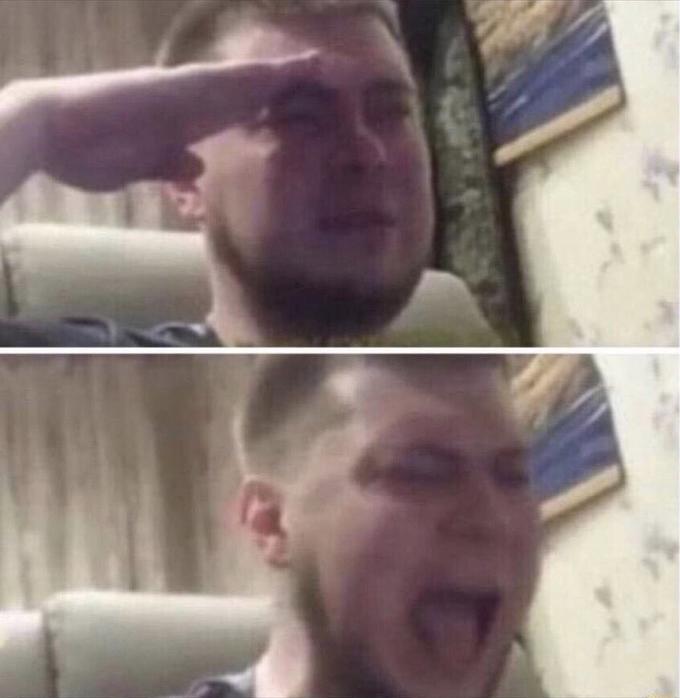 As a president who ran on “law and order,” Trump has done all he can to amplify the call for troop/cop respect, whether by blasting Kaepernick, calling for military parades or doing Top Gun cosplay. But any committed troop-respecter who wants to revel in this also has to sidestep the numerous instances of Trump obviously not giving a miserable fuck about the troops, which are by now a dull, depressing litany.

The fight with a Gold Star family. Trashing Sen. John McCain’s service at every turn (and the White House covering up the U.S.S. John McCain during a Navy visit in Japan). Skipping a World War I remembrance and blaming a slight drizzle. Accepting a veteran’s Purple Heart, saying this was “much easier” than serving himself. Never being honest on his deferments during Vietnam. Falsely claiming, after basically ignoring the deaths of four soldiers in Niger — he was golfing as one of the bodies returned — that Obama didn’t call the relatives of slain troops, either. Expressing the desire to pardon troops accused of heinous war crimes.

In all this behavior, Trump has at last split the two modes of “respecting the troops” apart: One is forged by communities and families of service members, who understand that the military is the single financially viable option for certain young Americans who wouldn’t be there otherwise. The second is self-marketing by rich, connected fuckwads who pray to the god of war, appropriating real courage for idiotic cultural commentary, but would sue you for assault if you threw a milkshake at them. To judge by his waning support among active-duty troops, these people have little doubt as to which Trump is peddling.

A redditor in law enforcement says it best in a post on r/AskAnAmerican, replying to a foreigner baffled by our respect infatuation: It’s a way “to pat ourselves on the back for our ‘support’ of the ‘brave men and women’ when we ourselves haven’t really sacrificed anything,” they write. “When we under-fund healthcare for veterans, or ignore a Vietnam vet begging for change on the street, or send boys into Iraq without adequate humvee armoring, the fact that we criticized [Kaepernick] kneeling makes us feel like we really do support the troops.”

You hope that the hollowness of this rhetoric means it cannot last. Even then, it’s bound to take new shapes — it’s too useful for ideologues who want to frame pacifism as weak or shameful. Resistance to U.S. interventionism is concern, in part, for the sovereignty of different nations, but likewise for the safety and lives of our own troops, and the hawks have to spin that fact away from any debate on military deployment.

Worse, these warmongers are then in the position of acting as if sending troops into harm’s way is the greatest sign of respect there is. It’s merely a comfort, of course, to those who already safe. You may bestow every honor upon the dead, but they will never know.