What Does Life After COVID Look Like? These Artists Have a Vision

Ali Aschman was living in London and soon furloughed from her museum job when COVID reached the shores of the U.K. in mid-March. To make matters worse, two large freelance projects that Aschman, an animator, had lined up also fell through, leaving her with little to do during the partial lockdown but go on long, solitary walks or stay at home and pine for her partner, who was similarly struggling in Chicago. Although Aschman had the funds to fly to the U.S., she couldn’t find a health insurance plan that would cover her during the risky journey.

“I was feeling quite despondent about how long we might be forced to remain apart,” she explains, “and so, I made a comic imagining what it would be like, at the end of all this, to make an epic journey to be reunited with my love.”

Aschman’s emotionally wrought comic, “On the Day We Are Set Free,” is just one of hundreds collected in Rescue Party, a new, ongoing webcomic series from comic-book-store-turned-publisher Desert Island. The series asks contributors to do the seemingly impossible: To look past the negativity of today to envision a better, brighter tomorrow — because, if you can do that, well then, it might just be possible. 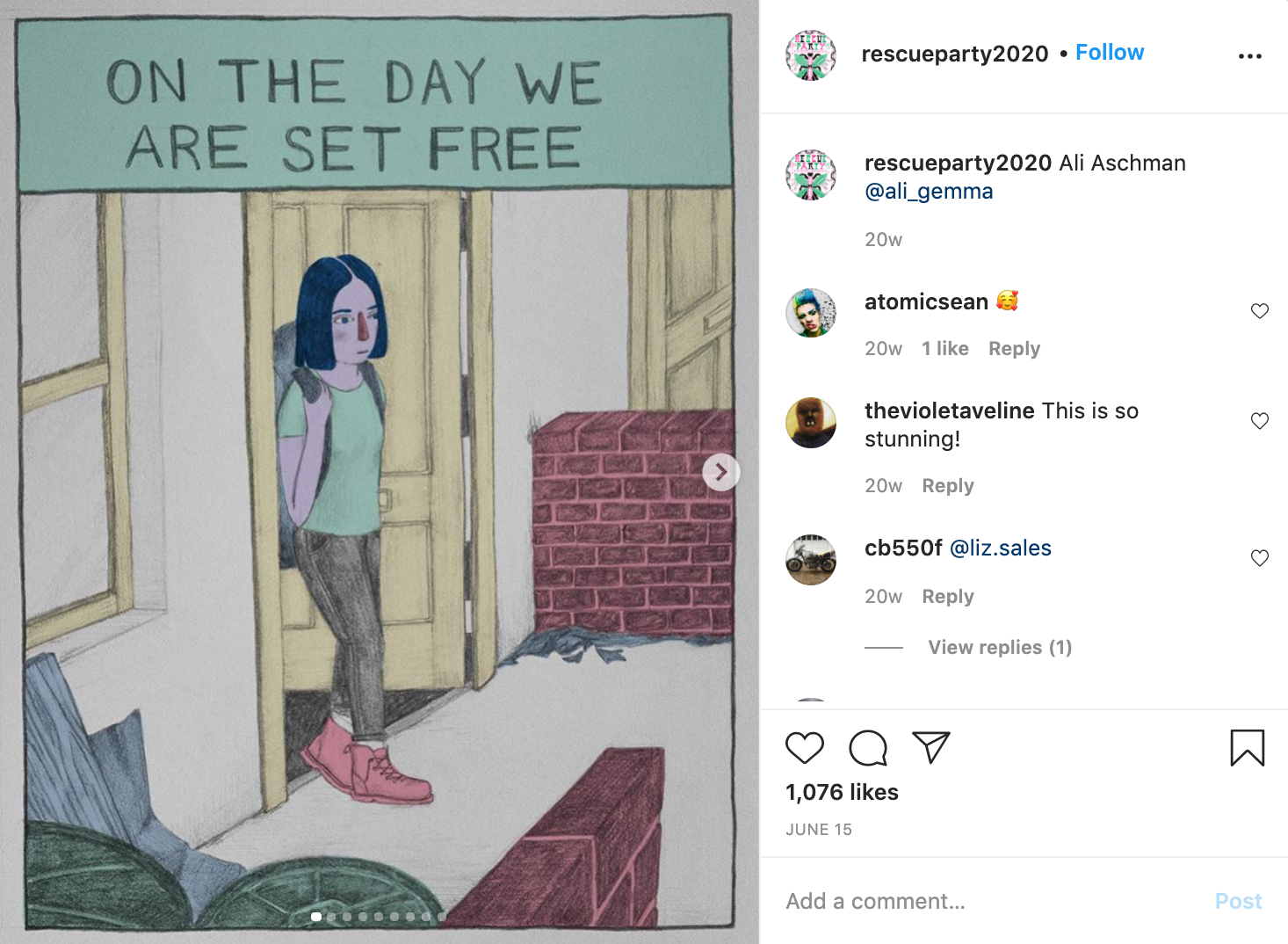 Both Rescue Party and Desert Island are the thoughtful efforts of Gabriel Fowler. An artist himself, Fowler started Desert Island as a brick-and-mortar comic book store in Brooklyn in 2008 to champion unique comics by selling them on consignment. The business allowed him to receive a constant stream of new work from unknown or obscure artists — that is, until the pandemic forced Desert Island to shutter.

With the store closed, Fowler left Brooklyn to quarantine in a cabin in central Connecticut, where he tried to make the most of his time. “At first I was excited to have some free time to work on personal projects, treating it like an art residency and trying to make things every day,” Fowler says. “Immediately it was clear that my practice has become very community-based — and almost so much so that I didn’t even really realize how crucial that is to me.”

Left without his normally steady source of inspiration via the comics mailed into Desert Island, Fowler turned to the only community left to someone quarantining in a cabin in the middle of Connecticut — the internet. Although he only had his iPhone, Fowler was still plugged into the Desert Island Instagram account, where he had previously shared images of the work the store received, thereby building a dedicated following. Now he decided to flip that relationship on its head: Rather than sharing work, he asked for it. Besieged by both the personal stress of COVID and the professional setback of Desert Island’s closure, Fowler needed positivity and community. On April 1st, he issued a simple prompt over Instagram: Email him a nine-panel, color comic visualizing a positive, post-COVID future. 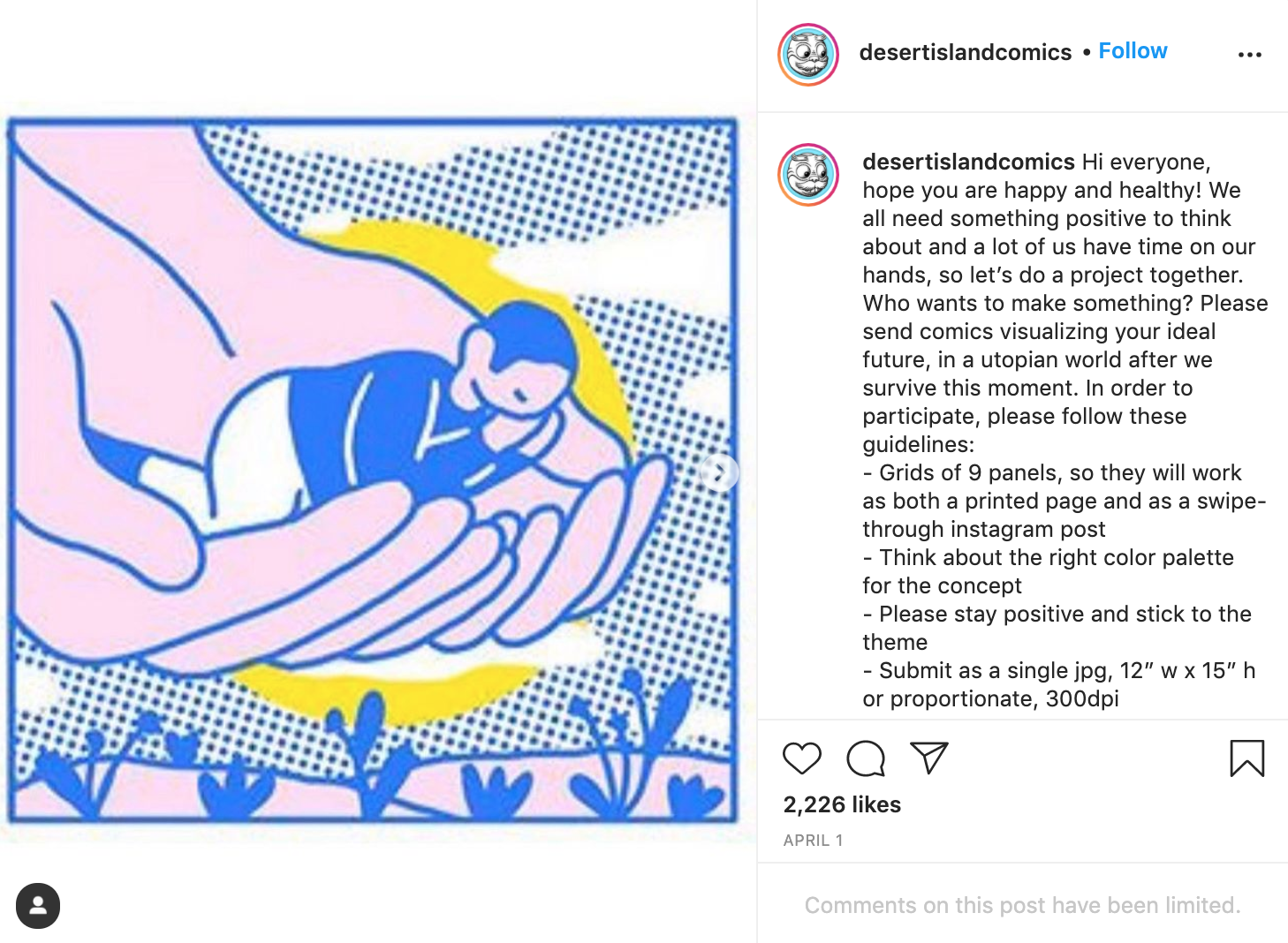 Fowler estimates that he received around 350 submissions in April and May alone. Once his inbox was filled to capacity, he had to enlist the help of someone with access to a computer to store the files, since he still only had his iPhone. He also created a new Instagram account dedicated specifically to the project, which came to be called Rescue Party. The comics themselves run the gamut from deeply personal to politically radical, visualizing reunited lovers (as in Aschman’s contribution), or widespread social justice, or fabulous self-realization. To Fowler, the fact that these submissions were coming in from all over the world drove home the reality of COVID-19 as a global pandemic, as well as the universal value of art. 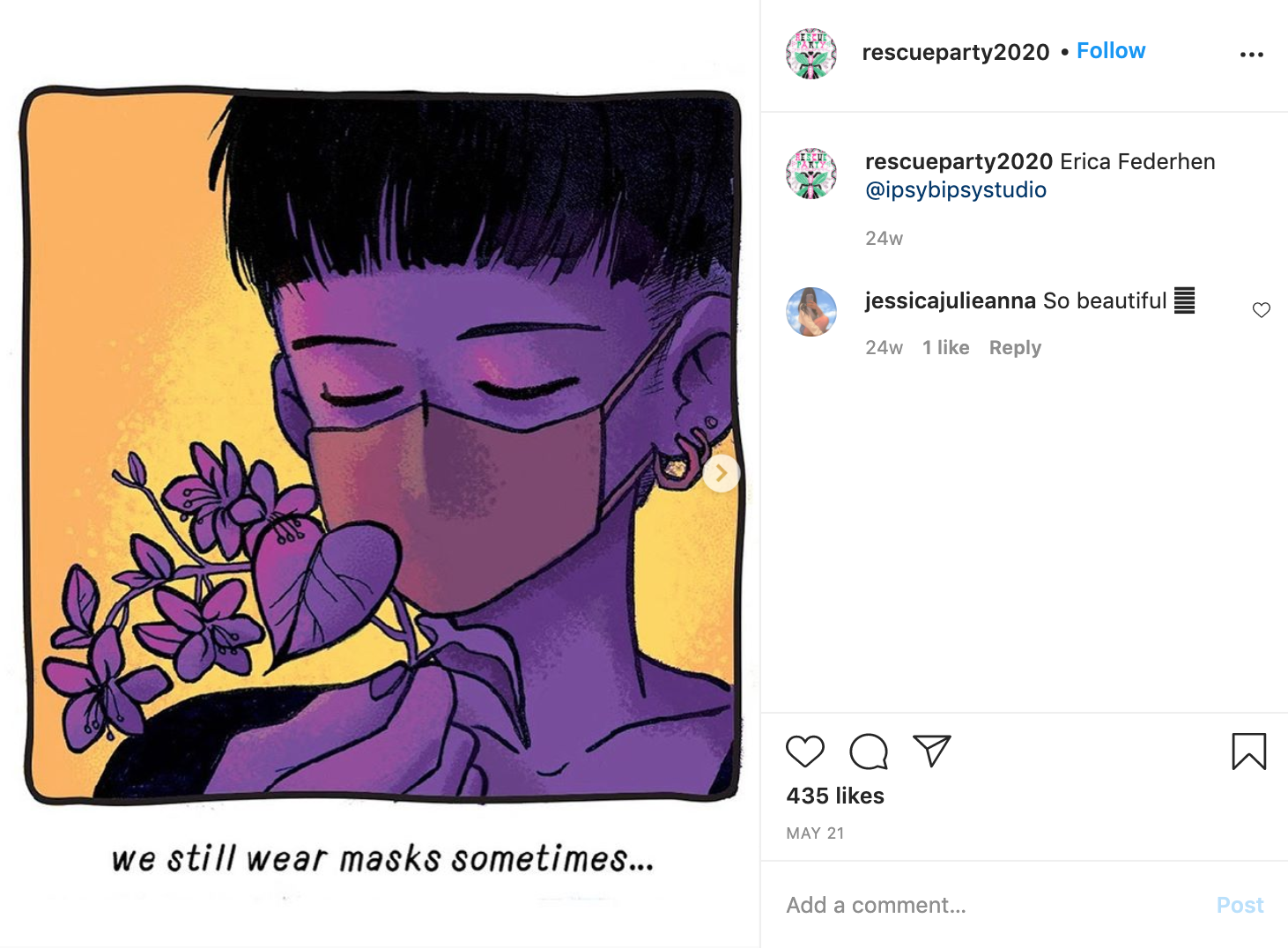 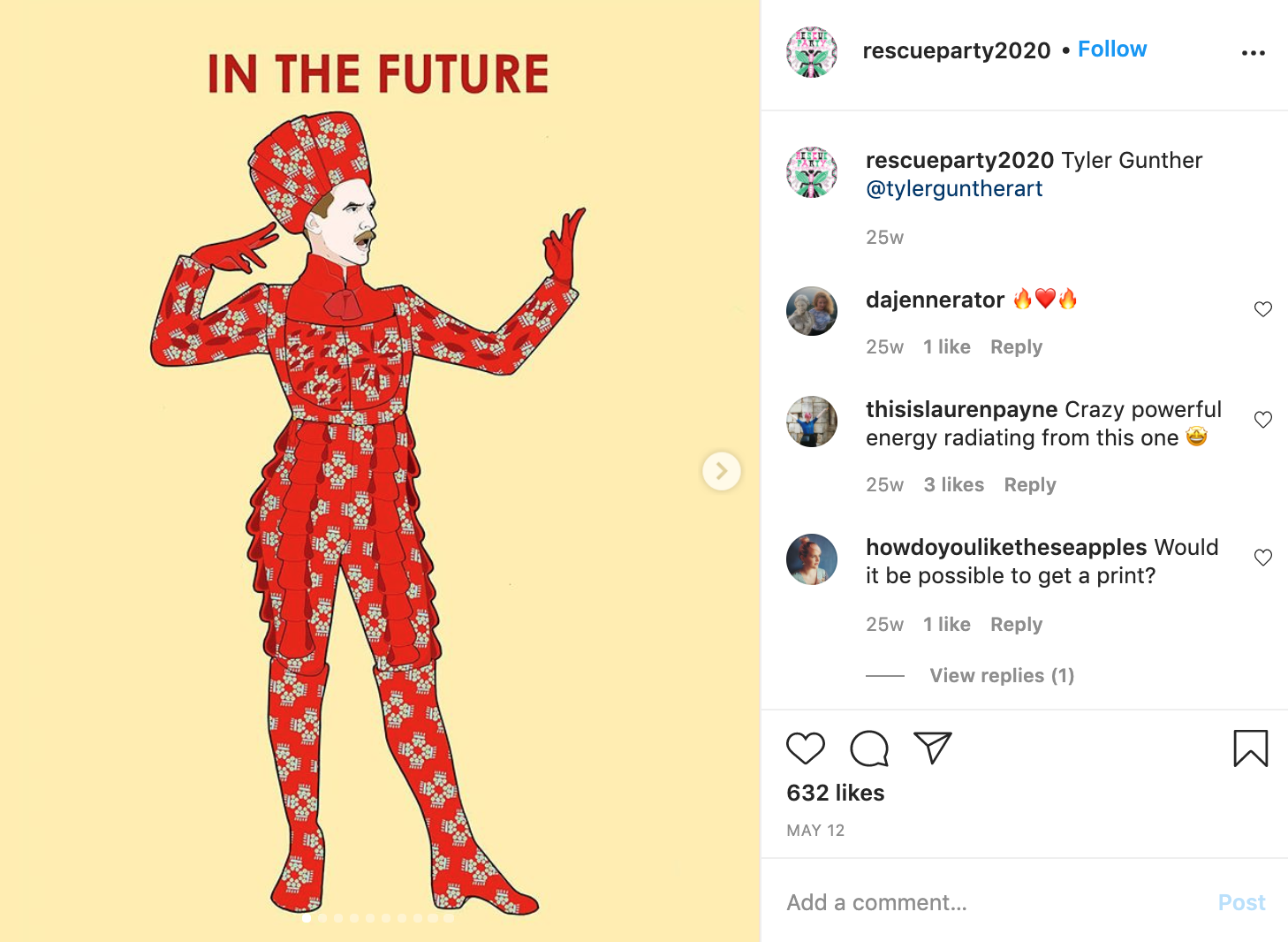 “We all know that COVID is a worldwide problem,” he explains. “But it really became more and more apparent to me as I received pieces from Singapore, from India, from South America, from Africa. It became more concrete that this is a problem that’s affecting anybody on Planet Earth. It also became apparent that anybody on Planet Earth can process this moment with artwork.”

By late May, Rescue Party had proven itself so successful that Fowler was hoping to give the project life in real life, with its own book. It would be a collection of around 80 submissions with the cover designed by John Broadley, an illustrator who was also the first contributor to the series. Fowler was going to raise the necessary funds via Kickstarter, for which he created a detailed video and launched a campaign on May 22nd. Then, 2020 did what 2020 is wont to do: Fuck shit up. Three days later, the Minneapolis Police Department murdered George Floyd, igniting a nationwide political crisis amid the already ongoing health and economic crises. 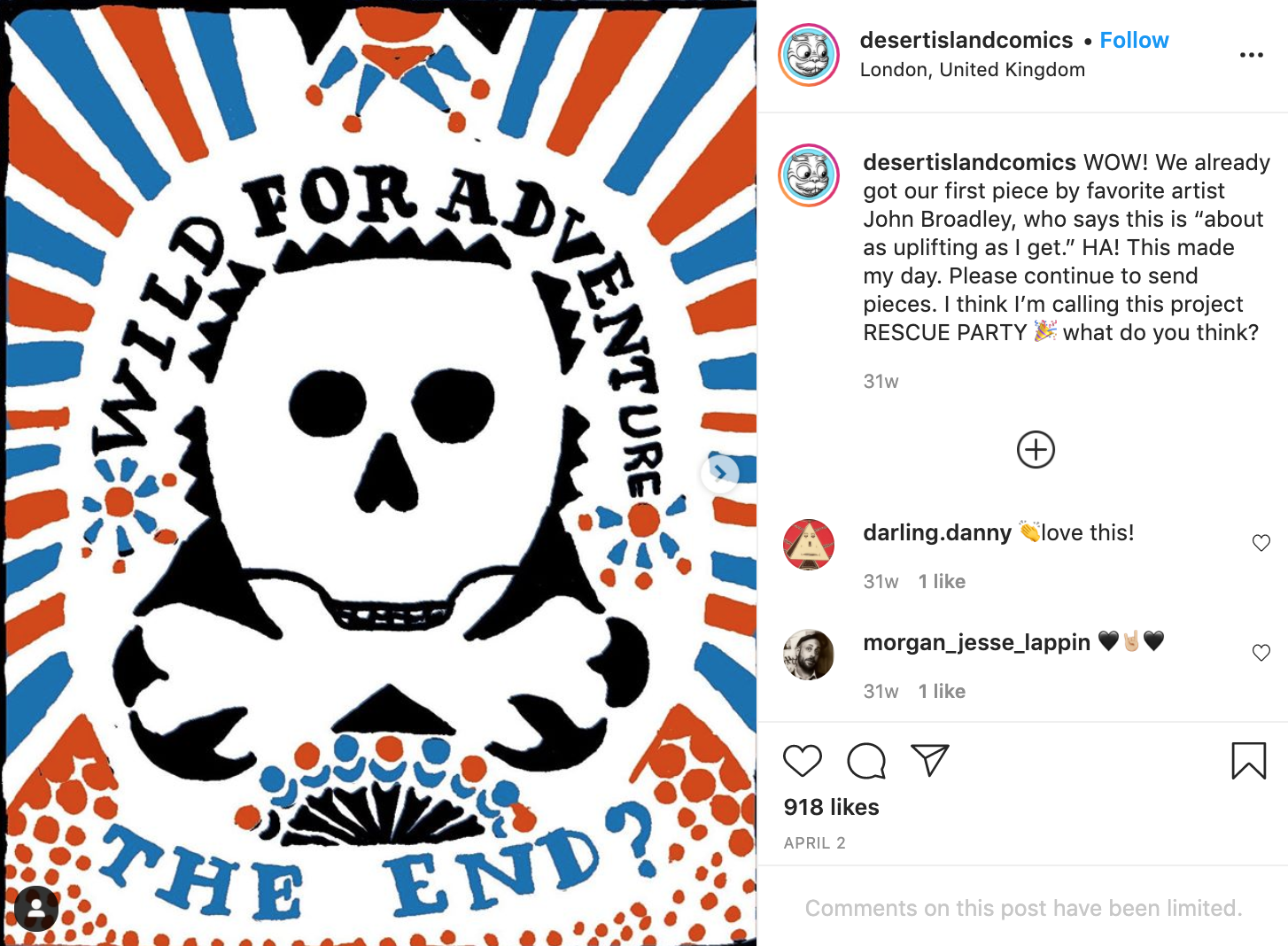 “It really changed the narrative,” says Fowler. “It also changed the very real necessity for funds for people who were protesting, who were in jail and needed bail money. The need for fundraising for that exact moment was really crucial, and I felt like I couldn’t be asking for money to make this book project. So I pulled the Kickstarter and canceled the fundraiser.”

Although Fowler felt that he needed to suspend the Rescue Party fundraiser, he still holds out hope that the project will be realized in book form. In the meantime, the Desert Island shop was able to reopen in mid-August, and like everyone else, Fowler has been focusing on reorienting himself to this new, post-quarantine world. “One crisis at a time,” he says with a laugh. “Hopefully by the time COVID is truly over, I’ll be able to look back at this project and finish designing a book and raise funds to produce it.”

For now, new Rescue Party submissions continue to be published on the Instagram accounts for both the series and Desert Island. Fowler can also take comfort in the fact that the idea underpinning the entire endeavor — that visualizing a better future is the first step to attaining it — has proven true, at least for Aschman.

“My Rescue Party fantasy actually came true!” she says. “I finally found an insurance policy without a pandemic exclusion, so I immediately hopped on a plane to Chicago and have been living with my partner for the past two months. My actual journey was far less dramatic than what I depicted, but the ending was equally as sweet.” Arvind Dilawar is an independent journalist. His articles, interviews, and essays on everything from the spacesuits of the future to love in the time of visas have appeared in Newsweek, The Guardian, Vice, and elsewhere.