The Dawn of the Reply Gal

We’re well aware of the Reply Guy. But what happens when a woman comes along, ostensibly seeking friendship — and won’t leave you alone?

As a woman on the internet, I’m well-versed in the Reply Guy. Basically, if you tweet about a song or a movie, he’s there with a lyric or quote. If you make a joke about sex, he’s there with some sad, perverted innuendo. (A few Reply Guys will also go to the next level by adding negging and more bold come-ons to the mix: “You can’t reject me, I’m rejecting you, you ugly cunt.”) Sometimes he just wants to debate you or play devil’s advocate. All the while, he’ll attempt to correct your correct facts, suggest fixes for your jokes and do anything he can to cement some kind of relationship with you. 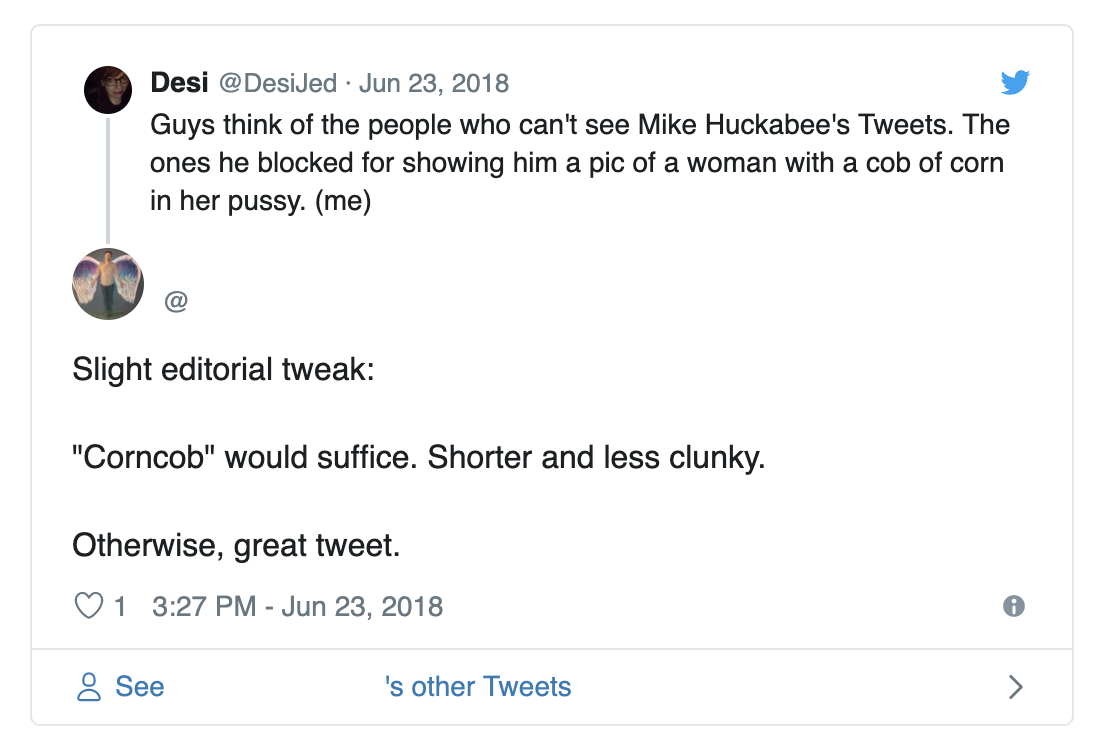 Do women, though, do the same thing?

It wasn’t something I ever seriously considered until I recently got my first Reply Gal, which ended up being one of my scarier social media interactions.

The short(ish) version: A long-time follower, who looking back was always something of a Reply Gal, was constantly @-replying me harmless things — mostly praise or telling me to have a great day. I probably would have muted her if she were a Reply Guy, but unlike with a Reply Guy, I had no fear it would escalate. Then one day she sent me an @ reply apologizing for having to cancel our upcoming drinks date.

My first thought was that I accidentally agreed to something when I was tipsy and accommodating. HEY, IT HAPPENS! But I checked my DMs and searched my mentions, and there was no communication preceding this @ reply. Nonetheless, I immediately apologized for the mishap, sure I’d unintentionally made her think we were going to meet up, something I never would have done with a guy. (Could she have been a guy? I know that men are out here impersonating women — even their own wives — and I didn’t hire a PI or anything, but I did enough digging that I can say pretty confidently that she is indeed female.)

Too late. The situation quickly escalated to multiple @ replies a day requesting last-minute meet-ups, or where she told me she was on her way to my part of town (you know, just in case). There was a desperate quality to the @ replies as she started proclaiming her love for me and tried to convince me that if we could only meet, I’d finally see how perfect we were for each other. After a series of these types of messages, I’d get an apology @, only for the cycle to start anew the next day. 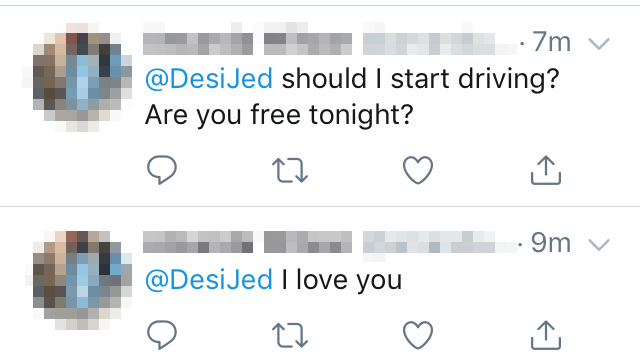 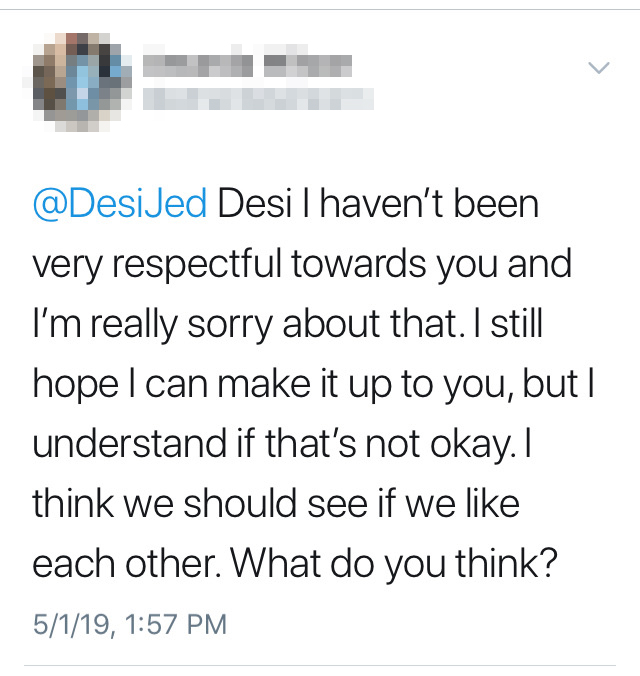 Interestingly, I did something with my Reply Gal I never did with one of my Reply Guys — I considered the state of her mental health. I mean, she’d followed me seemingly forever, but never acted like this before. Did she change her meds? Had she gone through a break-up? Had I done something to make her think this was okay?

Given these questions, I didn’t want to do anything to make things worse, so I threw her a fave or a thank you every now and again on the less egregious @ replies. That, though, was a big mistake, as it only led to more @ replies and was the crumb of validation she seemed to crave.

Now, I felt trapped on multiple angles. Not only did it seem like I was encouraging her, I felt like I couldn’t block her either (again, if she’d a been a dude, I would’ve muted her the moment she began annoying me). Basically, for two reasons: 1) I didn’t want to come across as retaliatory; and 2) I kind of wanted to monitor her, in part because she lived so close to me. Also — and once again, this is a product of me letting women slide more than men —  I felt sorry for her. Who among us hasn’t been desperate for some company?

T.J., a twentysomething writer in New York City with a Twitter following of almost 30,000, has had similar experiences with Reply Gals. “While far less frequent than guys, Reply Gals behave a lot more intimately. They think I need to take their advice and will spam me with full details I didn’t ask for — in an almost maternalistic spirit — on every post I make. If a Reply Gal oversteps by oversexualizing me or saying something that makes me uncomfortable, I’ll be sure to say so, but in my experience, she’ll lean into it and keep engaging anyway.”

Chris, a 35-year-old comedian with a social following of almost 200,000, says that most of the time his Reply Gals are simply trying to flirt. Not that this alleviates the pressure — or awkwardness. “Men are so conditioned to think that it’s great when a woman comes on to them — Oh, a woman is flirting with you? How hard for you! — but it can become stressful when you feel like you’re hurting this person’s feelings by not responding.”

It can also become dangerous. “The scariest moment for me was when a woman who often got into my mentions threatened to harm herself if I didn’t respond,” Chris says. “On the one hand, she was looking for a reaction from me. On the other, you can’t just assume someone is ‘faking it’ for attention. She could’ve really meant it and really harmed herself.”

My Reply Gal certainly had me rethinking things. I tweeted less personal things. I didn’t promote a friend’s show I was going to because I was worried she’d show up. I also, though, wondered if I was being overly dramatic.

For advice, I sought out friends who had experienced Reply Gals themselves. They were all convinced that remaining unresponsive was the only way to go. (WHICH DUH, IS EXACTLY WHAT I WOULD’VE DONE WITH A GUY!) In particular, one told me, “The first, last and middle rule of this shit is DO NOT ENGAGE. If you respond to them at all, it counts as engagement. Then you go from being The Greatest Person Ever to The Horrible Asshole I Always Suspected You Were. It’s a blast!”

Ultimately, I took their advice. It more or less worked. There have been a few sporadic comments and Instagram messages, but they’ve mostly gone away completely.

I do still believe that there are a lot fewer Reply Gals than Guys, and I by no means want to absolve men of their Reply Guy shame — I’m looking at you, mirrored-sunglasses Gary, the “proud stepdad” who wants to buy a pair of my used panties. But perhaps it’s wise for all of us to look at the false sense of intimacy we can have online with people we don’t really know. It’s probably equally wise to be a bit more cold and reserved on social media. Not that it will keep me from tweeting whatever nonsense pops into my head.

I’ll go off the grid when I’m dead.