Is anything more controversial in the parenting world than teaching kids the ice cream truck music means they're out of treats?

As soon as I saw that size 3T Johnny Cash shirt on the rack in Target, I knew what I was going to do with it. My daughter was only two years old, and while she seemed to enjoy Johnny Cash’s music the few times I’d played it for her, she had no idea who he was, what the music was about or why a man would ever name his boy “Sue.”

I got the shirt to recreate what’s probably the most iconic image of Cash: the picture where he’s scowling and giving the finger to the camera. So I put the shirt on her, positioned her (and her finger) accordingly and told her to make the meanest face she could.

The picture, as far as I was concerned, was an unqualified success. When I posted it on Facebook however, the reactions were mixed. Some got the joke, some didn’t and at least one person reacted with prudish horror at what I’d done to my toddler. Parents — at least those familiar with the image of Cash — got the joke, though. Parents understand that to be a parent, you need to do this kind of shit to your kid just to keep your sanity. You need to do embarrassing things and make inappropriate jokes, otherwise, you’ll lose you’re fucking mind in a sea of Barbies, imaginary tea parties and Disney movies played on repeat.

That need to make those jokes is exactly why the popular Spicy Parenting Tips subreddit exists — it’s the online gathering spot for inappropriate and often dark jokes about being a parent. And while there is the occasional serious parenting tip, for the most part, it’s a joke and the people posting there seem to understand that. Still, you can never quite underestimate how stupid some people might be or what someone might take seriously. So, in case anyone wants to really use these spicy tips, I got some real childcare experts to weigh in on some of the subreddit’s most popular posts.

On Teaching Your Kids When to Appropriately Use Curse Words

Theresa Russo, PhD in human development and family studies and mother of two: Kids are literal, and they’ll take a literal interpretation of what you’re telling them. Even if you’re trying to teach them when cursing is okay, they’re going to use the word inappropriately in public somewhere.

All parents do it. Like, when my kids were young, they used to ask me while we were driving, “Mommy, is that a damnit car?” The best way to handle this is to say to them, “I know you hear mommy and daddy use those words, but they’re not nice and I shouldn’t be using them either.” You also have to check your own language a little bit more. It’s hypocritical, though, to punish them for language they’re learning from you, so simply correcting them and curbing that langage yourself is really best.

Tyrone, childcare professional and father of three: I’m not into kids cursing — I’m from the old school where you’d wash your mouth out with soap and all that nonsense. Even as an adult, I might drop an f-bomb here and there, but I’m always conscious of what I’m saying and who I’m saying it around.

Lindsey Brescia, english teacher and mother of four: I’m not down with kids and swearing. As an English teacher, I want them to know how to do it, and to know how to conjugate “fuck” properly when it comes time for them to use it, but no, I’m not cool with them swearing.

On the Ice Cream Truck Music

Brescia: I wouldn’t do that. If they got ice cream yesterday, you can just explain that ice cream is a “sometimes” food and that you can’t have it today. The ice cream truck is a totally teachable moment.

Russo: I thought this one was funny, but if you’re actually going to do it, eventually your kids are going to find out you’re lying to them. Lots of parents do silly things like this, though. Like, one of my friends told their kids that the most desired part of the brownie pan was the edge so her kids wanted that and she got the good ones in the middle. It’s harmless, but eventually, that lie is going to catch up with you — they’ll find out the truth and wonder exactly how much you’ve lied to them over the course of their lives. 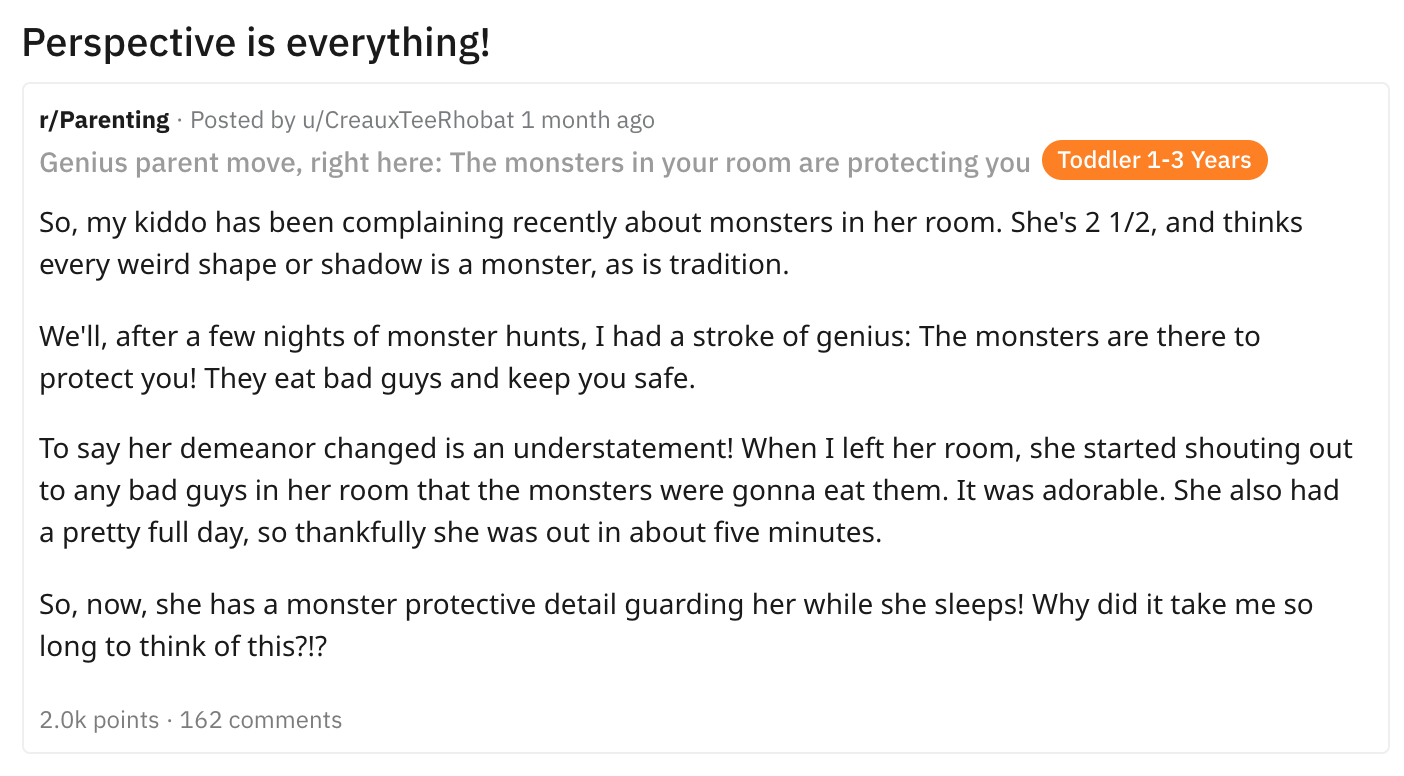 Brescia: No. I don’t do monsters.

Tyrone: That one’s just cruel. That stuff can last years with kids worrying about ghosts and goblins. I wouldn’t do that.

Russo: For that age group where kids might think there are monsters in their room — like ages 3 to 5 — you can say to them a million times that there are no monsters, but they’re not going to believe it. Instead, you literally have to show them that there are no monsters under the bed or in the closet. They need to see that. Some kids are still afraid after that, so saying that monsters are a good thing instead of a scary thing might actually work. It wouldn’t be my first approach, though.

On Reading Books That Aren’t Age-Appropriate

Russo: When your children are babies, much of it is about the tone, so people might read the newspaper out loud and you’re spending time with them and doing two things at once. There’s nothing wrong with that, but as a kid ages up, they’re beginning to understand and it becomes less appropriate and it’s less engaging. Kids books engage kids and make them curious about reading, but that’s not going to happen with a big novel. You couldn’t do that for very long because you’re not engaging them.

Brescia: I think for listening and for attention, that’s actually good, depending upon what it is. I had a friend last year telling me that they were reading The Great Gatsby to their young kid and they asked me if it was okay. I said, “Yeah, if you think murder and adultery is okay, sure.” It depends on the content, really, and I’d skip over something that’s really inappropriate, but it’s cool for them to hear that language. It might be boring and you don’t want to alienate them from those books, but a little exposure is good.

On Whacking Your Kid With a Pillow

Russo: It depends on the age group and how hard you hit, but you can be playful and gently do that. If you’re really wailing them with a pillow though, that’s not okay. That’s my thing with so many of these “spicy parenting” tips. I understand it’s a joke but context is always misunderstood by someone. You don’t know how someone is going to take something. If it’s playful, hitting a kid with a pillow might be fine. It just depends how seriously people take it, because some stupid person will read this and think it’s real parenting advice.

On Slapping Your Kids to Get the Phone Back

Russo: That’s completely inappropriate. I don’t think that kind of stuff is funny, it’s just re-enforcing really bad parenting. That’s not teaching anything. Parents who would slap their kid in the face are just teaching them that hitting or scare tactics are an effective way to get a behavior change and it’s not. You’re teaching a kid that that’s how you get what you want, so a parent who does that shouldn’t be surprised when they get a call from school for their child hitting another kid. Things like this don’t even fall into humor for me.

On Throwing Away Random Rocks and Sticks

Brescia: I love that one and I’m stealing it because I have so many fucking rocks and sticks in different places all over my house.

On Cheating at Games to End Them Sooner

Tyrone: That’s something I would totally do. Kids always want your attention, but sometimes you have other things to get to, so I’ve definitely snuck a peek at my kid’s cards to end a game sooner. I’ll continue to use that one, too.

Brescia: We’re all entitled to wanting a break. I haven’t actually done this to my kids, but I get it. I wouldn’t judge.

On a Bag of Tortilla Chips for Breakfast

Russo: That one is no big deal. Occasionally that happens. If you tell a kid to get their own breakfast and that’s what they pick, fine. One time, it’s no big deal — we’ve all done that.

Tyrone: That one sounds like something I’d probably do. If it saves me some time, definitely.

Brescia: Yes. 100 percent. Especially now, during the pandemic, definitely. Maybe a year ago, I would have said “no,” but now? Yeah, totally. Let me tell you what happened a couple of days ago. So, my kid and I made late-night pasta and I was watching The Bourne Ultimatum, which is arguably the best Bourne movie. My daughter dropped pasta on the floor and I said, “I’ll get it tomorrow.” In the morning, when I was getting the baby dressed, he found this semi-dried pasta on the floor and was eating it and I said, “Well, okay, it’s fine. I don’t have to feed you now. It’s fine.” That’s where I’m at now.