Gentle Spiders and the Chill Bros Who Love Them

Meet the gents of r/spiderbro, a community for chill arachnids and their best human friends

If you think about it, men are a lot like spiders — they have eight legs, are emotionally unavailable and can be a pretty chill hang. So it makes perfect sense that a dude created r/spiderbro, a subreddit devoted to chill spiders who are on our side, and the low-key enthusiasm they inspire. It’s a gentle place where people are gently excited, gently appreciative and gently respectful of spiders just doing their gentle spider thing. 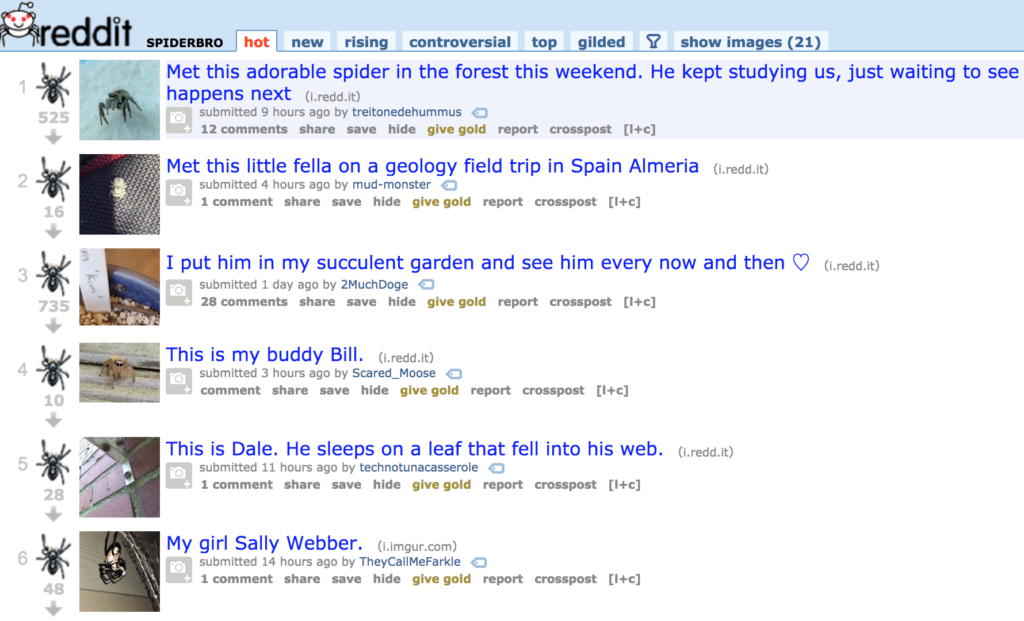 It’s an important corrective to the Misunderstood Spider, a meme about common house spiders who just want to be your pal and eat undesirable insects for you but instead are constantly being killed off by you and your dimwitted family. At r/spiderbro, no such misunderstanding exists, and spiders are held in the highest possible esteem — that of guardians and that of friends. They protect us. We protect them. Simple.

“A place for friends of spiders, who are our bros,” the forum description reads. “Spiders are fun, mostly friendly creatures that just want to enjoy a good meal (albeit of flies) and chill like you do. Post your favorite pics or stories of spiders being bros!”

That is the bulk of the site: Images and sometimes videos of spiders in normal spider situations, doing normal spider things, with captions of low-key enthusing:

Comments chime in respectfully, and enthusiastically.

“That is such a cute idea,” someone responds. “A lil garden bro. Did you name it?”

Of course. His name is George, in fact. Another spider who makes an appearance, Dale, sleeps on a leaf that fell into his web.

Elsewhere, spiders are bragged about on the site as an “absolute unit” or a “stunning bro” to check out. Such fawning is, of course, anathema to the spider reputation in most of the world, where outside of Charlotte, the unwitting star of Charlotte’s Web, they are vicious, callous creatures. Here, spiders are not just cool and chill, they even offer a protective spirit to man’s castle.

There are only two other spiderbro mentions in the ether, but both support this alternate theory: One is a 4chan “greentext” story about spiderbros who thwart cockroaches, burglars and would-be rapists for their pals. Another appears as a bonus power for a suit on Spider-Man: Homecoming game on PS4. (“The Spider-Bro is a small drone that temporarily paralyses enemies, allowing you to Spider-kick them in the Spider-arse,” the Short List writes of the special power.)

Similarly at Reddit’s spiderbros, commenters go so far as to give the full benefit of the doubt of human-pet personification that we give all our domesticated companions. For instance, in typical spiderbro fashion, this little guy was captured doing a spider version of fist bumping:

“I mean, you were CLEARLY asking for a high-five, and a bro won’t leave you hanging!” a fellow redditor commented.

Being chill and useful and never leaving a fellow bro hanging? Why, it’s just the spiderbro way.

Spiderbro creator and moderator Agnostix says that’s exactly what inspired him to start the forum.

“I used to live in an apartment complex that had a lot of dog poop stations, where the residents could empty their scoopings after picking up after their dogs,” he tells me by email. “There were always a lot of flies hanging around those stations, and it was very annoying to walk by them (not to mention the smell was bad). One day I noticed a jumping spider hanging out on one of the stations, snatching flies out of the air. I thought it was the coolest thing ever, so I took a picture of the spider and posted it on Reddit.”

That was four years ago, and in the intervening years, Agnostix believes strongly that the forum has helped dispel some myths. “It has helped people overcome arachnophobia and realize that spiders play an important role in our ecosystem,” he says.

So I ask Crawford to take a look at the spiderbros subforum to see what he thinks. “It’s nice, and there’s nothing wrong with it,” he says by phone. “Even if a few mistakes get made, like referring to female spiders with a male pronoun. In fact, most of the spiders noticed are females. Because they are larger and longer-lived. Why do people call all spiders ‘him’?”

He also noticed about half the photos show jumping spiders, which he says makes a kind of sense. “They’re not the spiders that are most often seen [in the United States], but they are the spiders that people tend more of a connection to because you can see that they see you.”

In other words, they are the only ones with the visual acuity comparable to ours. “They can actually see a human being as an object,” he says. “Other spiders pretty much can’t. Like tarantulas that are commonly kept as pets, they can’t even form an image with their eyes.”

I ask him about the image of spiders as offering some kind of protection to us. While it’s refreshing to have people finally think of spiders as less scary, he says, it’s not exactly a mutual feeling with the spider.

“Spiders are not really harmful at all, especially in comparison to our fellow humans,” he says. “A human can feel protective of a spider. I would say the spider does not exactly reciprocate, because they don’t have human feelings.”

However, what they are — and what r/spiderbros’ creator and its followers understand — is extremely important to our ecosystem, as Agnostix notes.

“Spiders are by far the most important of all predators on insects,” Crawford says. “If some arachnophobe could have a wish granted and make all spiders vanish, human civilization would end very quickly, because tens of thousands of insect species would go into a boom-and-bust cycle like locusts, eating everything in sight and crashing. Then building up another population, eating everything in sight and crashing. And so on. They wouldn’t be predator-limited anymore; they’d have to become food-limited.”

What they also get right at spiderbros is that you really shouldn’t be afraid of most spiders you encounter. You might not want to pick up a brown recluse or black widow, Crawford says, but neither is going to go out of its way to bite you.

“What I tell people who ask me what to do with a house spider: just wave as it goes by,” he says. (You don’t need to put it outside — house spiders are called that because they’ve actually never lived outside.)

That fits perfectly with the r/spiderbro philosophy. You don’t need to go fist-bumping your spider pals — just wave as they go by. Appreciate them. Even if you feel so keen on spiders that you imagine them to be your friends.

“Where else is friendship but in people’s heads?” Crawford says. “It’s not something you can lay on a table and point to. Right?”