The Secret Poop Tool Lurking in the Family Bathroom

From a very young age, redditor u/LearnedButt had a propensity for clogging the toilet. In fact, he took such impressive dumps on a such a consistent basis that his dad would haul him over to an uncle’s house “specifically and intentionally” to leave his brother a big mess to clean. It was “one of my father’s particular character quirks,” LearnedButt says. “He thought poop was funny.”

LearnedButt, who’s now in his early 40s, inherited from his dad a casual comfort in the bathroom, especially when it came to toilet trouble. “I remember some of our early heart-to-heart talks were done with the bathroom door open while he was pinching a loaf, asking me about my day,” LearnedButt says — “before he sent me to fetch the poop knife.”

Yes. LearnedButt inherited something else from his dad: using a knife pre-flush to chop big logs and prevent clogs. The original looked kind of like this, LearnedButt says, sending me a pic:

Much of Generation X and Y grew up with weak toilets due to modern water-conservation efforts and limited technology. To avoid clogs, some dads actually tried to smuggle more powerful toilets into the U.S. from Canada. Others, however, simply procured poop-chopping tools like wooden sticks, knives, pencils and even coat hanger contraptions. It’s far more common than you might think.

Go ahead, ask your parents. They probably had a poop knife too.

One night, while talking to his wife, LearnedButt realized a poop knife was the kind of thing that might turn heads. “I knew it wasn’t normal but never really thought much of it until my wife and I were in bed talking about my father who’d passed three to four months prior,” he tells me. “I was talking about how wonderful but weird he was, and especially how cheap he was. We were upper-middle-class and he was an executive at a company, but we only had one poop knife.”

She asked him what a poop knife was.

“I told her. She was alternately horrified and laughing at the same time, with tears in her eyes. It was the kind of laughing where you can’t breathe.”

So he wrote a “confession” about it on Reddit. Quickly, the post exploded, earning a sky-high 29,000 points and becoming the stuff of internet legend, later reappearing on this subreddit for preserving classic chunks of text.

Here’s some of the reaction:

Inspired, I spoke with many other people whose families had their own beloved poop knife. Frankly, I was astonished by what they told me. A fair warning: You’re gonna want to wash your hands after reading.

Tricia, a 48-year-old mother of three in California, says it’s the low-flow eco-friendly toilets in California that require her family to use a metal spatula to cut their poops. They call it the “Shatula.” Growing up, her family didn’t need one for regular use. But once, her dad needed to cut her brother’s poop with a wooden paint mixer, she tells MEL. “The wooden stick, being porous, seemed like a bad choice to me at the time.” Today, however, “the affectionately named ‘Shatula’ that we use is metal, so it can slice well. Plus it has a long enough handle so you don’t have to get too close, and also [it can] be cleaned reasonably well and stored for later use.”

She sent me a photo: 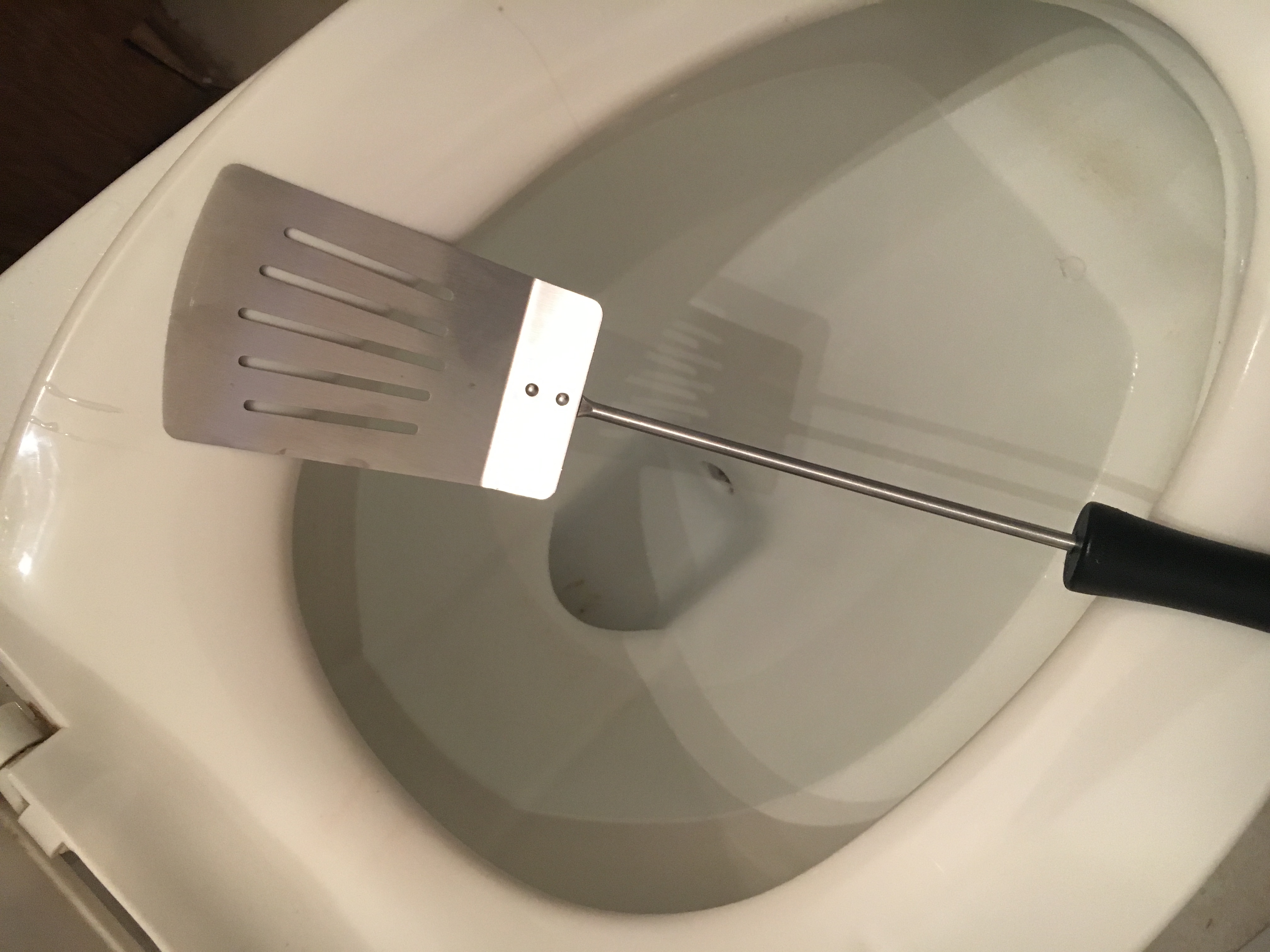 “Usually it just takes one slice, right down the middle, which not only makes it smaller but kind of points it in the right direction,” Tricia explains. “What I wouldn’t give for the ‘whoosh!’ of the toilets of my youth!”

Reddit user WillStuh, a 30-year-old in California, began using wire hangers to cut poop after getting in trouble for clogging the toilets. “We had a low-flow toilet, and I was quite hefty back then, around 220 pounds (180 now), and I ate a lot and had a fairly poor diet, so that contributed to the gargantuan dumps.”

His toilet didn’t help matters. “We lived in California with an eco-friendly toilet, but my dad always got mad that I kept clogging the toilets. He thought it was because I used too much toilet paper.” One day, WillStuh saw an abundance of wire hangers, bent one into an L shape, and “would use the hanger to poke the poop around a few times” until it flushed. He “bent it so that one side was a kind of handle, and the end was a small L shape.”

He recreated the original for a photo: 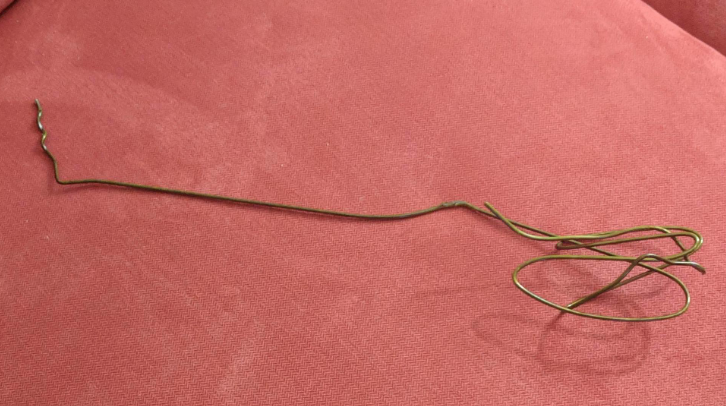 Beatrix, now 36 and living in California, has a similar story. She tells me she began utilizing a No. 2 pencil (ha ha) for toilet assistance around the age of 12. “Like other poop knife users, I had big dumps. I’d plug the toilet every time I took a shit. I was sick of plugging the toilet, and in my desperation and digging around in my bathroom cabinet drawers, I found a No. 2 pencil.”

A pencil? And risk getting your hand that close? “The lead was broken off so it didn’t leave any marks, no evidence of its dirty job,” she says. “It would take just a couple quick chops.”

Where… Where Does It Live?

Tricia keeps the Shatula in the upstairs bathroom. “We keep it in the cabinet under the bathroom sink, with a bottle of bleach water mixed,” she explains. “After use, we hold it over the toilet and spray, spray, spray till there’s no evidence of poop, then wipe it down with flushable wipes, and then flush the wipes down too. We’re all pretty efficient at it now!”

LearnedButt’s old poop knife was “was always in the laundry room hanging on the rusty nail. … It hung from a hole in the wooden handle on a nail that was pounded into a stud.”

WillStuh’s hanger “was pretty much out of sight” — but he admits it might’ve not been out of smell. “I know this sounds gross, but I didn’t really wash it after. I just kinda rinsed it with clean toilet water.” Eventually, he says, it disappears. He thinks his mom threw it away.

Beatrix would hide her pencil in the drawer where she first discovered it. After using it, she’d “clean it with some toilet paper, wrap it in a sheet of TP and back in the drawer it would go — way back, hidden behind some other knickknacks. Pretty gross, now that I look back in it.” What happened to it? “It’s probably still in the cabinet. Oh my god, I hope not.”

A Tradition Worth Passing Down

Beatrix finds herself missing that No. 2 pencil sometimes. “My current nemesis is my husband’s childhood home, which was built in the ’20s and I’m pretty sure the toilet is from then. They don’t even keep a plunger in the bathroom! I’ve often thought of my poop pencil while I’m shitting there. It would have come in handy a few times.”

To Tricia, every modern home should have a Shatula. “I highly recommend a spatula for the catchy nickname. Frankly, I’m shocked that every family doesn’t have a Shatula. Maybe they need more fiber!”

Today, LearnedButt keeps a few “utility knives” in the garage. His wife quickly learned to avoid them after she accidentally used one or two without realizing their true purpose. She refuses to touch them now.

LearnedButt says he plans to pass the knowledge of the poop knife down to his children. “The twins are only a month old, so while they are pooping volume, it’s neither solid nor in the toilet,” he says. “I’ll cross that bridge when I get to it.”

As for the poop knife, “I will wait until they 1) need it, or 2) bring dates home so I can tell the dates as well.”

Whither the Poop Knife?

Will technology, I wonder, eventually render these toilet tools useless?

I asked Jack, a plumber in Chicago. He had never heard of a poop knife before I reached out, but he says the cursed modern low-flow toilets are fine for most people — they shouldn’t have anything to do with a spate of frequent clogging. “Toilets in the U.S. are allowed to use only 1.6 gallons per flush, but that should be sufficient to clear most people’s waste,” he says.

But LearnedButt isn’t most people. “[My family] poops big,” he shrugs. “It may be genetics, or our intestinal flora. … My diet has completely changed, I’m in a new house, and my daughter also has massive turds.”