Whether they like the Oscar-winning movie or not, they can’t stand seeing a ‘whore’ reject the ‘nice guy’

To the red-pilled man, life isn’t like a box of chocolates: He knows exactly what he’s going to get.

“Tonight I got hit with an epiphany on the movie Forrest Gump,” says Jay Lee, a YouTuber with two dozen subscribers, in a video he posted last September. In the half hour of footage that follows, almost nothing is visible — he seems to be walking somewhere in the dead of night — but he is still able to expound upon the 1994 Best Picture winner as a critical document of “female nature” in the character of Jenny, the tragic woman Forrest yearns for across the decades of his uniquely eventful life.

Lee notes toward the beginning of the clip that he has no idea if the director or writer of the film intended to portray Jenny, played by Robin Wright, as the “cunt” and “slut” he takes her for. In fact, he says he has no idea who made the movie. But he has lots of thoughts on how Jenny exemplifies “modern women” in that she uses sex to get by in life, ignores the “nice guy” Forrest for years and ultimately leaves him a single father.

Some might want to let her off the hook because she was sexually abused as a girl, says Lee, who thinks there is “some truth in that.” But, he continues, “I don’t think that fully, really sums up Jenny.” At one point, he references a Family Guy gag in which the long and winding love story is boiled down to three quick scenes where Jenny is brutally, cheerfully direct about ditching Forrest to fuck as many other men as possible — until she has a contagious, incurable disease and deigns to “have pity sex” with him.

People immersed in right-wing ideology have a maddening habit of misreading art and citing works that run counter to their own ideas; the “red pill” concept itself is a mangled interpretation of The Matrix, rejected by Lana and Lilly Wachowski, creators of the influential sci-fi franchise. What’s unusual in manosphere analysis of Forrest Gump is that guys appear to identify a genuine weakness of the movie — its dehumanization and judgment of the female lead — as its greatest (if accidental) insight. Perhaps because Forrest’s journey, with the help of CGI trickery, intersects with many of the 20th century’s actual events and historical figures, they also grant it the texture of reality. It’s not that they literally believe Forrest and Jenny existed and led these lives; it’s that they see the narrative as accurate to the gender crisis they’ve constructed. 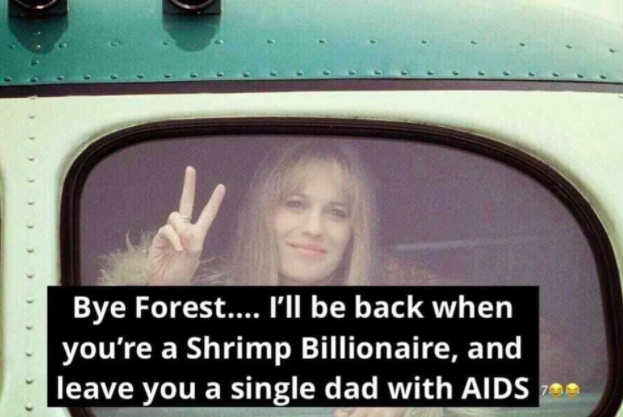 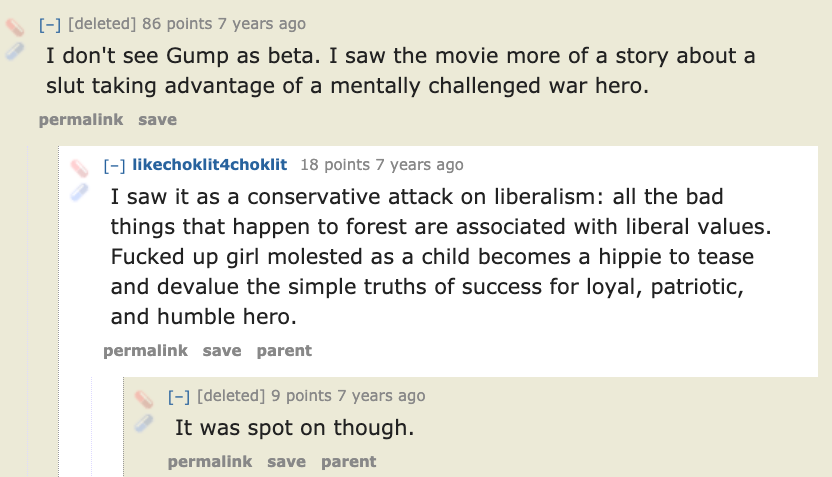 Some will go a step further, arguing that Forrest Gump, with charismatic Tom Hanks as the slow-witted everyman who succeeds through incuriosity and accepts Jenny despite her “body count” (i.e., the number of men she’s slept with), is dangerous propaganda. Over on r/MGTOW, a subreddit for “men going their own way,” a user wonders if Gump is “the Antichrist” and claims that his ex has been influenced by the film, insofar as “she was telling me how she loves Forrest Gump and wants a man like Forrest Gump. The not-so-subtle subtext was she wanted me to be Forrest Gump so she could have power.”

He goes on: “You remember how well Forrest Gump followed orders without questioning things? How well he assembled his rifle in the army? He did exceptionally well at things that dumb people are good at. Mindless, robotic tasks and obedience. Intelligent people tend be [sic] much less conformist. Forrest Gump is an idealized depiction of the mediocre idiot society wants us to be.”

In other words, director Robert Zemeckis had produced a devastating blueprint for heterosexual society, with totally obedient men and promiscuous, free-spirited women who only relate to these automatons in transactional ways.

Indeed, whether an online misogynist considers Forrest Gump to be good or bad comes down to their assessment of its value to the red pill movement. Almost all agree that Gump should have “gone his own way” or “gotten over” Jenny, conveniently overlooking that this mostly unrequited affection is the spine of the film. But while some are too incensed by the plot to enjoy or finish watching, others say “young men should be shown” Forrest Gump to awaken them to the cruel and manipulative qualities of the opposite sex, and a few feel it is designed to weaken or neuter its male audience.

Among the most extreme, hateful critiques hinges on Gump’s low IQ as the basis for his “cuck,” “beta” and “white knight” behavior. “The only way to put up with women’s shit is by being at their level: retarded,” one redditor concludes. There is a small satisfaction in Jenny dying for her hedonism and liberation, though it typically isn’t enough to satisfy the vengeful incel or MGTOW. In the end, even if they admire the cinematic craft, they cannot accept that Gump, for all his achievements against the odds, doesn’t understand or care about the choices Jenny has made. You can almost imagine their ideal alternative cut, where she shows up on his front porch in her time of need, only to have him slam the door in her face.

Movies, particularly touchstones like Forrest Gump, do leave a mark on society. The red pill community’s need to classify it as either a dire warning or attempt at feminist indoctrination, however, displays yet again their reliance on rigid or implausible archetypes to understand the world. They’re watching a corny, mildly conservative nostalgia trip for Boomers — one predicated on quirky coincidences, populated by ciphers and symbols of cultural forces instead of authentic characters — and deciding it explains why their last Tinder match ghosted them. Always blaming the conditions of the sexual ecosystem to avoid taking responsibility, they commit the same mistake as the unfortunately acclaimed film: that the times make the people, and not the other way around.