Ranking Movie Snacks by How Unhealthy They Are

How much will I regret sticking that greasy wiener in my mouth in the back row?

It’s officially summer, which means when you’re not getting sandy in the scorching hot sun, you’re probably going to the movies to see summer flicks like Spider-Man: Far From Home (starring that webslinger who is so a gemini), or perhaps the professional-clown-infuriating It sequel. Whatever it is, you’re probably going to be buying some ridiculously overpriced movie theater snacks while you’re there.

Here’s the deal up front: None of them are healthy, and if you hit up a lot of movies and gorge yourself every time, there’s a good chance that you’ll end up looking a lot more like Fat Thor and a lot less like the tall, chiseled blonde he used to be. Some of these snacks are worse than others, though, so we reached out to Dana Hunnes, senior dietitian at the Ronald Reagan UCLA Medical Center, to help us distinguish the bad from the worse, which we then listed in order from the least unhealthy to the most unhealthy. 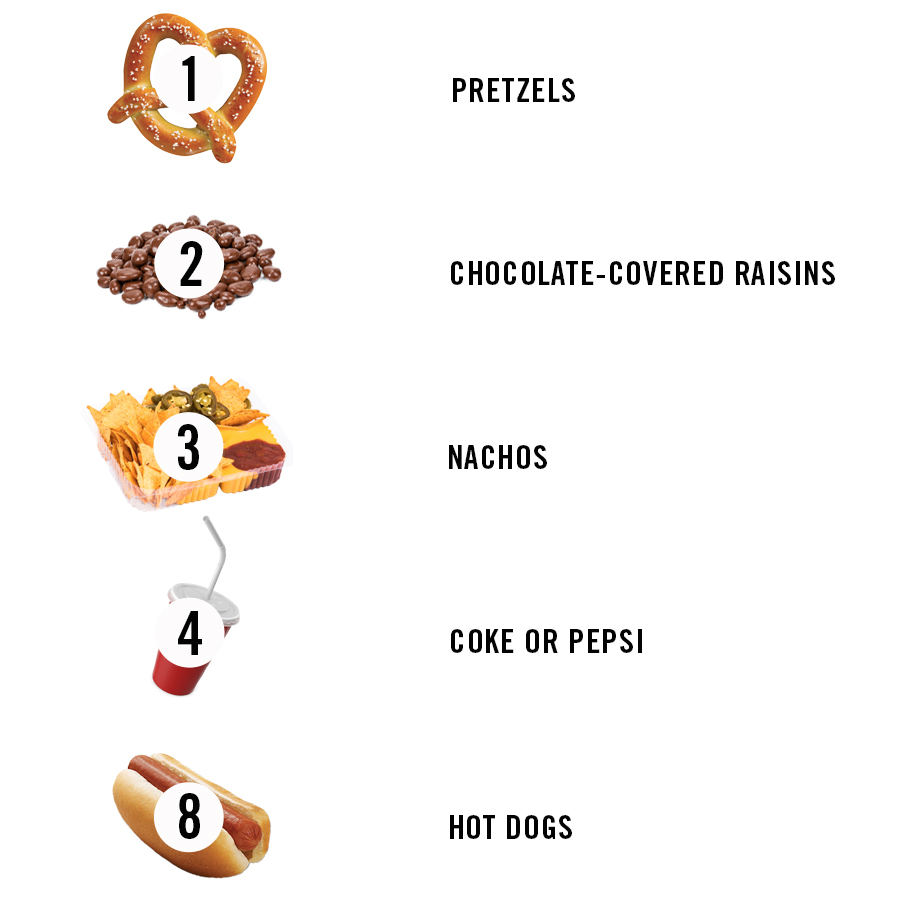 Now that the previews are over, let’s get our rank on.

1) Pretzels: No need to twist yourself into knots over a movie pretzel, as Hunnes says they’re probably the least unhealthy of your typical movie snacks, tending to be lower in calories than most of the stuff on that menu. However, she adds that they are made with refined flour, which doesn’t really offer any health benefits either. Again, technically, nothing’s good for you at the movies, it just varies from bad to worse.

2) Chocolate-Covered Raisins: “These at least have fruit in them,” Hunnes says. With these, you can expect the fiber, antioxidants, iron and calcium that you’d normally expect from raisins, but there’s also the abundance of sugar that comes with dried fruit, plus the sugar from the milk chocolate. Worse than any of that, though, Hunnes informs us that, “Many brands use palm oil to make the chocolate covering, and palm oil is bad for our health and bad for the environment.” That’s because, in addition to being a saturated fat, palm oil plantations have devastated the populations of animals like the orangutan and the Sumatran rhino.

3) Nachos: As you might imagine, the chips aren’t the problem here, because even though they’re salty and made with refined corn, they do have some fiber. It’s the cheese that’ll get you, as it’s packed with upwards of 1,100mg of sodium, nearly half of the salt you should consume in a day — 48 percent — and when you add that to the 21 percent the chips provide, it’s little wonder why these things are bad for you. That being said, there are few things on Earth that are quite as alluring as the unnatural orange glow of nacho cheese.

4) Coke or Pepsi: Hunnes says, “Cola is basically sugar water, unless it’s still made with high-fructose corn syrup, which is a little bit worse than sugar because it’s lipogenic, meaning it can produce more fat cells and affect metabolism. Moreover, many colas contain caramel coloring, which also may be carcinogenic. Additionally, it is thought that the carbonation may leach calcium from your teeth and your bones.” Seriously, though, there is no fucking way by now that you don’t know soda is incredibly bad for you, even diet soda.

5) Twizzlers or Red Vines: Despite that wonderfully waxy texture that comes with red licorice, Hunnes tell us that, “there is nothing inherently good” about it. She adds that, “It has food dyes in it which may potentially be carcinogenic, and is basically otherwise pure sugar with some other additives that are all refined starches.”

6) Popcorn: The iconic movie snack is probably the hardest to rank because it can be made so many different ways. If it was air-popped and with no salt, no butter and no oil masquerading as butter, it would be a healthier choice than even the pretzel, as it’s an unrefined grain (which is good). With no butter and no salt, but popped in oil as movie theaters often do, it’s probably a little worse than the pretzel. But with added salt and butter, popcorn can be pretty damn terrible for you. Most of the calories come from the butter, which is often oil and not butter at all. It’s also high in saturated fat and may even have food coloring and trans fats. We know, you’re still going to eat it, we’re just giving you the facts.

7) Gourmet Truffle Fries: Think that you’re somehow better off if you go to a high-end fancy-pants dine-in theater? Nope. Those pricey truffle fries are just white potato that’s been deep fried in oil or even trans fat, which is definitely not good for your health. As for the truffle flavor, Hunnes says there’s nothing terribly healthy or unhealthy about it, it’s just an expensive oil.

8) Hot Dogs: We know, you likely made your peace with the unhealthiness of hot dogs long ago. That being said, you should be aware that processed meat is a Class 1 carcinogen, which is why Hunnes says it easily makes it the most unhealthy thing at the theater. It also has nitrates and all nitrates are dangerous for health. Let’s not forget the saturated fat and the shit-ton of sodium, either, at 1,290 mg or 56 percent of a daily suggestion. Even then, that’s assuming you down only one of those suckers, which may be a challenge when you’re sitting through a three-hour epic like Avengers Endgame.

All in all, unless you’re smuggling kale chips or carrot sticks into your local cinema, expect your waistline to be affected by an indulgence in really any typical movie snack. Still, while all of this may be unhealthy for you, arguably none of it is as bad for you as spending 59 hours straight in a movie theater with no sleep.